If you missed yesterday's reviews, you can find them here. I was unable to get a copy of Voodoo #2, so that gets left out this time around. 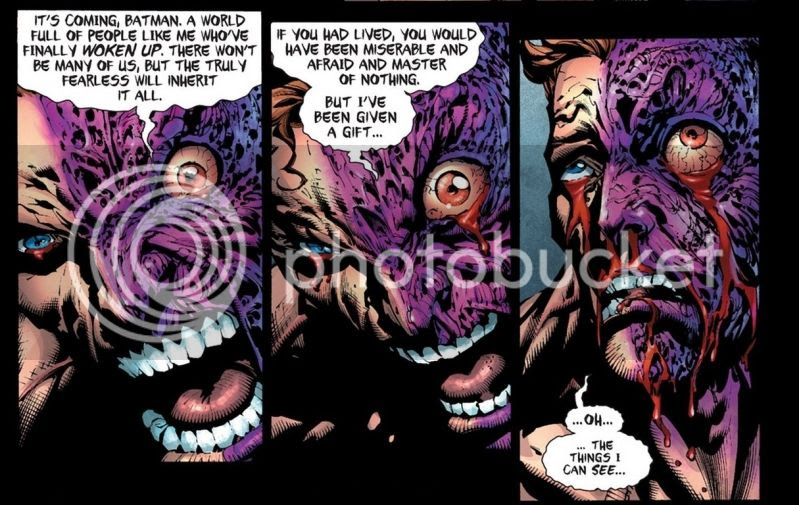 Batman: The Dark Knight #2
Written by Paul Jenkins, Plot & pencils by David Finch, Inked by Richard Friend
This issue is better than the first one, but that bar is not set very high. Batman and Alfred try to discern the source of the drug that removes fear from the mind. Nearly the entire Bat-family cameos, though Robin is portrayed in a thoroughly generic way that doesn't sound the slightest bit like Damian. I can hardly believe that this is the same Paul Jenkins who is doing such excellent work on DCU Presents. Finch's art is his typical stiff and inconsistent work; he does a much better job drawing buildings and machines than he does with people. If you dislike his art, nothing here will change your mind. This series has been only mediocre at its very best, and it  has one more issue to improve drastically, or I'm done with it.
My score: 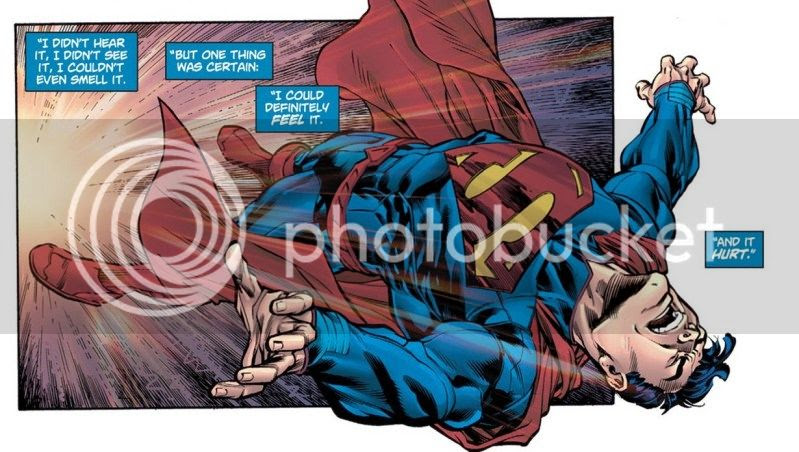 Superman #2
Written by George Perez, Art by Jesus Merino
After the rather lackluster debut issue, my hopes for this second issue weren't very high. Thankfully, it is a bit better, but still seems to be marking time for the most part. Much of the issue is spent watching Superman being hit by a creature that everyone can see except him, and then watching him punch it into submission once he figures out how to work around it. With Perez leaving in a couple of issues, I would expect this story to wrap up soon, but who knows what to expect at this point? So far it seems to be just build-up to something, with lots of arbitrary action thrown in to take up page space. This isn't a bad comic, just a thoroughly mediocre one.
My score:

Blackhawks #2
Written by Mike Cost, Art by Graham Nolan & Trevor McCarthy
After a shaky start last month, this series picks up some serious steam here as the plot moves forward, and we get to see more of the team in action. Things are suddenly getting very interesting in this book, and I'm glad to see it. It's not one of the best of the New 52, but it went from being on the bubble to remaining on my pull list for at least one more month, and on much more solid footing this time. With this issue, it's much closer to the military-flavored, high-stakes action series everyone was hoping for.
My score: 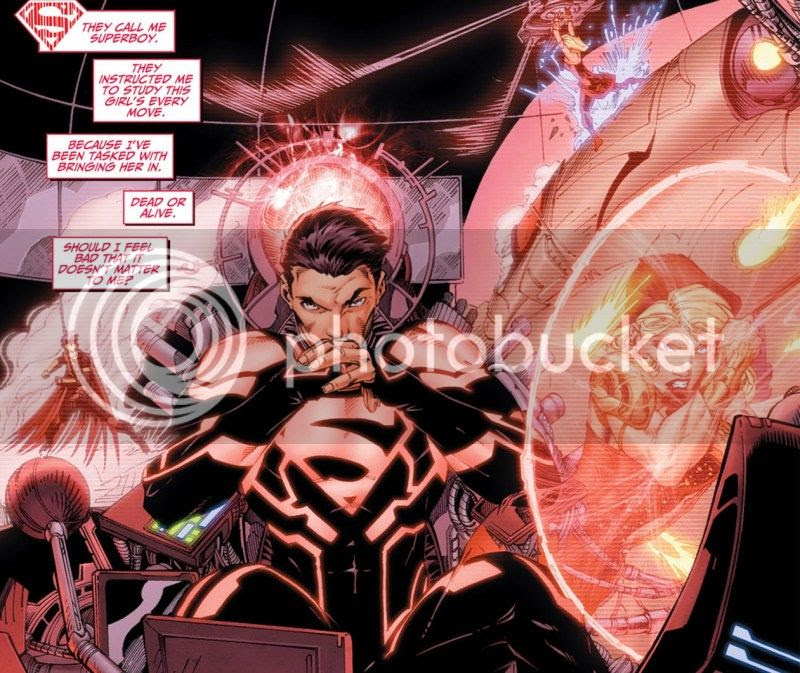 Teen Titans #2
Written by Scott Lobdell, Pencilled by Brett Booth, Inked by Norm Rapmund
Just like the debut issue, this mostly reminds me of so many comics from the early to mid-'90s, for all the worst reasons. There is at least some semblance of a plot, as NOWHERE are trying to round up all the superpowered teenagers, but it's accompanied by inane dialogue and bad art to the point that it's hard to care. The bubble just burst for this book; I'm done with it.  I'm sure some readers will derive some enjoyment from this series, but it's not for me.
My score: 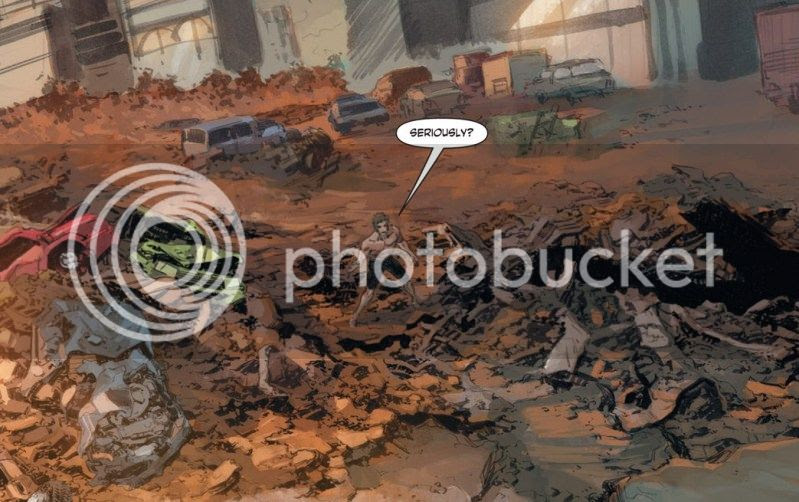 The Savage Hawkman #2
Written by Tony Daniel, Art by Philip Tan
Yeah... the word balloon in the pic above pretty much sums up my thoughts as I read this issue. After a halfway decent debut issue, this one is a muddled mess. There's a big dumb fight at the beginning, a bunch of cryptic things happen, and there are hints of something nasty to come. Tan's art is pretty good, but that's really all this issue has going for it. I had to force myself to finish reading this comic for the purposes of this review, or I would have just stopped about halfway through. I'm only marginally interested in Hawkman at the best of times, and I think this issue ended my time reading this series.
My score: 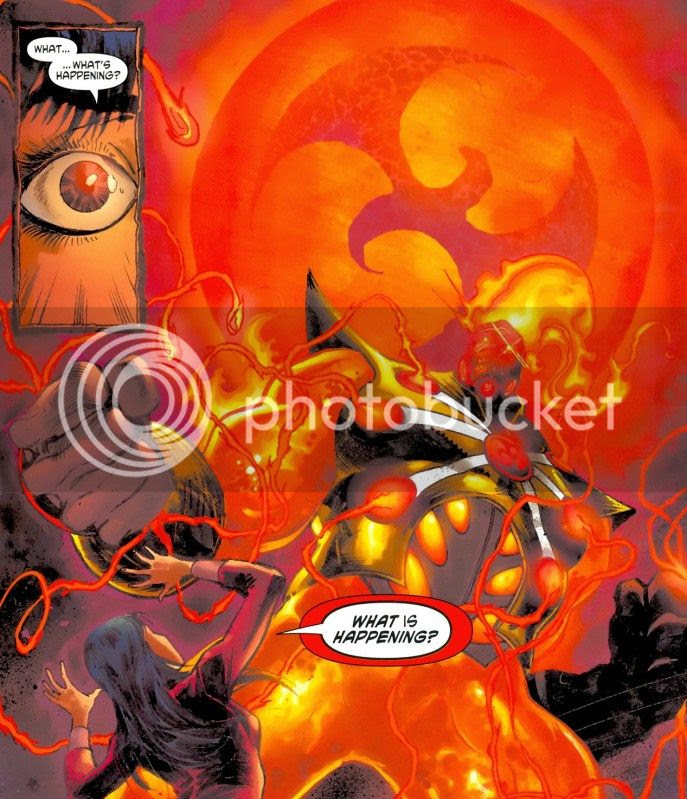 The Fury of Firestorm: The Nuclear Men #2
Written by Ethan Van Sciver & Gail Simone, Art by Yildray Cinar
Things stay nice and crazy as assassins continue to hunt Ronnie and Jason, and the origin of Firestorm is partially revealed. Tonya gets a very disturbing vision of what the future might hold, as well. This isn't one of the New 52's shining stars, but it's a nice, solid superhero adventure book, and there's not a damn thing wrong with that.
My score:

That's it for this week's comic reviews! Pop back by later for today's 31 Days of Halloween post, and enjoy your weekend!
Posted by Waylon Piercy at 11:00 AM