WTF is the deal with the Blacula box?

Okay, so here's the deal: I'm helping a friend of mine sell some stuff online, and while going through some of it Sunday, I was suddenly confronted with THIS. As someone with a lifelong fascination with old horror movies, B movies, and '70s blaxploitation movies, this thing appealed to me far more than is probably healthy. "If you want that box, you need to take it right now, because if I leave this house with it, it ain't gonna find its way back over here," I told him. He didn't want it, so this glorious prize is now mine! the only problem: I have no friggin' idea where it came from. He had similarly gotten it from another friend years ago, and likewise has no clue to its origins. The box gives no indication, and the only text on it (aside from the Spanish on the front) is some copyright info on the bottom. A few Google searches turned up nothing relevant. I like to think that a really nice bottle of liquor was originally housed within it, possibly in a drawstring bag. Who knows?

EDIT: Before this post went live, I did some more digging, and finally found a little information about this box. Evidently, it was intended as a storage box for trading/playing cards. I can't find any other information about it, but at least that lays to rest the mystery of its intended purpose. Even with the central mystery solved, this thing is still interesting enough to share. I certainly feel my home is a bit better for having a Blacula box in it!

WHO is joining the Justice League in April?!?? (Spoiler alert!) 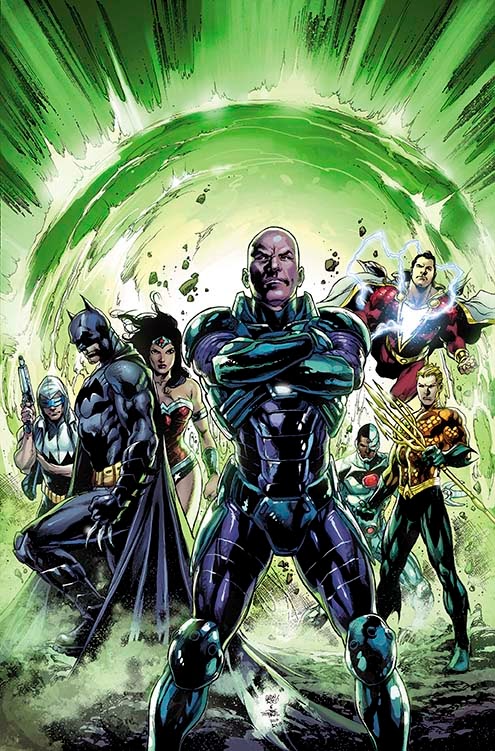 Justice League and Forever Evil  writer and DC bigwig Geoff Johns revealed in an interview earlier today that none other than Superman's nemesis Lex Luthor will join the Justice League in April's issue #30! The team will consist of Batman, Wonder Woman, Cyborg, Aquaman, Shazam, Luthor, and another villain-turned-hero, Flash rogue Captain Cold. For those who have been reading the Forever Evil series, this actually seems like a natural progression, as the series sees Luthor struggling to unite a team that can stand against the Crime Syndicate(evil versions of the Justice League who have invaded from a parellel universe) after they've apparently killed the Justice Leagues. Luthor truly attempting to reform and give the hero thing a go is sure to be fascinating, however long it lasts.

Oh, and in the last line of the interview, Johns tosses this tidbit out: "Ted Kord returns to the DCU in Forever Evil #7, and plays a role in Justice League post-Forever Evil." For long-suffering fans of the second Blue Beetle, this is very welcome news!
Posted by Waylon Piercy at 4:13 PM No comments:

The print edition of NIGHTMARE ESCAPADE is now on sale on Amazon.com!

As noted in this post Monday, Nightmare Escapade is now available in print. Amazon.com got it up on their site a few days earlier than expected, so you can now order from them right here! You can still get it from the link in the previous post too, of course. I'll earn a bit more money from each copy that way, but if you prefer to order from Amazon.com, which is certainly understandable, you now have that option. Expanded distribution of the print copy, including overseas territories and libraries, will be coming in the next few weeks. I've also enrolled it in the Kindle Matchbook program, so if you buy the print copy, you can then download the Kindle version for free! I think that's a pretty great program, so expect to see that for all my books going forward. If you have a Nook or an Ipad or a Kobo reader or something and prefer read in that format rather than via the Kindle app, I'll have you covered there as well in a month or so. Stay tuned...
Posted by Waylon Piercy at 11:00 AM No comments:

For various reasons, I just didn't get as much done last year as I wanted. There were many factors that lead to that, and not all of them were my fault, but the fact remains that I didn't publish anything new, and this blog was largely neglected during the second half of the year. Unless I spontaneously combust or the world blows up or something, we're not gonna see a repeat of that this year. These are my goals for this year. 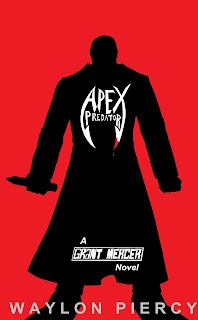 Finish APEX PREDATOR
This is the big one, and the one currently getting most of my attention. I was nearly done with it a few months ago when disaster struck, as you may recall. I was so sick about the whole situation that I wound up taking a break from it for a month or so, though I did work on some other things during that time. I recently dove back into it, and it will be released this year. I'm not sure about a release date yet, and that will obviously depend on when I finish it, but my goal is to have it done by the end of March at the latest. The issue with backing up the file more often is now moot, as I setup Skydrive to automatically sync the file whenever I use it, so it's automatically backed up. Reeeeeaaally wish I'd known about that last year, but there's no use in fretting over it now. What's done is done, and all I can do is charge forward.

Publish print versions of my books
This one has actually happened! I spent the first bit of the year working on getting Nightmare Escapade ready for printing, and it went on sale Monday. Now that I've familiarized myself with the process, it should go much more smoothly when it comes time to publish future books. In the meantime, just having an actual physical copy of my first book sitting on the shelf feels pretty amazing.

Get the local bookstores to carry the print versions of my books
Pretty self-explanatory. We have two bookstores in town that have sections for authors from our region, so hopefully it won't be too tough to make this happen.

Get better at self-promotion
This one is really crucial. My sales are not where I'd like them to be, and the brutal truth is that I'm just lousy at promoting myself and networking with people. I need to really double down and make some serious effort to change that.

Post on this blog more often
This is a problem I tackled last year as well, and I made a big effort to post at least once a week. I stuck with it for a few months, but eventually, things just got in the way, and I began posting less and less. So, I'm going for it again this year. Hopefully I'll do better this time.

These are not all the goals I have set for myself for this year, but they are the major ones. If I can accomplish all of them, I'll consider 2014 a rousing success! If not, well, I figure any year in which I don't die is still a pretty good one. ;)
Posted by Waylon Piercy at 1:30 PM No comments:

Been enjoying your Kindle ebook copy of Nightmare Escapade, but wishing you had a print copy of it to display on your bookshelves, give as a gift for Valentine's Day, smash bugs with, and whatnot? You're in luck! You can now order your very own old-school printed-on-paper copy of Nightmare Escapade! It will be available on Amazon.com in about a week, and via other channels a few weeks after that, but if you can't wait, you can order a copy right now if you click here! (I'll make another dollar or two per copy if you buy it via that link too, so, there's that.)
Tell your friends! Tell your enemies!

Posted by Waylon Piercy at 1:48 PM No comments: