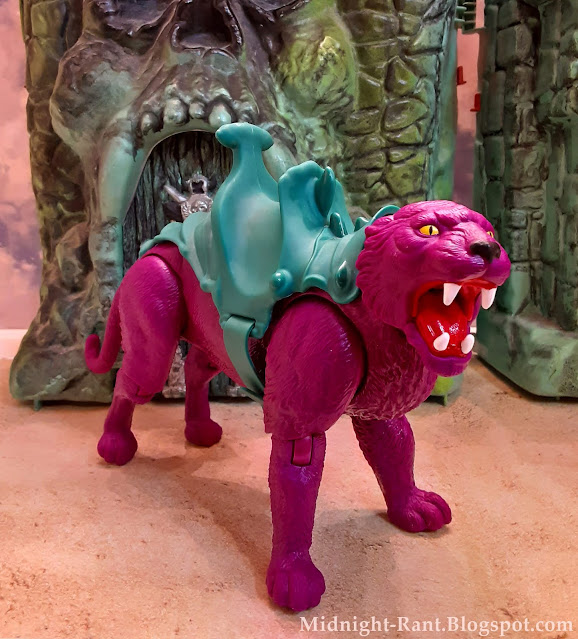 Never as ubiquitous as a certain orange-striped green tiger, Skeletor's purple pawed pal has nevertheless managed to amass quite a following of his own. As I mentioned in my review of Battle Cat, whenever a new MOTU line is launched, Battle Cat will be there to accompany He-Man. To add to that statement, whenever a new incarnation of Battle Cat is produced, you can bet that Panthor will be close behind. Back in the '80s, Panthor at least had that swanky purple flocking to offset his status as a purple Battle Cat, and it also gave him a cool premium feel. With the flocked version of the Origins Panthor relegated to an overpriced Walmart exclusive in the US, the general mass release version, i.e. the version most people will get, is lacking one of the character's main selling points. While this isn't entirely unprecedented-- witness the Classics line's Panthor for evidence of that-- it's still a sticking point for many collectors. How does he fare without that swanky velvety feel? Read on... 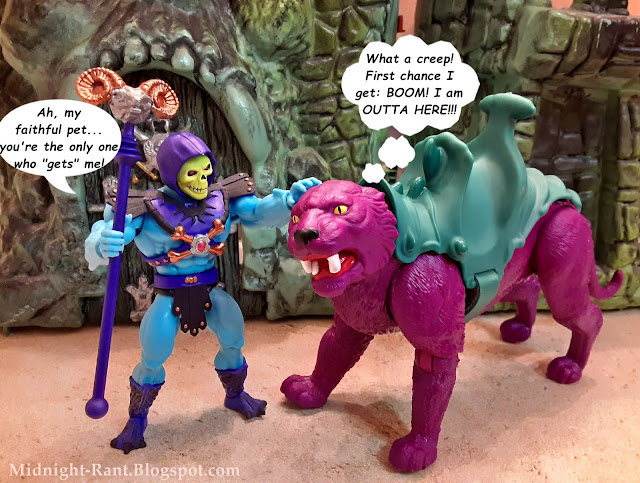 This entire line boasts the general look of the wonderful vintage packaging as a selling point, and that's readily apparent with Panthor. The box art is fantastic, paying homage to the original toy's packaging, and it's also distinct enough to please entirely on its own merits. Again, I am not a MOC collector, but I really have to fight the desire to keep the large items in this line inside their packages simply because they look so damn good! Since Panthor is Battle Cat molded in purple plastic, there's not really anything new to say about the sculpt. It's evocative of the vintage toy, with some sharper detailing, such as much more fur texture. There's also some nice detailing in the mouth, with the tiny teeth between the canines and the bumps on his tongue. 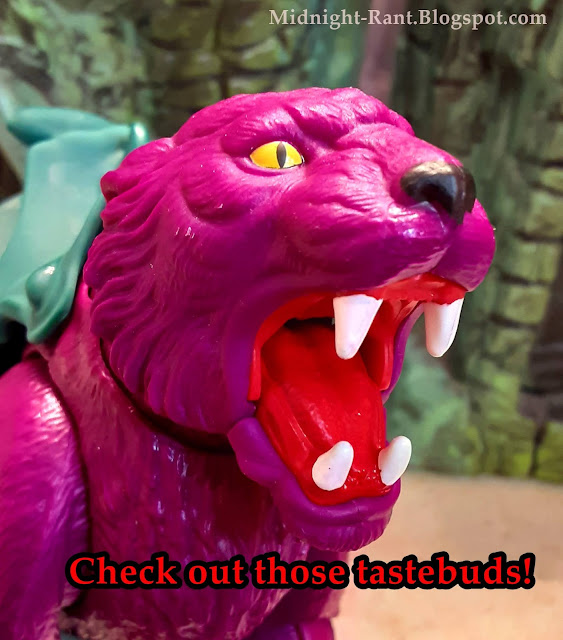 Panthor is almost devoid of paint apps, and the few that are present are neatly done. His yellow eyes with their black slits are flawless, and his teeth have a minimum of slop. There's a nice gloss coat on his eyes and part of his mouth, lending them an appropriate sheen. Gloss is also present on parts of the saddle, giving them a nice "pop." That saddle is Panthor's lone accessory, and it definitely feels rather light. Why not include an Origins version of the helmet the Four Horsemen created for the Classics Panthor? Sure, this line is mostly an homage to the vintage line, but we've seen elements and figures based on more recent incarnations of MOTU that such a thing wouldn't be entirely out of place. As a straight re-use of Battle Cat's tooling, with fewer accessories, and lacking the character's trademark flocking, this simply feels like you're not really getting your money's worth. 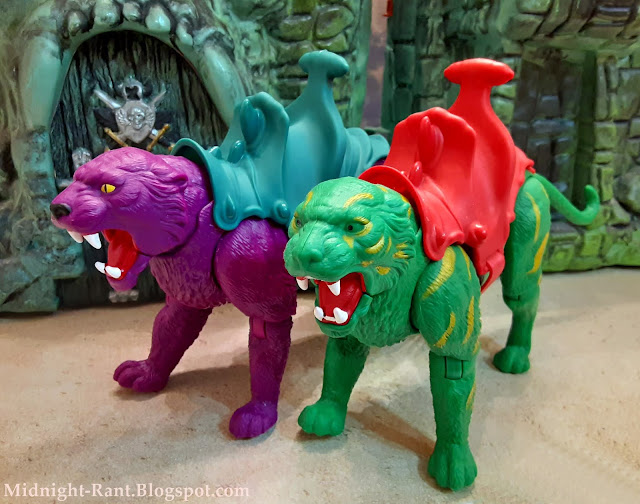 As with his feline predecessor in this line, the articulation is so close to giving Panthor everything he needs that it's very frustrating. He has swivel & hinge tail and knees, swivels at the hips with the barest hint of outward movement, a hinged jaw, and a ball-jointed neck & head. The lack of ankle articulation is a huge issue, imposing severe limits on the poses you can get him into. All that range of motion in the knees is basically useless when the ankles are completely immobile. The range of motion on the head is very good, however, and helps to alleviate his general immobility a bit. The ability to fine tune the head's pose to such a degree adds much to the figure's expressiveness. 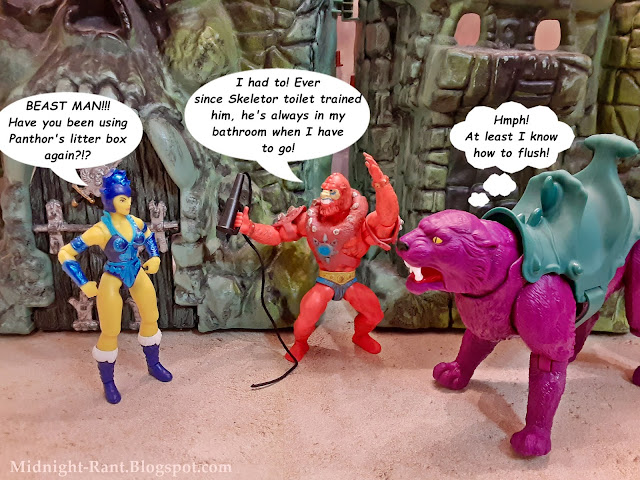 This review probably makes it sound like I regard Panthor as a total turd of a figure, but that's not really true. It's a pretty nice piece, and I'm glad to have it, but as with the other big cat in this line, it's just a damn shame that some questionable decisions by the design team hold it back so much. With a few minor tweaks, this could have been a great toy. As it is, it's just "good enough." If  you are lucky enough to have an extra Panthor from the Classics line, I do recommend that you just dig that out and use it instead. This one is okay, but it's strictly a pinch-hitter. There is also the flocked Walmart exclusive version on the horizon, but frankly, it's overpriced at $40, and I won't be buying one unless I find it on clearance or something. Whichever version you end up with, I don't think you'll regret it, and kids will certainly care far less about the compromised articulation than we adult collectors do. This isn't a bad toy by any means, but it's certainly not what it could have, and should have, been. Let's all hope that the Origins design team will do a better job if and when they get to steeds such as Stridor and Mantisaur! That's it for today, but be sure to ride your stiff-legged feline back this way next week for more! Until then, stay safe out there, and happy hunting! 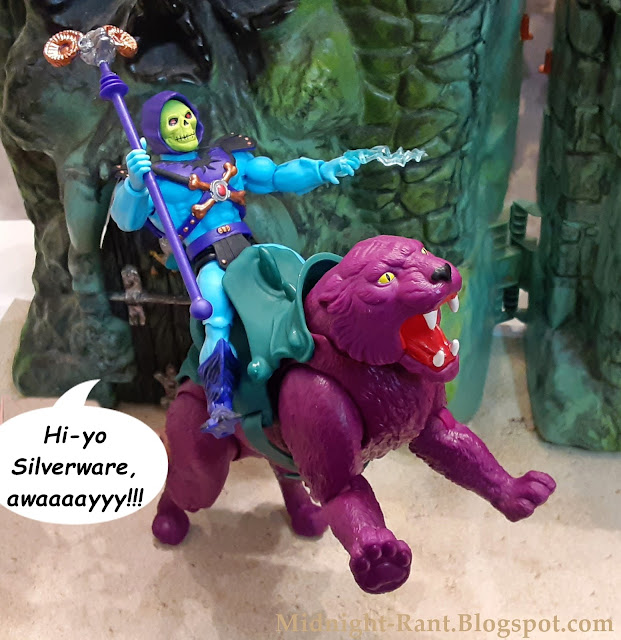