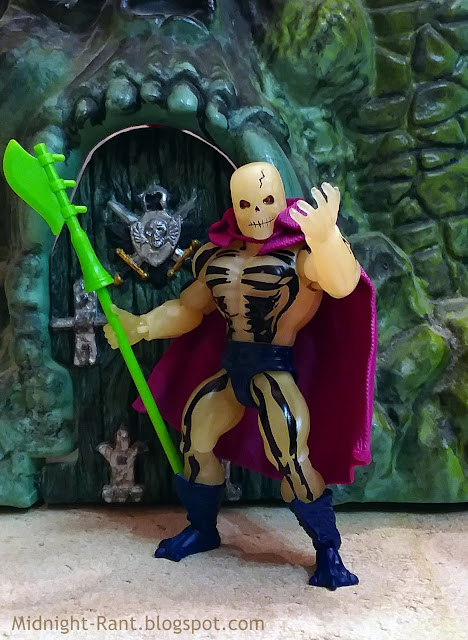 Today we're looking at the final figure from wave two of Mattel's Masters of the Universe Origins line, and one of MOTU's most mysterious characters: Scare Glow! Judging by the chatter online, there is a sizeable presence of people collecting the Origins line who have no idea who this fella is. Coming at the tail end of the vintage line, Scare Glow had a very limited media presence, so this isn't very surprising. That said, he was a skeleton monster who glowed in the dark, so he was much beloved by people who were lucky enough to own one back in the day, and sought after by many who never saw one in person, like me. He also had the somewhat vague title of "Ghost of Skeletor," which led many to question his origins, which only enlarged his mystique. This, coupled with his relative rarity, led to him gathering a large following over the decades since the vintage line's demise. In recent years, this has seen him elevated nearly to A-list status when it comes to MOTU merchandise, as he now is among the first characters to be produced in most any MOTU venture. His spot on the roster of the upcoming Netflix series will surely raise his profile even further. Mix this together, toss in a pinch of Walmart's less than stellar handling of the line's distribution, and you have a big ol' steaming "Why the hell can't I find this figure anywhere??!?" pie. A mysterious villain, a fan favorite, a scalper's dream... But does the figure measure up to his hype? Read on... 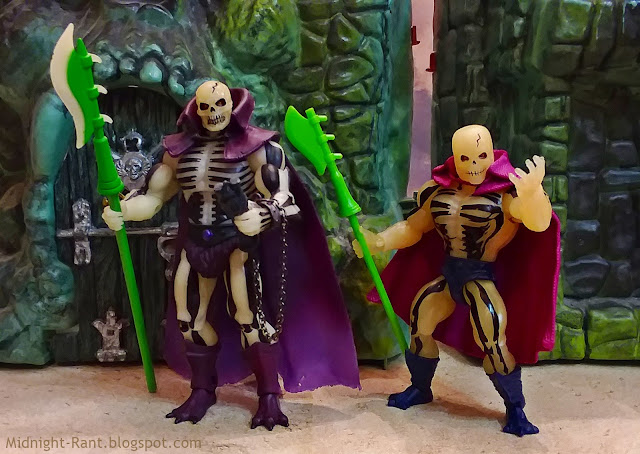 Scare Glow's sculpt is no surprise to anyone familiar with how MOTU lines tend to work. As with every previous iteration, the figure is Skeletor from the neck down, topped off with a new head. The sculpting is quite good overall, following the line's general standard of recreating the vintage sculpts with slightly sharper detail. The head has some nice detailing that's slightly tough to see, given the type of plastic used, and the lack of anything beyond basic paint apps. The boots remain a standout on this body, sharply detailing what was only hinted at with the vintage figures that made use of the Skeletor legs. 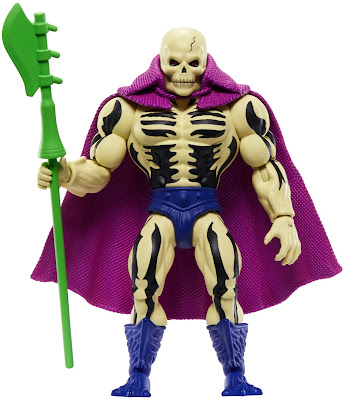 Paint is a bit of a sore spot with this figure. Aside from issues with the general design-- see the photo above for a look at the prototype, which many feel had torso and arm paint apps that were far better designed than those of the actual released figure-- there are multiple areas that have not been filled in completely. (See the photo below for examples.) It's shame, because the paint apps are nice and sharp otherwise, with the shapes of the "bones" clearly delineated without slop or overspray. Some of the bone designs are just weird. 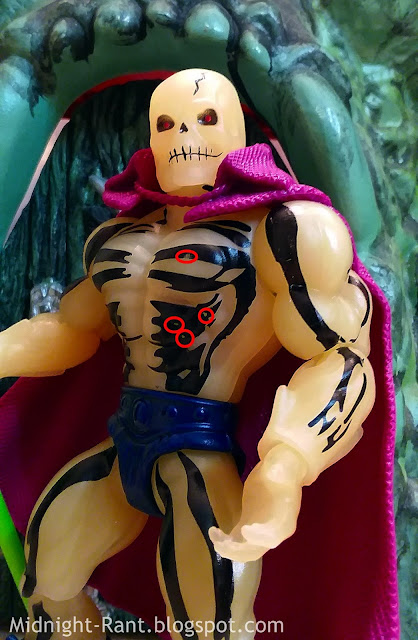 Articulation is standard for the line, with swivel & hinge shoulders, elbows, wrists, hips, knees, and ankles, swivels at the waist and boot tops, and a ball-jointed head. It's a very nice articulation model that I continue to like quite a bit, and the easy part swapping is appreciated. 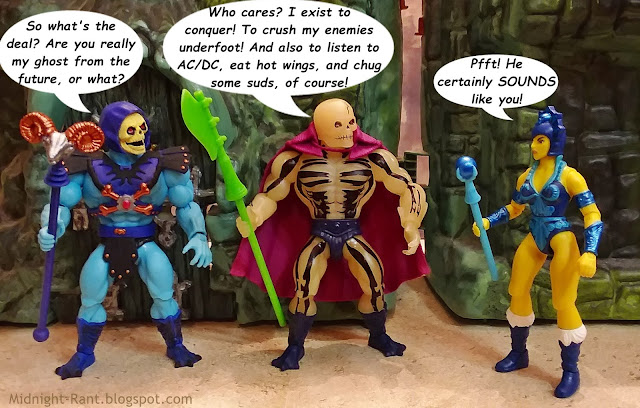 Scare Glow has his usual accessories: His Scythe of Doom, so called despite it being a halberd, and his removeable cloak. The cloak is particularly nice, made of a soft, pliable plastic, with a sculpt that gives it the appearance of fabric. It would have been a very nice surprise for them to include the Grayskull reliquary that originated with the Classics figure, but as this is primarily a vintage-based line, I can understand its absence. The wave two minicomic is also included, and while I still feel the page count is too small, it is an improvement over the first one. 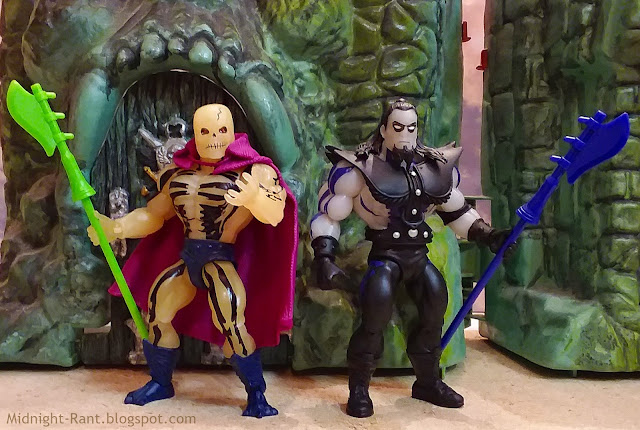 Scare Glow is one cool figure, make no bones about it. He has definitely been overhyped, and over-scalped, to the point where the figure itself is being overshadowed in all the fuss. At its core, this is a cool toy, whether or not you knew who the hell he was when wave two was announced. The furor over his extremely messy release is sure to die down after Xmas, when the general shopping frenzy subsides. If nothing else, we have only twenty short days until this line will be carried by other retailers, and hopefully wave two will be well-stocked and plentiful. Just be patient, and don't lose your head over trying to get this cool toy. I have a feeling that most people who are paying through the nose for it will be sorely disappointed in a month or so, when they stock is more easily available, and the prices come tumbling down. In the meantime, just keep checking Walmart's website, and you may just luck out. this will likely be the final review for 2020, so until the new year, enjoy whatever holiday you happen to celebrate, happy hunting, and stay safe out there! 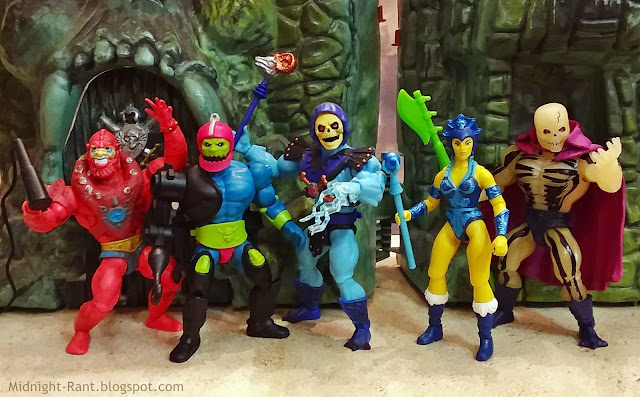 Posted by Waylon Piercy at 10:46 AM No comments: 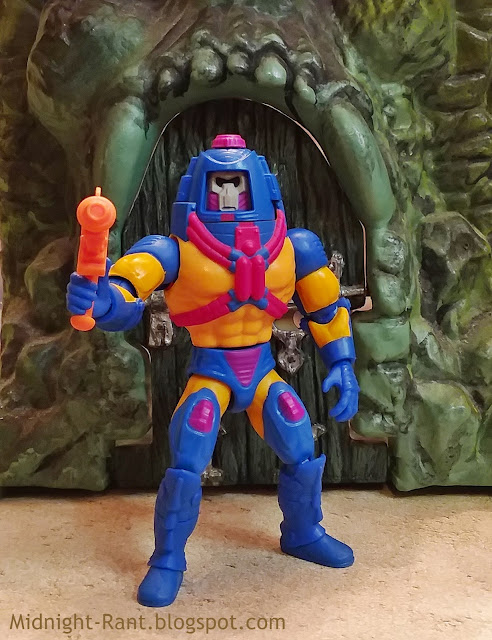 We're rolling right along with Mattel's new-ish Masters of the Universe Origins line! Today, we're taking a look at the master of disguise-- as long as you only look at his face, that is--Man-E-Faces! I've written before about my initial disappointment when first finding the vintage figure, though I quickly grew to like it quite a bit. I still always held a preference for the figure's design on the cross sell art, however. In a line that is based primarily on the vintage figures, is this one bound to disappoint? Only one way to find out! 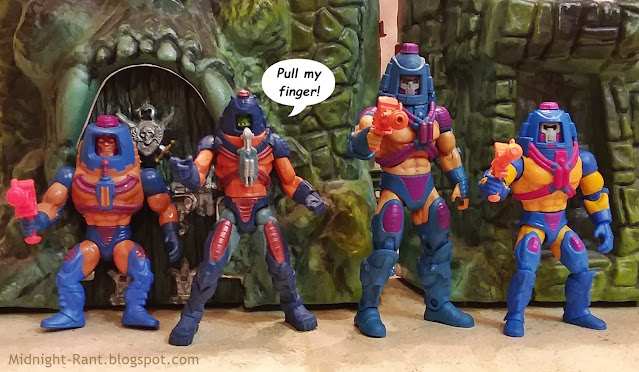 Man-E's sculpt is mostly unique, though he does share legs and part of his left arm with Trap Jaw, as usual. This sculpt breaks away from the vintage figure more than the other figures we've seen thus far; whereas most may have a different head or a few tiny details that differ, Man-E features numerous details that deviate from the original figure. The overall effect is closer to the vintage cross sell art in many ways. This is most obvious with the upper set of piping, the area where the headgear attaches to the body, and the figure's back. Collectors who want these figures to be literally the vintage versions with added articulation may be disappointed by this, but I quite like the changes in the sculpt. They allow for more detail, and frankly, I think it's just a better design. I want this line to draw from the original cross sell art and prototypes in cases where it can improve the final figure, and I'm glad to see they did that here. On a somewhat odd note, Man-E has no nipples. If you assume the yellowish areas are supposed to be his skin, this throws things off a bit. (The vintage version had them.) This is obviously not a big deal, just a little oddity that's worth pointing out. The sculpting in some areas is noticeably softer than with the vintage figure, however. This is most obvious with the monster and robot faces, but this persists in areas on the legs and arms, as well. It's particularly disappointing to see this on a figure's face(s), as that makes it impossible to overlook. The sculpting team really needs to tighten up and ensure this doesn't become a trend with this line. 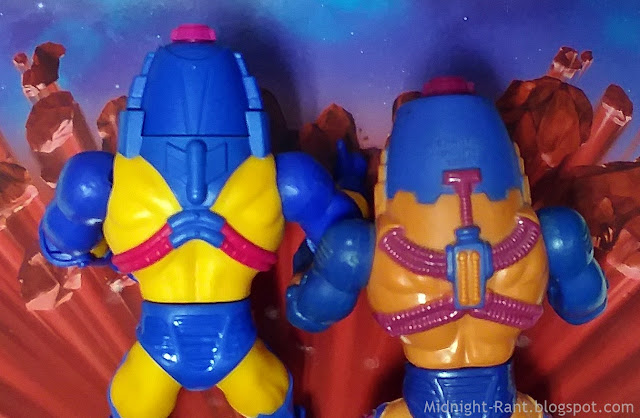 Man-E's paint apps are crisp and neat, particularly for a kid-friendly mass retail line. This is particularly evident on the faces, where the paint apps, minimal though they are, have been applied pretty much perfectly. As is common with this line, the colors are much brighter overall than previous Man-E-Faces figures. The skin, in particular, if far brighter than the vintage figure. Some Man-E-Faces figures in the vintage days had bright pinkish-purple piping, but none had skin this bright! You definitely won't be getting this one mixed up with the vintage version! One area where they skimped is on the interior of the figure's elbows. Owing to a different joint design, when his arms are straightened, there's a large blue area in the middle of the "skin" of his arms! It looks very odd, and Mattel really should have applied some paint here to make it blend with the rest of the arms. Man-E's lone accessory is his gun. It's a good deal smaller than the vintage gun, and I find that this smaller scaled weapon looks better with the figure. The sculpt is very detailed, and the design is tweaked a fair bit from the vintage version. The standard wave two minicomic is also included. 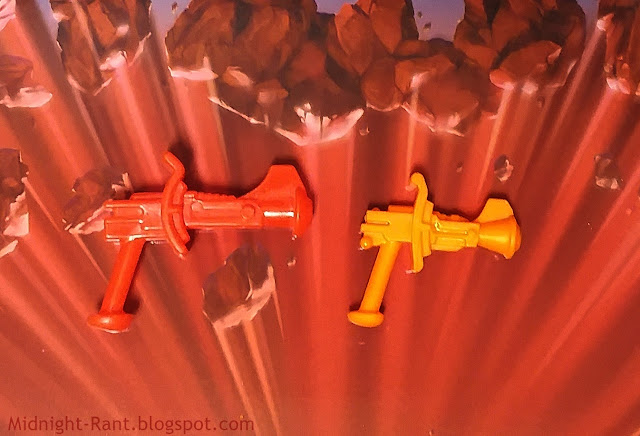 Man-E's articulation differs a bit from most of the figures in the line, owing to his design. He has the standard swivel & hinge shoulders, elbows, wrists, hips, knees, and ankles, and waist swivel. His elbows are constructed differently, but they have the normal range of motion. The ankles are limited by the design, as previously seen with Trap Jaw. The biggest difference, obviously, is Man-E's head. Due to the figure's design, this is limited to a swivel, with an independent interior swivel for the faces within it. The 2002 and Classics figures both featured a similar design, but it works a bit better here. It appears that the head is not designed to be removed, unlike the line's other figures. It can still be removed if you really want it off, of course, but it won't pop on and off easily like the others. Even with the limited range on some of the parts, this remains a very good articulation model, and I like it quite a bit! 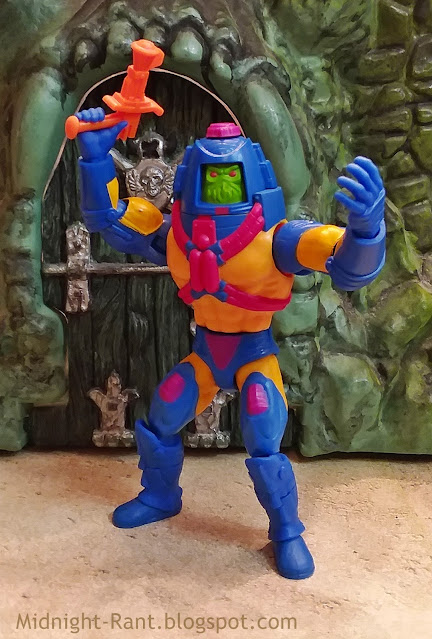 Even with a few drawbacks, Man-E-Faces has emerged as one of my favorite figures in the line to date. Once I have the chance to do some repainting, he'll be even cooler! A cardback colors version is definitely in the works once I manage to grab an extra. Keep checking Walmart.com if you haven't had any luck yet, as he continues to pop in and out of stock at maddeningly random intervals. If all else fails, at least we'll be able to find these figures at other retailers in a few short weeks! Scroll down for more photos, and be sure to pop in next week for the next review! Until then, stay safe out there, and happy hunting! 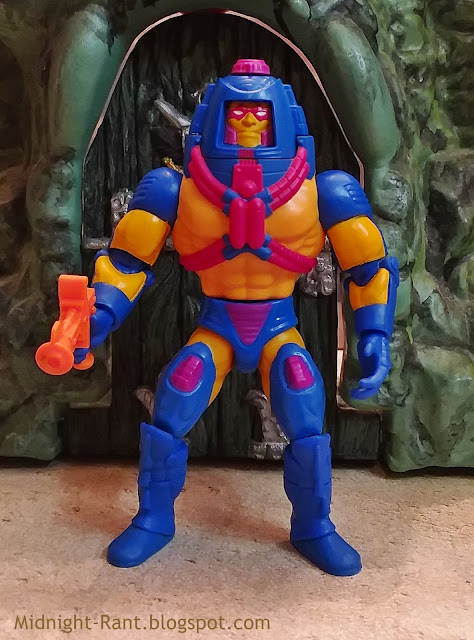 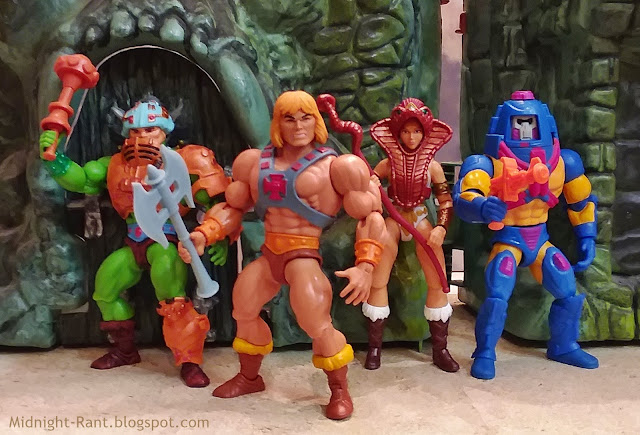 Posted by Waylon Piercy at 11:12 AM No comments: