The title may be a little perplexing to some of you, so let me clarify: those decorations you've probably seen in a few stores that are basically some sort of monster head on a line with a long piece of fabric hanging from it to give the illusion of a body? I call those monster muumuu heads. I've picked up a good many of them, and we'll be checking 'em out today! 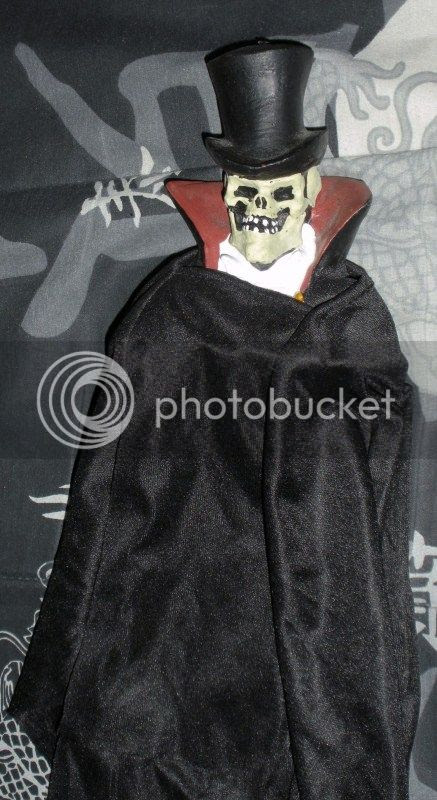 This fella is probably my favorite of the bunch: the Gentleman Skeleton! I came across several pieces of mostly unrelated merchandise featuring this type of character all in the same week a few of years ago, and I got it all. for some reason, I was captivated by this character, though I think part of the fascination was the odd coincidence of finding basically the same character on different merchandise at different stores all around the same time. It's almost like I was meant to stumble across this character. The Gentleman Skeleton strikes me as a jaunty character who tries his best to put a jolly, positive face on being a psychopathic murdering ghoul. You gotta respect that, eh? You'll be seeing more of the Gentleman Skeleton later this month, don't worry! 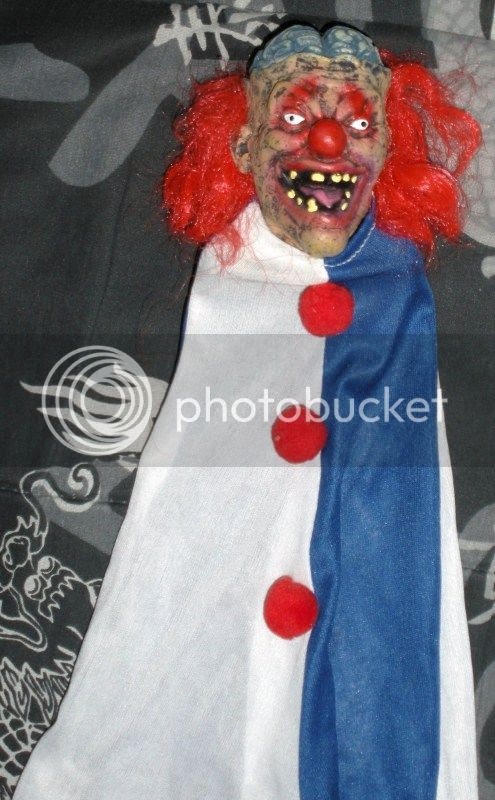 I dubbed this clown Esteban de la Murderface, mostly because he's ugly enough that looking at him may well kill you. The split skull revealing his brain, the leathery skin, the jagged hillbilly teeth... what's not to love? 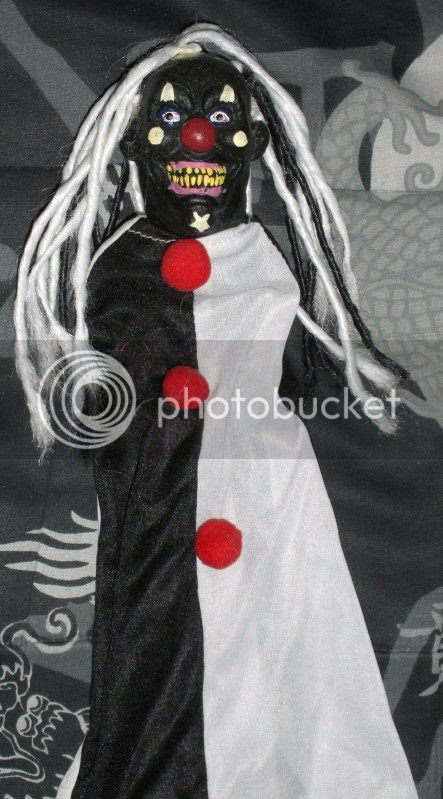 Killy McGee here is Esteban's partner and best buddy. Shockingly, both of these guys came from Walmart, the one year in recent memory when they bothered to have a decent Halloween section. 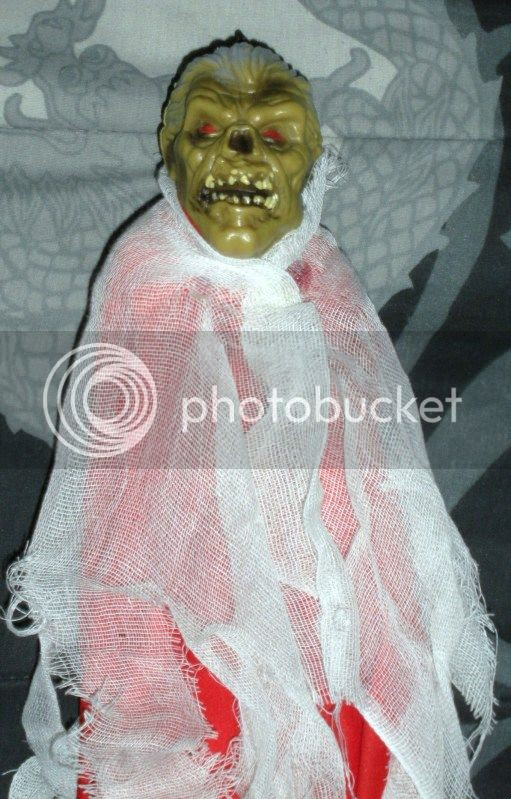 Zombie Robert Mitchum here stands out with his swanky red muumuu, which draws the undead babes like flies, I'm told.

This vampire was probably intended to be Dracula, but he's lacking that certain something that would make him believable. Therefore, I've decided that he must actually be Dracula's less successful brother, Dracularry. 'Larry, as we'll call him, is a much sloppier eater, more in the vein of Christopher Lee than Bela Lugosi. As a result, he is covetous of the bib that is possessed by the next one... 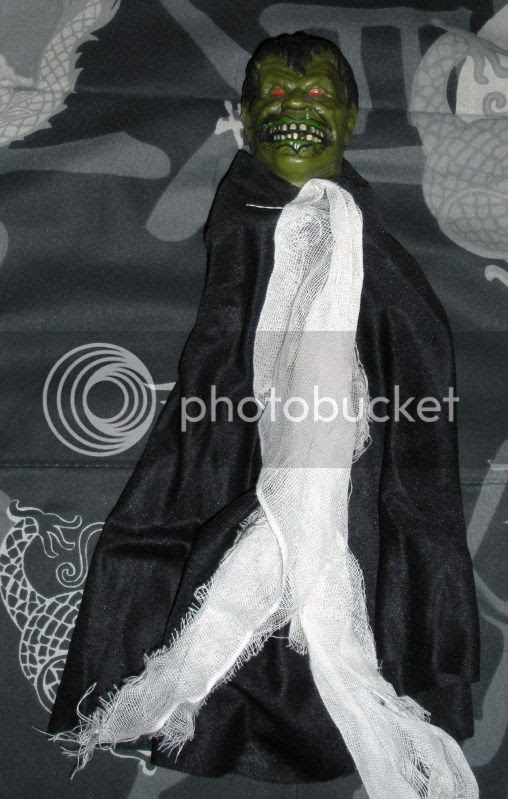 ...Zombie Hulk! Yeah, I know this is probably supposed to be the Frankenstein Monster, but when I look at him, I see Zombie Hulk. He flaunts his bib in Dracularry's messy face without fear of reprisal, because Dracularry is the kind of vampire who doesn't like confrontations. 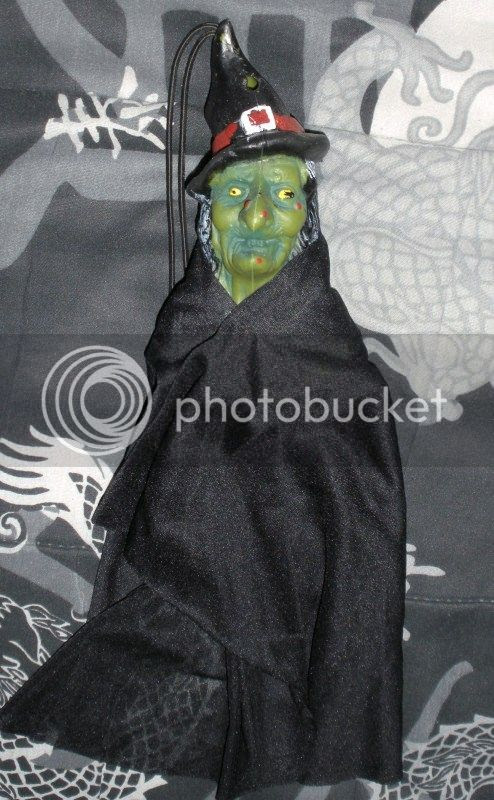 Even ghouls gotta have babes, and I guess this witch qualifies. I randomly started calling her Bernadeth, just because it seems like a good name for a witch. She has a hole in her hat, which I imagine pisses her off to no end, since her clothes seem pretty immaculate otherwise.

I figure this extra-desiccated Grim Reaper is probably one of the previous incarnations of death who is now kickin' it at the retirement home. He just doesn't look capable of carrying out death's duties anymore, know what I mean?


These muumuu heads are cheap, fun ways to add to your Halloween display. I don't see them around as often anymore, but they can still be found if you're willing to look. That's it for today, see you back here tomorrow for more haunted Halloween happiness! (Remember, I love alliteration!)