31 Days of Halloween: The Immortal Count- The Life and Films of Bela Lugosi

Happy birthday to Bela Lugosi!
One year ago today: Werewolf of London

Years ago, when I was working at Books-a-Million, I came across a newly-arrived book. It instantly caught my eye, as the cover image was my favorite photo of Bela Lugosi as Count Dracula. (Perhaps you'll recognize it!) It was a thick, weighty tome, shrink-wrapped in clear plastic. I wanted to unwrap the book and look through it, but the book was priced out of my range, and I'm not one of those jackasses who opens a book or a magazine when I don't intend to buy it. Reluctantly, I placed it back on the shelf, but I didn't forget about it. That book was Arthur Lennig's The Immortal Count: The Life and Films of Bela Lugosi. 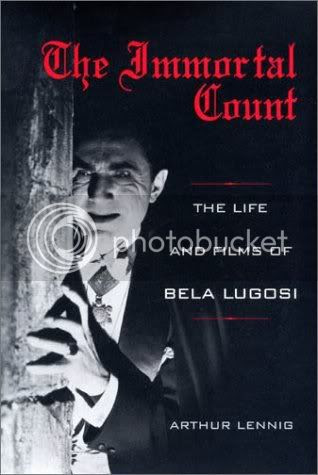 It took me a few years, but checking on amazon.com regularly eventually paid off, and I found a good used copy for a cheap price. (About $8 if memory serves; that's only about $4 per pound!)

The biography represents literally decades of research on Lennig's part; he even visited Hungary to search for and peruse the relevant records.He even had the good fortune to meet Lugosi, and spend a little time getting to know him. (You bet your ass I'm jealous!)

This biography is exhaustive, and dispells a good many myths and misconceptions that have accumulated around the Lugosi legend. Not one era of Lugosi's life is neglected, from his childhood to his utterly tragic death. Lugosi's stage work, from Hungary to Broadway,  his five marriages and his affair with Clara Bow, his friendship with Ed Wood; it's all here, covered in greater detail and accuracy than ever before.

One thing the biography has been consistently criticized for is Lennig's tendency to spend too much space synopsizing Lugosi's films, and i am inclined to agree; presumably, anyone who is a devoted enough Lugosi fan to read this book is very familiar with his film work. However, I consider that a minor flaw, as the summaries can be easily skimmed or skipped over if they bother you that much. Lennig does display the rather annoying habit of making Boris Karloff out to be some sort of anti-Lugosi archfiend; for whatever reason, many fans who prefer one of these iconic actors to the other feels the need to tear the other down, which makes no sense at all. Lennig appears to feel this way, as he never misses an opportunity to take a shot at Karloff.

Those gripes aside, this book is still an invaluable resource for fans of Bela Lugosi. It is the definitive book pertaining to his life, and given all that went into its creation, I don't see it ever being topped in that regard. Highly recommded.
My score: