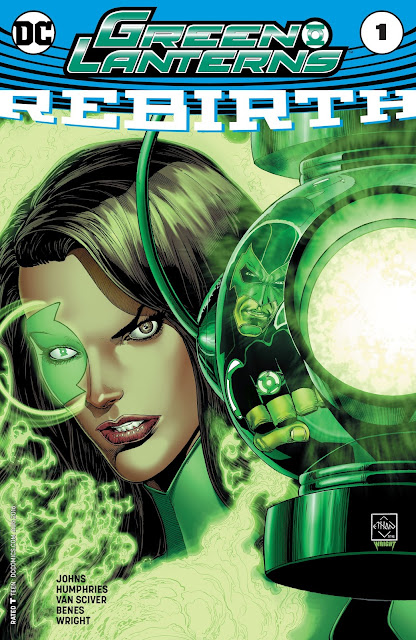 As you're no doubt aware, DC's Rebirth initiative is currently well underway. Like apparently everyone else, I loved the DCU Rebirth special, and I've been sampling quite a few of the new series. And by "quite a few," I mean "all." I won't be doing full reviews for everything like I did with the New 52 relaunch, but I thought it would be fun to present an overview at the end of each month with a few thoughts about each issue. As always, discussion is welcome, whether here or via email or the social media of your choice. We'll be tackling them week by week, jotting down my thoughts after reading each week's issues. I want to preserve that sense of spontaneity, so you might find that these aren't quite as polished as my usual reviews. (Not that I ever obsess over that, given the casual tone I strive to maintain here, but you get what I'm saying.) So, let's be off!

June 1
Batman Rebirth: Incoming writer Tom King is handed the baton by outgoing writer Scott Snyder, while the incomparable Mikel Janin provides sumptuous visuals. While the story is rather choppy and uneven, it gives us Duke's formal induction as one of Batman's allies, along with a very interesting revamp of the Calendar Man. I enjoyed all the other Rebirth issues this week more, but this is still no slouch.

Green Arrow Rebirth: I must admit that I haven't read any of Benjamin Percy's run on the New 52 Green Arrow-- I read the Lemire/Sorrentino run, but was quickly driven away by the next couple of issues-- but I have heard some good things. I may need to track those down, if this is any indication. Percy and artist Otto Schmidt do a marvelous job of evoking the Ollie we know and love, even while reuniting him with Black Canary for the first time in far too long. This isn't just a nostalgia trip, either, as the conflict that is set up within these pages promises to be quite interesting. I've missed Green Arrow for most of the past decade-- the character's poor handling predates the New 52 by several years-- and it feels damn good to have him and Dinah back.

Green Lanterns Rebirth: Simon Baz and Jessica Cruz finally get the spotlight to themselves as they're partnered up to protect Earth. Incoming writer Sam Humphries, assisted by the sorely missed Geoff Johns, give us a nice solid issue that makes me hopeful that I'll once again have at least one Green Lantern series to look forward to again.

Superman Rebirth: Peter Tomasi & Patrick Gleason, partners on the beloved Batman and Robin, are going to do similarly great things for Superman, judging by this issue. One of the highlights is a recap of pre-New 52 Superman's epic battle with Doomsday, rendered by the always excellent Doug Mahnke. This is one of the issues that is most likely to be confusing for brand new readers, but the team does a good job of explaining what's happened without getting too bogged down in details. 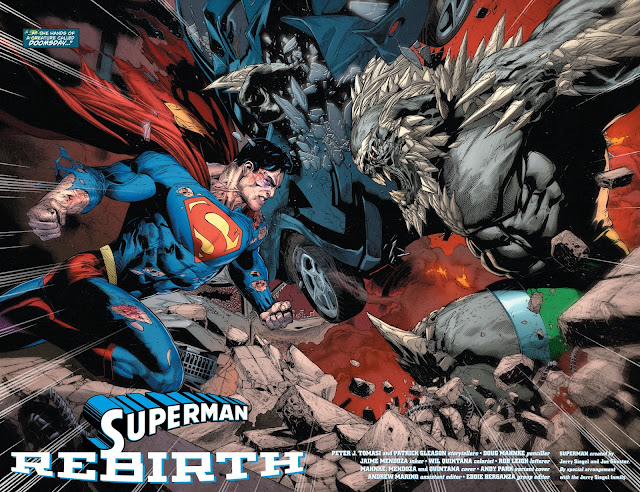 June 8
Aquaman Rebirth: An excellent overview of who Aquaman is and his current status quo, this issue also clearly sets up the main conflict for future issues. Dan Abnett has been doing a great job on Aquaman these past few months, and that hasn't changed. 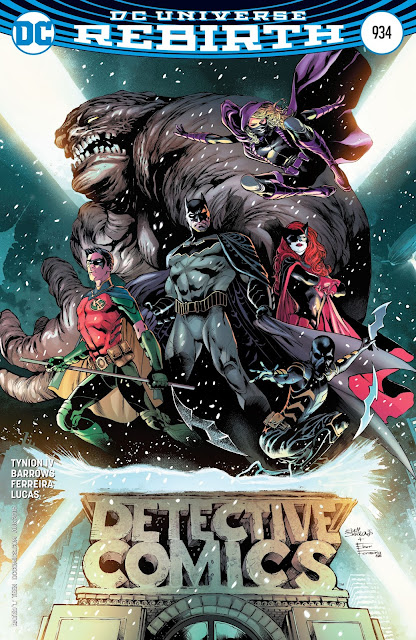 Action Comics #957: Dan Jurgens is riding high writing Superman once again, and he throws so much at us in this issue that it's tough to catch your breath! Luthor having the audacity to attempt to fill the deceased New 52 Superman's cape is completely in character, and given the last couple of years' developments, one can't help believing that he might actually be sincere. Zircher's art is quite nice, and the action flows well from panel to panel. This one is a winner.

The Flash: It was great to see the bombshell DCU Rebirth followed up on, of course, but it was just a damn solid comic all around. Definitely the best Flash comic I've read since before the New 52 began.

Wonder Woman Rebirth: A slower-paced, thoughtful issue that sets up what promises to be another epic Rucka run. Sharpe's art was gorgeous, and I liked how his art kicked in with the costume switch, symbolic of the transition from New 52 to Rebirth.

Detective Comics #934: I really enjoyed this issue. I'm all for a Bat family series, and Batwoman operating as Batman's partner is awesome. I've really missed Kate the last few years. When this series' premise was announced, it seemed very odd that Tim would be among the trainees, but this issue makes it clear that he is operating at Batman and Batwoman's lieutenant in helping to train Orphan, Spoiler, and Clayface. This is a great setup with so much potential!

June 15
Batman #1: A decent issue that is packed with action, but it's only a moderate improvement over the Batman Rebirth special. Finch's art is a little better than usual, but that's not really saying much. Of all the Rebirth issues thus far, this series remains the weakest. That said, I'm still enjoying it, and given Tom King's track record, I'm hopeful that it will improve. 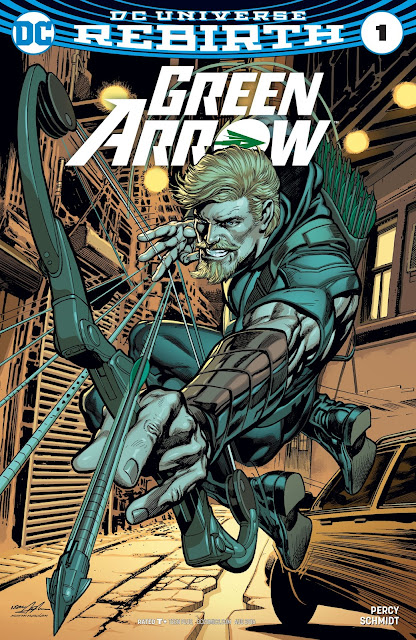 Green Arrow #1: Rock solid issue, picking up right where the Rebirth special left off. Percy has indicated that he's basically riffing on The Court of Owls for this story, and that becomes abundantly clear in this issue. It's also worth mentioning that the recent Black Canary series is referred to again. Many readers, myself included, would prefer that series to be swiftly forgotten, but it doesn't look like that's happening just yet. That's not a mark against this series, just something I felt was worth mentioning.

Green Lanterns #1: Pretty good issue, setting up some very interesting conflicts for the future. I've seen many readers express concern over Humphries as the writer, as he doesn't exactly have the best track record, but so far, so good.

Superman #1: A good issue from one of my favorite creative teams, though it did seem to end far too quickly. Gleason is a criminally underrated artist, and his skill really shines in the body language he gives young Jonathan. His poses and movements look very authentic, and that's one of the toughest things for any artist to convey, particularly when it comes to children. Though it felt a bit short, this was an issue I really enjoyed, and I have high hopes for Superman with this team at the helm.

Titans Rebirth: Abnett did a very good job reviving the classic Teen Titans within the New 52 continuity with Titans Hunt, and that continues right here, as Wally returns and the team gradually regains their memories of him. As for the art, well... let's just say that I'm not a fan of Brett Booth, and leave it at that. That said, he did a great job with the design of Wally's new costume. It's also damn nice to see Dick back in his classic black and blue Nightwing costume. I actually liked the New 52 red and black version that got so much hate, but the blue just suits him better. Of all the Rebirth series, this might be the one that I'm most interested to see where it goes. 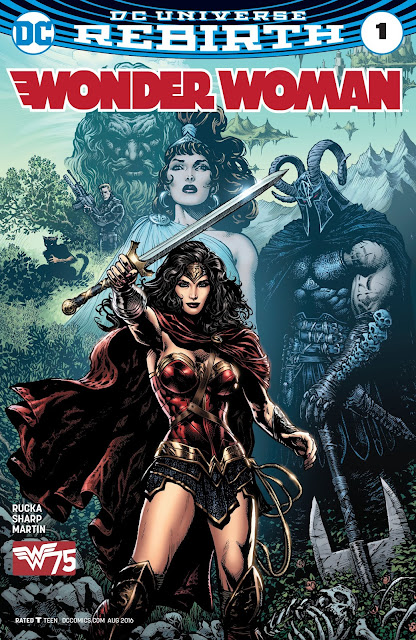 Wonder Woman #1: I still can hardly believe Rucka is back! As writer of one of the two or three greatest Wonder woman runs I've read, I have high hopes for this series. Liam Sharpe's art is gorgeous. Not a whole lot actually happens in this issue, but it still comes off feeling momentous. I can only imagine how good it'll be once things really start rolling!

The Flash #1: Offers a pretty good overview of Barry's life and motivations for new readers, and sets up a damn good hook to hang the rest of this story arc on. The art has an appropriately kinetic quality to it that brings the story to life in just the right way. It's damn nice to have a good Flash comic to read again!

Detective Comics #935: Damn solid issue that ramps up the stakes a good bit, with some nice character development, to boot. Barrows is doing a great job with the art. This also has what is probably the best spin on the old "hi-tech training room" standby that I've seen. This is definitely the better of the two main Batman series right now.

Action Comics #958: Jurgens & Zircher deliver an all-out brawl between Superman and what appears to be the original Doomsday. The presence of post-Forever Evil heroic-ish Lex Luthor makes this much more than a standard rematch, though. This series is shaping up to be a lot of fun!

Aquaman #1: Abnett & Walker do a good job on this issue, advancing the Atlantean Embassy plot that's been running for the last few months, even as Black Manta strikes! Aside from the brief "DC You" period of this series' previous volume, Aquaman has been a very strong book for the past five years, and it seems that will continue to be the case with Abnett at the helm.

Since there are no Rebirth issues coming out today, that brings us up to date. So far, Rebirth has been an amazing success, in stark contrast to the New 52. That saw some great sales spikes for a few months, but amid all that, there were quite a few readers being alienated by the content and quality of the comics. Rebirth seems to be accomplishing its goal of luring all those people back, along with new readers, and its sales numbers are exceeding those of the New 52! Only time will tell if this success will continue in the months to come, but things look very promising. There is an overwhelmingly positive buzz around DC that I haven't experienced in quite a long time.