One year ago: The Body Snatcher

Today is Mummy Monday-- I do so love my alliteration-- and we'll be taking a look at some of my Halloween stuff that is mummy-themed! 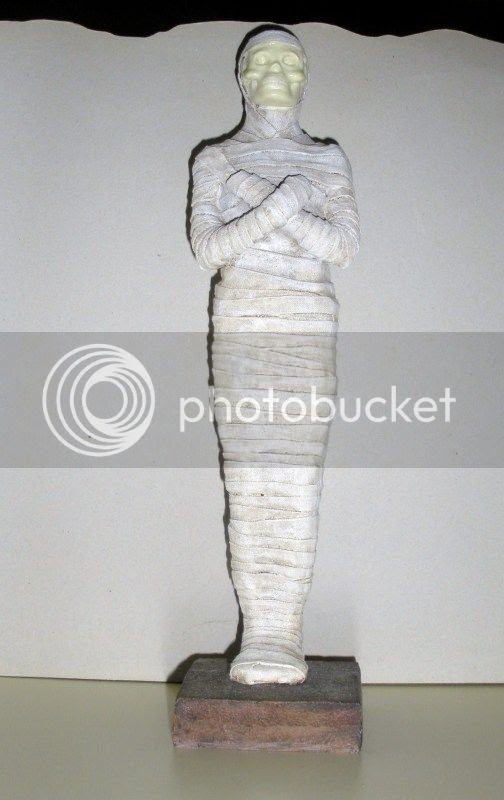 First up, we have this mummy statue that I stumbled upon a few years ago at a local closeout store. It was the middle of summer, so it was rather surprising. It's got some heft to it, and the bandages are nicely detailed. On top of that, the exposed skull glows in the dark! This statue isn't one of the most impressive pieces of horror-related things that I have, but I like it quite a bit anyway. I like to think that it's like a monster version of an Academy Award, and maybe sometimes a bunch of them even get together to hand them out. and then try to kill each other. 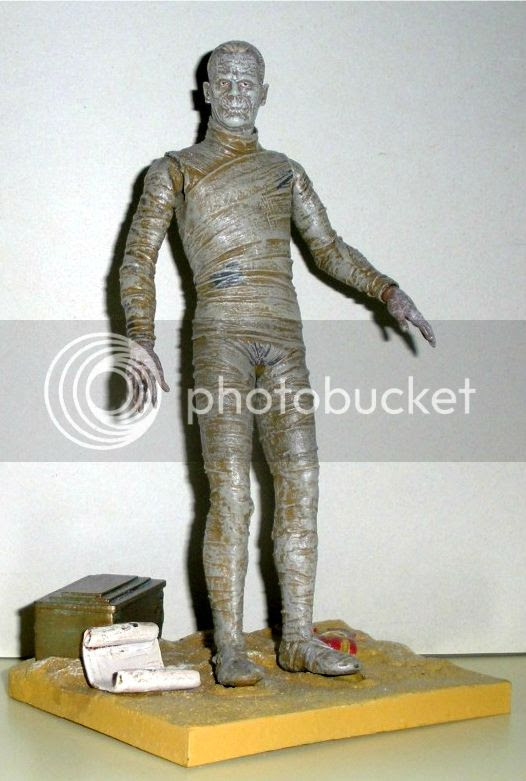 This distinguished fella is the Mummy figure that Diamond Select released last year. I was unable to get the online version that came with that badass sarcophagus, but I like this one a lot on its own merits. He doesn't have his arms sculpted in a folded-across-the-chest position like the online version, so he's free to be posed in a less passive position. Diamond calls this an action figure, but it's more like a plastic statue; the only articulation is at the neck, shoulders, and wrists. This severely limits the posing possibilities, but it does preserve the excellent sculpt. I admit that I was pretty annoyed that his left hand fell off when I opened him, but at least a dab of gorilla glue fixed that. I'm not gonna be taking him down and staging adventures anyway, so I don't really miss the articulation much. I do wish he had a ball-jointed head though, as that adds so much to the possibilities. You can give several different meanings to an otherwise static pose when you're able to do fine adjustments to the posture of the head. Still, the overall sculpt is great, the Karloff likeness is good, and they knocked the paint job out of the park. This is one that I keep on display year-round, not just around Halloween.

I brought this home from an expedition in the bowels of an ancient pyramid a few years back--- oh all right dammit, I got it on clearance at the Spirit Halloween store a couple of years ago. They mark everything 50% off the day after Halloween, and I scored this (along with another uber-cool decoration you'll get to see later this month) for only $12. The detail on this head is awesome, and it's one of my favorite decorations. It gets a place of honor in the middle of the arch that leads to the bathroom every year. 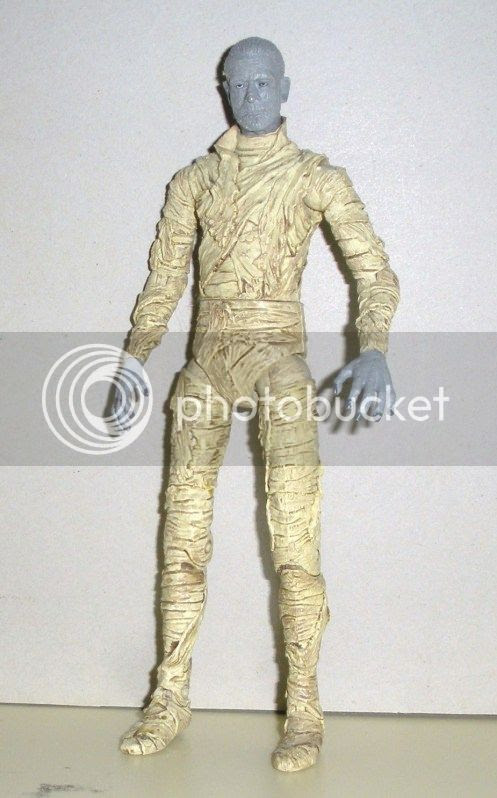 Finally, we come to this Mummy action figure from several years ago. A company called Toy Island released a set of figures licensed from Universal, each of them sporting a good bit of articulation. They came in cool coffin-shaped packages, and each one included a display stand with some pretty awesome poster-style background art, and a build-a-figure piece. The insane amount of trouble I had getting my hands on most of these is a story for another time, but we'll be looking at several figures from this set this month, so maybe it'll get squeezed in with one of them. For now, let's take a good look at this Mummy. The face only vaguely resembles Karloff-- there was speculation that Toy Island had not licensed the actors' likenesses for this line-- but they did a pretty good job overall. He does look a bit like he's wearing a diaper, but there's a lot of nice detail here nevertheless. The paint job isn't that great, although they did make his head and hands a different color, as they were unwrapped in the movie, which is some nice attention to detail. This guy doesn't look nearly as cool as his Diamond Select counterpart, but he does have many more posing options. This Mummy doesn't get brought out of the box as much anymore, but he's still pretty cool.

That's it for today, pop back by tomorrow when we'll be looking at our first classic horror movie of the month!
Posted by Waylon Piercy at 1:30 PM