It really doesn't need to be restated that Bram Stoker's Dracula is one of the towering classics of the horror genre. It has been alternately derided and lauded, and analyzed nearly to death. But for all of that, a hell of a lot of people still haven't read it. It's easy to understand why. Its format and the style of prose can be off-putting even to those who read regularly. Stoker presents his story via a collection of journal entries, letters, and  newspaper articles. conveyed in the florid prose typical of the era. The story is full of plot holes and inconsistencies. Even so, Stoker's novel remains a fascinating work, and it continues to resonate more than a century after its publication. Buried within those letters and journal entries is a ripping good yarn, well-worth the time it takes for modern readers to immerse themselves in those pages. I've read the novel a few times over the years, and this time around, I decided to read Leslie Klinger's The New Annotated Dracula. With access to Stoker's notes, as well as the manuscript for the novel, it promised an unprecedented inside look at the workings of the novel. Unfortunately, I cannot recommend this edition. 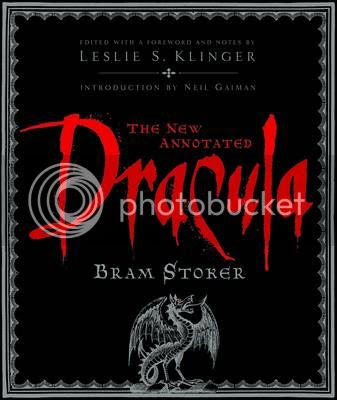 Klinger approaches this annotated edition as if Stoker was merely relating actual events; this gets very annoying by the second page of the novel. After page one, there are literally six pages of annotations, some of them conveying information that is completely inconsequential. This persists throughout, although the annotations do not overtake the actual novel to that extent again. The "gentle fiction," as Klinger puts it, of pretending the novel relays actual events, means that many of the annotations are worthless speculations about where or when such-and-such event actually occurred, and how Stoker changed the facts to protect identities. Often, the reader is not sure whether an annotation is real, or merely invention to support Klinger's "gentle fiction." This is perpetuated even in the supplemental chapters. As Klinger had access to Stoker's manuscript and notes in preparing this edition, it seems a gigantic missed opportunity. What should have been a truly magnificent volume is instead a frustrating reading experience. .

For anyone who wishes to read Stoker's novel with some quality supplemental material, I recommend sticking with the Norton Critical Edition. Dracula itself remains as interesting as ever, and I can think of few things more appropriate for this day than spending a little time with this novel.