I'm hard at work on Apex Predator, which is eating up much of my time, so this week's post is just a few interesting odds and ends.

My man-crush Dr. Neil deGrasse Tyson did an AMA focused on the upcoming revival of the Cosmos TV series!

Here's a cute story about a cat who inadvertently raised nearly $1000 for charity.

You can check out some old weird flash cards featuring toddler versions of DC Superheroes here. (Wonder woman's outfit is really disturbing on a one year-old!)

Finally, the Inauguration Station (character creator) for Saints Row 4 went live on Tuesday, so you can go ahead and get your character ready for when the game comes out on the 20th! You can even download your character from the third game and re-upload them for use in SR4 if you like. We've only got about a week and a half before it's here! If you're super excited for the game and also ridiculously rich, there's a special edition you can pre-order for $1 million. It actually sounds like a bargain!

That's all for this week!
Posted by Waylon Piercy at 3:36 PM No comments:

Has it been three weeks already? Time flies when you're splitting your time between writing a novel and generally goofing off. 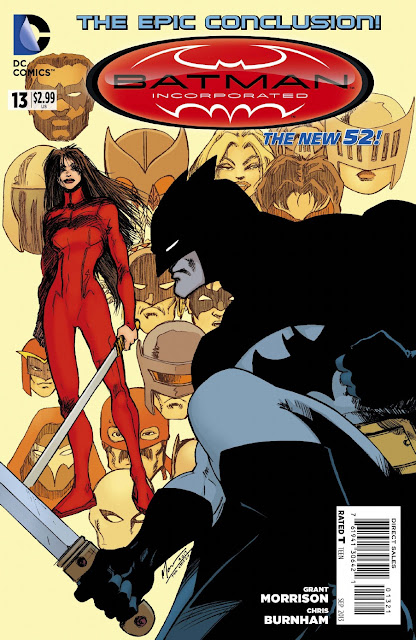 Grant Morrison's epic seven-year run on Batman ended Wednesday with the release of the final issue of Batman Inc. (The image is the variant cover Morrison himself drew.) Yeah, it was awesome. I'm not about to give anything away, but I will say that the finale was more low-key than most readers were expecting, yet the book paid off emotionally in the best possible ways. There are echoes of every phase of Morrison's run, and Batman's overall history, and several enticing threads for other creators to follow up on if they so choose. The final page, in particular, makes me wish Morrison was planning to return in a year or two to follow up on some of them himself. Chris Burnham's art is gorgeous, of course. Morrison's run is already regarded as one of the finest ever featuring the character, and I think that, as time goes by, it will be recognized as the greatest Batman run of all time.

Here's a look at the recently-completed New Century Global Center in China, now the largest building in the world.

Believe it or not, Morgan Freeman was once young.

A group of scientists and engineers working on the Mars Curiosity Rover mission did a very interesting AMA a few days ago. Guess who else did one? The Most Interesting Man in the World, bitches!

On that note, I'm outta here! Hopefully I'll be back in less than three weeks this time.
Posted by Waylon Piercy at 11:30 AM 2 comments: