It's been about six months since my last post; that's easily the longest I've gone without updating the blog. It's due to various things, including some health issues which, unfortunately, are ongoing. I'll be making an effort to post more regularly, though, so the few dozen regular readers who are still here can rest easy. ;)

Today, we're taking a look at one of the sets from The Lego Batman Movie theme, Clayface Splat Attack. Unlike most sets, which tend to be focused around a building or vehicle, Clayface is the set. It's a great design, clearly influenced by the BTAS design, and the build is fun and well thought out. Clayface has an extra arm, so you're free to switch one out if you prefer two of the stud launchers 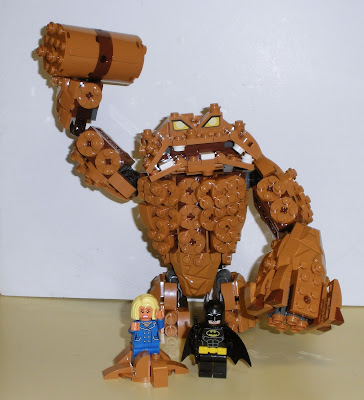 instead of the hammer arm. You'll also have plenty of small brown pieces left over that you can use to customize your Clayface a bit, which is a nice touch. (You'll have even more if you disassemble the arm you're not using! My Clayface, seen here, has quite a few bits added on. As always, click on the photo to embiggen.) With ball joints at all key connection points, Clayface is well-articulated, and he can hold a variety of poses. He is top-heavy, however, so you'll have to use a bit of finesse to find that sweet spot that will allow him to remain upright with some poses. The only issue I have with the final build is that some of the gray parts are clearly visible, which doesn't fit with the character's usual aesthetic. It would have been nice if these pieces had been cast in a shade of brown so that they didn't stand out so much, but that is a relatively minor gripe.

Batman and Mayor McCaskill minifigures are included, along with a small clay trap to ensnare a minifig of your choice. (This, of course, can also be disassembled if you want more little brown bits to add on to your Clayface.) McCaskill goes well with the GCPD minifigs in a display, and be aware that the small mark on her face isn't a defect, but a "beauty mark" that is supposed to be there. Aside from some slightly different facial expressions, Batman is no different than the numerous other Batman minifigs you already have if you've been buying the TLBM sets. It's a damn good minifg, and I like having some extras to pop into various displays, so I definitely don't mind getting another. Plus, you can hardly fault TLg for including Batman minifigs in their Batman sets!

Clayface Splat Attack is easily one of my favorite sets from the TLBM series to date, a standout in a fantastic lineup. Recommended.
Posted by Waylon Piercy at 2:36 PM No comments: