One year ago: Nosferatu: A Symphony of Horror 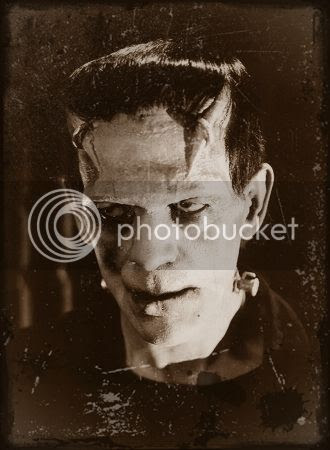 Nearly two centuries after its publication, Mary Shelley's novel Frankenstein remains relevant. The ongoing controversies regarding such matters as cloning and stem cell research were all anticipated by Shelley's remarkably prescient novel. As great as some film adaptations have been, none of them come close to covering the same amount of ground as the novel. The story had its genesis in a summer retreat that included Mary, her husband-to-be Percy Bysshe Shelley, Lord Byron, and Byron's Smithers, John Polidori. (Polidori's The Vampyre, which featured the Byron-esque Ruthven as the titular bloodsucker, was the other notable work to emerge from that retreat.) A challenge was issued that each of them would write a scary story, and Mary based hers on a terrifying dream she had. This eventually developed into the novel Frankenstein as we know it.

Percy went over the novel before it was published, adding the florid prose that he was famous for, to help make the book more marketable. Ironically, it is this aspect of the novel that serves as the largest stumbling block for modern readers. (I have been wanting to read this edition of the novel, which jettisons Percy's contributions. I wasn't able to get my hands on it in time for this Halloween season; maybe next year!) It can get very tedious at times, particularly for a reader who is unaccustomed to writings from that era. However, I truly believe that the tale of Victor Frankenstein and his doomed creation is worth the effort. The Monster is one of the most tragic figures in all of literature, and he is the heart of this novel, not his callous creator. The novel is a bit of a slog at times, but it's worth it in the end. You'll be hooked by the time the Monster has met with his creator and brought him up to speed regarding his trials and tribulations. From there, the pace quickens, and events hurtle headlong toward their tragic conclusion. The novel is essential reading for fans of classic horror, and it is sure to amaze with the parallels between the issues raised in its pages, and those present in our society today.
Posted by Waylon Piercy at 1:30 PM