31 Days of Halloween: The Wolf Man 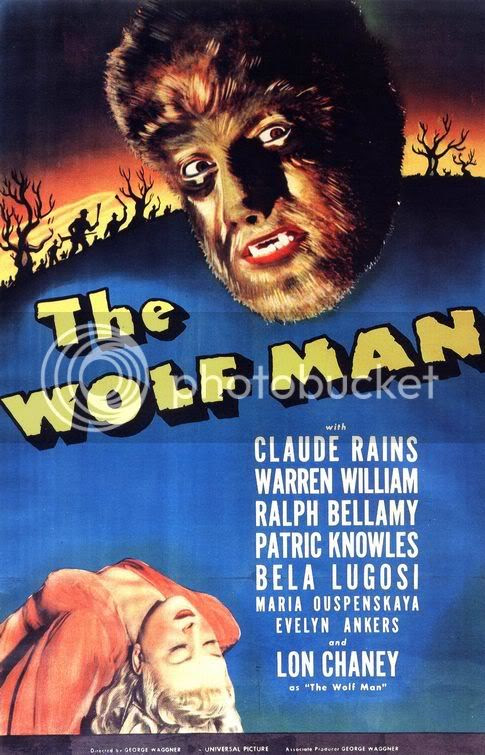 The Wolf Man was the last of the great Universal Monsters, at least until the Gill Man made his debut in The Creature from the Black Lagoon more than a decade later. Unlike the Frankenstein Monster and Dracula, there was no literary antecedent for Universal to draw from in creating the Wolf Man. (They didn't take much from their earlier lycanthropic effort, Werewolf of London, either. We'll get to that one in a couple of weeks.) 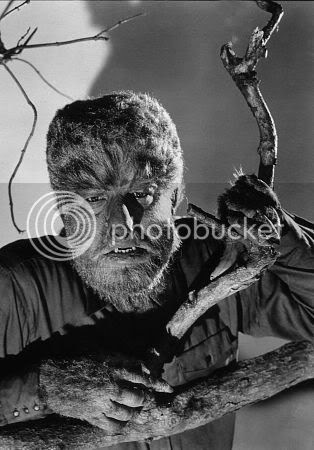 Universal turned to writer Curt Siodmak, who is solely responsible for much of what is now accepted as traditional werewolf lore. The use of a silver-tipped weapon to kill a werewolf? That came from Siodmak. A werewolf being marked by a pentagram? Siodmak. The "Even a man who is pure in heart..." rhyme, frequently (and erroneously) referred to as a part of traditional gypsy folklore? Pure Siodmak. 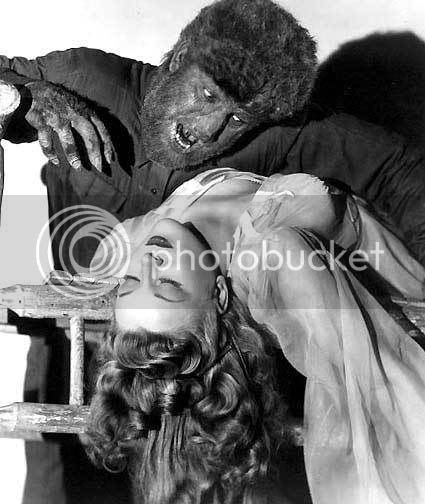 The werewolf transformations are not linked to the full moon in this film; in fact, we never once see the moon at any point in the film. The transformations seem to occur at certain times of the year, as referred to in the final line of the gypsy rhyme. This would change with the sequels, though. 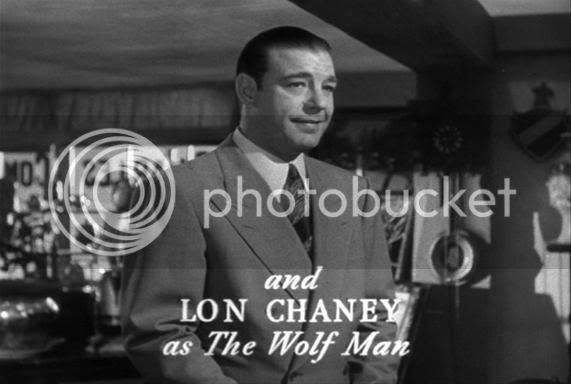 The plot of The Wolf Man is simple enough: Larry Talbot returns to his ancestral home following his brother's death. He is bitten by a werewolf, then becomes one himself. Mayhem ensues. 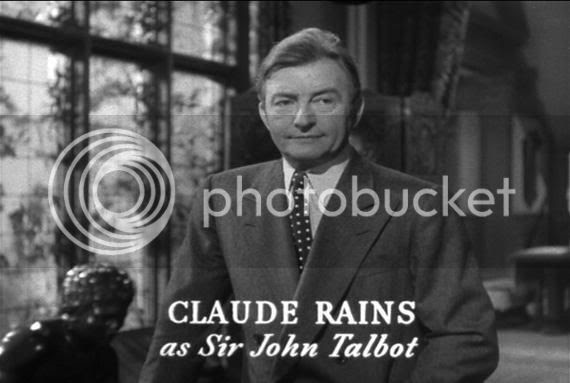 The cast is pitch-perfect, right down to the tiniest supporting roles. Get a load of this amazing cast: Lon Chaney Jr. as Larry Talbot, Claude Rains as his father, Evelyn Ankers as  Gwen Conliffe, Talbot's love interest, Patric Knowles as her fiancee, Ralph Bellamy as Colonel Montford, Warren William as Dr. Lloyd, Maria Ouspenskaya as the gypsy woman Maleva, and Bela Lugosi as Maleva's son. That is easily one of the greatest casts ever assembled for a horror film, and all of them are very good in their roles. Chaney Jr. is often underrated as an actor, and while he isn't on the same level of a Karloff or Lugosi, he was better than he is generally given credit for. He is splendid as Larry Talbot, a role he seems to have been born to play. Of the marvelous supporting cast, Ouspenskaya, in particular, is a standout, and Bela makes a strong impression in the brief time he is onscreen. 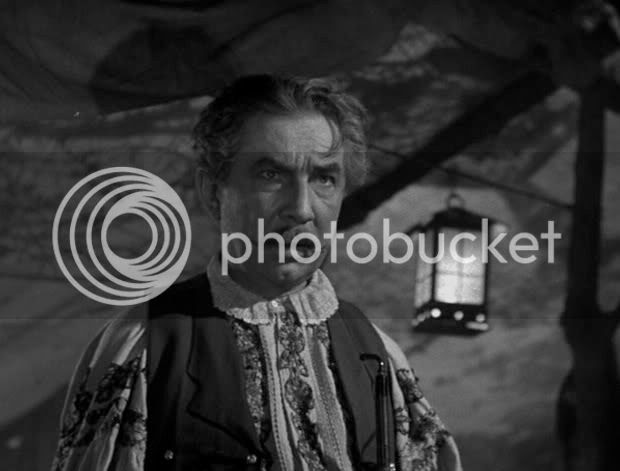 The film is also excellent from a technical standpoint. The score is one of my favorites from the era, and ranks among the great horror film scores of all time. This is one of those films that really drives home how lousy the music in the majority of more modern horror films really is. The atmospheric cinematography and set designs set the mood perfectly. 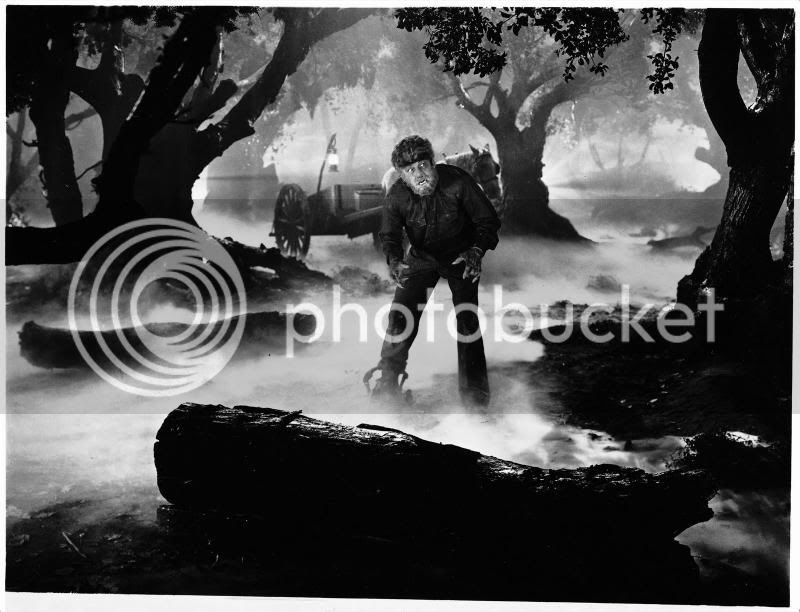 And then, we have the visual effects. Jack Pierce's wonderful makeup design is one of the all-time great iconic creations, and the transformation scenes are very well done. They would perfect the transformation technique in future films featuring the Wolf Man. Chaney spent long hours in the makeup chair as Pierce worked his magic, but it all paid off in the end, as Chaney took his place as one of the great horror icons. 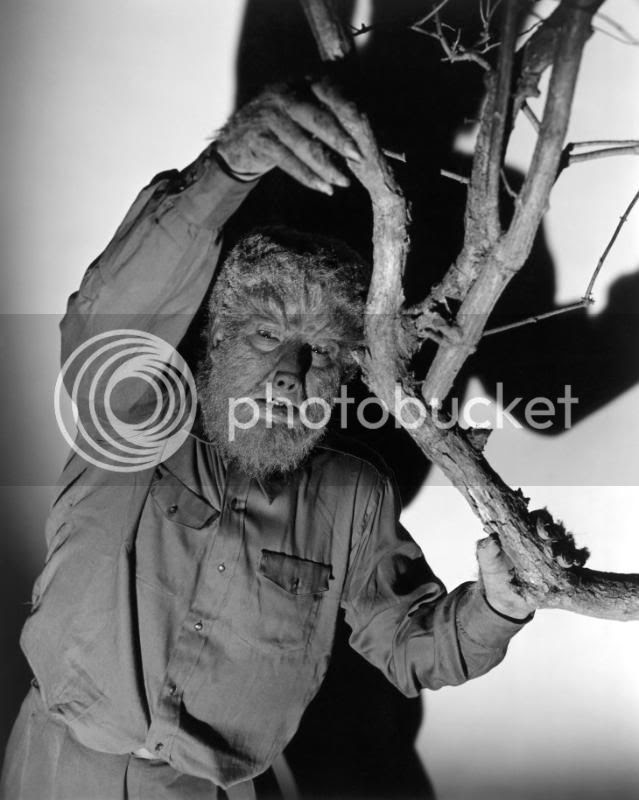 The Wolf Man was the most popular of the monsters during the World War II years, and he remains the only classic Universal monster who was portrayed by the same actor in every appearance. Chaney eventually portrayed all of the classic monsters, but he always referred to the Wolf Man as his "baby." It was one of his favorite roles, and easily the one for which he is best remembered today. That's a fine legacy indeed. 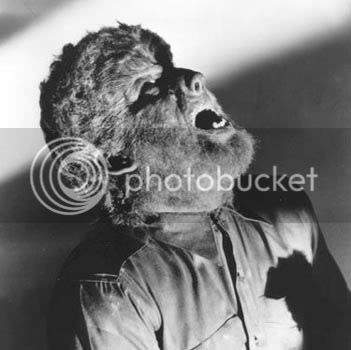 The Wolf Man is not my favorite of the classic Universal monsters, but this film is one of my very favorite horror movies. Siodmak's marvelous screenplay, a cast that is almost too good to be true, and the film's all-around technical excellence makes The Wolf Man one of the crown jewels in the classic Universal horror cycle. There have been several DVD releases of this film that can be had cheaply, and it deserves to be on the short list of classic horror movies you should see if you're not already familiar with it. It is one of Universal's best.
Keep scrolling down, there are a TON of photos! 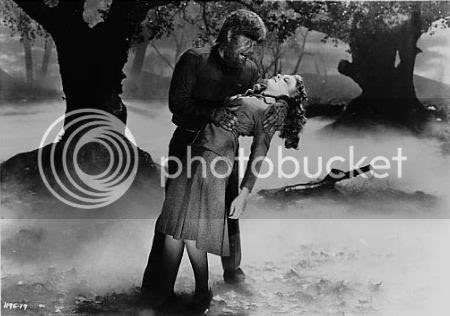 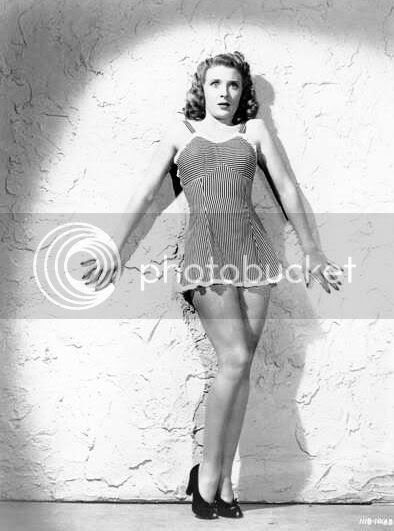 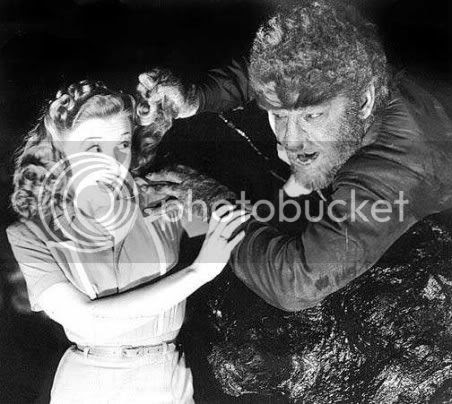 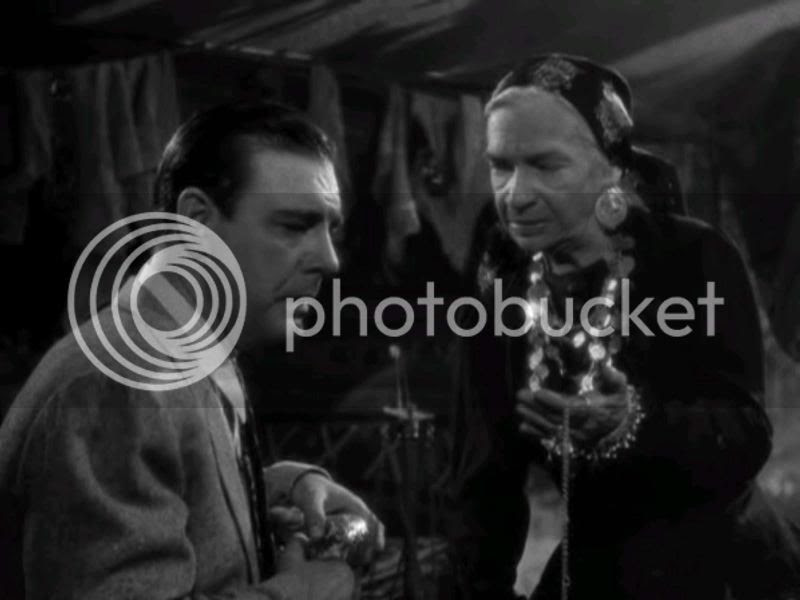 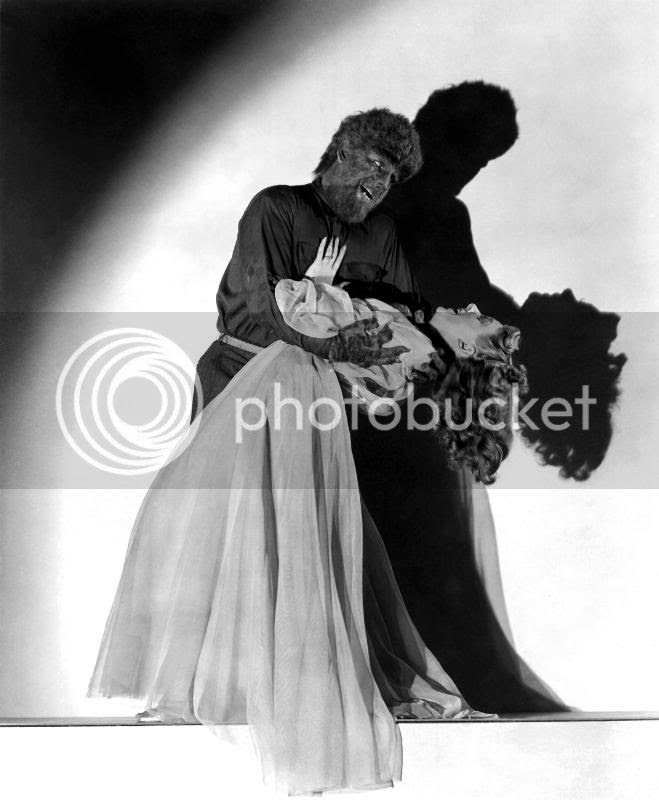 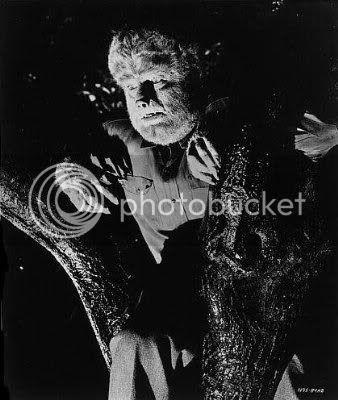 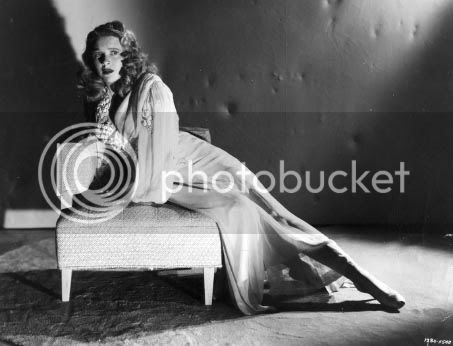 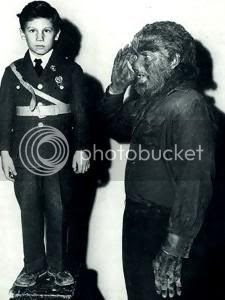 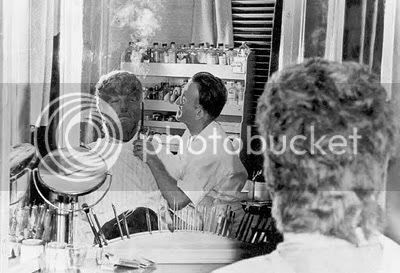 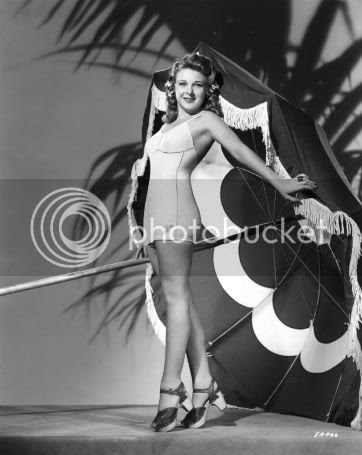 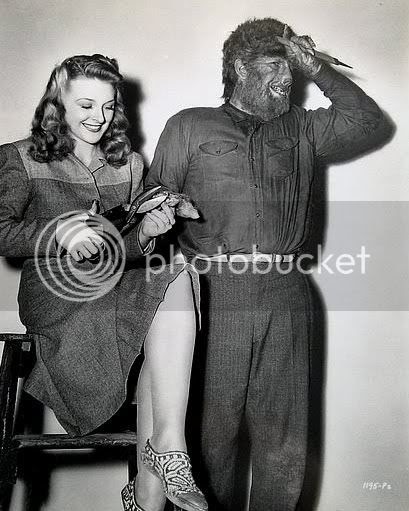 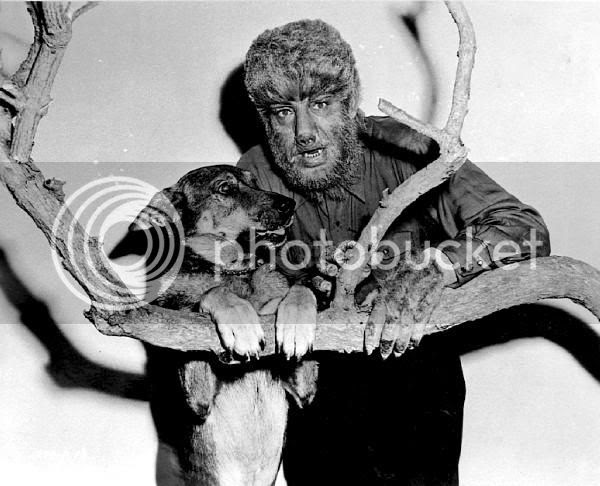 Chaney with his dog, Moose.

Posted by Waylon Piercy at 6:22 PM