31 Days of Halloween Two-fer: House of Frankenstein and House of Dracula 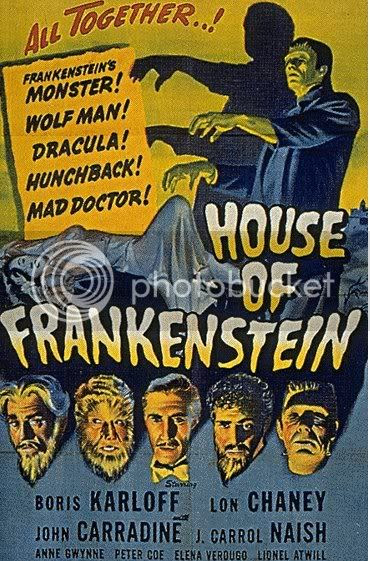 It's two for one today, as I've decided to group both of these mid-'40s Universal Monster Rallies together! As Universal monster movies go, House of Frankenstein and House of Dracula are not among the more popular entries in the cycle. Is the stigma attached to these two movies justified? Keep reading! 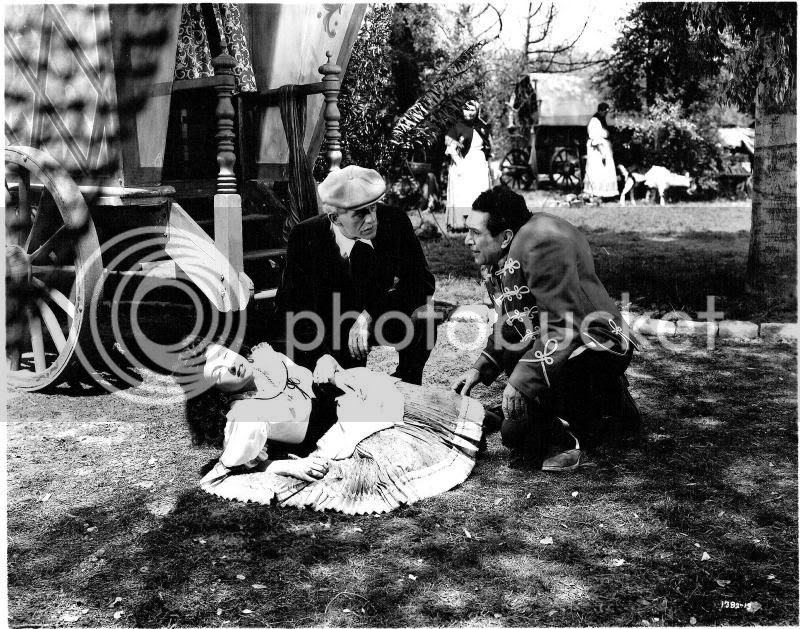 House of Frankenstein, alternately titled Chamber of Horrors and The Devil's Brood at various stages of production, was the natural evolution of the idea of pairing up the Frankenstein Monster and the Wolf Man in Frankenstein Meets the Wolf Man. It is rumored that an early draft of the screenplay featured even more monsters from Universal's stable, such as the Invisible Man, the Mummy, and even the Mad Ghoul! The final film still boasts quite a roster; aside from the returning Frankenstein Monster and Wolf Man, we also have Dracula, a hunchback, and a mad scientist! 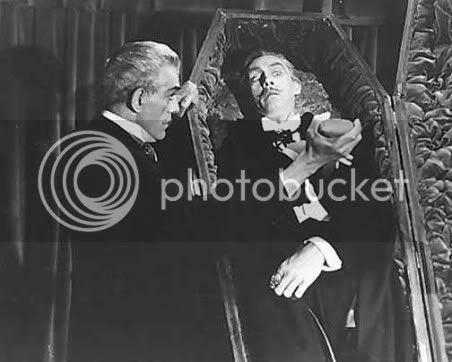 Dr. Niemann(Boris Karloff) and his assistant, the hunchbacked Daniel(J. Carrol Naish), escape from prison and quickly hijack the traveling carnival of Professor Lampini(George Zucco). Among Lampini's attractions is the skeleton of Count Dracula(John Carradine). Removing the stake which had rendered the vampire helpless, Niemann convinces Dracula to aid him in seeking revenge on the men responisble for his imprisonment. Daniel befriends an abused gypsy dancer, Ilonka(Elena Verdugo), and she joins the motley crew. While searching for the records of Dr. Frankenstein, Niemann and Daniel discover the Wolf Man(Lon Chaney Jr.) and the Frankenstein Monster(Glenn Strange) frozen in ice! Niemann bamboozles Talbot into helping him revive the monster, promising that he can cure Talbot's lycanthropy. The whole situation comes to a head once the group arrives in Niemann's old laboratory, arousing the ire of the surly villagers. 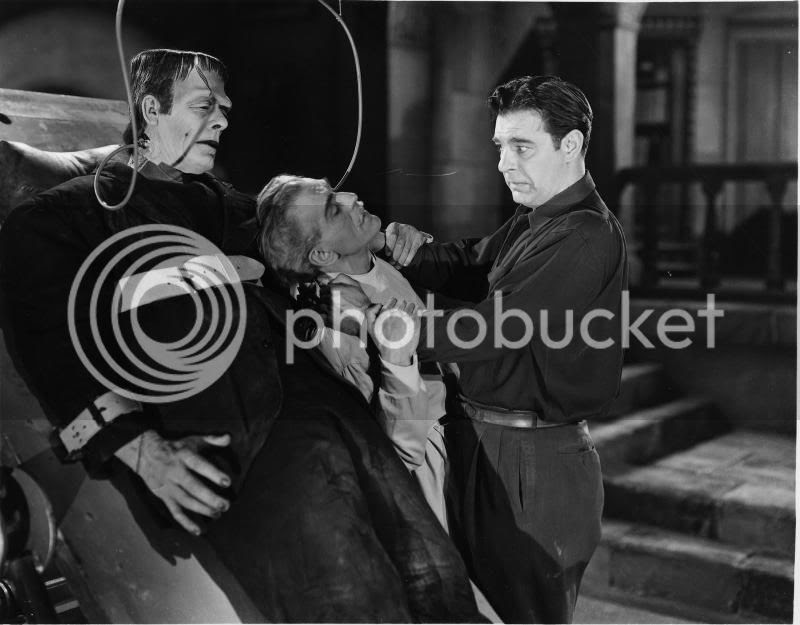 The performances in HoF are rather good overall, with Karloff's Dr. Niemann a standout. He transitions from cordiality to icy menace flawlessly, whenever appropriate. Chaney could play Talbot in his sleep by this time, and the script gives him no opportunity to break any new ground with the character. Still, he does a good job in a role with which he was very familiar at this point. 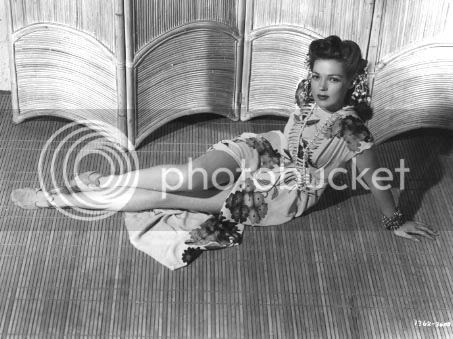 Carradine's Dracula has long been the source of much debate. (My nephew always disliked him, referring to him as "that imposter Dracula!") While it's always tough not to miss Bela Lugosi when Dracula is called for, on the whole, I feel that Lugosi's Dracula simply would not have worked as well in this film as the character is written. For example, it's impossible for anyone I know to imagine Lugosi's Dracula coming up short in a battle of wills, as Carradine's Dracula does in this film! Carradine lacks the refined, magnetic charisma of Lugosi, but he still is adequate as Dracula in this film. The script doesn't give him a whole lot of room to develop the character, but he does have one standout scene in which he seduces Rita(Anne Gwynne), the daughter of one of Niemann's enemies. 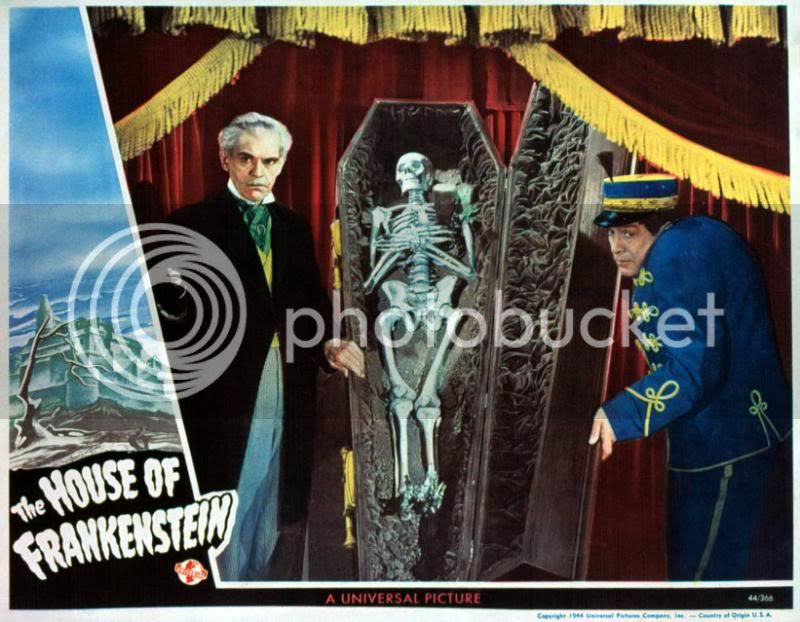 The music and sets are mostly re-used from earlier films, but they all suit the film extremely well, and are not a detriment to the film. The bat transformations used for Dracula are quite nice, although the fake bat used is still laughable. (Also, keep an eye out for a scene in which Talbot transforms into the Wolf Man in front of a dresser. His hands remain bare, although they're furry again a few seconds later.) 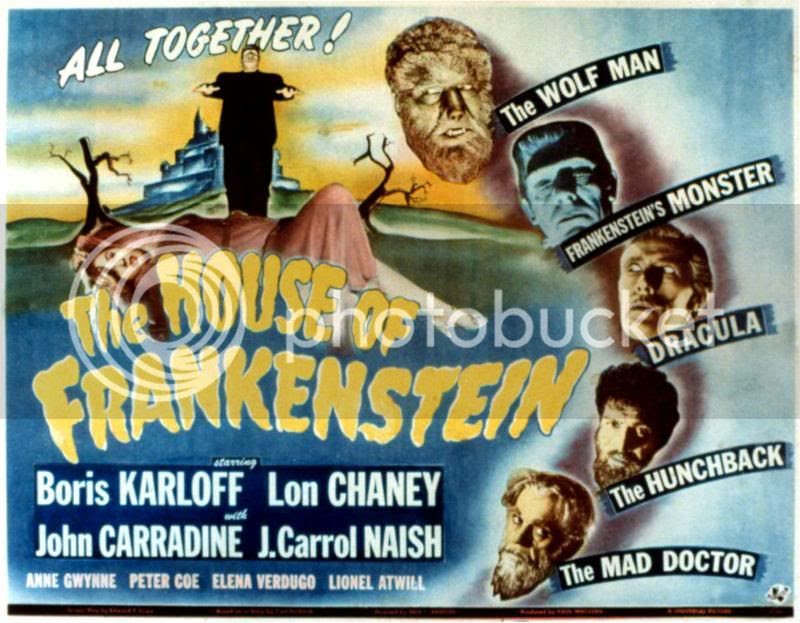 All in all, I find House of Frankenstein to be an enjoyable film. Its episodic nature gives it a feel that is unique among the classic Universal horrors, and the script and cast are all entertaining. It's not on the same lofty level as all-time classics such as The Wolf Man and The Bride of Frankenstein, but it's a decent movie that is a good deal of fun when judged on its own merits.

House of Dracula, on the other hand, I find rather disappointing. The film opens as Dracula(Carradine again) transforms into human form(a much better fake bat is used in this film) and pays a visit to renowned Dr. Edelmann(Onslow Stevens). Dracula wants Edelmann to cure him of his vampirism, and Edelmann agrees, allowing the vampire to keep his coffin in his cellar. He deduces that the source of Dracula's vampirism is a strange blood disease, and sets about giving Dracula blood transfusions and an antibody he has concocted to counter it. 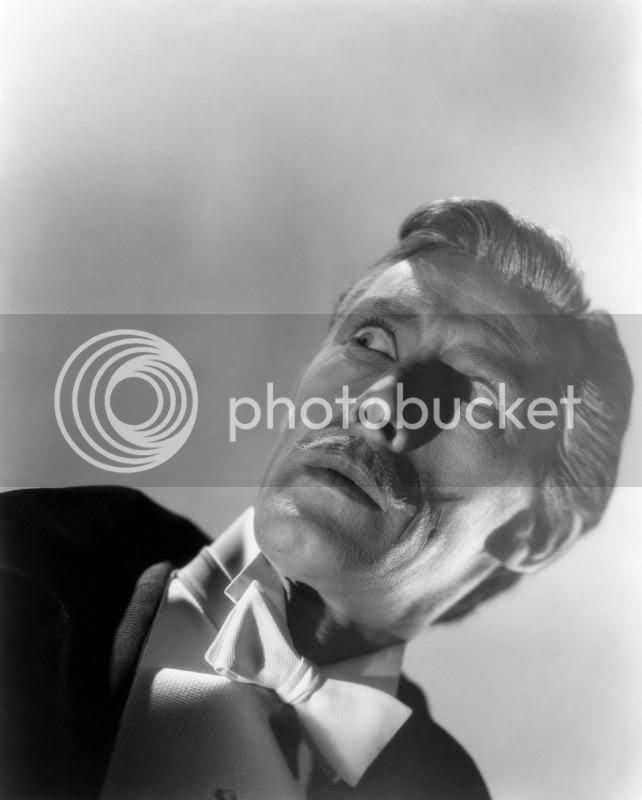 Meanwhile, Larry Talbot has arrived seeking Edelmann's help. Edelmann is busy with Dracula, so Talbot heads into town where he quickly flies into one of his patented "Aw, ya don't understand" rages and gets tossed in jail. Because of the Talbot's odd behavior, the constable(Lionel Atwill) calls Edelmann. After they witness Talbot's transformation within the confines of his prison cell, Edelmann takes Talbot back to his house for treatment. 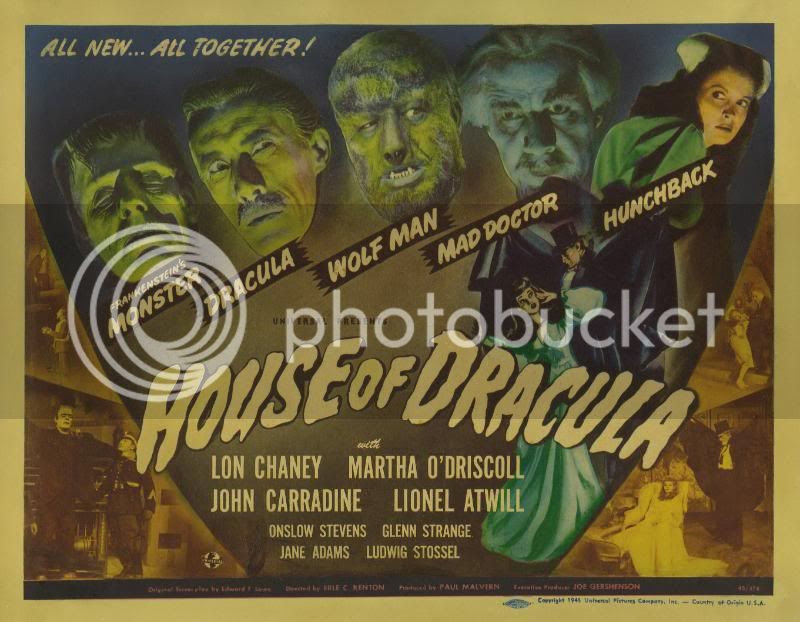 Edelmann determines (brace yourself) that Talbot is not a werewolf at all, but suffers from self-hypnosis! Basically, he thinks he is supposed to turn into a werewolf, so his body makes it happen. (Maybe Talbot and Dracula should have checked this guy's credentials out before they went to him for help!)  Edelmann and Talbot soon discover the Frankenstein Monster in a quicksand deposit in a cave underneath the house, and Edelmann brings him into his lab. 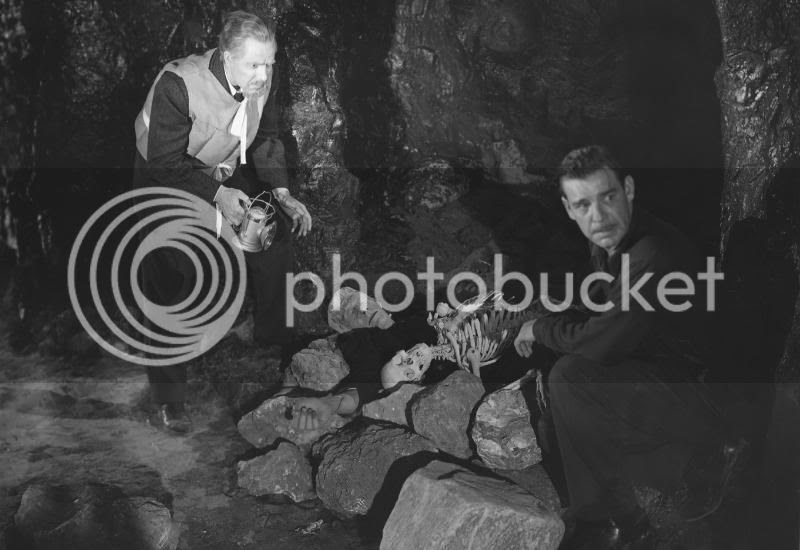 Meanwhile, Dracula has reverted to his wicked ways, unable to deny his vampiric nature. He seduces Edelmann's asistant Miilza(Martha O'Driscoll) in a scene that is extremely similar to the seduction scene in House of Frankenstein, with nearly the exact same dialogue in places. When Edelmann wants to do another transfusion, Dracula hypnotizes Edelman and his other assistant Nina(Poni Adams, this film's hunchback) and infuses Edelman with some his tainted vampire blood! This brings about periodic Mr. Hyde-like transformations for Edelmann, who then sets about restoring the Monster's power. 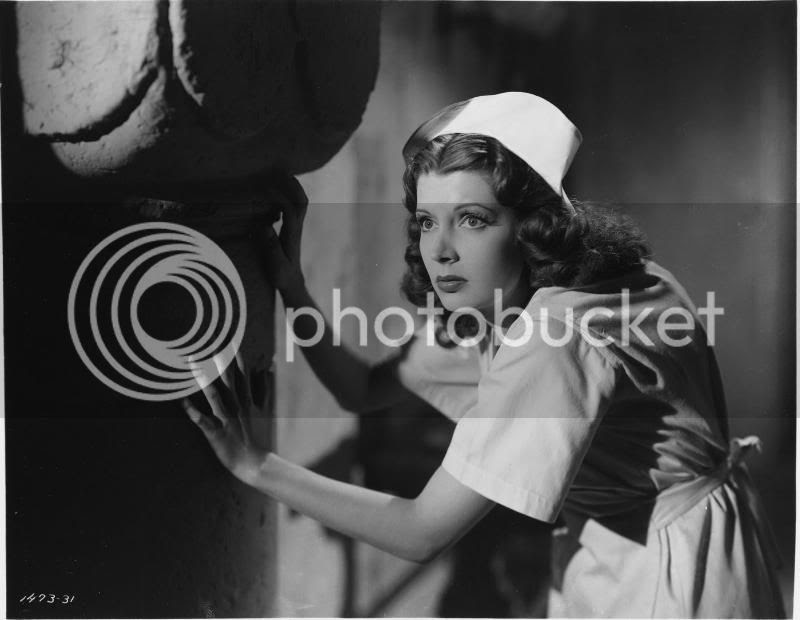 The film is rather well-acted overall, particularly Onslow Stevens as Edelmann and Carradine as Dracula. Dracula is in this film far longer than its predecessor, and thus has more time to develop as a character. Dracula's (apparently) sincere desire to be free from his affliction and his tragic inability to resist his darker nature for long makes for some interesting viewing. 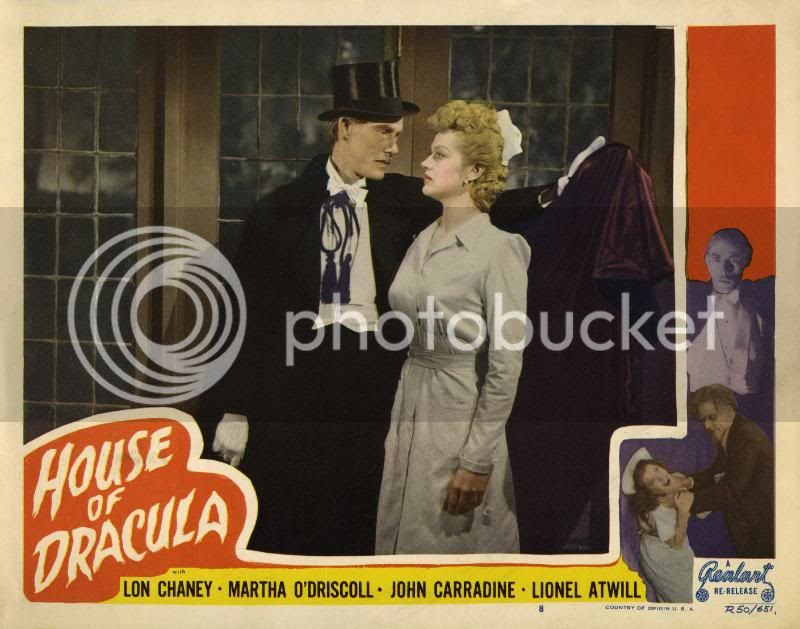 The film missteps in several key areas, however. No attempt whatsoever is made to explain how Dracula and Talbot recovered from their supposed deaths in the previous film. The audience is obviously in the mood to accept their return, but the film's lack of any explanation is just plain lazy. Edelmann's "scientific" explanations for vampirism and Talbot's transformation into a werewolf are ludicrous. It's easier to simply believe that werewolves exist than to buy into Edelmann's theory! 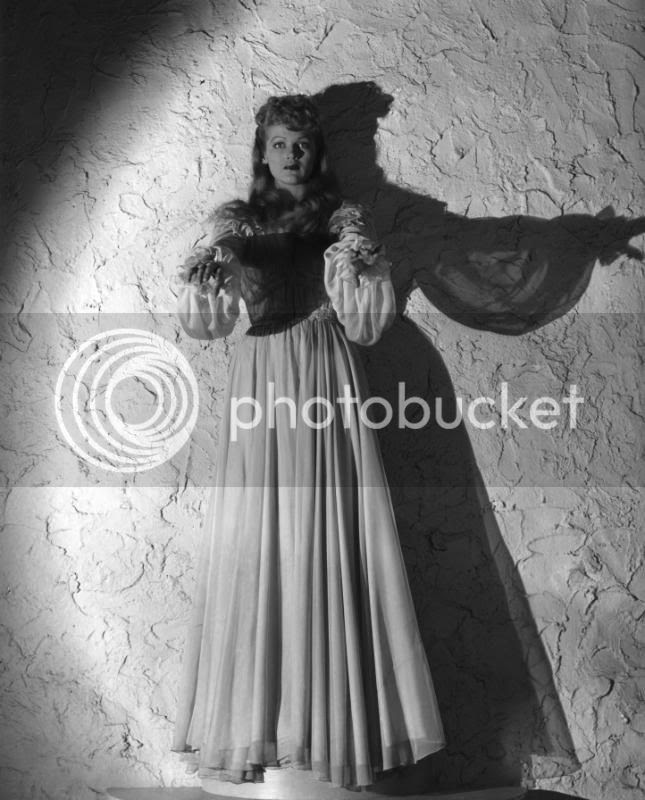 Glenn Strange makes his second of three film appearances as the Frankenstein Monster. The stiff walk originated by Bela Lugosi as the nearly-blind Monster in Frankenstein Meets the Wolf Man reaches its apotheosis in Strange's performances; he plays the Monster as very stiff, and rather dimwitted. He can hardly be blamed for that, however, as that's exactly how the character is scripted in these films. The Monster had become, as Karloff predicted years earlier, little more than a prop. 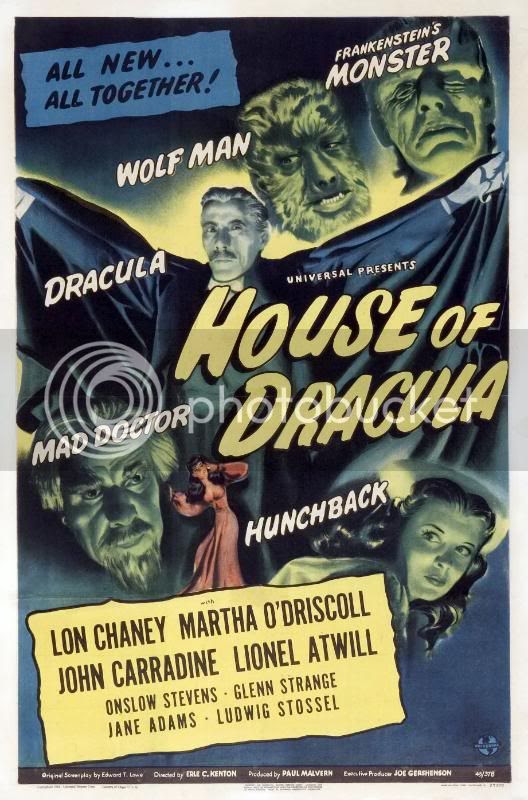 House of Dracula is really one of the low points in the Universal horror cycle. There is entertainment to be had from it, but it's not as plentiful as it should be, and it falls far short of the standards set by its predecessors. Ultimately, while I can recommend House of Frankenstein, House of Dracula is for completists only. 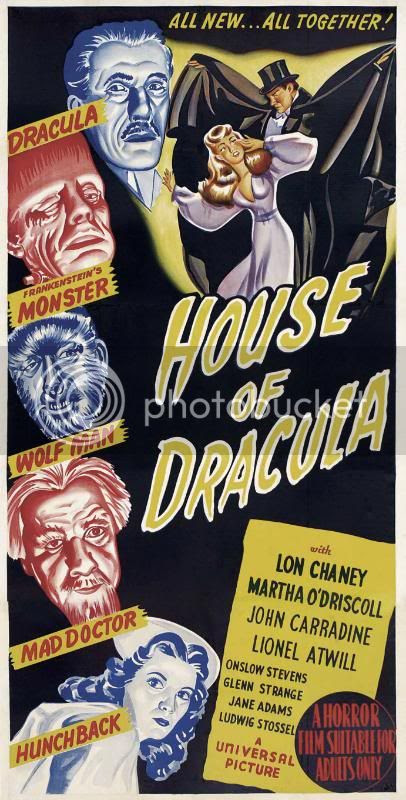 Posted by Waylon Piercy at 9:01 AM