31 Days of Halloween: Son of Frankenstein 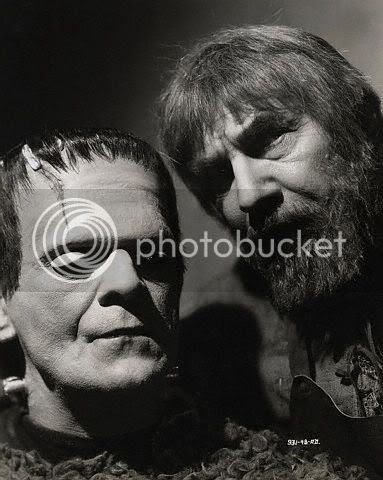 It's Frankenstein Friday, and we're tackling the next installment in the Universal series: 1939's Son of Frankenstein! 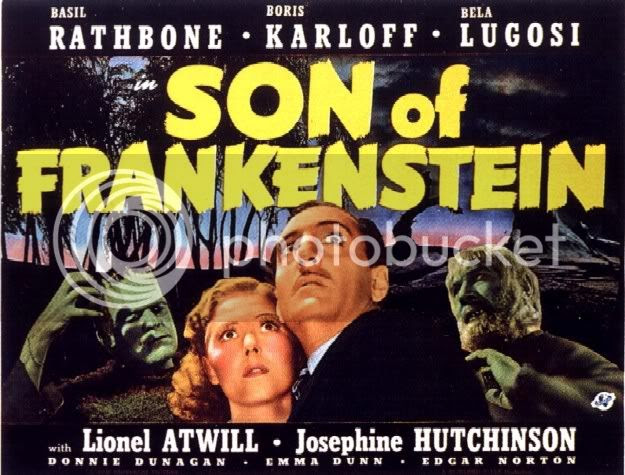 After the first cycle of horror films ended with Dracula's Daughter in 1936, stars identified with the horror film had something of a rough time in Hollywood. Some, such as Boris Karloff, fared well, but no one really had as tough a time as Bela Lugosi. (The horror icon's financial situation was so bad by 1938 that he had to swallow his pride and appeal to the Hollywood Actors' Fund to pay for the birth of his son.) 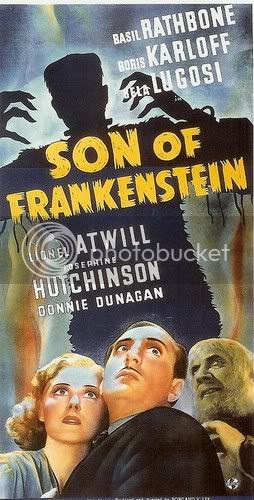 The new owners of Universal saw the kind of money theaters were raking in with re-releases of their classics Dracula and Frankenstein. With visions of dollar signs dancing in their heads, the top brass at Universal decided a new film in the same vein would make even more money. 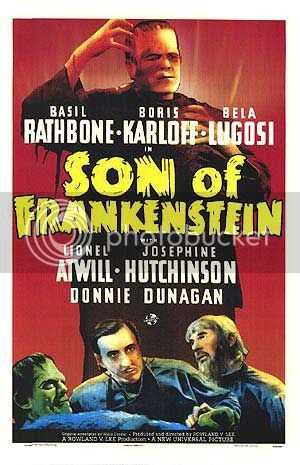 Rowland V. Lee was hired to direct Son of Frankenstein. Universal, always full of heart, took advantage of Lugosi's well-known financial difficulties by hiring him at the insulting payrate of $500 per week. When Lee found out about this, he was livid. He expanded Lugosi's part, and put him in the background in scenes where he really had nothing to do, so that he could keep Bela on the payroll for the entire length of the production. 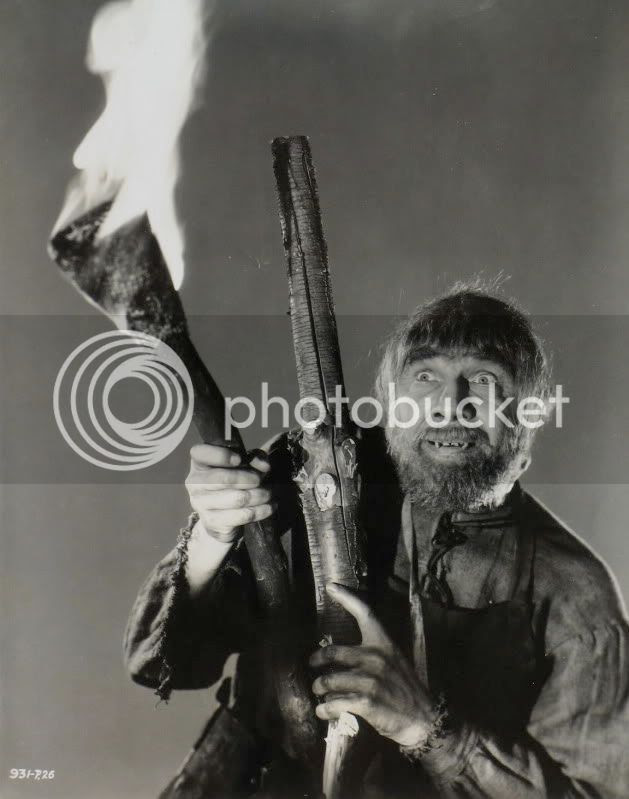 The film opens as Wolf Frankenstein(Basil Rathbone), his wife Elsa(Josephine Hutchinson), and their son Peter(Donnie Dunagan) are on a train, bound for the village of Frankenstein. Wolf has inherited his infamous father's estate, and is moving the family in. They receive a cold reception from the townsfolk("We're here to greet you. Not to welcome you!"). 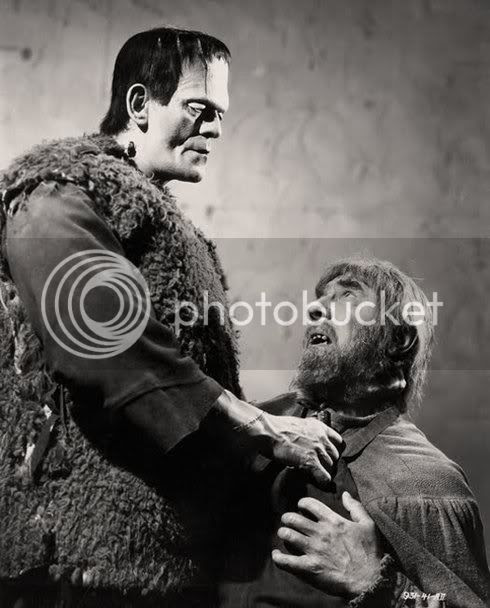 Moving into the large, foreboding castle, the Frankensteins are paid a visit by Inspector Krogh(Lionel Atwill). Krogh assures Wolf that he will be on hand to assist him in the event the surly, superstitious villagers threaten him or his family. When Wolf questions the vailidity of all the horrible tales about the Monster his father created, Krogh relates the tale of how he lost his arm as a small boy("One does not forget, herr Baron, an arm torn out by the roots!"). 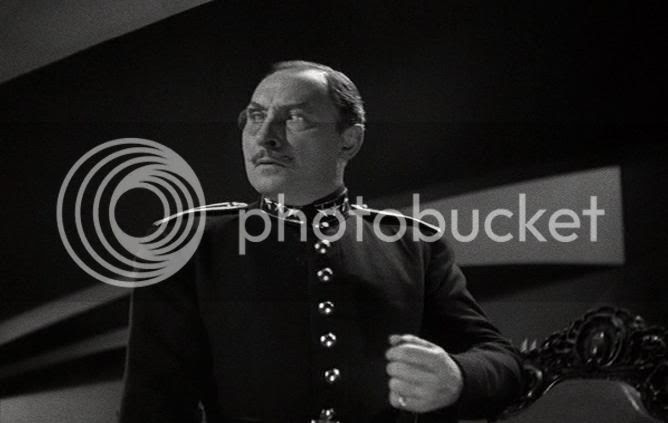 Exploring the estate the next day, Wolf goes up to the ruined laboratory. There he encounters broken-necked Ygor(Lugosi), who eventually takes Wolf into a secret passageway where he sees the Monster! The Monster is unconscious, having suffered severe damage during a violent thunderstorm. Ygor wants Wolf to make his friend well("He is my friend. He... does things for me!"). Wolf agrees, wishing to restore the monster and replace his brain, vindicating his father and the family name. 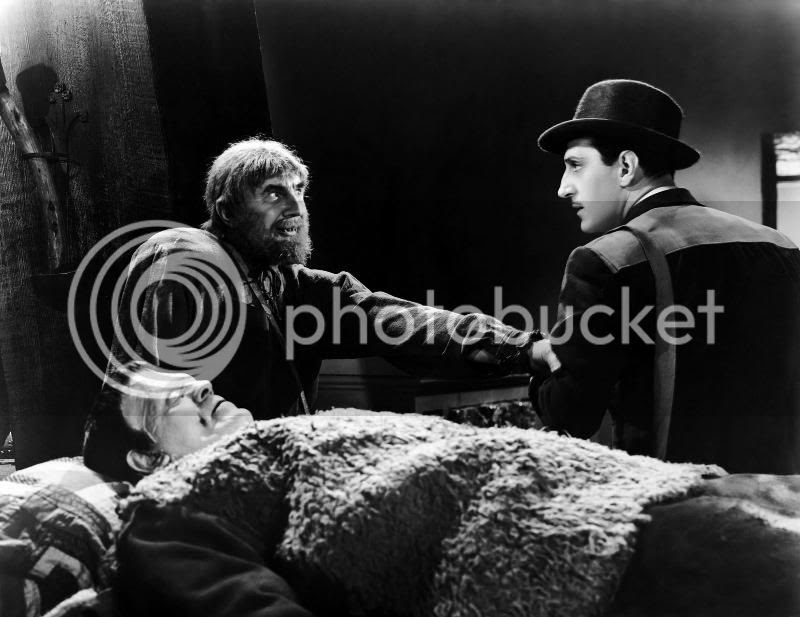 Once the Monster is revived, however, it immediately becomes clear that he does the bidding of his friend Ygor. As Ygor resumes sending the monster out to murder his enemies, the already unruly villagers grow more and more suspicious of the Frankensteins, and that tension eventually reaches a fever pitch. This, along with disputes between Wolf and Ygor, leads to the film's climax. 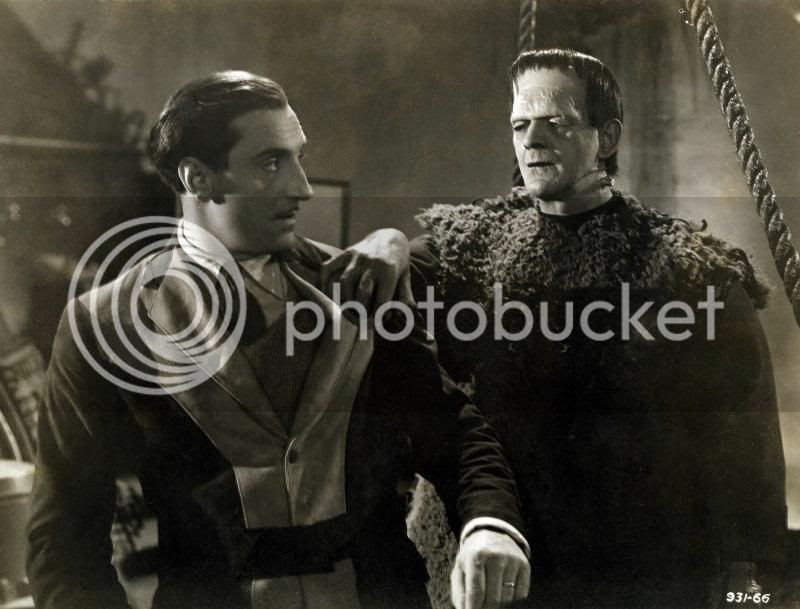 Rathbone is quite good as Wolf, scenery-chewing and all. Some have criticized his performance as being too "over-the-top," but I find his bombastic performance right at home in the film. (This character also served almost as a template for Gene Wilder's Frankenstein in Young Frankenstein). 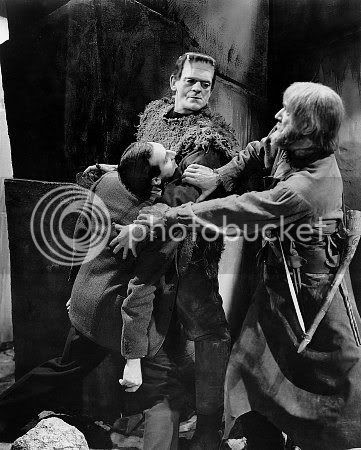 Rathbone may have top billing, but few would argue that Lugosi is the star of the film. His wonderful performance as the sinister Ygor is one of his finest, and his relationship with the monster is both complex and oddly touching. Ygor is a scheming, dangerous fiend, yet Lugosi also gives him a charming roguish quality that almost makes us root for him. 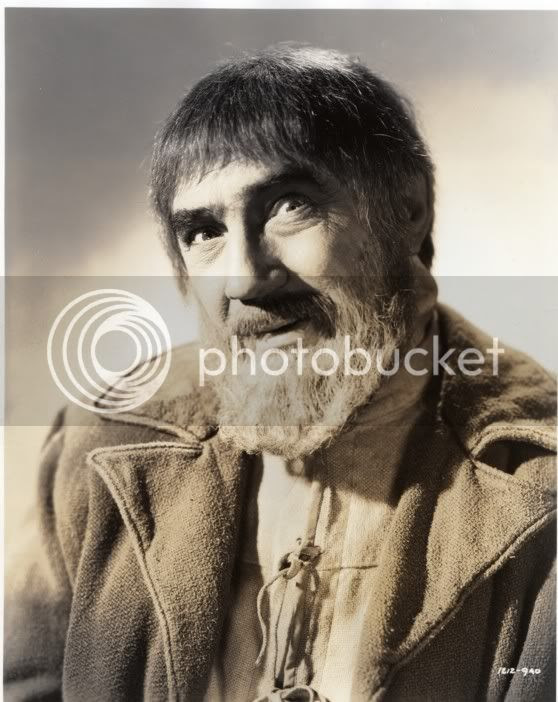 Karloff's Monster in this film doesn't get as much screen time as in the two previous films, but he is given some good scenes, and Karloff makes the most of them. Karloff got his wish in this film, as the Monster no longer speaks-- in story terms, this can be chalked up to the damage he has suffered-- and that also means he could remove his dental plate again, so the deeply sunken cheek is back. Both of Karloff's other performances as the Monster are better, but he does not disappoint here, either. This was Karloff's last appearance on film as the Frankenstein Monster; at this point, he felt the character had really gone as far as he should go, and that the Monster was becoming little more than a prop(Karloff was proved right in subsequent films). 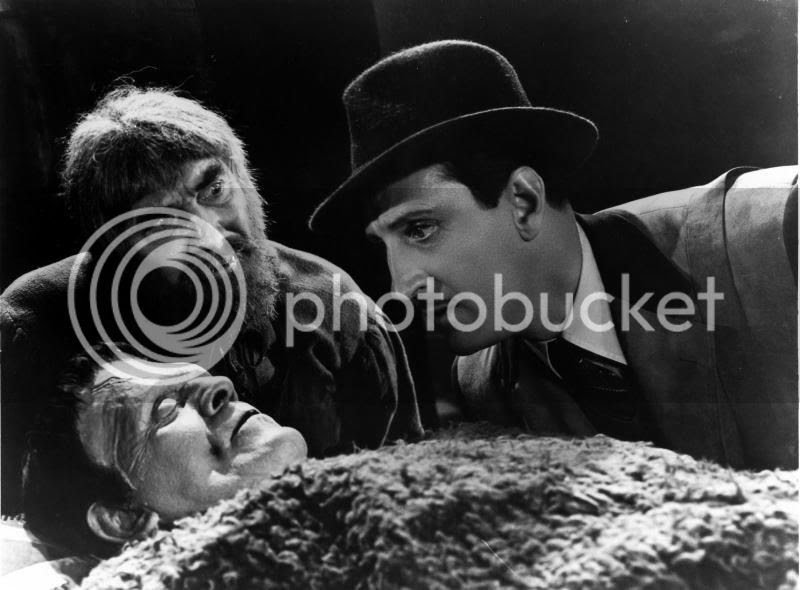 Lionel Atwill gives an excellent performance as Krogh, bringing a quiet dignity to the character that makes him memorable in a film already packed with memorable characters. There has been much debate over Dunagan's performance as Peter, with many feeling that he is a detriment to the film. He's almost unbearably cute, and doesn't display much acting ability(he was only 5 years old); on the other hand, as a small child playing a small child, he is undeniably genuine in the role, and I feel he adds to the film, rather than detracts from it. Your mileage may vary, but even if you dislike him, he doesn't have enough screen time to really hurt the film.
Also, keep an eye out for Dwight Frye in a small role as a villager. 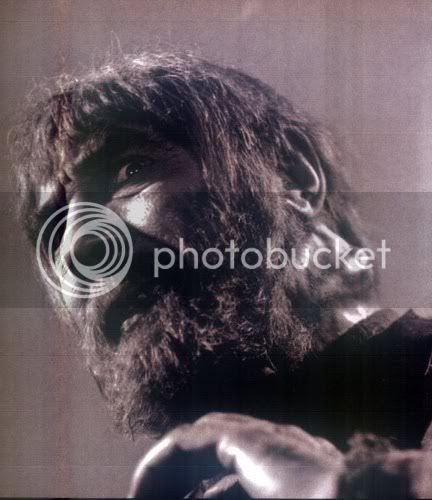 The sets in the movie are marvelous. Evoking a dark, Gothic atmosphere, they border on expressionism at times, and add to the mood immeasurably. The music is also excellent, standing as one of the finest scores in any horror film. 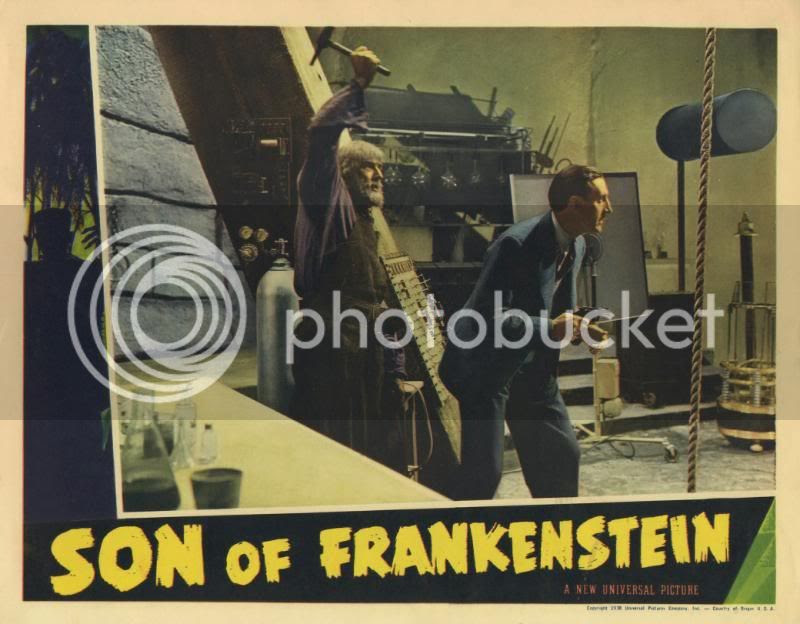 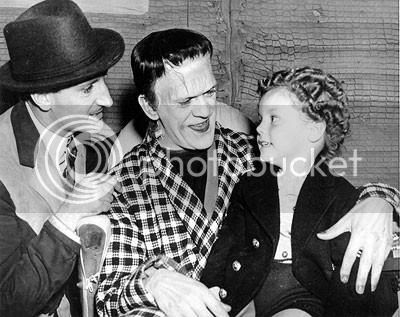 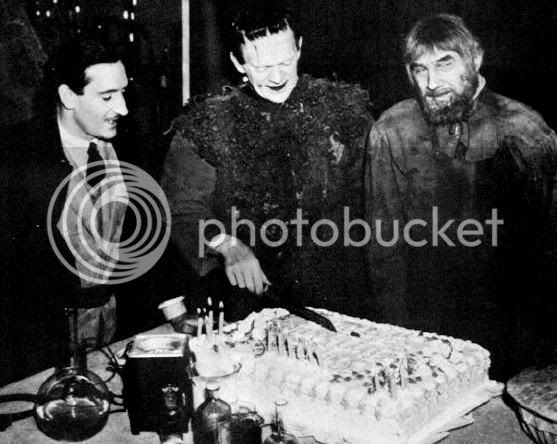 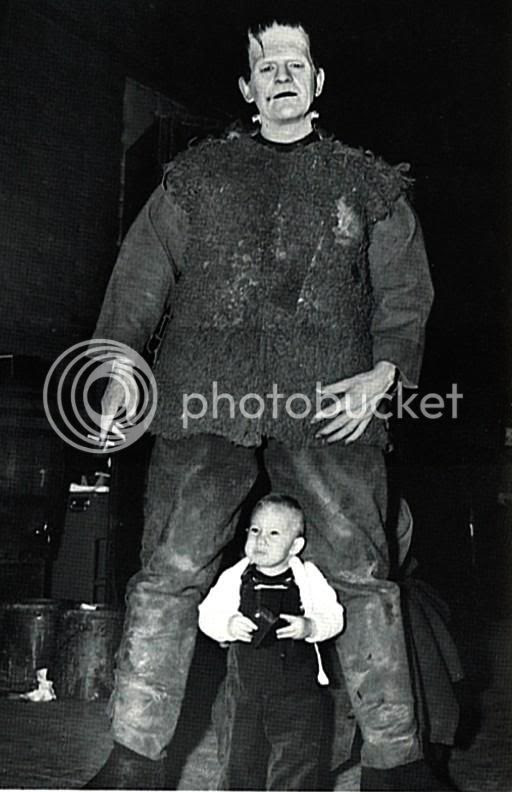