It's the final week of New 52 debuts, and we've got a lot to cover, so let's dive right in! 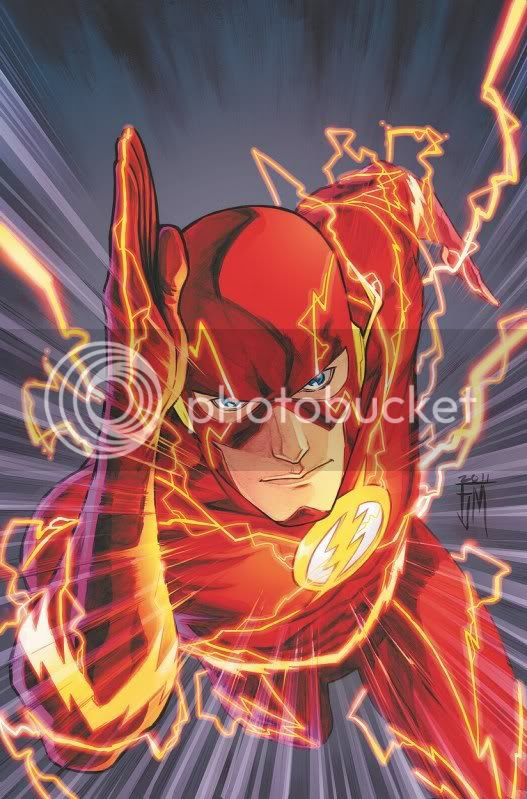 The Flash #1
The Flash has been one of the most tinkered-with and relaunched series of the past decade. A brief recap: After two decades, the Wally West-starring Flash series was cancelled soon after writer Geoff Johns ended his excellent run. Then, after the Infinite Crisis event, it was relaunched with former Impulse/Kid Flash Bar tAllen as the lead. Then the series picked up its former numbering with Wally, now with two children with powers of their own. Then, Barry was revived as part of DC's unofficial Silver Age 2.0 initiative, and Wally was brusquely shoved aside so Barry could have the spotlight again. This latest series ended a few months ago, as the Flashpoint event kicked off. And now, we've got the new series launching, again with Barry as the lead.
I'll be honest here: I've never cared for Barry Allen much. Wally West always struck me as a far more interesting character, whule Barry worked best as the deceased former mentor and basically the patron saint of the DCU. (His death in Crisis On Infinite Earths was one of the best send-offs any character has ever gotten.) Barry had popped up here and there on rare occasions due to the Flash-friendly method of time travel, but bringing the character back full-time seemed like regression to me. Shoving a fan-favorite character aside to make way for him only made it worse. Despite that, I still enjoyed the last Flash series, for the most part. Like it or not, Barry is back, so it's only sensible to make the best of it.
Unfortunately, this debut issue doesn't have a lot to enjoy. Writer & artist Francis Manapul is unproven as a writer, and this issue doesn't do much to make me think the book is in good hands. Manapul's art is pretty good, as usual, and I particularly like how he uses the piping and lines that have been added to the Flash costume. It turns what could have been pointless additions into a visual treat that fits right into the theme and look of the character.
Manapul and co-writer Brian Buccellato weave a tale that is rather dull and uninteresting. It is new reader-friendly though, as it gives us a brief explanation of how Barry's powers work, and a look at his new status quo.  It is unlikely that readers will have any trouble following what is happening, but they probably won't find it very entertaining. This is a disappointingly weak issue. It's not bad, just not very interesting. Hopefully the team will hit their stride very soon and things will improve. I'll be back next month, but that's due to my desire to read comics featuring the Flash, not because anything in this issue hooked me.
My score: 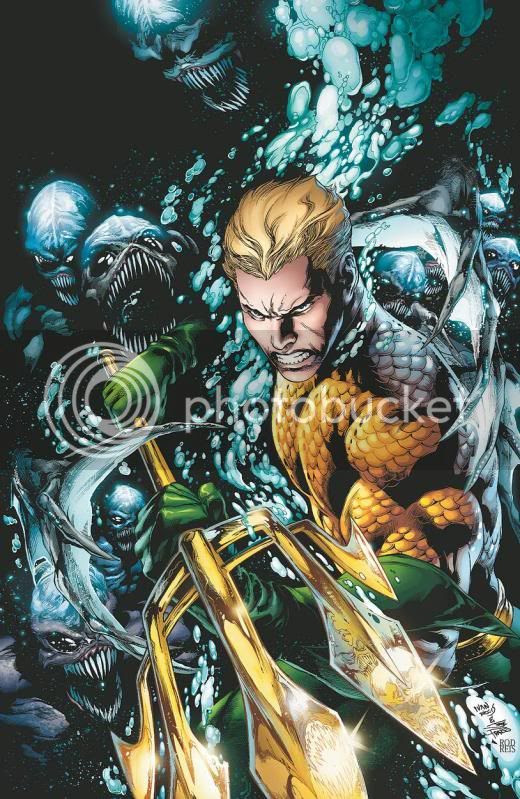 Aquaman #1
Aquaman gets no respect. No one seems to understand how powerful he actually is, or exactly what being Aquaman is all about; he is written off as "the fish guy," and laughed at. That's true in the real world, and now it's true in the DCU. Writer Geoff Johns has taken the clever tack of integrating this real-world disrespect hurled at the character into the character's comic, and it works quite well. The cops who Aquaman assists at the beginning of the issue are actually mortified that they got showed up by the fish guy. It's all very amusing, and promises to become even more so as it is explored further in the series. New readers likely attach the same stigma to Aquaman themselves, so having the average people of the DCU react this way works well to ease readers into Aquaman's world.
The issue also makes a good introduction to the character for other reasons. We get some glimpses into his past, a brief recap of his origin, and even an explanation of how he controls marine life, and does not actually "talk to fish." All this, plus a sinister new threat emerging from the darkest ocean depths! The book looks great in the hands of artists Ivan Reis and Joe Prado. This is an enjoyable debut issue, and holds a lot of promise for the character's latest lease on life. Aquaman has historically had trouble sustaining an ongoing series; hopefully this one sticks around for a while.
My score: 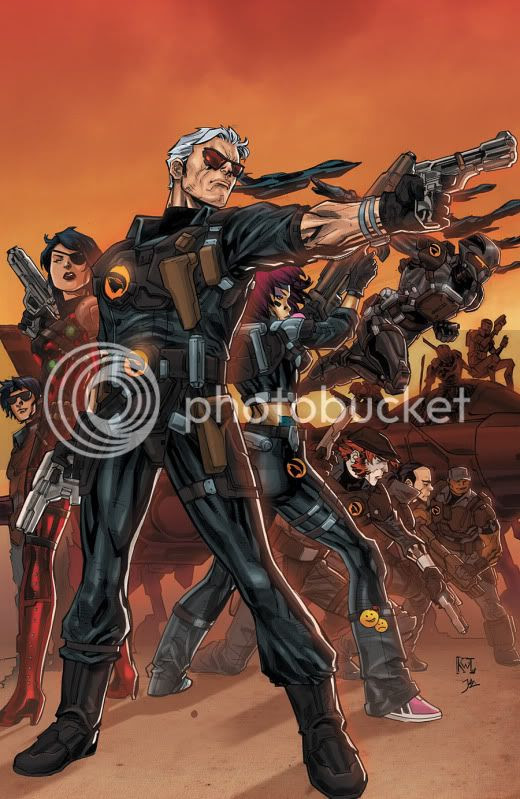 Blackhawks #1
I really want to like this one. I haven't read a whole bunch of the old Blackhawks comics, but I like what I've read. I've also enjoyed appaearances by some or all of the Blackhawks in more recent comics, and other media such as the Justice League Unlimited animated series. The idea of a new Blackhawks series appeals to me, and I was pre-disposed to liking it. Unfortunately, the comic we get from writer Moike Costa and the art team of Graham Nolan and Ken Lashley just isn't all that good. It's not bad, but just kind of mediocre. A bunch of stuff happens, most of it is not explained at all, and none of it is very interesting. The art is similarly middling, which is especially disappointing, since I've always enjoyed Graham Nolan's work in the past. I may check out the next issue to see if it gets any better, but my hopes are not high at this point.
My score: 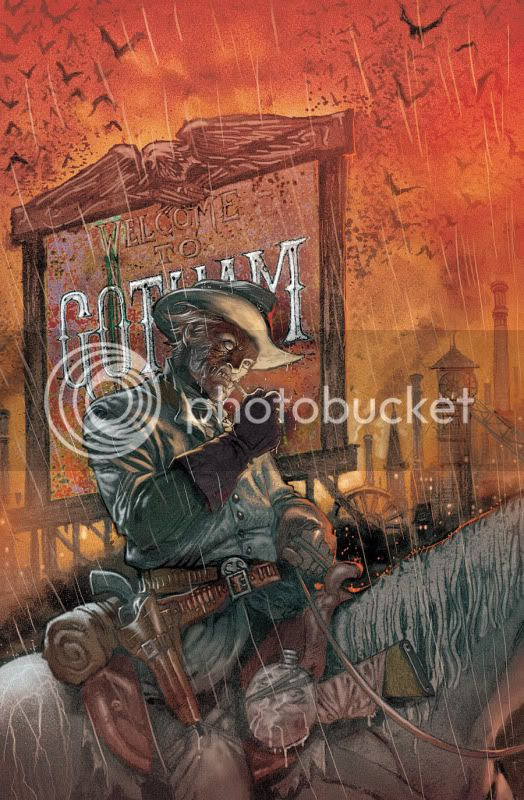 All-Star Western #1
I love the character Jonah Hex. Aside from the lousy movie, he's been pretty lucky in that all of his various appearances over the past few decades have given him a fairly consistent portrayal, and done a good job of it. This has never been more true than in the excellent ongoing Jonah Hex series that ended last month, from the same writing team that brings us this issue, Jimmy Palmiotti and Justin Gray. Joined by artist Moritat, they continue to bring us the adventures of Hex in this new series, with a slight twist: Hex is in Gotham City. Reluctantly working with Amadeus Arkham-- anyone who has read Grant Morrison and Dave McKean's excellent Arkham Asylum: A Serious House on Serious Earth graphic novel is aware of his eventual fate-- Hex is on the trail of the Gotham Butcher, who has been brutally murdering young prostitutes. Arkham cannot resist trying to analyze Hex even as he tries to keep up with him, and the unlikely pairing makes for some fun moments. Hex is definitely the fish out of water, and he makes the proverbial bull in the china shop look positively graceful in comparison. Moritat's art is excellent, rendering Gotham and its inhabitants with exquisite detail. The most recent Jonah Hex series had a long line of great artists, and thankfully, that tradition is continuing in this new series.
This issue ends on a cliffhanger, another change from the last Hex series, which almost always featured "done in one" stories. It definitely feels like we got our money's worth, unlike many other comics that seem to end just as the story gets rolling. This new series has tons of potential, and I can't wait to see what comes next.
My score: 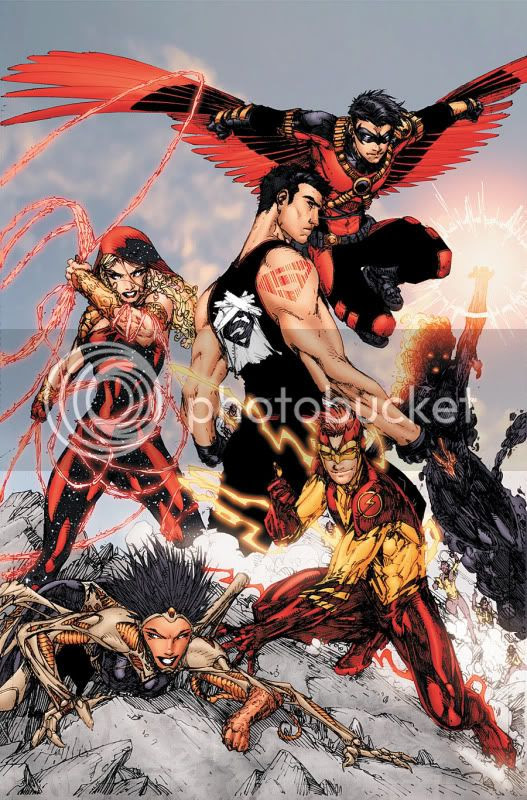 Teen Titans #1
After the atrocity that was Red Hood and the Outlaws, I was rather hesitant to dive into another Scott Lobdell-written book. Thankfully, this is much better. It never gets any better than just okay, but it's not too bad overall. The issue basically consists of Tim Drake, a.k.a. Red Robin, meeting Wonder Girl and dealing with the shadowy NOWHERE organization. I'll go on record here about the new Red Robin costume: I'm not crazy about it. The previous costume was so much better it's ridiculous; the new one isn't bad, but it's definitely a few steps back from the old design. This is a case of fixing what was not broken.
I do like the way Tim is portrayed in this issue, he's clearly the most intelligent person in the book, and five steps ahead of everyone else, as he should be. Aside from that, the story is a parade of events that seem only to set up the next explosion. As for Brett Booth's art, the less said about it, the better. Booth's art still looks like something you'd find in an image book in the mid-'90s-- and it often was, actually-- and I'll leave it at that.
Overall, this is a below average issue, but at least I don't think new readers will have any trouble understanding it. I will probably be back for the next issue, but unless it's a significant improvement, I wont be sticking around any further.
My score: 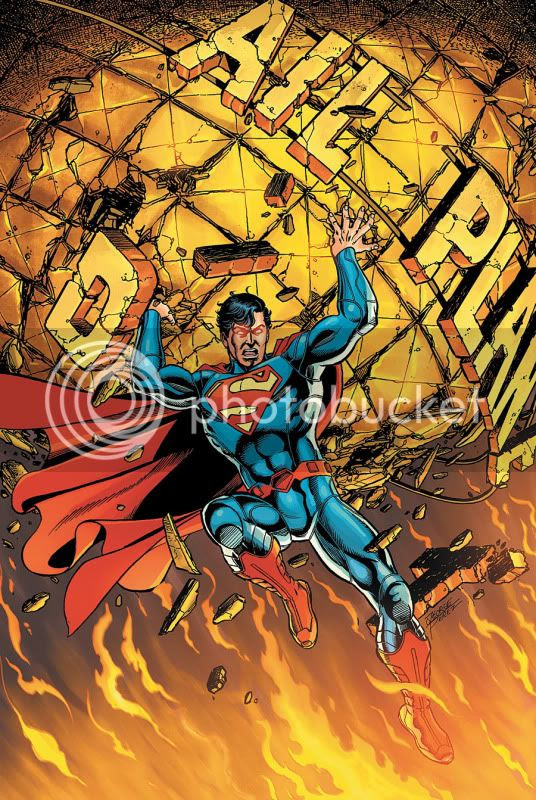 Superman #1
Writer George Perez and artist Jesus Merino kick off the modern-day adventures of Superman with this issue. The new Daily Planet building is opening, now part of the empire of media baron Morgan Edge. We're never told exactly how the old Daily Planet building was destroyed, although its ruins do come into play during the story. Likewise, people make reference to Superman being away for a while, but we're not told where he was. The bulk of the issue concerns Superman's battle with a fire monster, and the ensuing destruction. Superman seems very ponderous and a bit moody in this issue, and the entire comic is a rather lifeless affair. This is surprising, given the creative team. Perez has done good work in the past writing such series as Wonder Woman, but I had a hard tyime staying interested in this issue. At least it looks good, with Saiz delivering his usual excellent art. The new Superman costume looks perhaps the best it has to date in this issue. The comic ends on a higher note than it began, with the introduction of Lois Lane's new love interest-- already revealed in previews for the book-- and a very telling summation of her views on Clark Kent. This debut issue is a little clunky, but there's nothing really bad here. Hopefully things will pick up next month.
My score:

This is shaping up to be the weakest batch of New 52 debuts yet; hopefully the remaining seven can make the save! Come back by tomorrow for the rest!
Posted by Waylon Piercy at 8:59 PM