If you missed yesterday's reviews, you can catch up right here. 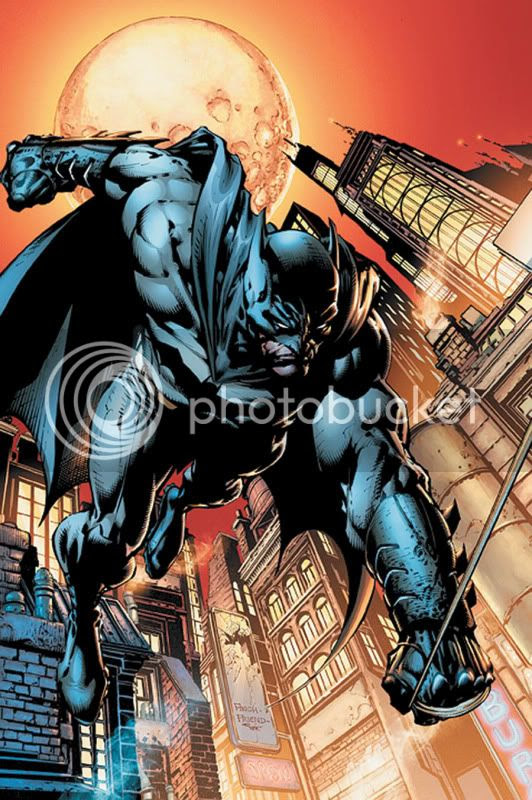 Batman: The Dark Knight #1
Seems a bit odd to be already getting a new #1 issue of this one, as it just debuted less than a year ago, but such is the nature of reboots! David Finch's writing on the previous iteration of this series was uneven, so I thought it would only improve with the addtion of Paul Jenkins, who wrote last week's wonderful DCU Presents, as writer and co-plotter. Oddly, this issue is no better than the preceding ones. That's not to say it's bad, just thoroughly average at best. We have Bruce Wayne at another in the endless parade of press conferences, and some Batman action when a mass breakout occurs at Arkham Asylum. There's nothing really bad going on with the story, it's just utterly unremarkable. (I do feel I should point out that the issue's final line manages to be both inane and utterly baffling at the same time.) Finch's art is very stiff at times, and he has the annoying habit of giving most of his characters the same face; there seems to be a default male face, and a default female face, with only slight variations within each group. His art  does have a few standout moments though, such as the double-page spread at the beginning of the issue, or the Neal Adams homage on the cover. This is not a bad comic, but it is a very middling one, and anyone who needs a Batman fix would be well-advised to pick mup any of the other Batman comics that have been released this month, assuming any can still be found.
My score: 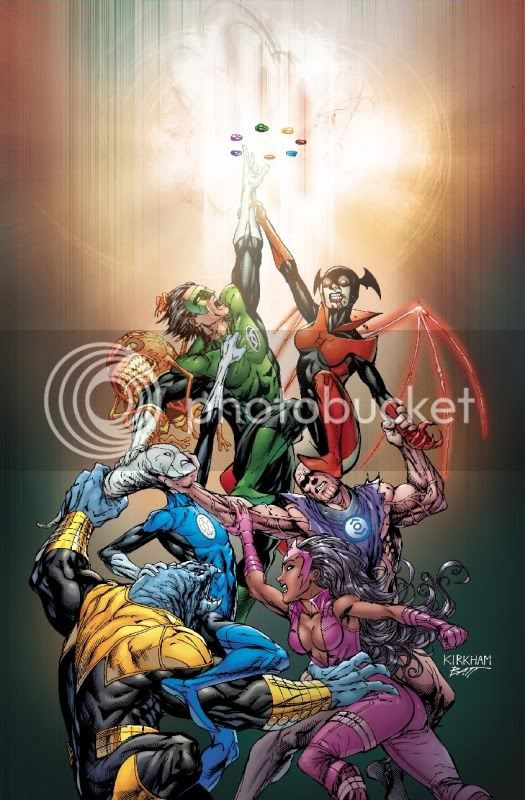 Green Lantern: New Guardians #1
The final GL book of the relaunch lands Kyle Rayner in his own series again, complete with an entourage made up of representatives from each of the different Lantern Corps. We get a slightly tweaked retelling of Kyle's origin, and then move to the present day, where members of various Lantern Corps are being abandoned by their rings. Writer Tony Bedard does a good job introducing us to Kyle, and the various space scenes are not confusing, even if we don't always know all the players. Tyler Kirkham's art is decent, with some rough spots here and there. He makes Kyle look dirty enough to join Nickelback, for some reason. This issue is a fun read but a little short; it's one of those that ends just as it seems to get rolling. Nevertheless, it's an enjoyable read. 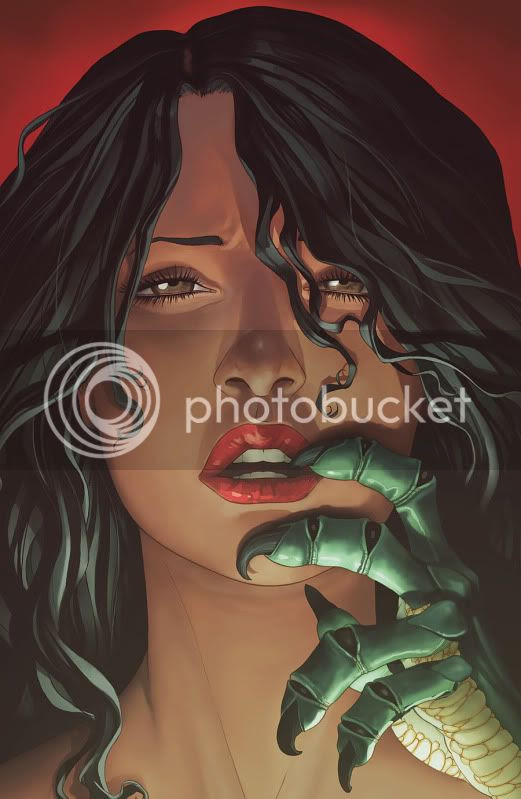 Voodoo #1
This is another title featuring a Wildstorm character I know nothing about, and for most of the issue, it looked like I wasn't going to be interested in learning. The bulk of the issue takes place in a strip club, and the kinds of things that happen in strip clubs happen for a while. Lots of conversation, lots of flirting with nudity,  lots of talk among the strippers, and nothing particularly interesting is going on. It was looking as if Sam Basri's gorgeous art was being wasted by Ron Marz's script... and then everything went crazy. Just when this issue has about bored you to tears, it suddenly does a complete 180 and manages to become kinda interesting. It's not enough to get me to forgive the 17 pages of total boredom, but it is enough to get me back for the next issue. By no means is this one of the better comics of the DC relaunch, but it's a decent pickup if you have $3 burning a hole in your pocket and you've already tried most of the other relaunch titles.
My score: 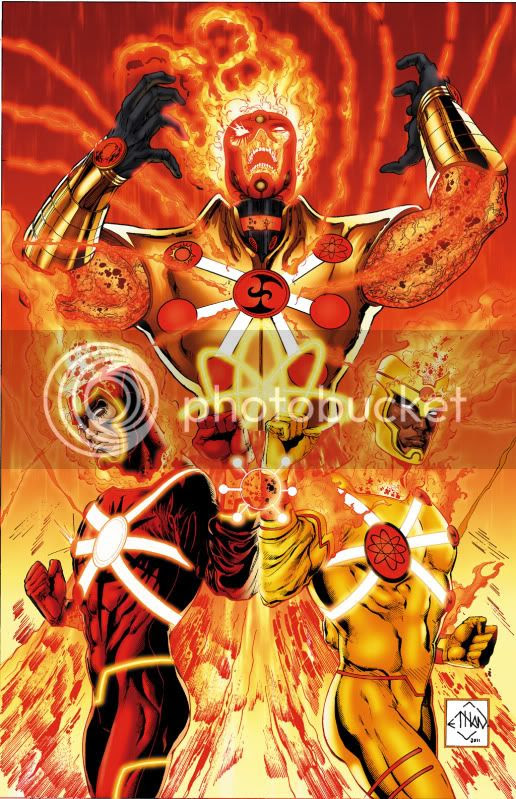 The Fury of Firestorm #1
Co-writers Ethan Van Sciver and Gail Simone reboot Firestorm, using both Ronny Raymond and Jason Rusch, who have each had a stint as the character's alter ego. With artist Yildiray Cinar, they have crafted a fine first issue that is practically bursting with promise. After a rather nasty opening scene, we meet the cast of characters, learning a little about physics as we go. By the end of the issue, Firestorm has made his appearance, but it's not quite like what anyone familiar with the character will expect. This is one of the most drastic revamps of the New 52, and based on this debut issue, I think it's going to work. On top of that, so much happens in this issue that I actually had to check to make sure it was only 20 pages, and that's always a good thing.
My score: 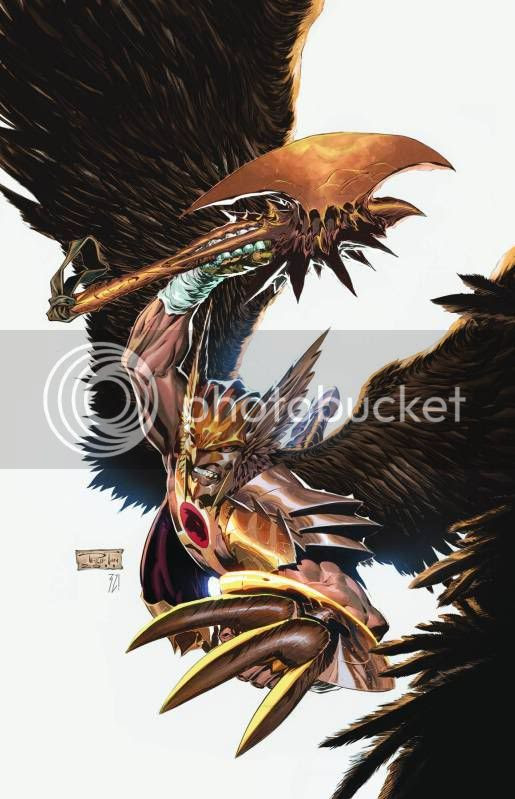 The Savage Hawkman #1
Writer Tony Daniel and artist Philip Tan have put together a pretty intriguing first issue here. It begins with Carter Hall trying to destroy his Hawkman gear, with disastrous results. From there, an alien wreck is uncovered near the Bermuda Triangle, and things kick into high gear. The action comes on fast and furious, and the book has a suitably creepy vibe thanks to Tan's art. There's a little bit of world-building here, but we're never told where Hawkman got his armor and wings, or exactly what Nth metal is. This one might be a little overwhelming for new readers, but it's not bad.
My score: 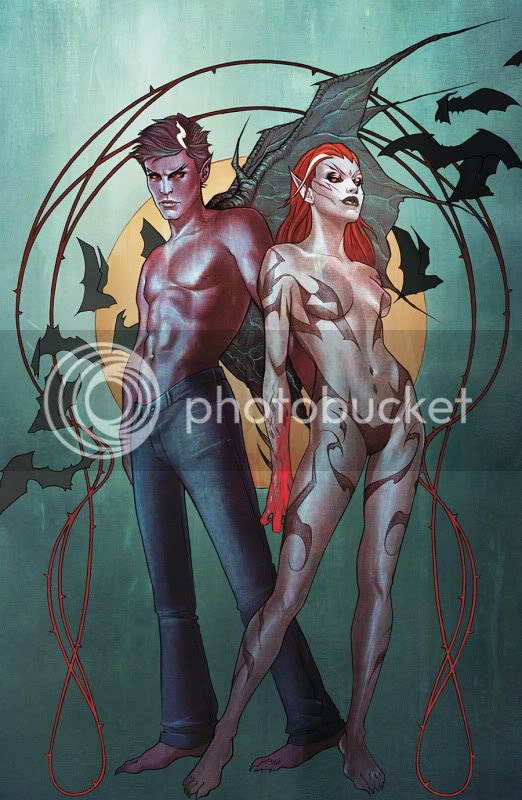 I, Vampire #1
Writer Joshua Hale Fialkov and artist Andrea Sorrentino revive this series, adding a dash of the emo for good measure. I've never read the original I, Vampire series, so I can't say how closely this issue adheres to what has gone before. Andrew spends most of the issue trying to persuade his lover Mary to abandon her plans to wage war against the human world, for which she has assembled an army made up of thousands of vampires. A few flashbacks are interspersed with the present-day action, giving us some background on their relationship. Sorrentino's art is atmospheric and moody, and reminds me of the work of Jae Lee; needless to say, it is utterly appropriate for this book. This issue is pretty much all setup, and it doesn't really tread any new ground, but it's pretty entertaining throughout. Its far from the best title in DC's "The Dark" subline-- Animal Man and Swamp Thing are neck-and-neck for that title-- but it's worth a read if you're interested in the concept at all.
My score: 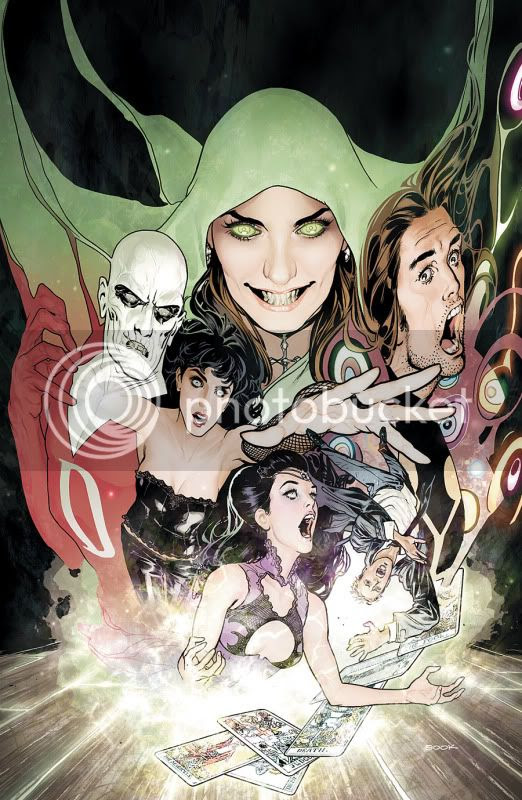 Justice League Dark #1
Awkward title aside, this is one of the Dc relaunch series i was really looking forward to. Wrtier Peter Milligan and artist Mikel Janan do not disappoint. This issue basically takes us on a tour of the magical side of the DCU, and shows how utterly unprepared the traditional superheroes are to deal with it when it turns ugly. The uber-powerful Enchantress has gone batshit insane, and the seer Madame Xanadu is trying to put together a team that can deal with such a threat. So we're treated to John Constantine, Zatanna, Shade the changing man, and Deadman coming together to deal with the situation... eventually. The team isn't quite assembled by the end of the issue, but we have met them all, and things are in motion. Someone who is acquainted with all of these characters should enjoy this issue quite a bit, but new reader-friendly it ain't. If you try this one out and you don't know who any of these characters are, make sure you pull up wikipedia before you start reading. That caveat aside, the issue is a lot of fun, and Janan's art is beautiful. This book ranks right up there with Swamp Thing and Batwoman as the best-looking series of the New 52. The next issue can't get here soon enough!
My score:

And so we end on a high note, with one of the better new series of the DC relaunch. Check back tomorrow for the wrap-up to the New 52!
Posted by Waylon Piercy at 2:00 PM