Here I am with the rest of this week's DC New 52 books for this week; let's hit it! 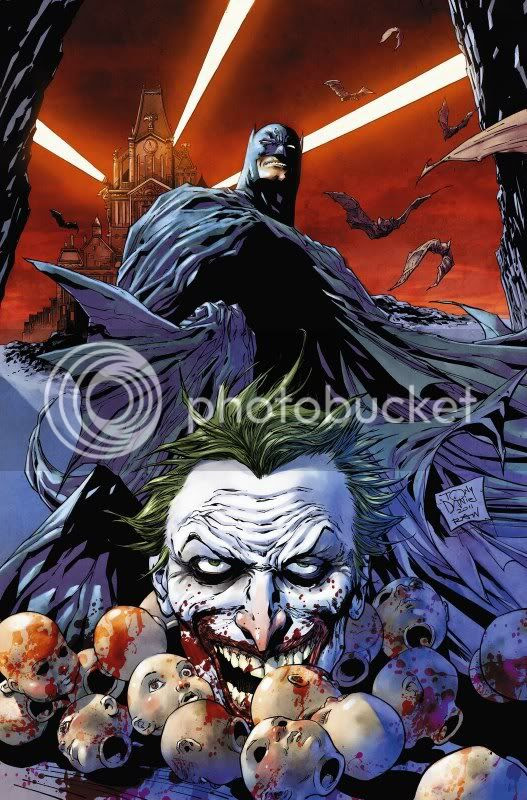 Detective Comics #1
There has been a good deal of griping about tony Daniel's tenure on the Batman books. Batman has been (mostly) in his hands for the past year and a half,  and while I felt the run was decent, others have abhorred it. (Personally, even though I felt his work was decent, I don't feel that "decent" is good enough for one of the flagship titles of the entire comics industry.) When it was announced that Daniel was moving to Detective Comics as part of the DC relaunch, fandom predictably blew a gasket over it. However, the relaunch is a fresh start, so I'm entirely willing to give Daniel a fair shot at impressing me. Did he pull it off?
Well, not quite. Don't get me wrong, this is not a bad comic. The art is quite nice, aside form a few awkward panels. Daniel is turning in the best art of his career in this issue. It's clear that he relishes drawing all the details in the tweaked Batman costume, and he even manages to channel some past masters (perhaps most notably Frank Miller) on a few pages. Visually, this is a very nice book.
The story is where things decline quite a bit. It's really not bad, but it's not great either, and the often awkward dialogue drags it back down to the level of-- say it with me-- merely decent. However, the final plot development at the end of the issue is a definite hook to get you ready for the next issue. It's a solid beginning for a run that will hopefully improve from here. If not, we'll still have Scott Snyder's Batman...
My score: 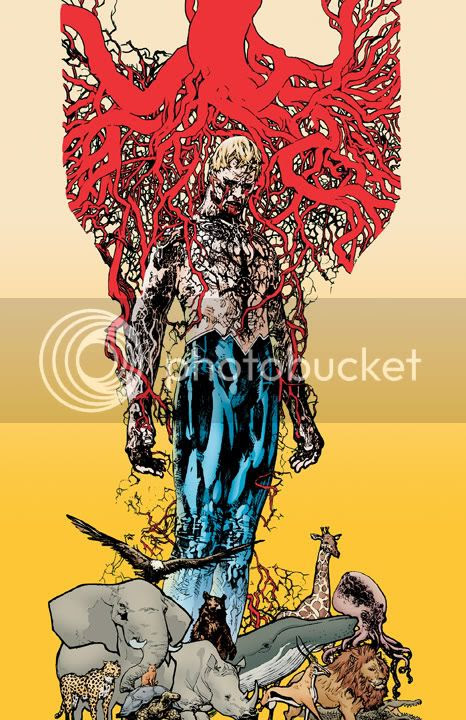 Animal Man #1
Straight from the D-list comes Animal Man! Nearly unique among superheroes, Animal Man is a family man, witha  wife and kids. He is also one of the toughest characters for writers to get a handle on, and his greatest success to date was in the hands of Grant Morrison in his amazing run two decades ago.  That remains the dominany version of the character in the minds of comic readers, and Jeff Lemire wisely uses that as his starting point here. The book begins with a text piece from an interview Buddy has recently given, which succinctly sums up the character for readers who are unfamiliar with him. From there, Lemire weaves a tale that begins as a charming domestic portrait of the Baker family, then quickly turns into a superhero adventure that shows how powerful Animal Man really is. From there, things get creepy. Travel Foreman's art is very appropriate for the story, and truly enhances it. The overal package could serve as a textbook example of how to do a first issue of a comic series properly. 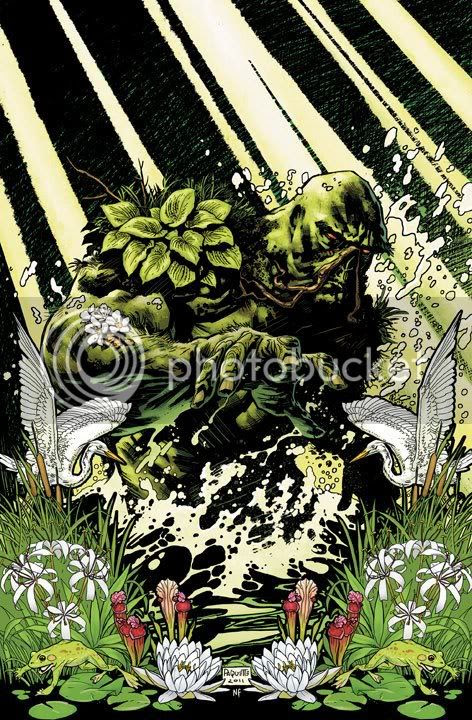 Swamp Thing #1
Swamp Thing has long been denied the DCU, as his comic series have been confined to DC's Vertigo imprint for the past 15 years or so.  The year-long Brightest-Day series returned him to the DCU earlier this year, however, and here we are. Scott Snyder picks thingws up where they left off, and mayhem ensues. Snyder gives Alec Holland a very distnct and realistic "voice," and handles Superman expertly, as well. Yanick Paquette's art is excellent, and we are treated to some truly inventive and dynamic page layouts. Paquette has been one of the better artists working in the comics field for quite a while now, but his work in this issue is easily thes best work I've ever seen from him. I really can't overstate how gorgeous this book is. The team also treats us to a few shout-outs to Swamp Thing's history. This is an intriguing debut issue, and I'm very excited to see where this team takes these characters next.

Hawk & Dove #1
Whew. This was not an easy one to get through. The story is nothing special; Sterling Gates delivers a standard setup for a superhero series. We're introduced to the characters and given the lowdown on what their abilities are, and we witness some action where they get to show off some of those abilities. Hawk is such a thoroughly unlikeable character that it's hard to be interested in him. There are no redeeming qualities to him, and nothing to add any additional interest; he's just a generic muscle-bound asshole. Still, for all of that, the plot of this comic is readable, and not really bad. What really kills it is the "art."
You've surely noticed that I did not post any cover art for this comic. This is for your protection. See, this comic was "drawn" by alleged artist Rob Liefeld. click the link and check out some of what awaits you, I'll wait.
Back so soon? I understand, I can't stand to look at much of it for once, either.  I honestly don't want to turn this into a Liefeld bash-fest; that's been done to death. It's just important to get the point across that the man's work has not improved the slightest bit; the "art" in this comic is no better than what you just looked at. And someone at DC thought he needed to be hired to provide the art for one of their high-profile relaunch titles. Just think about that, and despair. Now, I'll say nothing more about it.
A strong story can often make up for poor art, but unfortunately, we don't get a strong story here. We have a story that is adequate at best, and while some nice art could have buoyed the story enough to make this comic a decent piece of entertainment, what we wind up with is a complete waste of money and time.
Oh, and this comic is one of the titles that has already sold out. Evidently, the crowd who digs "Jersey Shore" has been lured into comic stores.
My score: 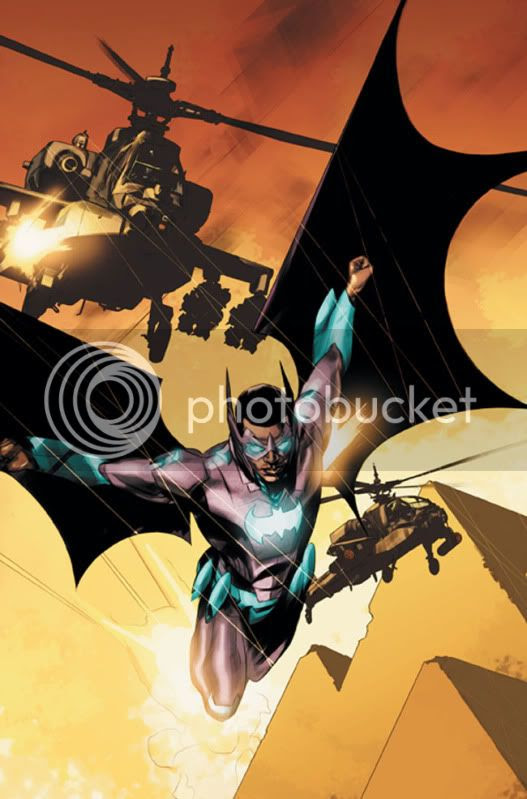 Batwing #1
Grant Morrison has introduced quite a few intriguing new characters in his excellent Batman Inc. series over the past year, and it's high time one of them got an ongoing series. Hence, Batwing. Batman's deputized operative in Africa. Writer Judd Winick is really hit-or-miss; fortunately, this one looks like a hit. This issue covers all the bases it needs to to introduce us to the character and his world, and does so with grace and economy. The art by Ben Oliver, enhanced by Carlos Mangual's colors, give the book a nice, realistic look that suits the somber story that is being unfolded. The idea of getting to see a Batman-sanctioned vigilante operating in such a rarely-used and exotic locale as this really appeals to me, and I hope to see the concept exploited to the fullest in the issues to come. For now, we're off to a good start. 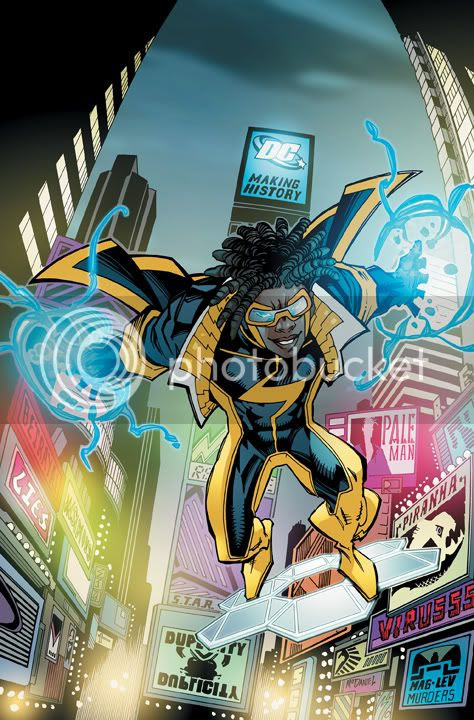 Static Shock #1
I admit it: I have never read any of the comics from the Milestone line. I on;y know Static from his animated series appearances and the guest spots he's had in some DCU comics in the last few years. That aside, I do like the character based on my limited knowledge of him. Hence, this was not one of my most anticipated new titles, but I was looking forward to getting a chance at a new Static series.
Co-writers Scott McDaniel and John Rozum  do a pretty good job here, giving us the requisite introductions to the main character and his supporting cast, and a peek at his rogues gallery. Historically, the DCU has not featured that many titles that are set in New York City, and we already have two launching this month(the other is Hawkman). The location gives the book a look that is slightly different in the DCU, given that we're so accustomed to fictional cities such as Gotham, Opal, and Metropolis. The city and its denizens are rendered by artist McDaniel in his usual dynamic style; the pages practically burst with energy. Jonathan Glapion and Le Beau Underwood's inks don't mesh qith McDaniel's pencils quite as well as some inkers he has been paired with in the past-- John Beatty springs instantly to mind-- but they are more than adequate. Static Shock is a nice-looking book that gives us a decent story and a nice cliffhanger; it's not the best comic DC released this week, but it's good enough that I'm interested in reading the next issue.
My score: 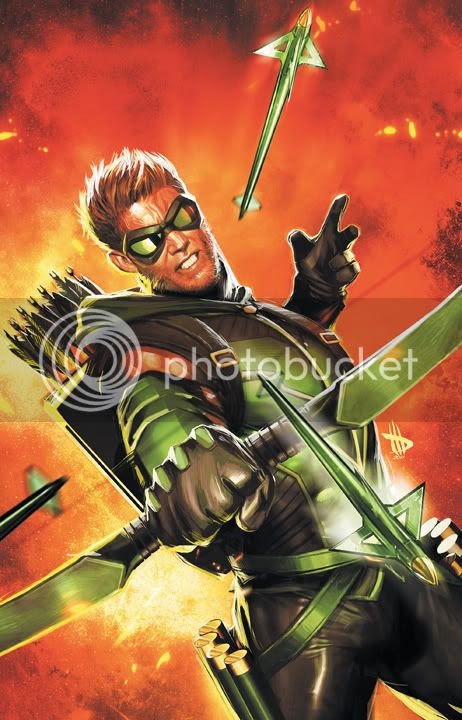 Green Arrow #1
I gotta admit, writer J. T. Krul has not endeared himself to me in the past. I've tried reading several series he has written, and have found them all to be invariably bad. Still, I resolved to give him one more chance with the launch of this new Green Arrow series.
I really should listen to my gut more often.
I hate to put it so bluntly, but this is a bad comic.  A couple of the DC relaunch titles I've read yesterday and today have had stories that were just adequate, but this one is not even on that level. I'm genuinely annoyed with myself for wasting 7 minutes reading this comic. The art does little to mitigate things. Dan Jurgens is a decent artist, but his best days as an artist seem to be behind him. His art is increasingly stiff these days, and George Perez pairs nicely with him as an inker, but that stiffness still shines through. The action scenes, in particular, fare poorly because of this. The art is not bad, but it's not a selling point, either.
I don't want this to turn into a bashfest, so I'll put it this way: if you've never liked any of Krul's stuff in the past, you won't like this either. Leave this one on the shelf; don't waste your time or money.
My score:

It kinda sucks to end this week's reviews on such a sour note, but that's the way it goes sometimes. Swing back by next week, when we'll be looking at the new first issues of Batman & Robin, Frankenstein: Agent of SHADE, Batwoman, Green Lantern, Demon Knights, Mister Terrific, Red Lanterns, and more!
Posted by Waylon Piercy at 11:00 AM