I'm back with the rest of this week's DC New 52 releases! If you missed yesterday's reviews, you can find 'em right here. 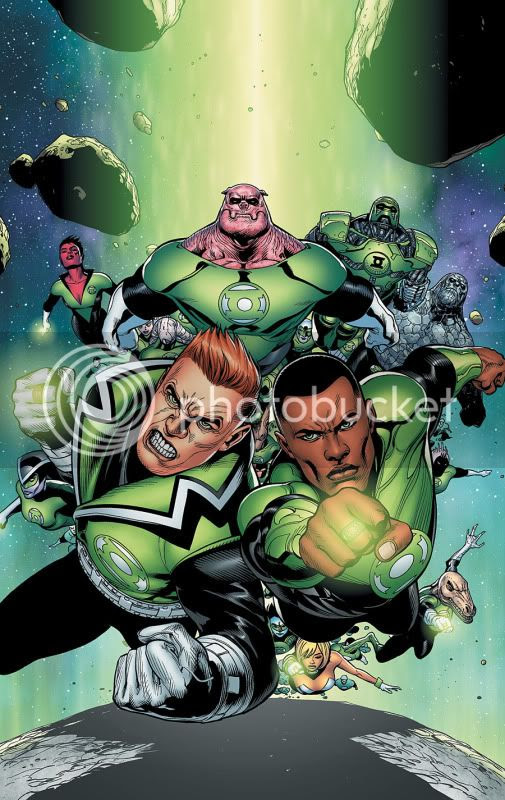 Green Lantern Corps #1
Peter Tomasi is no stranger to the GLC, having served as writer on the previous volume of this series for most of its run. He weaves a story in this issue that serves as a great introduction to the GLC, introducing us to Guy Gardner and John Stewart, along with several other supporting characters among the alien members of the Corps. We also get an explanation of exactly how the universe is divided into its 3600 sectors, how many GLs there are, and a rundown on how the ring works. There's also the setup for a longer story that involves a mysterious antagonist who has a serious mad on for the GLC. All things considered, this would have been a much better choice for the first GL book to ship this month, as it serves as a far better introduction for new readers. Everything you really need to know about the GLC and how it functions is in this issue.
Fernando Pasarin and Scott Hanna deliver some very nice art, with clearly defined characters and rock-solid page layouts. Drawing any GL comic must be a challaenge for an artist, as there are so many alien races to depict, but Pasarin is easily equal to the challenge. This book looks every bit as good as Doug Mahnke's excellent work in last week's Green Lantern. The team has done very solid work here, and if you need an issue to ease you into the GL mythos, this is your best bet.
My score: 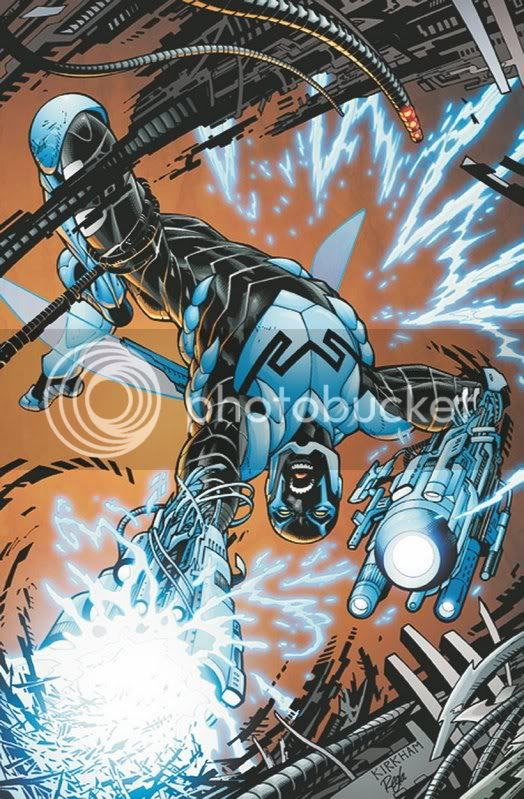 Blue Beetle #1
There are certain things in this issue that will seem very familiar to readers of Blue Beetle's last series, or who have watched the recent animated Batman: Brave and the Bold TV series. The character's origin has been simplified a bit, as it no longer piggybacks on the events of the Infinite Crisis mega-event from six years back(holy hell, has it really been six years???). I usually enjoy writer Tony Bedard 's work, and this issue is no exception. After a nice prologue that shows us just how powerful the Blue Beetle scarab can be, Bedard gets to the business of telling the story of Jaime Reyes, the latest person to possess the scarab. We get to know his family and friends a bit, and then he encounters the scarab by chance as two groups of supervillains are fighting for possession over it.
Ig Guara and Ruy Jose do a nice job with the art. People look a bit awkward here and there, but action scenes are done pretty well and are easy to follow, and the scenes showing the scarab armor in action are impressive.  This issue is simple enough, but there is plenty going on to maintain reader interest and bring me back for the next issue.
My score: 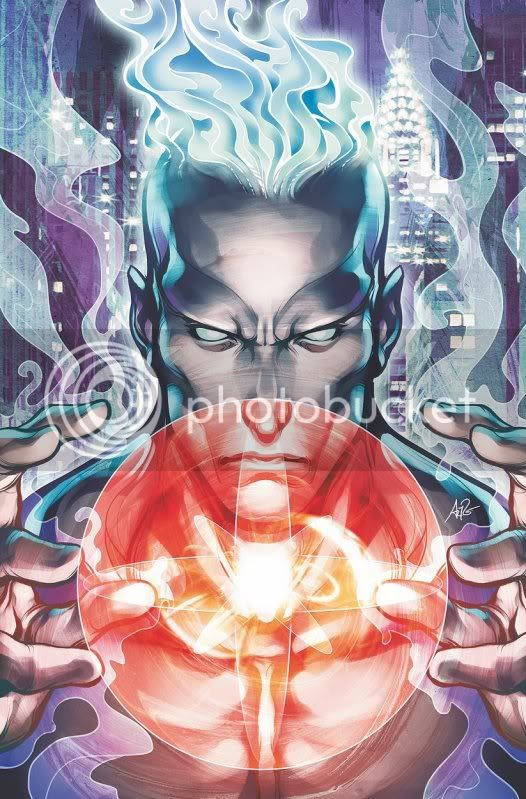 Captain Atom #1
Writer J. T. Krul tackles this Captain Atom revamp, and the result is better than I expected. As you may recall, Krul was also responsible for the dreadful Green Arrow #1. This issue is a much better piece of work, giving us a look into how Captain Atom's powers work, and throwing a complication into the mix to keep things interesting. The comparisons with Watchmen's Dr. Manhatten began the moment this series was announced, and there are definitely some parallels. How things develop from here remains to be seen, however; for now, we have a solid foundation for future stories to build on.
Freddie Williams II's art is very good, as expected. He never gets too creative with the page layouts here, but that is not to the issue's detriment. Special attention should go to colorist Jose Villarubia, whose work perfectly meshes with Williams's art to create a look for Captain Atom that is quite striking. This book isn't Batwoman pretty, but it looks pretty damn good all the same. Captain Atom isn't in the top tier of the best books this week, but I'll be back next issue.
My score: 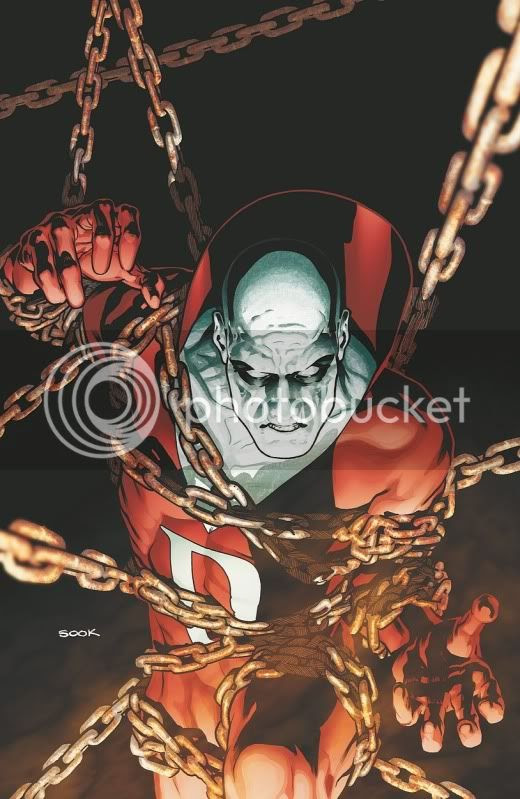 DC Universe Presents #1
Featuring a revolving door of characters and creators, readers of DCU Presents can count on a new story arc featuring a different character every few issues. Deadman gets the nod for the initial story arc, and writer Paul Jenkins gives us a thoughtful tale that gives us a deeper look at exactly what Deadman is up to when he's not helping out his superhero buddies. Deadman's origin is also succinctly retold, and all of it is topped off with a cover by the inimitable Ryan Sook.
The interior art ain't bad either, with Bernard Chang doing his usual great work. Chang's art has a slick, clean look that is always a pleasure to look at, and he truly brings Jenkins's story to life. Deadman is not in the upper echelon of DC superheroes, but hopefully the publicity of being relaunched as part of the New 52 will bring him, and this very good comic, some well-deserved attention.
My score: 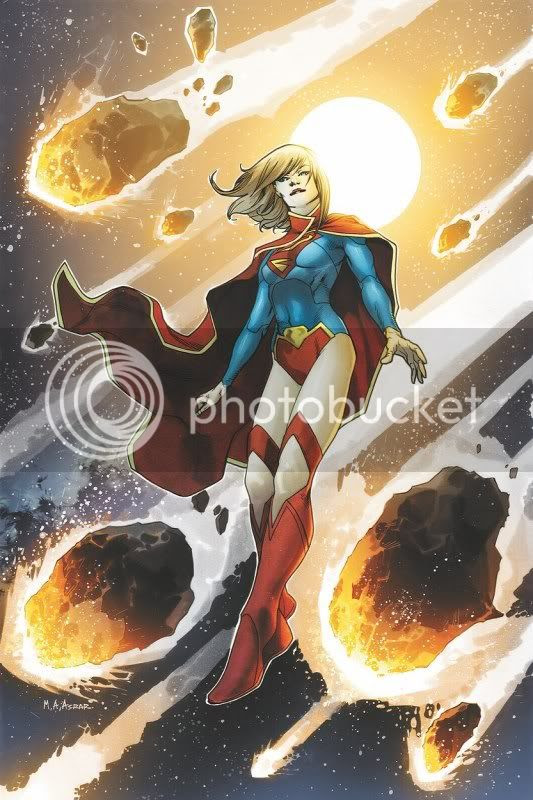 Supergirl #1
Often revamped and relaunch, Supergirl gets another go in this new series. Judging by a few elements of her redesign, I suspect this new Supergirl is intended to be an amalgam of Power Girl and the traditional Supergirl. How well that works out remains to be seen; for now, this debut issue is a pretty good introduction to the character. Not a whole lot happens, but what does happen is rendered well by writers Michael Green and Mike Johnson and artist Mahmud Asrar. Accompanied by an escort of meteorites, Kara lands on earth in violent fashion, and is every bit as confused as everyone else about what is going on. Exposed to earth's yellow sun, her superpowers beghin to kick in, wreaking havoc with herself, and among the team sent to extract her. A possible source of help arrives, but as we're talkin' comics here, things are likely to get worse before they get better!
The art and writing mesh very well in this issue, and the result is a beautiful book that moves at a brisk pace. As Kara's powers kick in one by one, each is nicely rendered by Asrar and colorist Dave McCaig. Not quite as much happens as in last week's Superboy, but I find the overall comic and presentation a bit more enjoyable.
My score: 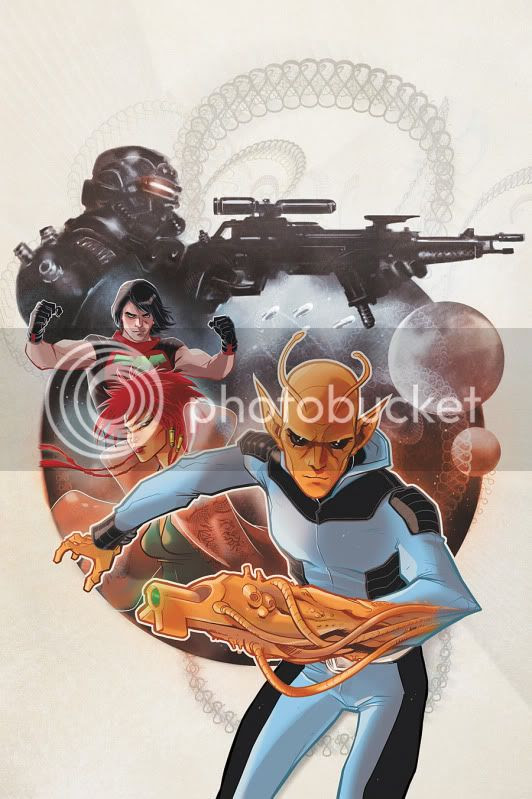 Legion of Super-Heroes #1
Before we dive into this one, a confession: I really don't give a damn about the Legion of Super-Heroes. I've tried to read the comics a few times over the years, but they never did much for me. I tried to get into the animated series a few years back, but despite the cool Superman X character and the show making far better use of Imperiex than any comics ever did, it still didn't do a whole lot for me. I enjoyed the episode of Justice League Unlimited the LOSH was in, but the characters still just didn't grab me. Last week's Legion Lost was a decent, if hectic, comic, but still did absolutely nothing to get me invested in the Legion. No matter what I've read or watched, the Legion remains the one corner of the DCU that I'm just not interested in.
With all that said, I still wanted to give the series one more try with the DC relaunch. The book is certainly nice to look at, filled with gorgeous art by Francis Portela. Some of the pages get very crowded with lots of different characters,  but Portela keeps the action easy to follow. In the hands of a lesser artist, this book could easily have become a jumbled mess.
The story certainly seems to be crafted well enough, but it's rather dull. This is one of the few series whose continuity has not been affected by the DC relaunch-- understandable, since the Legion has been one of the most revamp-happy franchises in the comics world for the past few decades, and the current revamped version was established very recently-- the result is that the book is impenetrable to a new reader. There is a lot of talk about casualties and disasters in the recent past, so apparently, this issue begins in the aftermath of some pretty big throwdowns. It amounts to a bunch of people we don't know talking about things we don't know anything about, and the entire thing just feels hollow. It does absolutely nothing to get me interested in the Legion, and I feel no desire to read the next issue. I know who a few of these characters are, and I still barely know what's going on in this issue. I truly pity any readers new to comics, or to DC, who pick this issue up. I'm sure the issue is good enough for people who have been following the series, but as a debut issue that is part of a very high-profile company-wide relaunch, it fails.
For all of that, there is still nothing truly awful about the issue, so I won't give it a really bad score. I briefly entertained the thought of picking up the next couple of issues to see if it got any more enjoyable, but with so many new titles jostling for my attention, I just can't justify spending the time on a comic that makes new readers try so damn hard to get into it. This one isn't awful, but it's definitely for Legion afficianados only.
My score:

That's it for this week! With the first 39 of the new 52 released, there are only four comics I won't be picking up again next month. That's a damn good showing, and hopefully next week won't include any more duds. Come on back next week for the debut issues of All-Star Western, Batman: The Dark Knight, Aquaman, The Flash, Justice League Dark, Blackhawks, Superman, Green Lantern: New Guardians, and more!
Posted by Waylon Piercy at 11:00 AM