We've got thirteen first issues to look at this week, so I'll be splitting 'em up. Look for part two tomorrow! 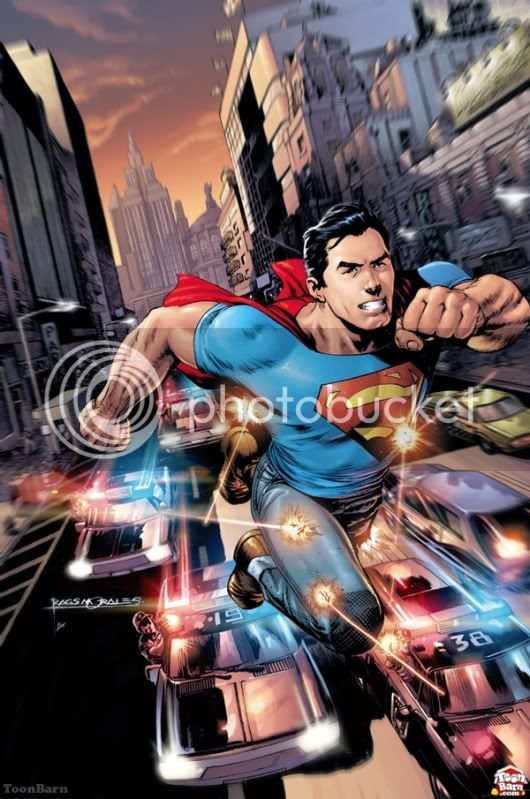 Comics god Grant Morrison and artist Rags Morales' relaunch of the series that gave the world its first superhero has been one of the most hotly anticipated titels of the DC relaunch. I'm happy to say that it completely lives up to the hype.
I'll start by employing a cliche: This ain't your father's Superman. No, it's your grandfather's Superman, the original, less-powerful, social activist, wonderfully filtered through the mind of Morrison. The title is not a misnomer, as action abounds in this issue; in typical Morrison fashion, there is a lot more going on if you look a little deeper. More than any other writer working today, Morrison's comics grow better and better the more you re-read.
With Morales handling the art, the book is obviously gorgeous. One of the best and most underrated artists working today, Morales' style is realistic, but with a slightly cartoonish edge that is ideally suited for a modern Superman story. His characters have real "weight," and his page layouts are impeccable. I can hardly think of another artist who would be as good a match for this series.
Action Comics #1 gives us everything we want in a Superman comic, and more. There is even a nice reference to the very first Superman story, way back in the original Action Comics #1. If you only get one comic this week, make it this one. 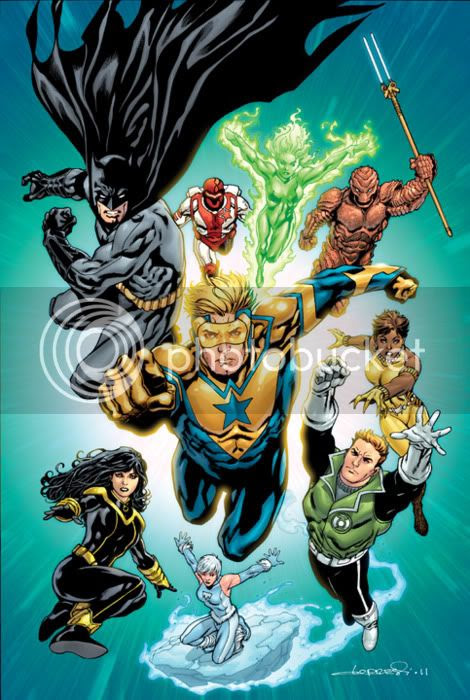 Justice League International #1
(Note: the cover image to the left is the one originally shown when this title was announced. For whatever reason, the woman in black was removed, then replaced by Godiva on the final cover.)
The JLI finally returns, months after being set up in the Justice League: Generation Lost series that wrapped up in April. The lineup for the team promises to be interesting, with a good mix of characters you'd expect in a JLI comic, and a few wild cards tossed in for good measure. With a roster made up of Batman, Booster Gold, Vixen, Green Lantern Guy Gardner, Japan's August General in Iron, Russia's Rocket Red, Sweden's Ice, and Britain's Godiva, some sparks are bound to fly. We get a taste of that in this issue.
Unlike last week's Justice League #1, no time is spent slowly getting the characters into position. The team is quickly formed, then embarks on its first mission. Aaron Lopresti's art is adequate; his style is not too flashy or spectacular, but his layouts are solid, and the art is more than serviceable. (I feel it must be said, however, that Booster's new costume is a perfect example of a needless redesign that does not improve on the old design the slightest bit. I tend to like a lot of the new costues, but this is not one of them.) Writer Dan Jurgens is certainly familiar with most of these characters, having handled several of them for extended runs on various titles in the past. Jurgens turns in a story that is pretty much what I expected, given his track record: nice and solid, but unremarkable. That may sound like a backhanded compliment, but I don't mean to slight his work here; JLI is a good, solid superhero comic that holds your interest, and promises more to come. Several subplots have already been set rolling, and things are sure to get only more interesting in subsequent issues.
My score: 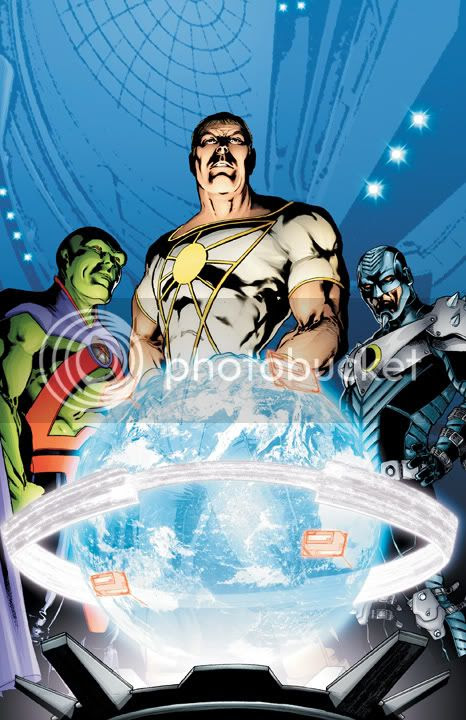 Stormwatch #1
We move now to a very different team series. Writer Paul Cornell brings this Wildstorm series into the DCU, and the results are definitely interesting. Cornell certainly sets a brisk pace; in this issue alone, we see the moon preparing to attack the earth(yes, you read that right), a gigantic spiky worm-thing is discovered in the arctic, and Martian Manhunter and friends attempt to recruit the superpowered vigilante Apollo into their ranks. Crnell does a good job giving us a sense of who each of these characters are; I am unfamiliar with the Wildstorm characters, but I feel that I have a pretty good sense of who most of them are after reading this issue. Miguel Sepulveda's art is nize and slick, with a dark edge that fits the story quite well. Each of the characters remains distinct, even theones who are not wearing superhero costumes, something many artists seem to struggle with.
I was looking forward to this series based on my enjoyment of Cornell's past work, and he did not let me down. It's a fun book that is practically bursting with potential, and I can't wait to see what comes next.
My score: 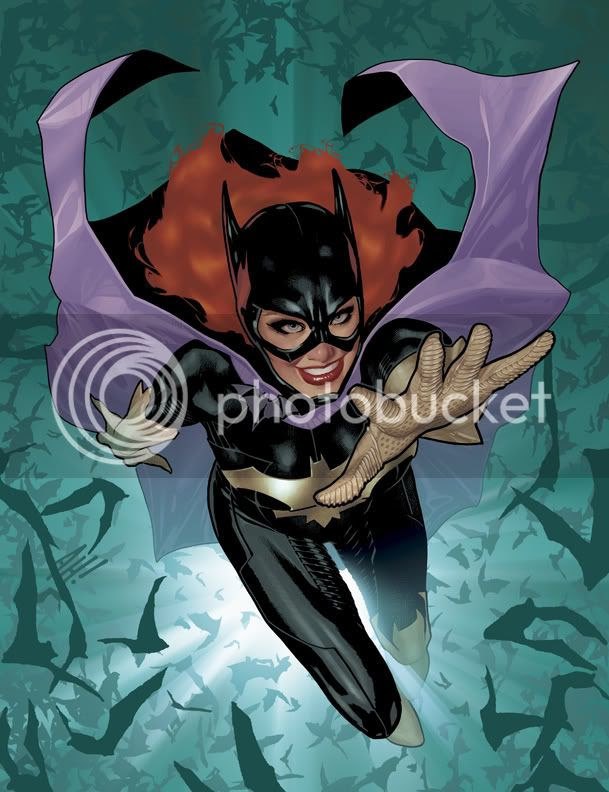 Batgirl #1
And so we come to one of the most cntroversial of the relaunch titles. Give this a quick read if you're unaware of exactly why, and you'll be up to speed. Personally, I feel that making Barbara Batgirl once again, particularly ince we already have a fairly new Batgirl who has quickly become a fan-favorite, is just regression. That doesn't change the fact that it happened, so putting that aside, I dove into the first issue. Surely, if anyone could make this work, it's Gail simone.
Thankfully, she pulls it off. Simone wisely avoids using any magical or comic-book science deus ex machina to cure Barbara's paralysis. Barbara's former handicap, and the event that caused it,  understandably loom large in her mind. There are a couple of events in the issue that hammer the point home, none more effectively than the moment when Barbara freezes up as a gun is pointed at her, aimed at the same spot where she was shot before.
The art by Ardian Syaf and Vincente Sifuentes is very pleasing to the eyes, detailed and dynamic. Batgirl's new costume design is one of the good ones; overall, the Batman family of characters are best suited for the detailed and layered designs that are becoming increasingly common as part of the DCU relaunch, and Batgirl is no exception. The costume looks functional and practical(as practical as any superhero costume can, anyway).
There were several major hurdles to overcome with this issue, and Simone soars over them deftly. I still don't think this regression was the right move, but the fact is that it is happening, so we must make the best of it. Fortunately, it looks like we'll have a damn good Batgirl comic as a result(even if it is damn odd seeing Jim Gordon in the present day with red hair).
My score: 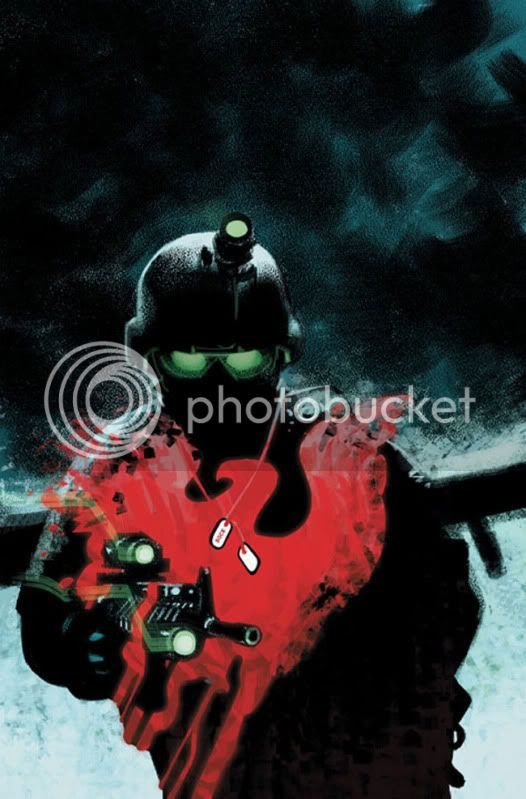 Men of War #1
This first issue of the modern-day war series shows us how the grandson of the WW2 hero Sergeant Rock becomes a Sgt. in his own right. As part of a mission where the squad encounters an unnamed, and barely seen, super-powered being, things quickly turn bad. There's a bit of characterization, and a lot of action. Writer Ivan Brandon keeps things moving, and and Tom Derenick delivers a solid art job that is enhanced by Matt Wilson's muted color pallette.
In the backup story, Jonathan Vankin and Phil Winslade bring us a tale of Navy SEALS in combat. It's short and sweet, but that's about what you expect in 8 pages. It's billed as "part 1 of 3," and this introductory chapter does a good job of piquing your interest enough that you just might come back for more.
Overall, a solid first issue. This is not one of the titles I was most interested in, but I do enjoy war stories when they're done very weel, and this issue was good enoguh that I'll be checking out the next issue.
My score: 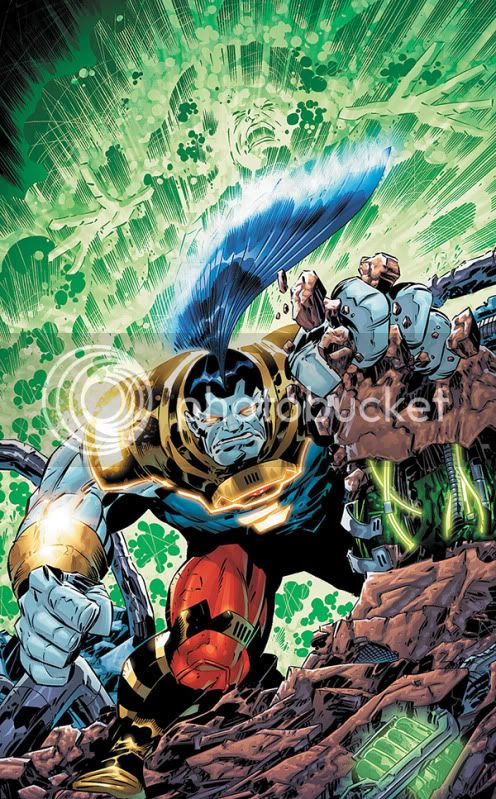 OMAC #1
Co-written By Keith Giffen and Dan Didio, with art by Giffen, OMAC is one of the true wild cards of the DC relaunch.  OMAC is a character that has been revisited and revamped numerous times over the years, and handful just in the last 5 years alone. However, with Giffen channeling the great Jack Kirby for all he's worth, it was sure to at least be a visually stunning series. It most certainly is that; from cover to cover, the book is a veritable orgy of crazy Kirby-esque goodness. Simpkly put: OMAC's a real purty comic book.
The story is pretty straightforward, but that is by no menas a bad thing. We are thrust directly into the action, and introduced to a bunch of characters in short order. The result is a quick, fun read that lays the groundwork for plenty of futre mayhem. The blurb for the second issue promises that "things get weird;" I'd say we're off to a good start.
My score:

That's it for today, but be sure to come back tomorrow for the remainder of this week's New 52 books!
Posted by Waylon Piercy at 7:33 PM