We've got six more comics to cover today, including two of the ones I was looking forward to the most. Here we go! 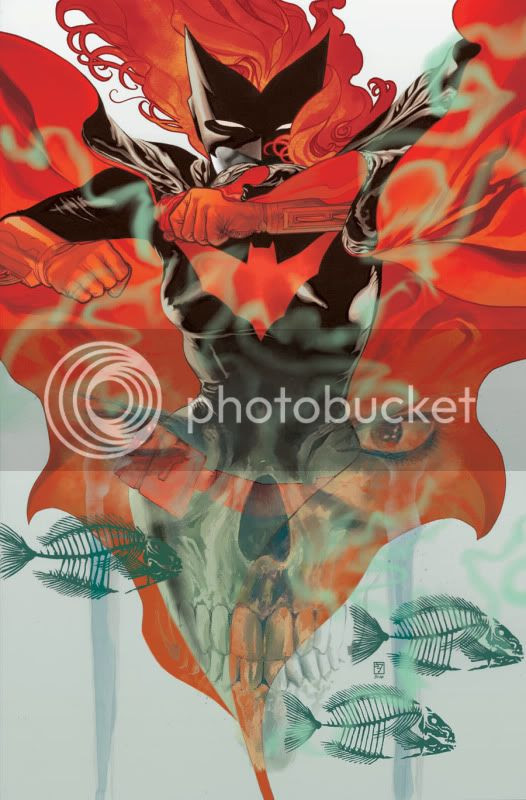 Batwoman #1
This one has been a looong time coming. The Batwoman ongoing series follows directly in the footsteps of her adventures from her starring stint in Detective Comics a couple of years ago. (If you haven't read the wonderful Elegy yet, what the hell are you waiting for? Go do that NOW!) This ongoing series has been delayed several times-- the #0 issue, which serves as a prelude, came out in November-- and it was finally rescheduled to debut as part of the New 52. The anticipation has been mounting, and this comic meets it all the way. J. H. Williams III (co-writer and artist) and W. Hayden Blackman (co-writer) have done an outstanding job on this issue, on the level of the work Williams did previously on this character with writer Greg Rucka. Batwoman is investigating an apparently supernatural nemesis who is snatching children, as well as training her cousin-- the former Teen Titan Flamebird-- as her protege. There is a bit of recapping woven into the story to help new readers. The book is gorgeous, which is no surprise with Williams supplying the art. He is easily one of the finest artists in the medium, and Batwoman has gotta be the best-looking book you'll find this month. It's action-packed, and at the same time, beautiful and haunting.
My score: 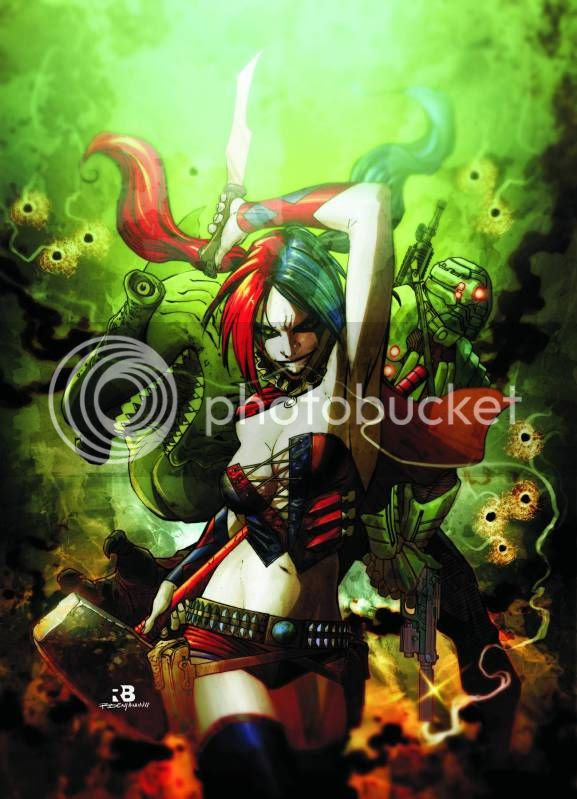 Suicide Squad #1
This is one of the more hotly-debated of the relaunch titles, based on a few factors: 1. Since it features several of the same characters, it's been assumed that the beloved Secret Six was cancelled to make way for this series. 2. The costume redesigns have not been poular, particularly the skanked-up Harley Quinn. 3. Writer Adam Glass also wrote the Flashpoint: Legion of Doom series, which was thoroughly lousy. Fortunately, this book is a good deal better than many people were expecting. It's nowhere near good enough to make me stop wshing we had gotten a  relaunched Secret Six title in its place, but it's far, far better than that FP: LOD series.
The plot shows the team undergoing torture at the hands of an unidentified group, which gives the opportunity for some character-establishing flashbacks to familiarize us a bit with the team. Deadshot is the cocky badass he should be, Harley is the unbalanced lunatic we expect her to be, and King Shark is, uh, hungry. A new El Diablo, Black Spider, and the elctrically-powered Voltaic round out the team. The ending of the issue is on the predictable side, but it's not bad at all, and serves as a fitting framework for introducing the cast to us. That's one of the most important things a first issue is supposed to do.
Federico Dallochio's art is quite nice, and suits the tone of the comic very well. He presents a far more attractive, Angela Bassett-esque Amanda Waller than we're used to seeing, but I suspect that was an editorial edict. Many, many people have been expecting this series to be terrible-- I didn't have high hopes for it myself-- and while it's not outstanding, it's pretty good. It's not in my top three for the week, but if you feel like sampling some of these new series beyond the absolute top few, then I would recommend it.
My score: 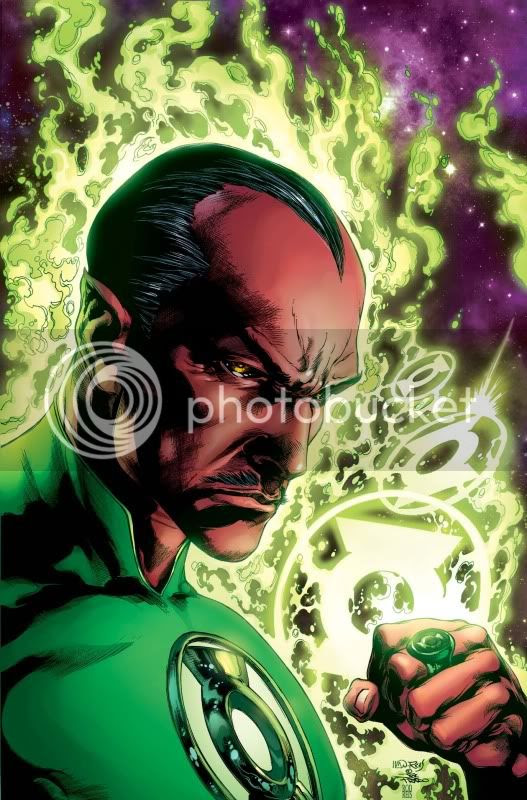 Green Lantern #1
Picking up right where this summer's War of the Green Lanterns storyline left off, Sinestro is now a Green Lantern again, and Hal Jordan, he of the cardboard personality, has been stripped of his ring and left to pick up the pieces of his life on earth. The issue of Sinestro running around with a GL ring is addressed, as well as the reception that's likely to get him among his former underlings in the Sinestro Corps(time for that bunch to get a new name, apparently). Meanwhile, Hal makes an absolute mess of things at home. The biggest problem with this issue is that it spends far too much time on the mundane business of Hal bungling his personal life, when I (and I suspect the vast majority of readers) am far more interested in what Sinestro is up to. Sinestro is now the titular Green Lantern, so having fully half the issue focus on former GL Hal just feels wrong.
That aside, the issue is still quite enjoyable, and that is thanks in no small part to the always wonderful art of Doung Mahnke and inker Christian Alamy. Every panel looks nice, but the art really shines in the scenes set on Oa or in space. (Doug Mahnke was born to draw monsters and zombies, I tell ya!) The new status quo is quite intriguing, and promises to get even more so from here. I've been sticking with this series for years now, and it's giving me no reasons to go anywhere just yet.
My score: 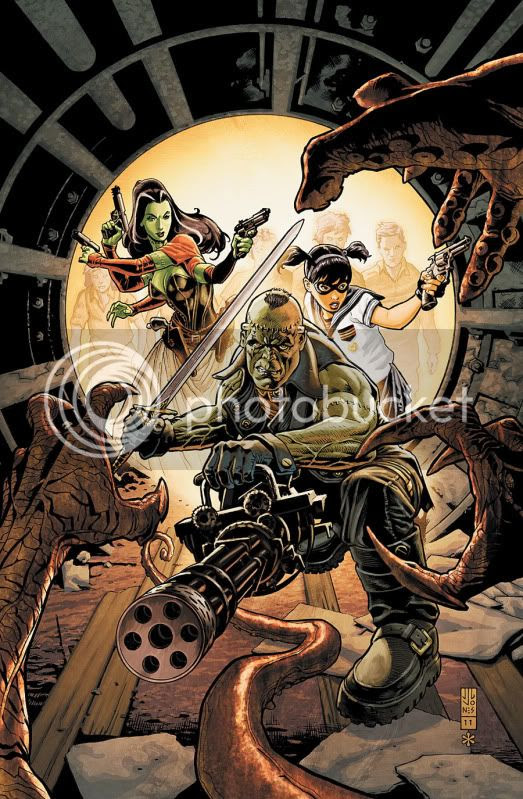 Frankenstein: Agent of SHADE #1
This is one of the new titles I was most looking forward to. When Grant Morrison introduced this version of the Frankenstein Monster as part of his Seven Soldiers event several years ago, I kept hoping someone would come along and give that wonderful character his own series, maybe even Morrison himself. Well, it took a few years, but it's finally happened. Jeff Lemire has already proven himself worthy of writing the further adventures of Frankenstein with the Flashpoint: Frankenstein and the Creatures of the Unknown miniseries. I'm pleased to see several of the interesting characters he created for that series popping up in this one as well, now that we're back in the "real" DCU. Frankenstein is sent into a warzone in which giant flesh-eating beasts have overrun an entire town, and the Bride has already disappeared as she was nearing the source of the monsters. Frankenstein is joined by his new field team: Dr. Nina Mazursky, a Gill Man-esque amphibious woman, Warren Griffith, a werewolf, Vincent Velcoro, a nosferatu-esque vampire creature, and Khalis, a cool mummy. This issue is packed with cool stuff, from the Ant Farm, SHADE's very swank HQ, to the titular monster himself. Alberto Ponticelli's art works well for the book, and his style reminds me of Guy Daivs. That ain't bad at all, especially for a monster comic. (Although the thought of cover artist J. G. Jones doing the interiors for this book does make me drool...) In a week of comics that is even stronger than last week, Frankenstein is already shaping up to be one of the new 52's best. I just hope this fun new series doesn't get lost in the shuffle among some of the higher-profile books.
My score: 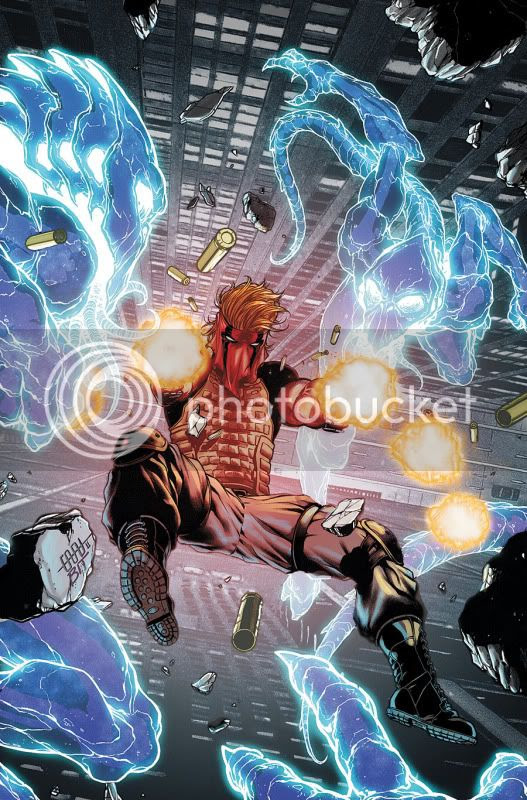 Grifter #1
Another Wildstorm character is integrated into the DCU with this series. I know virtually nothing about Grifter, other than the fact that he does what his name implies. Alas, my hopes for a hobo protagonist who travels from town to town, bindle over his shoulder, conning people out of enough money to make the next town, were dashed. What we have instead is a super-powered version of They Live. It's not half bad. Writer Nathan Edmondson thrusts us right into the action, as Grifter gets into a fight on an airplane with two creatures who look like normal people to everyone else. Branded a murderer, he is wanted by the authorities for killing the violent homicidal monsters that only he can detect. A more interesting scenariogo unaddressed: is this really happening, or he insane? Since this is a superhero comic, I'm sure it'll be the former, but the latter possiblity would make for some damn interesting comics.
Cafu's art is very nice, and the brief looks we get of the monstrous antagonists are suitably cool and creepy. Wth a decent story that has a nice hook and some very nice art, Grifter emerges as a solid middle-of-the-pack book.
My score:

Mister Terrific #1
Mister Terrific finally gets his own ongoing series with one caveat: all his history with the Justice Society? It's gone, baby. Fortunately, the character emerges pretty much unscathed. It's a shame to lose his history with the JSA, but those stories are still there if you want to read them(and I'm one of the people who will be revisiting them, there was some great stuff in that series). In a very efficient debut issue, writer Eric Wallace gives us a quick action scene, Mr. Terrific's origin, introduces us to Mr.Terrific's very cool HQ, and sets up a new villain and the threat against Michael himself for the next issue. Wallace also puts Michael's supporting cast in place, including the familiar face of Karen Starr, who sadly, is apparently no longer the superpowered Power Girl. (The issue does not come right out and say for certain, but there is one scene in the comic where she surely would have been flying into action if she were capable of doing so.) Despite all that, it never feels as if the reader is being info-dumped on. Very efficient use of those twenty pages!
The art by Gianluca Gugliotta and Wayne Faucher is pretty good for the most part, aside from one odd panel where it looks like Michael has the hindquarters of a horse-- seriously, check out page 9!-- and a few spots here and there where some characters' faces come off a little soft and melty. Those few hiccups aside, the book looks pretty nice.
This is another of those series where I really did not know what to expect. I am unfamiliar with the work of Eric Wallace, and didn't really have anything on which to base my expectations. I've always liked Mr. Terrific though, so I hoped for the best. Thankfully, this is a fun debut issue, and if it can keep to this level of quality, I can see it becoming one of my favorite ongong series.
My score:

Overall, I feel that this was a stronger week for the DC relaunch than last week. Considering we had Action Comics, Swamp Thing, and Animal Man last week, thats saying something! The quality across the line seemed a bit higher this week, with no real stinkers at all, as opposed to last week's Green Arrow and Hawk and Dove. Hopefully next week will be even better! We'll be looking at the debut issues of Batman, Birds of Prey, Catwoman, Green Lantern Corps, Nightwing, Wonder Woman, and more! Be sure to come by and check it out!
Posted by Waylon Piercy at 1:00 PM