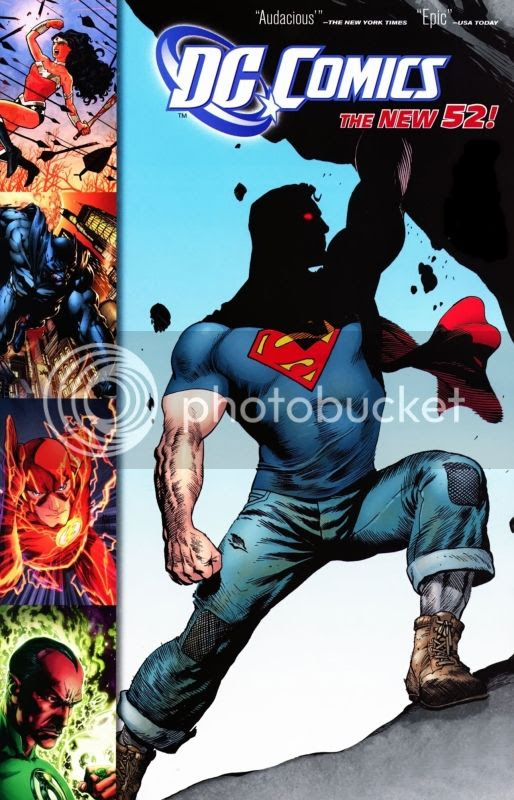 All 52 titles have been released, and the DC relaunch appears to be a huge succes, for the first month, anyway. Every single one of the new 52 sold out at the distributor level before they even went on sale each week, and some books have had to have third, or even fourth, printings. Hopefully, things won't drop off too badly in the months to come. For now, the DC relaunch looks to be one of the very best things to happen to the comics industry in quite some time.

I'll leave analysis of the sales figures and such to people who are more qualified. For my part, I've enjoyed reading so many new seires, and seeing all the discussion and enthusiasm (well, for the most part) from so many people, including a bunch who are altogether new to comics. After reading and reviewing all 52 new series, here's how they break down for me:

I don't wanna read this, and you can't make me!!
Green Arrow
Hawk and Dove
Red Hood and the Outlaws
Legion of Super-Heroes
Teen Titans

Out of 52 comics, there are only five that I don't care to read again next month; that's not bad at all! Even some of the "on the fence" titles will get at least 2-3 more issues to impress me, depending on exactly how "on the fence" they are. The biggest surprises for me were Superboy, Deathstroke, Captain Atom, Grifter, and Voodoo; I had either low expectations or no expectations at all for each of those books, and they all wound up being fairly interesting in the end.

That's it for today; I just wanted to gather my thoughts about the whole thing and get them posted for the record. I'll continue doing the weekly comic reviews, now that I've gotten back in the habit, but I'll most likely make them a bit briefer from here on out, except for special cases.  Be sure to swing back by tomorrow, when 31 Days of Halloween kicks off!
Posted by Waylon Piercy at 1:00 PM