Here's the first batch of this week's DC relunch comics; check back tomorrow for the rest! Let's hit it! 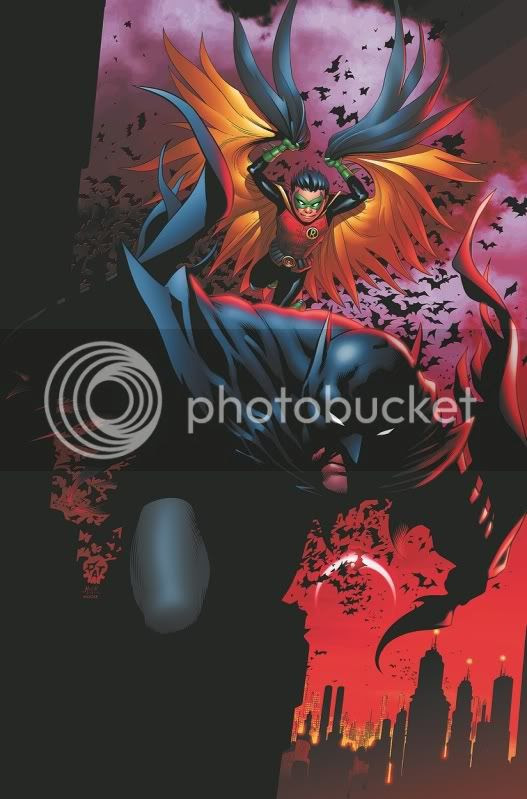 Batman & Robin #1
Peter Tomasi and Patrick Gleason return to this fan-favorite series in time for the relaunch. Now that Dick Grayson is back to being Nightwing, Bruce Wayne is the titular Batman, and we get to see him actually work with his son Damian, the current Robin, for the first time. It's rather jarring for both of them. Where Damian and Dick had developed a mutual respect for one another over time, Damian is having to earn his father's trust here. He's learning that working with his father is quite different from working with Dick. While I wish Dck had continued to be the Batman of Gotham while Bruce tended to his globetrotting team-building in Batman Inc, I understand the reasoning behind returning to a single Batman with the relaunch. If the interplay between Bruce and his son continues to be protrayed as well as it is in this issue, that will go a long way toward making up for the change.
This issue is very well-paced, and a lot happens within its 20 pages. We get a glimpse of Moscow's Batman Inc. operative, Dick takes Damian along to visit spot in Crime Alley where Batman was born, and the duo foil a plan to cause a nuclear meltdown. Tomasi is one of the few writers who seems to "get" Damian, and the developing relationship between he and his father remains very interesting. Gleason's art is very nice, as we've come to expect. This is one of the best-looking books out there. There is no shortage of Batman books to choose from, but this one definitely deserves to be on the shortlist for those who only want to follow one or two of them. 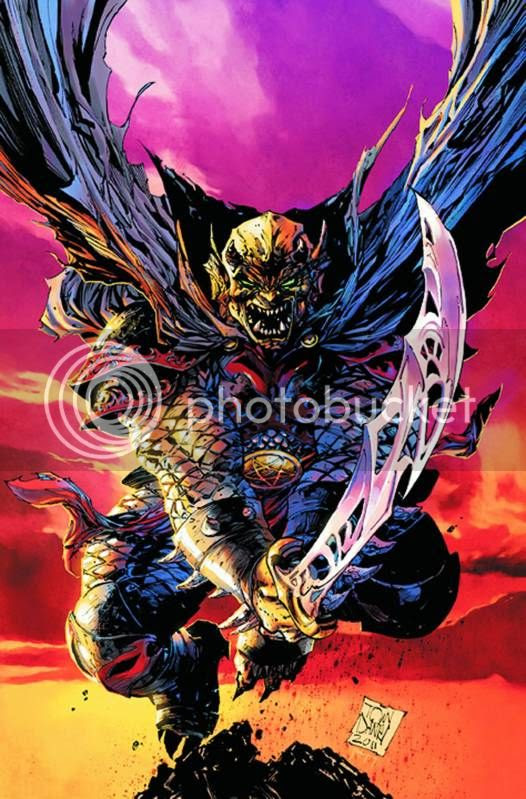 Demon Knights #1
As part of DC's "The Dark" line, this was one of the new titles that had most piqued my interest. Writer Paul Cornell  was part of the reason, as I've enjoyed his work in the past, but one of the biggest attractions was definitely the eclectic cast of characters. With a cast including the demon Etrigan, Madame Xanadu, Shining Knight, and Vandal Savage, things promise to be very interesting indeed. We don't quite see them all come together in this debut issue, but there is plenty to get readers hooked. Beginning with the fall of Camelot, we see how Etrigan was bound to Jason Blood in the first place. From there, the story moves to the dark ages, where a wicked queen is ravaging the countryside in pursuit of some unnamed goal. She is aided by a familiar face. The art by Diogenes Neves and Oclair Albert pretty good, but comes off rather stiff in places. The style suits the tone of the story though, as well as the era in which it takes place. This was a fun issue, and I'll definitely be returning for more next month.
My score: 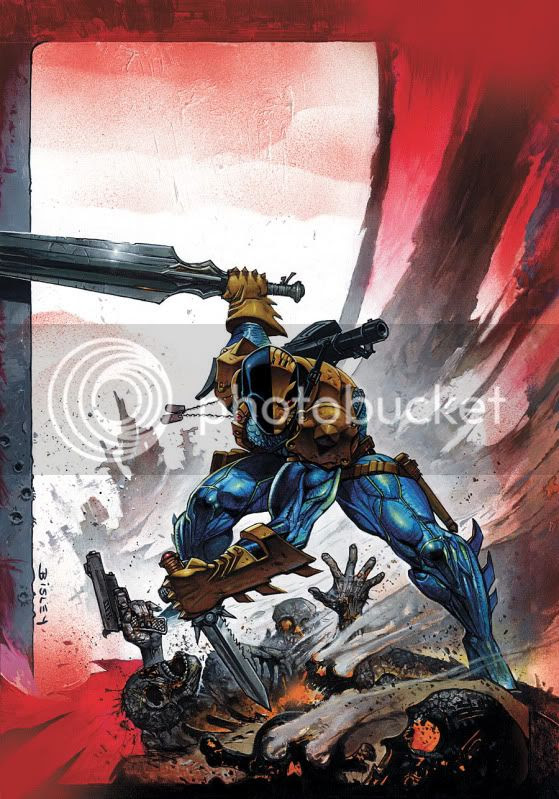 Deathstroke #1
This was one of the DC relaunch series for which I had no expectations. I'm unfamiliar with writer Kyle Higgins, and a book about a merciless assassin could be very good or very bad, depending on the ability of the writer. This book is somewhere in between. Higgins wastes no time throwing us into the action, and things move briskly. There are a few plot twists along the way, and one mystery left dangling for future issues. The result is an energetic issue that entertains, but little of it sticks. The art by Joe Bennet and Art Thibert is above average; Bennet has proven himself a solid artist in the past, and Thibert's inks work well with his pencils. This is not the best of the new 52 so far, but it's far from the worst.
My score: 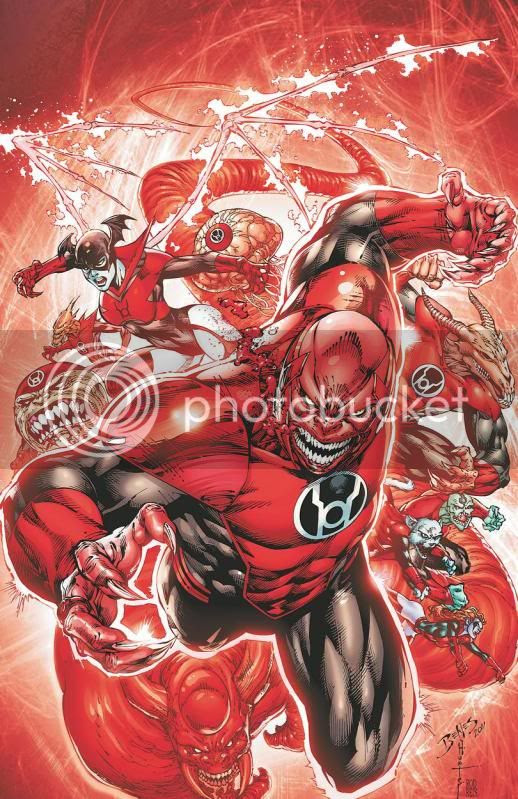 Red Lanterns #1
Atrocitus and his Red Lantern Corps has become one of the most popular groups of the expanded color spectrum ring-slingers; it was a matter of time before one of these groups got their own series, and the RLC is an obvious choice. Writer Peter Milligan usually does good work;  every so often he drops a duke with his scripts, but I can honestly say that I've enjoyed the vast majority of his work. Fortunately, he seems primed to do good stuff with this title. The fires of Atrocitus's rage seem to be ebbing, and rest of the RLC senses this. Atrocitus finds a new focus for his rage, but it may be too late, as dissension is already spreading throughout the RLC. The art by Ed Benes is, well, art by Ed Benes. If you're not a fan-- personally, I'm not-- there is nothing in this issue that will change your mind. Fortunately, most of the issue calls for Benes to draw weird aliens and monsters, which masks a lot of the deficiencies in his art. They come roaring back when actual humans appear, but that's only for a few pages.  There is nothing spectacularly good in this issue, but it lays a solid foundation for issue 2 to build on.
My score: 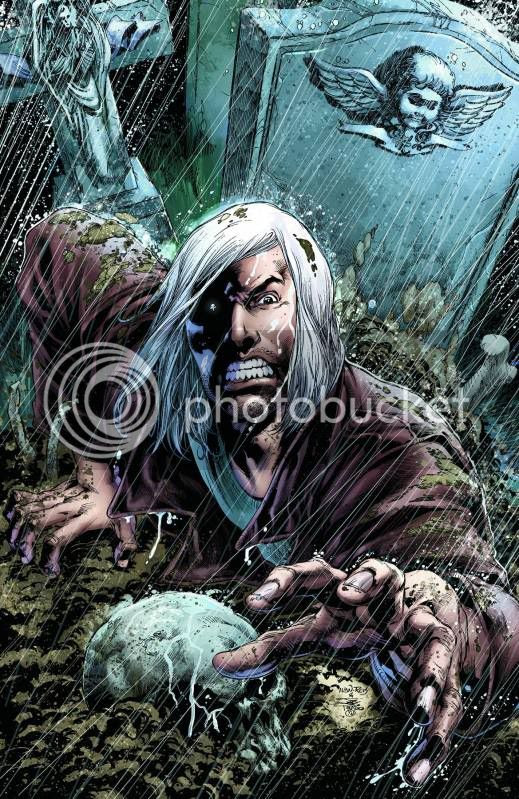 Resurrection Man #1
The beloved series from the ate '90s returns, written by its original wrting team of Dan Abnett and Andy Lanning(affectionately referred to as DnA). Mitch Shelley resurrects every time he dies, and returns with a different superpower each time. The forces of the afrerlife have finally taken notice, and supernatural agents are hunting him down, each hoping to claim his bright, shiny soul. It's a great premise with loads of possibilities. the angle that appears in this issue is on the creepy side, so just imagine what the demons are going to look like! Fernando Dagnino's art is nice and solid, with just the right touch of murkiness this book needs. This book doesn't hit the highs of last week's Swamp Thing and Animal Man, but it's pretty damn interesting.
My score: 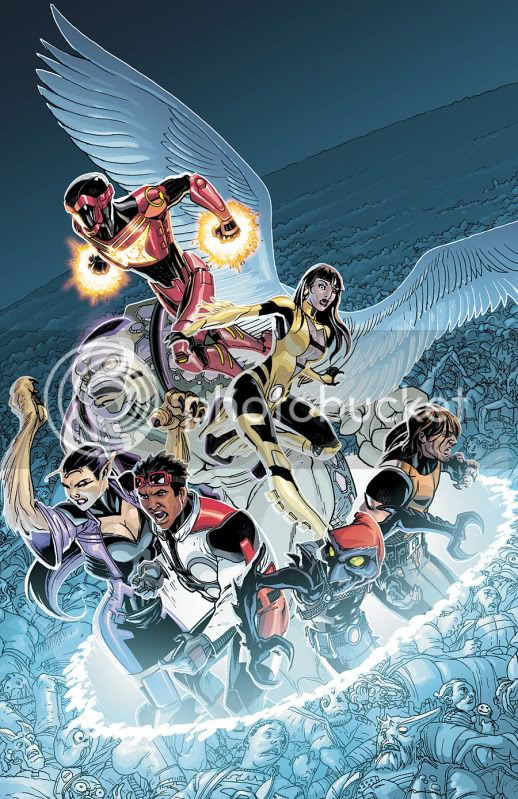 Legion Lost #1
Speaking as someone who is unfamiliar with this cast of characters, this issue can be slightly overwhelming. There's a cast of more than half a dozen, but writer Fabian Nicieza does make sure we get all their names and most of them get a moment to gives us a taste of their personality and powers. The time-stranded heroes quickly discover that their tech is not working properly in our time, and the pollutants in the atmosphere are having an adverse effect on some of them. They quickly capture the villain they were pursuing, and that's when the real trouble begins. Some unspecified pathogen has been released that threatens to erase the future, and it seems our heroes will be trying to contain it while they are stranded here. Pete Woods's art is very nice, as always. This comic is fast-paced and action-packed, and the cast seems to be a pretty good mix of power sets and personalities. The issue didn't "wow" me, but it was interesting enough that I'll be back next month.
My score: 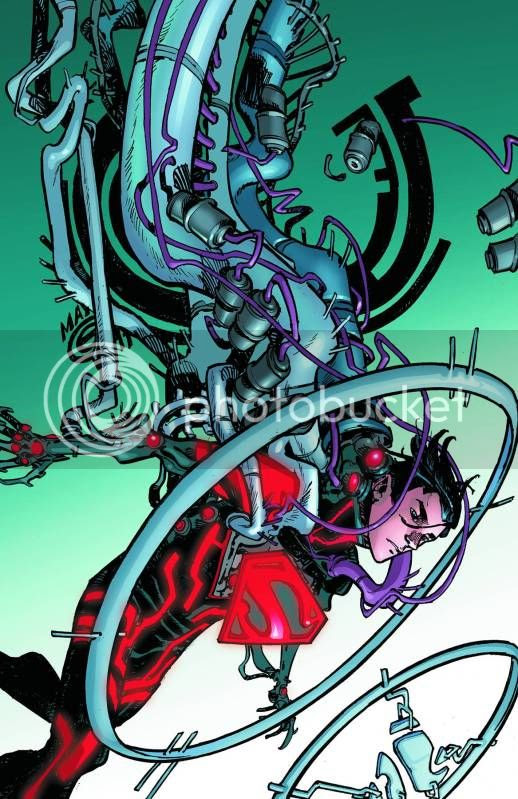 Superboy #1
This title has an uphill struggle ahead of it, as it replaces the Jeff Lemire-penned Superboy series that had quickly become a beloved fan-favorite. There's even a sly shout-out to that series in this issue, so the team is clearly aware that they'll be facing that comparison. Scott Lobdell does a pretty good job with this issue, giving us a character that is a bit closer to the original conception of the Conner Kent version of Superboy. the end of the issue dovetails nicely into the soon-to-be-released Teen Titans #1.  The art team of R. B. Silva and Rob Lean deliver work that is serviceable, and not much more than that. Still, it's not a bad-looking book; it just looks sort of... okay. This is definitely not in the upper echelon of DC relaunch books, but it's a decent debut for those of you who are curious and want to check it out.
My score:

That's it for today! Drop in tomorrow, when we'll be looking at Batwoman #1, Frankenstein: Agent of SHADE #1, Green Lantern #1, Suicide Sqaud #1, Grifter #1, and Mister Terrific #1!
Posted by Waylon Piercy at 6:07 PM