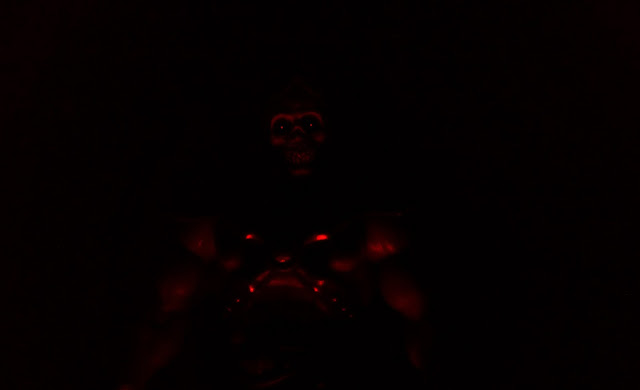 Surprising absolutely no one, this special Halloween day review is a celebration of all things Skeletor! Or more specifically, reviews of few different permutations of the character in figure form. Skeletor is probably my favorite character from anything, so naturally, I've amassed quite a few Skeletor figures over the years. Strangely enough, I never owned the original figure as a child. For whatever reason, he was rather tough to find in my town. We didn't have a lot of money growing up, so I only got new toys occasionally, which let to a few occasions where I would finally see him in a store, only to be informed that I couldn't get him. So it was that I had to keep coming up with excuses why Skeletor wasn't present in my MOTU adventures-- he was normally a disembodied voice, giving orders to his underlings and attacking with his sorcery from afar-- until the release of Battle Armor Skeletor in 1984. This relative rarity added to his mystique and coolness in my mind, and he was my top priority once I began rebuilding a vintage MOTU collection as a young adult around 2000. 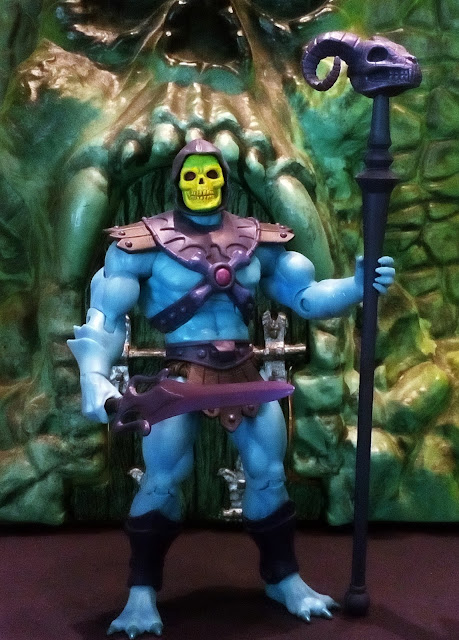 Obviously, there have been many different characterizations for the arch villain. The sarcastic, bumbling version seen in the Filmation cartoon is probably the best known, but I was familiar with him from the early minicomics before the cartoon began, so it was never my preferred version. The darker, more malevolent and dangerous Skeletor of the early comics informed my view of the character. This was the Skeletor who plagued Eternia, and occasionally the entire universe, in my MOTU adventures. He-Man and his allies suffered many setbacks, and their victories were hard-earned, and not always assured. Some prefer the sarcastic asshole Skeletor-- and that version is certainly not without its charm, since the Skeletor featured in my goofy comic strips is basically that persona cranked up to eleven-- and many find that their preferred version lies somewhere between the two extremes. Thankfully, whatever your preferred version of the archetypal supervillain may be, the MOTUC line has you covered. 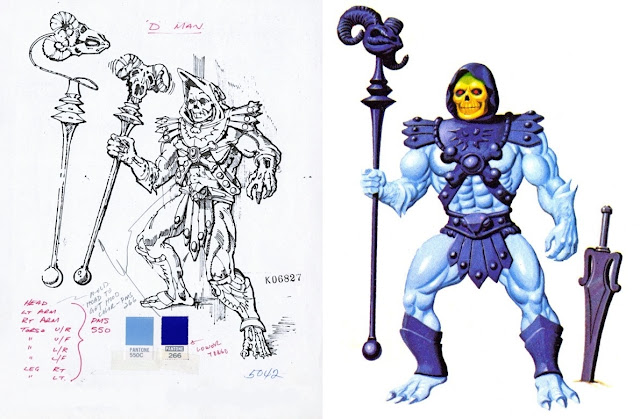 As the MOTUC line kicked off in 2008, we actually had to wait a bit for its villain to arrive. This was likely rooted in the line's original intent to be sold as two-packs, each pairing an A-list character with an antagonist. He-Man vs Beast Man was to be one such pack, so they were the first two figures sold, leaving Skeletor to debut afterward. While the Four Horsemen drew from the concept art for some figures in the line, for the earliest figures, the original 8-back cross-sell artwork was the defining design element. (See Skeletor's concept art by creator Mark Taylor above, courtesy of The Power and Honor Foundation.) As you can see, they matched the cross-sell art pretty much exactly. (I still want a figure based on that concept art, though!) With a few added paint details, the figure looks as if he stepped right out of the cross-sell ad. Note the shin guards and spiky gloved-looking forearms, which differ from the scaly sculpt of the original toy. Even the open gesturing left hand, which was much maligned by many collectors, was present in that art, and even as far back as the concept art. While this may not be the ideal version of Skeletor for everyone, it can hardly be criticized for faithfulness! In the absence of what I wanted most-- a super-articulated Skeletor figure based on the 2002 design-- this was a very nice consolation prize. This figure's head sculpt has a bit of a creepy clown-type vibe going for it, but it's pretty toned down compared to some of the more extreme renditions of Skeletor.
This motherfucker, on the other hand, looks like he eats babies for fun. 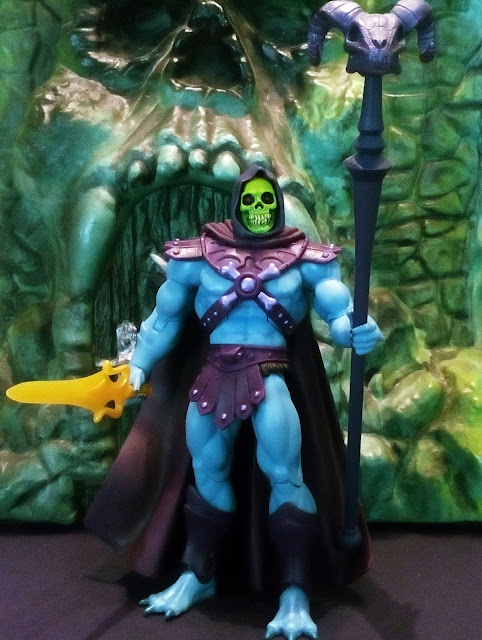 This, the default Skeletor in my MOTU display, is actually made from three different figures. From the neck down, it's the second version of Skeletor, which was available in one of the Toys R Us exclusive MOTU vs. DC Universe two-packs. It's the same as the basic Skeletor figure, with a few differences. The skull was completely yellow, the armor is a lighter shade of purple and has some different paint apps, and the left hand has been resculpted so it can hold accessories more easily. This figure was taken as a Filmation Skeletor by many collectors in the years before an actual Filmation figure was produced. The cape is from Keldor, who we'll get to in a minute. The head was a pack-in with Demo Man, an awesome figure based on early concept art by MOTU originator Mark Taylor. It's based on the amazing work of master artist Alfredo Alcala, who illustrated the four original minicomics that shipped with figures in the MOTU line's first year, as well as many of the minicomics from the next couple of series. 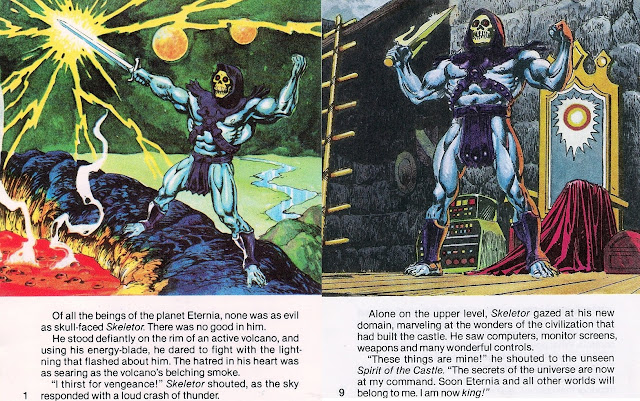 Alcala produced amazing work, and his renditions of the early MOTU characters and their world remain the definitive ones for many. It's an incredible sculpt, one that many of us lovers of the early comics had wanted for years, but had barely dared hope would actually be produced. 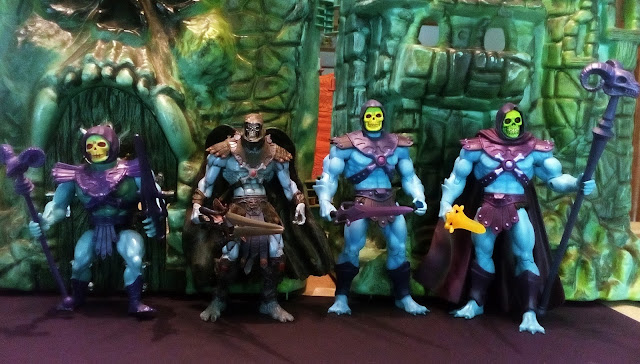 First hinted at in the minicomic The Search for Keldor, which was released in the vintage line's final year, Keldor is King Randor's half-brother. This was obliquely hinted at in the minicomic, but it wasn't until the 2002 animated series that the tale of Keldor was fleshed out a bit. Though he was the rightful heir to the throne, the racism of the Eternian people against the blue-skinned Gar race led to him being passed over. Understandably bitter, Keldor began treading the path that would lead to his transformation into the unholy Skeletor. The figure is mostly composed of the same parts we've already seen twice with previous Skeletor figures, though he also borrows from a few others, mostly He-Man and Tri-Klops, to complete his pre-Lord of Destruction look. The head sculpt is excellent, making this figure a great representation of the charismatic rogue who only sought to claim the throne that was his by right. He looks even cooler with his cape, which I was hesitant to remove, but Alacala Skeletor demanded it! (And yeah, I know he didn't wear a cape in the comics. I don't care. He looks even more badass wearing it!) The one major issue with this figure is that his armor should have been a new sculpt, as he did not wear armor featuring the bone motif during his Keldor days. 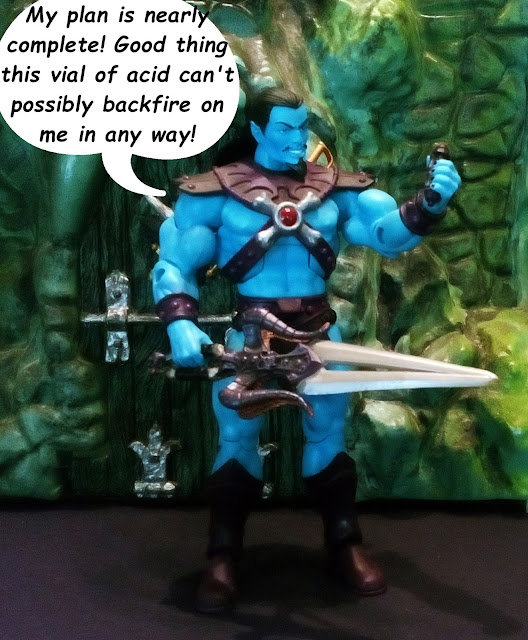 Articulation on all three figures is standard for the line. Keldor's righteous mane does restrict his head movement, however. His right ankle is also very loose. Paint apps are pretty sparse, but well applied where they're needed. One oddity is the Alcala head sculpt; for whatever reason, the decision was made to paint the shadowed parts, such as around the eye sockets, purple instead of black. I repainted those areas, so this odd color choice is not visible in these photos. The original Skeletor included his purple power sword, a half version of that sword, as a nod to the original toys, and his trademark Havoc Staff. The comic Skeletor only included a cool translucent yellow version of the power sword, representing how it looked in the included comic. Keldor included the very cool acid vial that wound up melting his face off, and, controversially, two of the purple half swords. This was a huge sticking point, as Keldor (and later Skeletor) wielded a pair of very awesome dual swords. (These were originally redesigned power sword halves, as the Four Horsemen originally intended the 2002 MOTU toyline to continue the story of the original, with Skeletor possessing both halves of the sword, and He-Man having to use the tech sword created by Man-at-Arms to channel the power of Grayskull. When Mattel decided to make it a reboot instead, the designs remained.) Those in charge of the line insisted that these were the MOTUC version of those swords, which, frankly, was utter bullshit. Fan outcry forced Mattel to eventually cave and release a proper version of the swords in a later weapons pack, but since I'm not prone to shelling out $20 to get an accessory that should have been included with a figure to begin with, my Keldor is holding a pair of the swords from the 2002 Skeletor figure. A mid-transformation "melting face" head, akin to the one the 2003 SDCC exclusive was packaged with, would have been a cool inclusion, but sadly, one was never produced for the line. 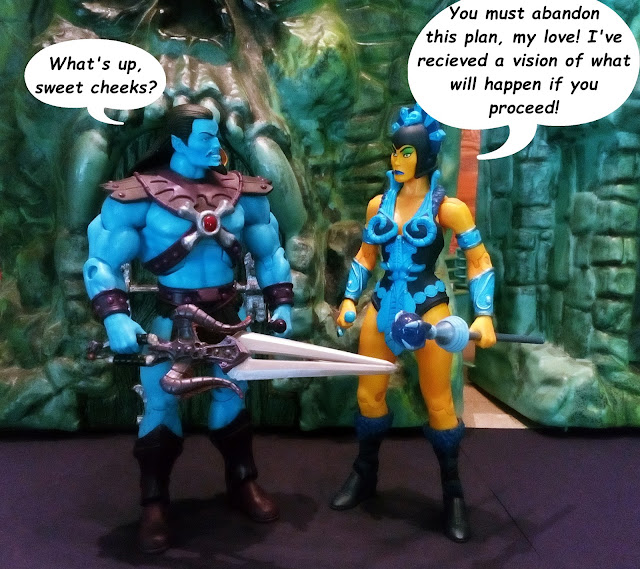 As the main villain of MOTU, a Skeletor figure of some sort is absolutely essential to any MOTU collection. Whatever your preferred version is, you can put together a pretty damn close representation of it using the available parts. (Unless you like the movie version, of course!) Most will cost quite a bit, sadly. Nearly every version of the character carries a high price on the secondary market, with the exception of the Intergalactic version, which was based on his appearance in the divisive New Adventures of He-Man revival from the early '90s. For those who want to find a Skeletor without selling any vital organs, your best bet may be to pick up a Keldor and pair him with the head of your choice. Many loose heads are available on the secondary market, including some custom-cast ones. There's bound to be something that appeals to you. So, what is your preferred version of the character? What variation of the figure stands front and center on your shelf? Feel free to sound off in the comments, and scroll down for more photos, including a couple of pieces of awesome vintage Skeletor-centric art by Esteban Maroto! 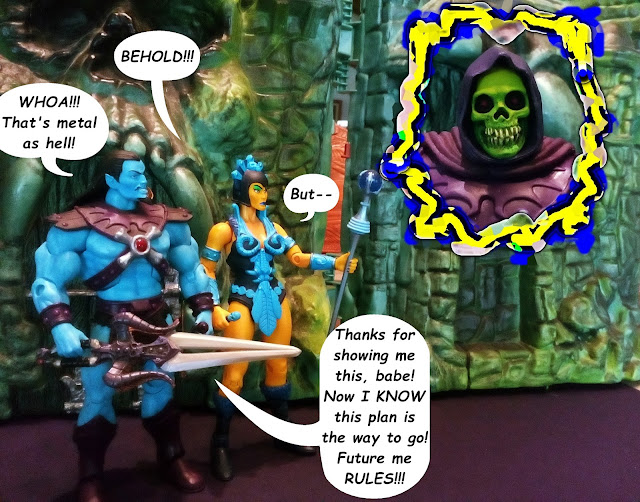 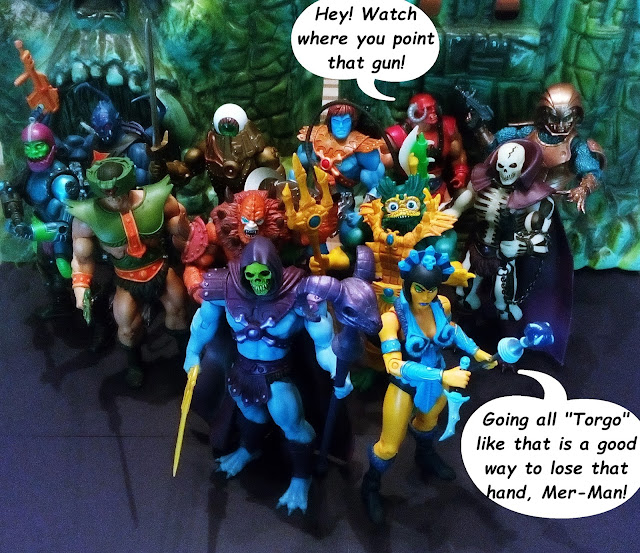 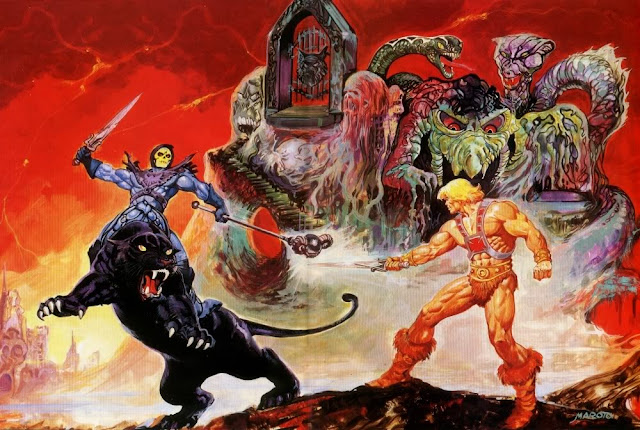 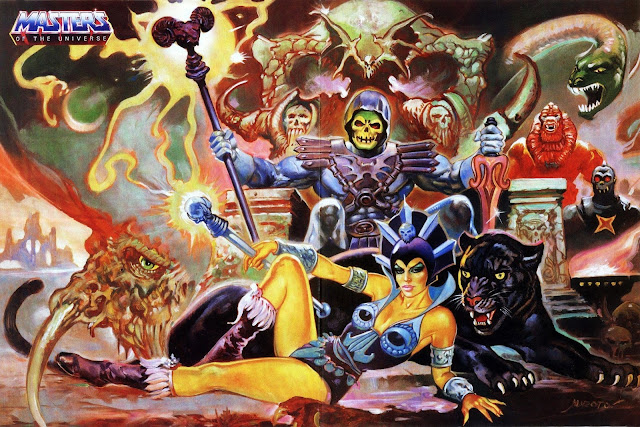