I know, I know; I promised last time that I'd be reviewing monster-type figures each week during October, to sort of stick with the Halloween theme, since real life crap prevents me from doing the daily Halloween posts I normally do. Alas, that same real life crap prevented me from even getting a review together last week, so I'm behind again. Have no worries, as this is one of several reviews I'm writing (and photographing) back to back to ensure that you'll have five monster-ish figure reviews by the end of this month, culminating on Halloween itself! So, this week, I'll feature a review in the usual Tuesday slot, along with an additional one tomorrow, and another one Thursday! 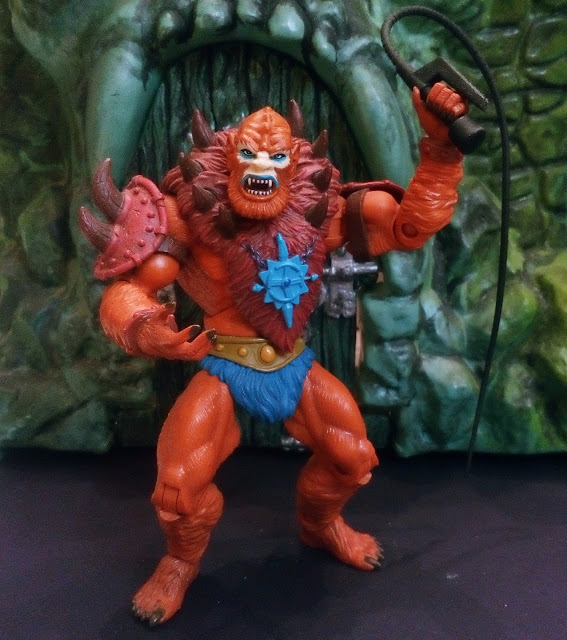 With that bit of housekeeping out of the way, let's dive right into today's review. With most of the MOTUC stuff I'm buying these days not fitting into the month's theme, I'll be drawing from my older figures for a few of them. Today, it's Beast Man, one of the original releases in the MOTUC line! Way back in 2008, King Grayskull was the line's inaugural release at San Diego Comic-Con, followed by He-Man and Beast Man that December. I was all-in for the line from day one, and Beast Man was an early example of exactly how great this collection of figures could be. 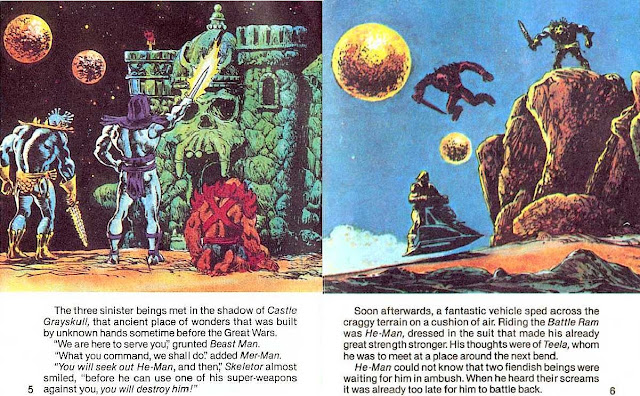 The quintessential henchmen, Beast Man was an ever-present character in all forms of MOTU media, from the comics, to the cartoons, storybooks, and live-action movie. The hirsute henchman has always been at his master's side. Like everyone on the Filmation cartoon, Beast Man seemed to have suffered some severe brain injury, as he was utterly incompetent, and he didn't fare much better in other portrayals. To my childhood self, however, he possessed a feral cunning that, coupled with his raw power, made him a terrifying force that only his master could hold in check. In the early minicomics, Beast Man was a formidable foe, even capable of taking out He-Man on occasion. (As seen above! It was pretty cool to see He-Man just get his ass kicked by henchmen from time to time. The completely invincible demi-god he became once the Filmation cartoon made the scene was far less interesting to me.) I was a big fan of the Four Horsemen's redesign of the character from the 2002 line, and while this figure draws mostly from the vintage figure and the concept art of the character, there is a bit of the 2002 version present, as well. 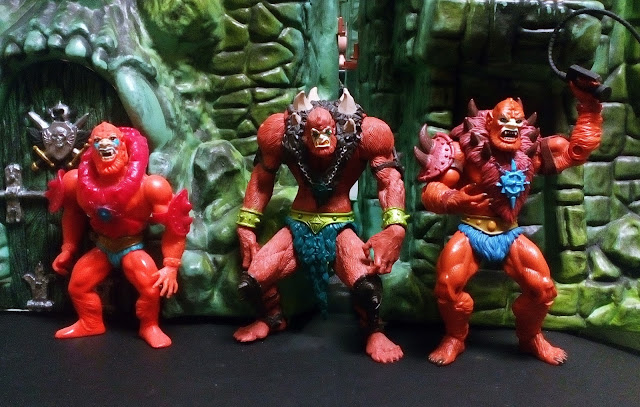 Beast Man was the debut of the furry body that we would see many times throughout the MOTUC line, and it allowed the 4H to really cut loose with the detail. The fur is exceptionally detailed, but not to the point that it doesn't fit in aesthetically with the rest of the line. The left hand features the spiked weapon that was present on the vintage figure, a detail that is often overlooked. His left hand is sculpted to hold accessories, while the right is in an open-handed gesture. The head sculpt is excellent, with similar level of detail, and an expression of pure bestial rage that tells you everything you really need to know about the character. The furry chest armor continues the detailed sculpting, and perfectly updates the vintage design. It's shaped in such a way that it lends the figure quite a bit of bulk. As the furry body is rather lean, this is most welcome, and the added bulk suits the character very well. The bicep armor has a nice worn metallic texture, showing scars of many past battles. It's worth noting that there is a large mold line on the furry armor, but it is on the back of it, so while it's very obvious, it won't be visible unless you plan to display the figure staring at the wall. 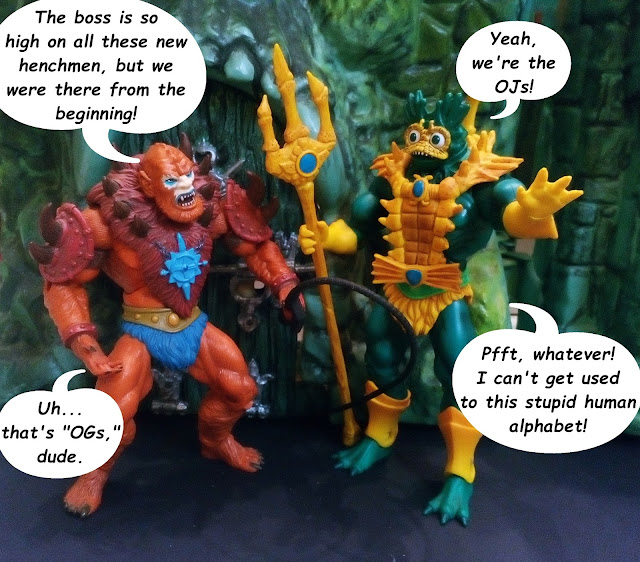 Articulation is standard for the line, with no sign of the loose ankles or limited range of motion in the ball-jointed head that would plague some future figures. The paint apps are very good, for the most part; most lines are very clean, particularly on the facial details, which is impressive considering how many there are. Some slop with the facial coloring would result in Beast Man looking more like a prison bitch than a beast lord, so this is a pretty important area to get right. There's a very nice paint wash on the armor that really makes the details pop. The only gripe I have, and it's a minor one, is the plain blue on the medallion. It's such a large area that it really needs some additional paint apps, ore even just a good paint wash, to make it fit in with the otherwise excellent work. As it is, it looks a bit out of place among all the detailed paint apps. Beast Man's lone accessory, apart from his armor, is his whip. It emulates the basic design of the vintage weapon, but since it is made specifically for the figure, it's scaled appropriately, and can actually be held properly. (The vintage figure's whip was re-used from Mattel's larger-scaled Big Jim line, so the figure could only hold it by the hand guard, as the actual handle was far too large.) The whip is very soft, rubbery plastic, so it drapes pretty well and looks good with most poses. 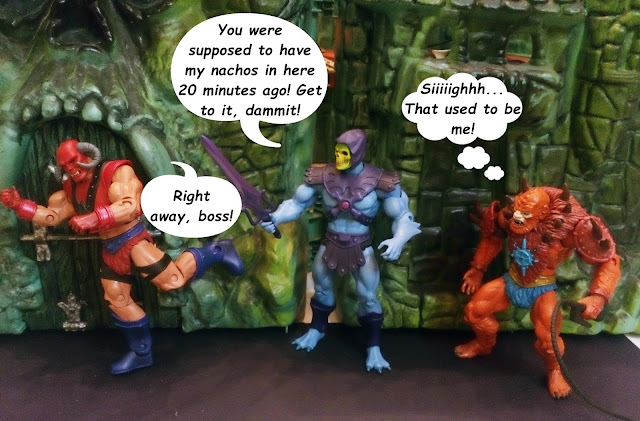 As Skeletor's chief henchman/whipping boy, Beast Man is one of the handful of figures that is absolutely essential for any MOTU collection, so it's a good thing that his figure was executed so well. The MOTUC line has had many, many high points over the years, and Beast Man remains one of the best figures in the entire line. Even after several reissues, he remains very pricey on the secondary market, which is a shame for latecomers to the MOTUC line, as he really is a must-have figure. That's all for today, but scroll down for more photos, and be sure to creep on back tomorrow for this week's first bonus review! 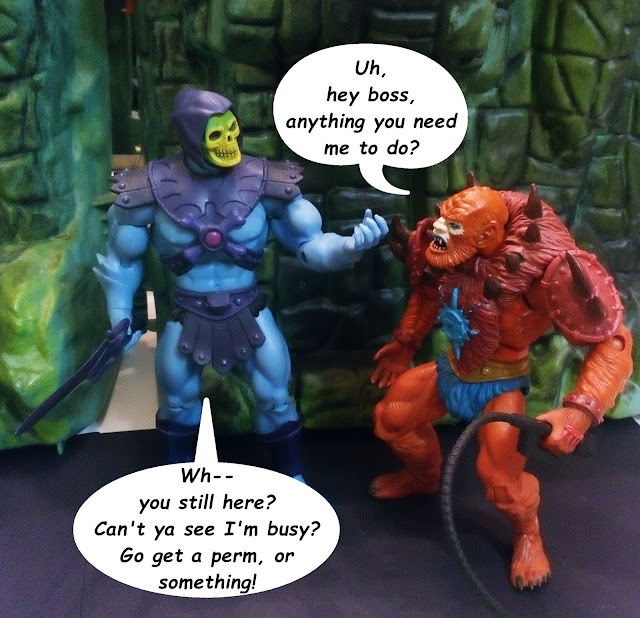 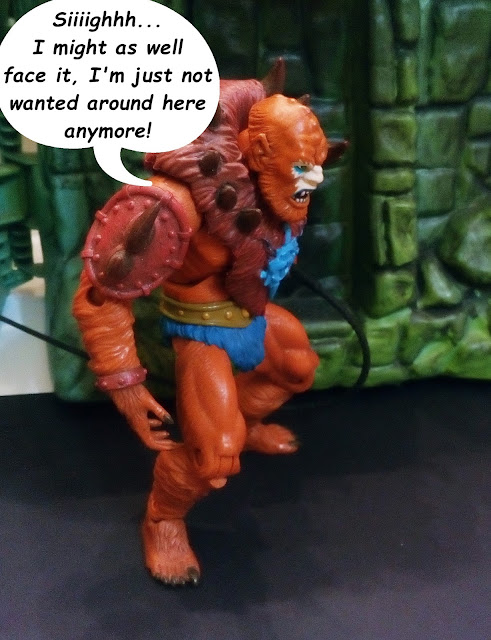 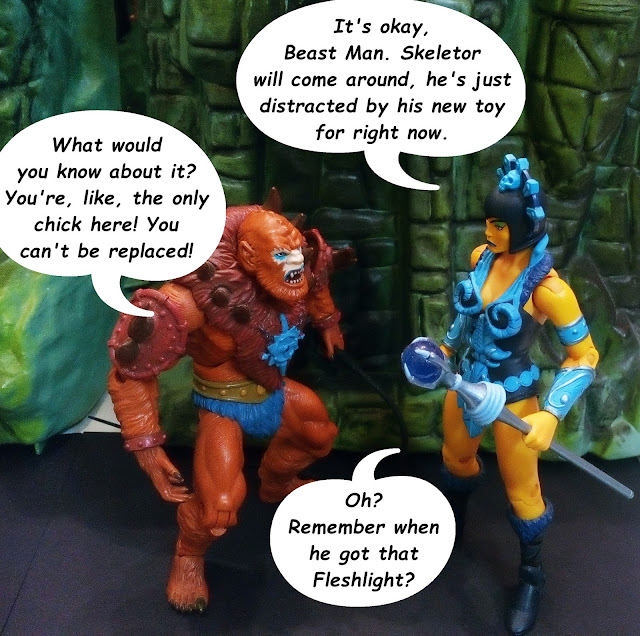 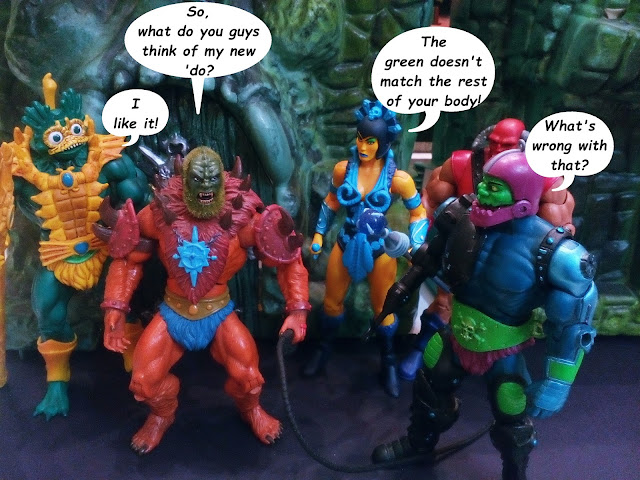