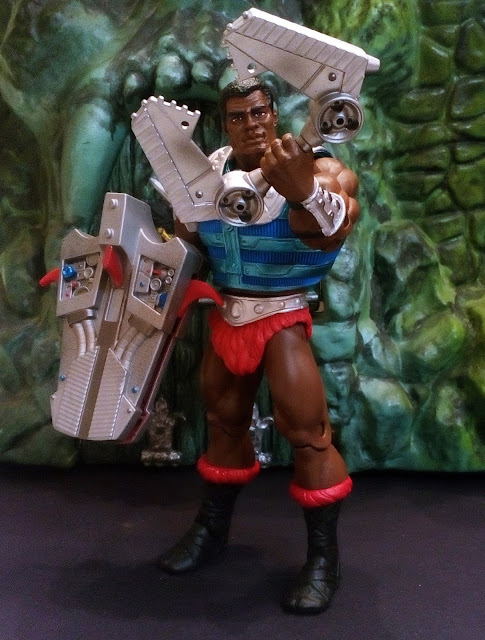 The final wave of the vintage MOTU line was pretty interesting. About half of the figures required a lot of new tooling, while the rest were almost nothing but reused parts, with a new head and accessory or two. Clamp Champ, the master of capture, fell into the latter camp. My eight year-old self didn't care, though. I instantly thought Clamp Champ was awesome. I already enjoyed movies like Shaft and Foxy Brown, and I had noticed that there weren't any black characters in my MOTU collection. Being a child, it didn't occur to me why that might be; I chalked it up to the same reason why they hadn't made figures of major characters like the Sorceress and King Randor, who were also finally released in that final wave. So when I saw Clamp Champ for the first time, I instantly gravitated toward him, and simply had to own the figure. I had pretty rotten luck finding any of the figures from that final wave-- the figures had a relatively low production run, and distribution was not as widespread as in earlier years-- and Clamp Champ was the only one I ever saw. I managed to get him for about a dollar on clearance at the local K&B. (Remember those?) 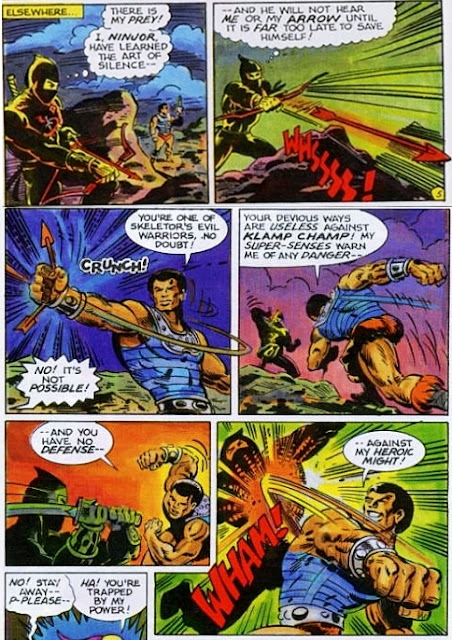 If I hadn't already thought the Champ was cool, the included minicomic, The Search for Keldor, would have ensured that I did. Whereas characters often just showed up in the minicomics and did little of importance, this dude straight up plucks an arrow right out of the air, and then kicks the shit out of the super ninja that shot it at him. Artist Bruce Timm also drew Clamp Champ with a little 'fro, further strengthening the connection to Shaft in my adolescent mind. And that pretty much set the template for the Champ's characterization in my MOTU adventures: He was a smart, tough-as-nails ass-kicker who other characters would turn to when they had a problem, and the ladies couldn't resist him. His reuse of Fisto's armor only made him cooler, as Fisto was one of my favorite characters. This meant, in my mind, that Fisto and the Champ were brothers, and they would frequently team up for various adventures. I tended to assign vehicles to specific figures; Fisto had Stridor, He-Man had Battle Cat, Man-at-Arms had the Battle Ram, Mekaneck had the Road Ripper, and so forth. Clamp Champ had to have one of his own, and he got one of my very favorites: the Bashasaurus. Part of my reasoning was that, since he and Fisto were brothers who teamed up a lot, they should both have animal-themed rides. It made sense at the time! 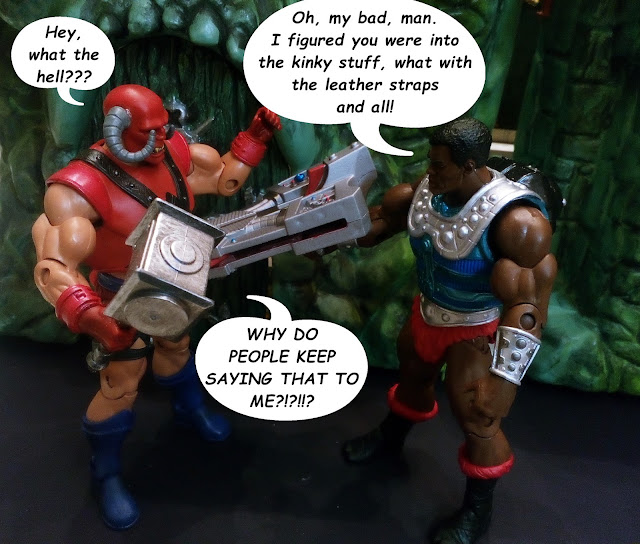 Naturally, I was very disappointed that Clamp Champ never received a figure in the 2002 MOTU line, which ended after only 18 months or so due to Mattel's bungling. (Yeah, I might still be just a little salty about that!) I did customize a figure of him, at least, and he received a staction in the Four Horsemen's mini statue line. The MOTUC figure is firmly based on the vintage figure, though it does incorporate a bit of the 2002 4H design. From the neck down, Clamp Champ's sculpt is exactly the same as the standard He-Man figure. His head is the only new tooling apart from armor and accessories, so it needed to be a home run. Thankfully, it is. This is one of the best head sculpts I've ever seen on a 4H figure, and that is high praise indeed. (When it comes to male figures, anyway...) The face is very detailed, and is very expressive. Far too many action figures have a blank, neutral expression, and that even plagues a handful of MOTUC figures. The Champ doesn't suffer from that, and the expression seems to change depending on the angle from which you view it. It's always awesome when the sculptors manage to pull that off. The armor looks similar to Fisto's, but it's actually a new sculpt. There are tech details that were not present on Fisto's armor,  and a backpack that is also new. It would be nice if the backpack was removable, but that's not a huge deal. 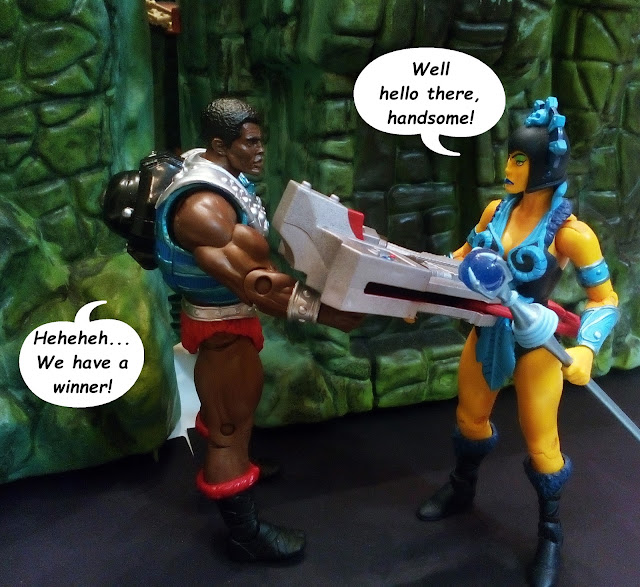 Articulation is standard for the line, with ball joints at the head, shoulders, and hips, hinge joints at the elbows, knees, ankles, and torso,  and cuts at the waist, wrists, thighs, and boot tops. The ab hinge and ball-jointed head work quite a bit better than on many MOTUC figures due to the figure's design. The armor has a cutaway on the back to avoid interfering with the articulation. Thankfully, this doesn't look too weird. Paint apps are mostly neat, particularly on the face. The armor has some nice metallic highlights on the metal bands. There is a bit of slop around the belt, and it would be nice to have the boot straps painted a different color, or given a gloss sheen or something, as we've seen with other figures. Accessories include the clamp from which the Champ gets his nickname, and a smaller capture device that is based on one from the 2002 design. Both are nicely detailed, and the large clamp has some paint detailing here and there. The device doesn't actually work as the vintage one did, and the pincers must be posed manually. It's worth noting that the pincers don't completely retract into the clamp as they did with the vintage version. The vintage clamp also included an indentation for the thumb to fit into when the figure was holding it; that is not present here. There doesn't appear to be any way to stow the weapons on the backpack, which is disappointing. 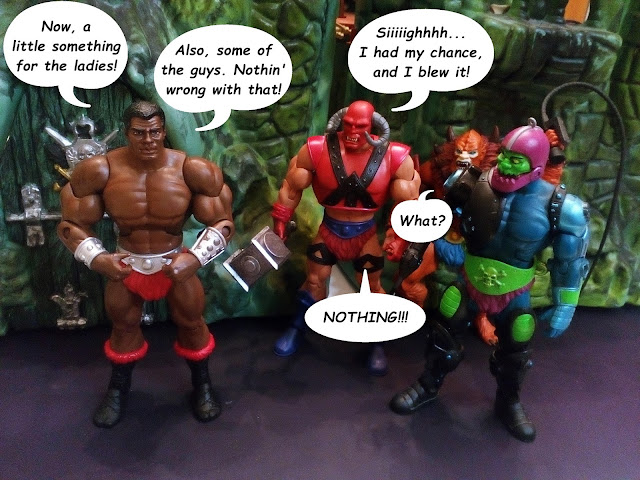 Considering that there is still overstock of this figure available on Mattel's Ebay store, it's safe to say that Clamp Champ is not one of the more popular figures in the MOTUC line. This only proves the saying that every character is someone's favorite! I love the character and the figure, and I'm very pleased with the work the 4H and Mattel did with him. He's not as flashy or as attention-grabbing as some of the other figures in the MOTUC line, but the Champ is a solidly-executed figure that will round out your MOTU heroes very nicely.
Posted by Waylon Piercy at 11:30 AM