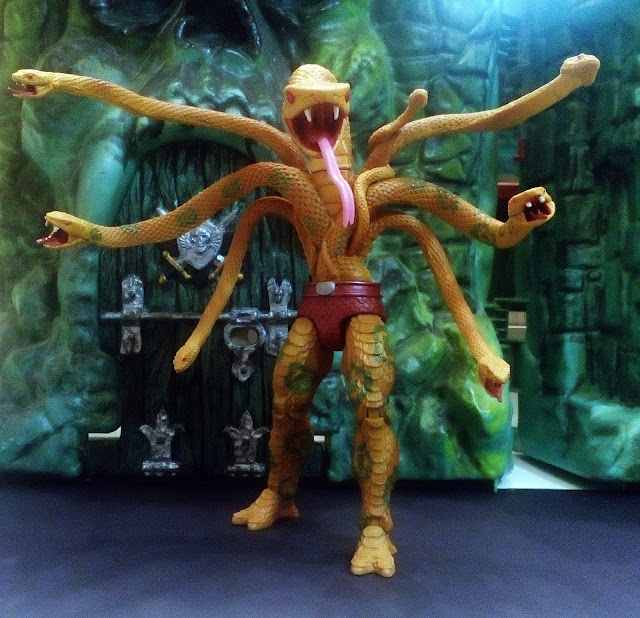 It's October, which means it's my favorite time of the year: the Halloween season! (It begins for me in the second half of August, but everyone else is on board by now!) Since I sadly don't have the time to do the daily Halloween-themed posts I've done in years past, each figure review this month will focus on monster-type figures. (Even though real life crap made me miss last week, d'oh! There will be a bonus review sometime this month to make up for that.) Anyway, off we go with King Hiss! 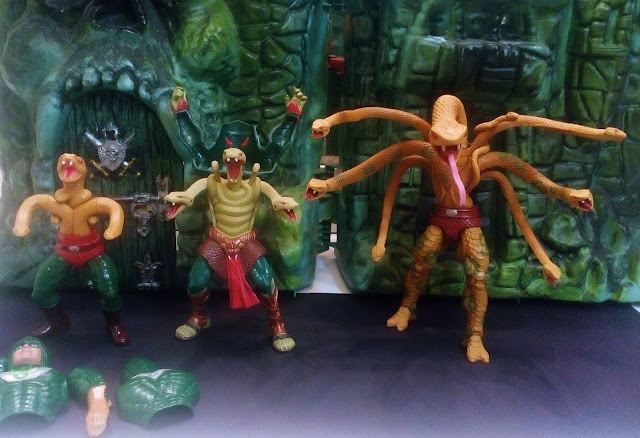 As one of the main faction leaders in the MOTU universe, it was inevitable that King Hiss (or Hssss, as Mattel spells it these days) would receive a couple of refreshes in the MOTUC line. However, unlike Skeletor, He-Man, and Hordak, Hiss only had one figure produced in the vintage line. So, for awhile, there was much speculation about exactly what new versions of the character in figure form would entail. As it turned out, this version of the character was produced because the original MOTUC Hiss was rather sub-par. 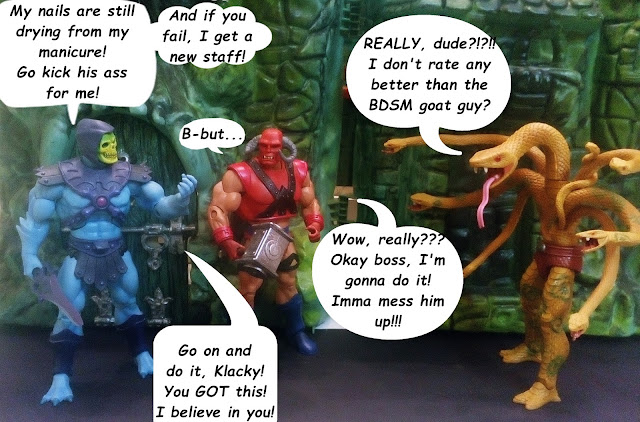 Oh, the original MOTUC King Hiss was sculpted well, of course. With the Four Horsemen at the helm, that was always a given. His human "disguise" was a perfectly executed update of the original. However, despite his snake form no longer having to fit inside the humanoid shell, as the vintage version did, the snake form was still based on how the vintage version looked. It had the same stubby proportions, and an overall unimpressive look. Certainly not the nightmarish creature King Hiss was supposed to be! Enter Serpentine King Hiss. Originally just a new torso that would attach to the original King Hiss waist, it wound up becoming an entire new figure. With the 4H cutting loose on an all-new, unleashed snake form, and some clever reuse of the legs from Rattlor, we got a totally badass update to the King of the Snake Men. 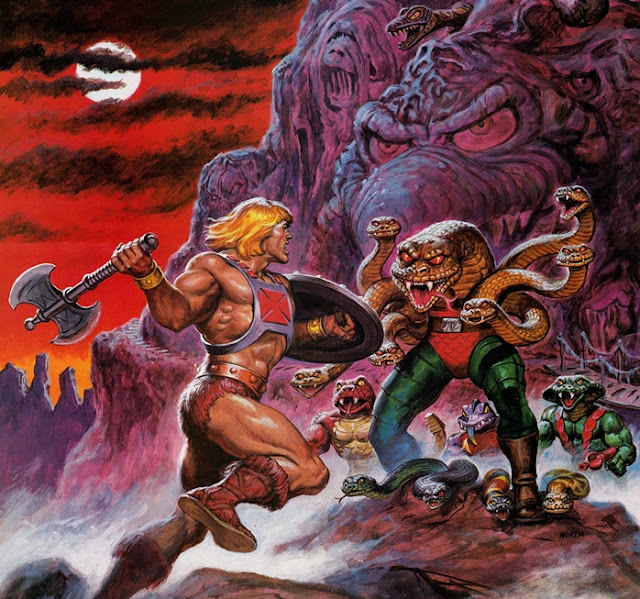 This new sculpt is evocative of Earl Norem's rendition of Hiss, as seen in this poster from the MOTU magazine. The 4H went all out with this sculpt, packing in the detail. Each scale is lovingly sculpted, and even the interior of each serpent's mouth is detailed. The serpent heads have a couple of different poses and sizes, giving them some sense of individuality. One small issue is that the lower jaw on the main snake head is a separate piece, so there is a very obvious seam. It blends in well on the sides of the head, but it's impossible to miss from the front. It hurts the look of the figure a bit, but given the realities of production, I'm not really sure how else this could have been done. It's not a huge problem, but it is something worth noting. The legs, as mentioned, were  previously seen with Rattlor and one of the snake men army builders. This breaks with the norm, as the disguised humanoid legs were always used previously, but I'm very glad the 4H broke with tradition here. Not only does it further differentiate this from the previous MOTUC Hiss, it simply makes more sense. It always looked odd to have those normal green human legs remain the same, while the top was an eruption of serpents. This fully transformed version of Hiss looks very intimidating indeed! 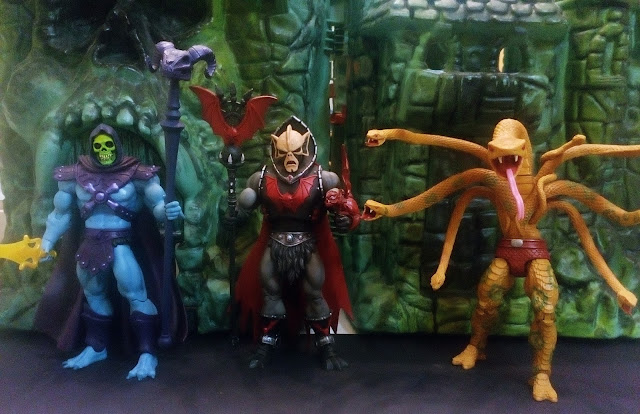 Articulation is the MOTUC standard from the waist down. The main serpent head has a cut neck, and the six long snake limbs are bendy. Some collectors seem to really dislike bendy limbs, and I don't exactly love them myself, but it really seems to be the best option here. The one big drawback here is that the jaw on the main head should be articulated. It's already a separate piece, so it should have been connected on a hinge, rather than simply glued into place. The tongue could be removable, so we'd have more options for displaying our snaked-out King Hiss. As far as accessories go, Hiss is pretty loaded. He has a very cool mid-transformation head, designed to work with the original MOTUC Hiss figure, but it will snap right on to most figures in the line if you so desire. He also has an arsenal of weapons, all previously seen with the snake men army builder two-pack. He has a spear, a sword, a shield, and a particularly nasty-looking mace. He can't actually hold any of them-- not in any sort of convincing way, at least-- but these can be used to outfit other figures in your collection. There's a general snake motif on all of them, but it's subtle enough on all but the shield that these weapons will work with figures from any faction. 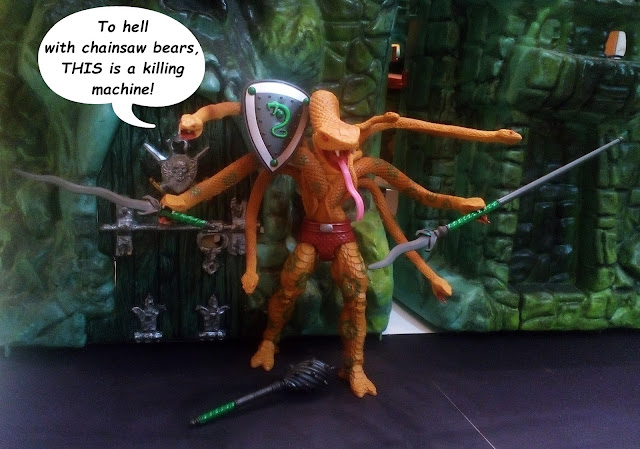 While there was much rancor over Serpentine King Hiss becoming a full figure, rather than simply the torso as a subscriber bonus, as originally promised, I do feel this made for a much better figure in the end. (There is definitely some validity in the dissatisfaction over Mattel breaking yet another promise to its customers, though.) Making it a full figure enables it to stand on its own, rather than limiting its usefulness to those who had already bought the original figure years earlier. It's a shame that it took two tries for King Hiss to be done properly, but I can't hold that against this figure. It's simply awesome, and as one of the main faction leaders, this is a must-have for MOTUC collectors. 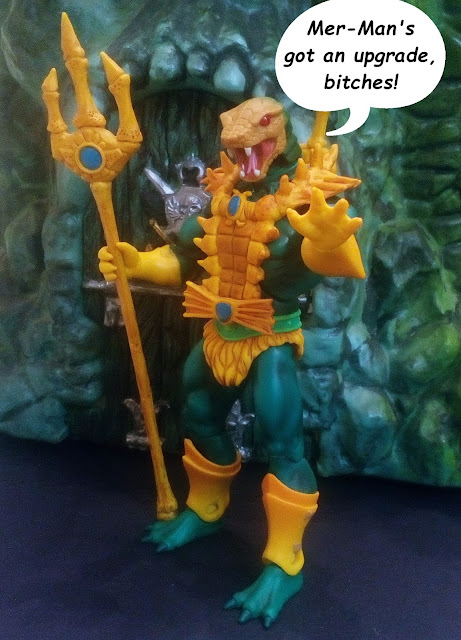 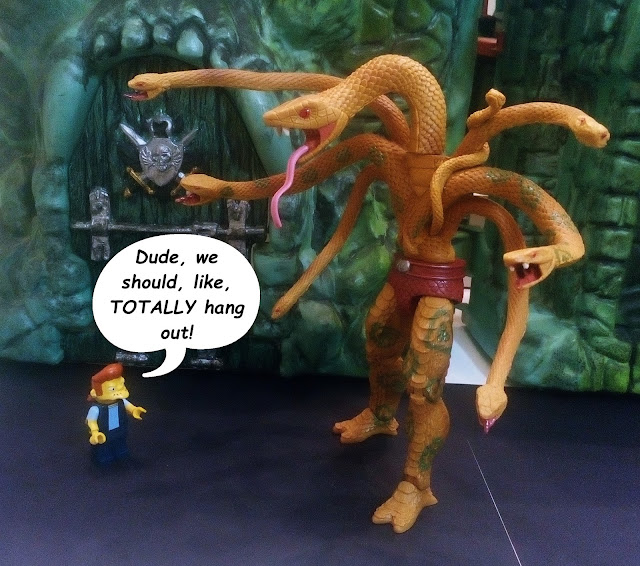