As much nostalgic goodwill as there is for MOTU, The New Adventures of He-Man, 1990's attempt to revive the property, is... let's be generous and say somewhat less well-remembered. The reasons for this could be debated endlessly; personally, I didn't care for it much when I was a kid because it jettisoned virtually everything that made MOTU what it was, transposing Skeletor and He-Man into a futuristic sci-fi setting that was infinitely less interesting to me. Still, I would have been interested in adding the toys, some of which had some very cool designs, to my MOTU collection, but even that didn't work for me because the toys themselves were so different aesthetically. Instead of the thickly-muscled beasts and heroes who looked like the most powerful beings in the universe, the NA figures were scrawny and unimpressive in comparison. Combine that with the difficulty I had finding any of the toys in my area, and I quickly stopped caring, and just continued to wish for more MOTU figures to be made someday. 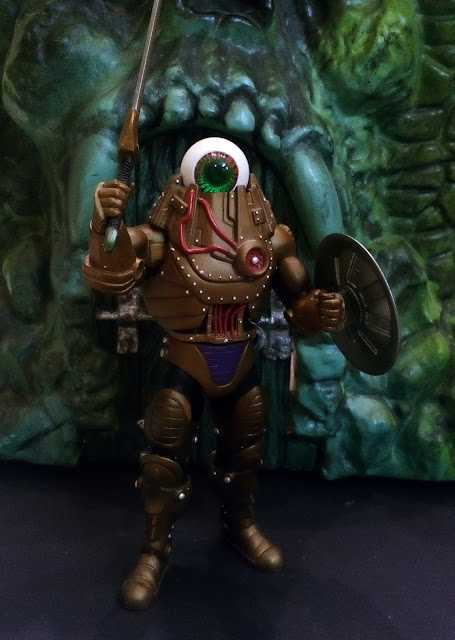 When it was made clear that NA characters would be getting figures in the MOTUC line, fan reaction was mixed, to say the least. For my part, I had nothing against the NA characters, it was just the style of the toys I didn't like back in the day. With them rendered in the MOTUC style, I was all for including those characters! More cool figures is a good thing, right? (Quite a few of the MOTUC collectors don't think so, but that's an entirely separate rant, so let's just stick a pin in it for now.) As the first representative from NA in the MOTUC line, Optikk carried the burden of legitimizing the NA characters in the eyes of many. Did he succeed? Read on to find out! 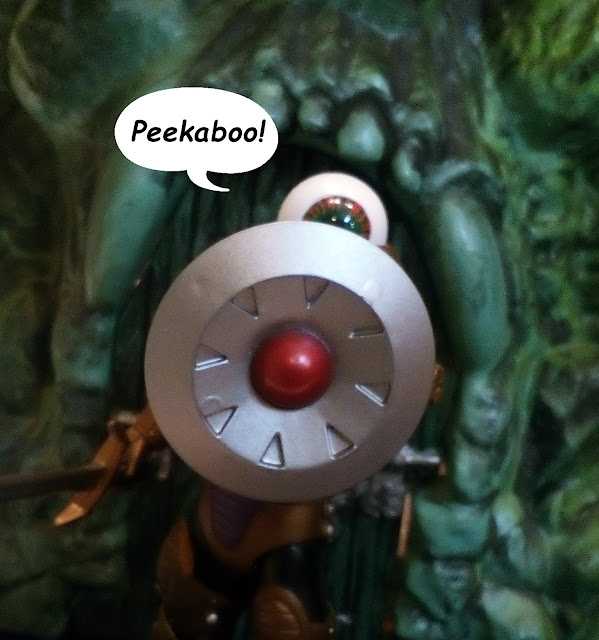 As per usual, the sculpting is excellent. Optikk makes use of parts previously seen on Trap Jaw, with a torso overlay to personalize it and house the "head." The overlay is loaded with details, with lots of rivets and wires running all over it. It's pretty crazy how close they were able to get to the original figure's design using parts from a figure that didn't exist in the NA line. The "heads" are a letdown in the sculpting department, unfortunately. This was a golden opportunity for the Four Horsemen to go crazy with the sculpting, as the giant eyeballs could have had some cybernetic veins and wires running over them. Instead, they're completely plain apart from the plastic iris. The plastic irises are very well done, but it's a damn shame that the rest is just a plain expanse of bland whiteness. 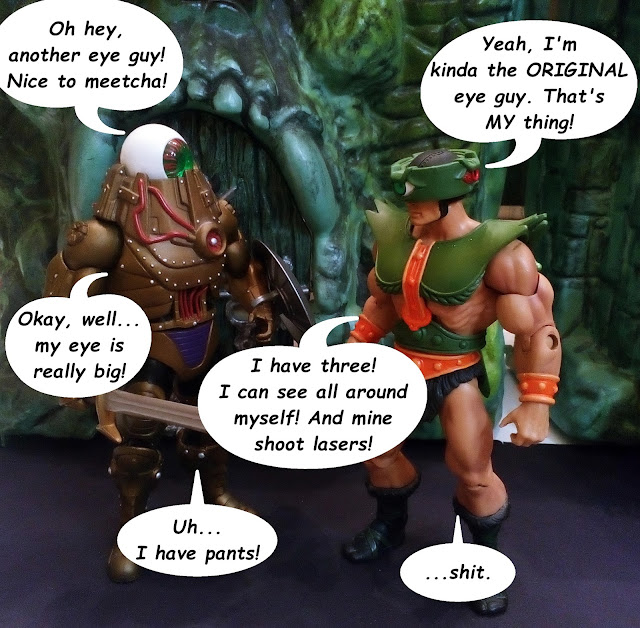 Articulation is standard for the line, though the abdominal hinge is limited a bit due to the torso overlay. The "head" is a bit tougher to pose than usual due to the same overlay, but it seems to have about the same range of motion. You just have to work it a bit to get it where you want it. Paint apps are mostly clean, with lots of detail on the wiring and rivets. The gold and black with red and purple accents is a very eye-catching color scheme, and the figure is well-served by it. Accessories include a laser gun, shield, and the previously mentioned extra "head." Apparently this is to appease fans of both the NA toyline and cartoon, as the giant eyeball sported a different colored iris in each. This also opens up the opportunity to have a pair of Optikks, each with a different eyeball, if one is so inclinced. (I have him armed with a sword that I think fits well with the figure's look in some of the photos, but it is not included with the figure. Plus, I just think it's funny to arm a guy with a giant eyeball head with a large pointy weapon!) 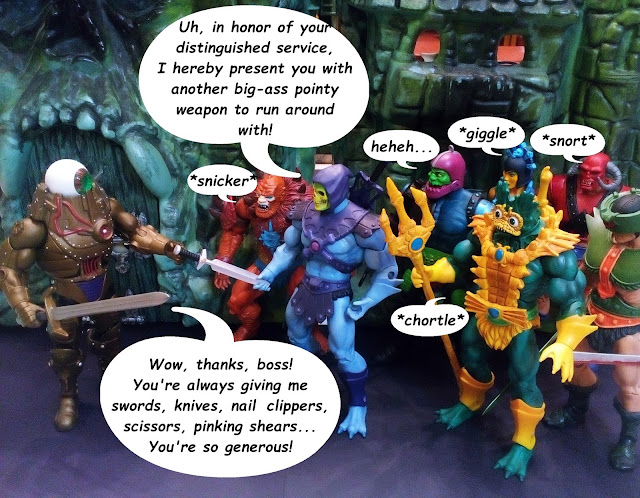 Whether or not you like the NA storyline, Optikk makes a fine addition to Skeletor's army. With a group that includes all manner of cyborgs, monsters, and animal-human hybrids, Optikk fits right in. I can see him serving perfectly as a lookout for Snake Mountain, standing atop one of its peaks. (Assuming a MOTUC Snake Mountain ever gets made!) He's definitely not a must-have, but as with Goat Man, if you like the oddballs as I do, he'll make a fine addition to your collection. That's it for today, but creep on back Tuesday for the Halloween figure review! (You can probably guess what figure it is if you know anything about me at all!)
Posted by Waylon Piercy at 11:30 AM