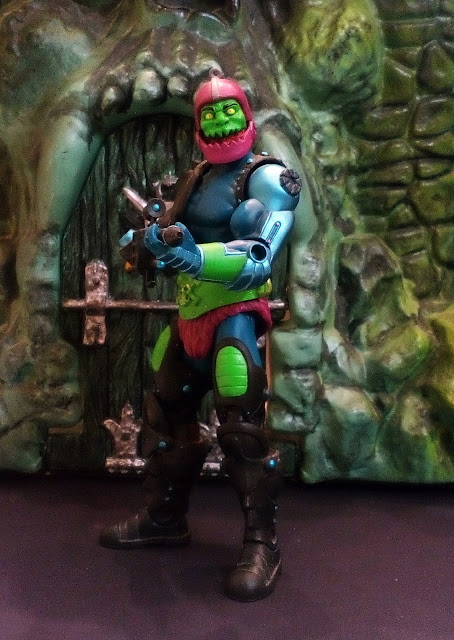 Trap Jaw is one of the finest examples of the versatility of the MOTU universe: damn near anything can fit right into it. A space pirate mercenary cyborg Frankenstein monster? Sure, no problem! Back in the day, Trap Jaw was certainly one of the most eye-catching figures. I was instantly taken with him, and he was a star player in my MOTU adventures, frequently teamed with another favorite, Tri-Klops. (Both were released at the same time, and both had the glow-in-the-dark "warrior's ring" packaged with them, forever linking them in my mind.) Making him even more intriguing was his origin story in the included minicomic: During one of Skeletor's schemes to enter Castle Grayskull via traveling through another dimension, Trap Jaw wound up inside the castle himself, forming a link with its power. Emerging from the castle, Trap Jaw proceeded to lay waste to all before him, forcing He-Man to join forces with Skeletor to defeat him! 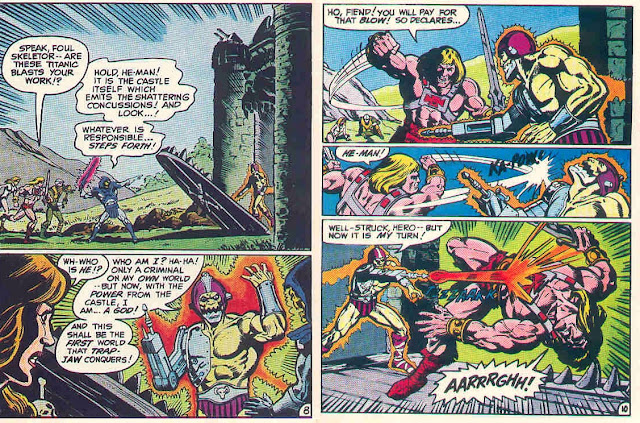 Of course, the 2002 cartoon and comic series lent him a different origin, which has been adopted into the MOTUC canon. The pirate and mercenary Kronis worked for Keldor during his bid to conquer the kingdom of Eternia and claim the throne that was his by right. After Keldor was transformed into Skeletor, the two came to be enemies, and Kronis was royally fucked up by his former master. Tri-Klops used his machines to save his life and replace his lost limbs with cybernetic parts, transforming him into Trap Jaw. It's a less impressive origin, but it certainly isn't without its merits. (And since the original minicomic didn't actually show us how he became Trap Jaw, the two aren't necessarily mutually exclusive!) 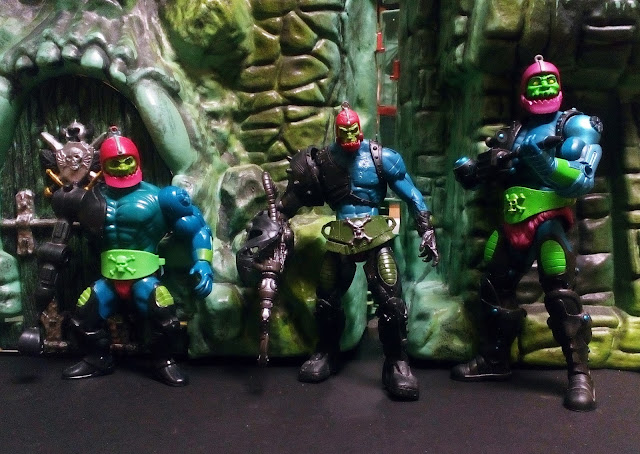 The sculpt on this figure is incredible. Since this was an update to a childhood favorite of mine, and the 2002 figure remains one of my favorite toys ever, the Four Horsemen had a lot to live up to, and they did it. There is some parts reuse, of course, but the majority of parts are new, and the work is excellent across the board. The mechanical arm lacks the crazy awesome details of the 2002 figure, of course, but it is still very cool. The head is the real star here, with a batshit crazy expression on Trappy's face, and the gruesome remnants of the lower part of his face lurking below his mechanical jaw. The one gripe I have with the sculpting is that all of the metal parts are perfectly smooth, and it would be nice to have some little dents and dings to show some of the wear and tear from all of the battles this guy participates in. 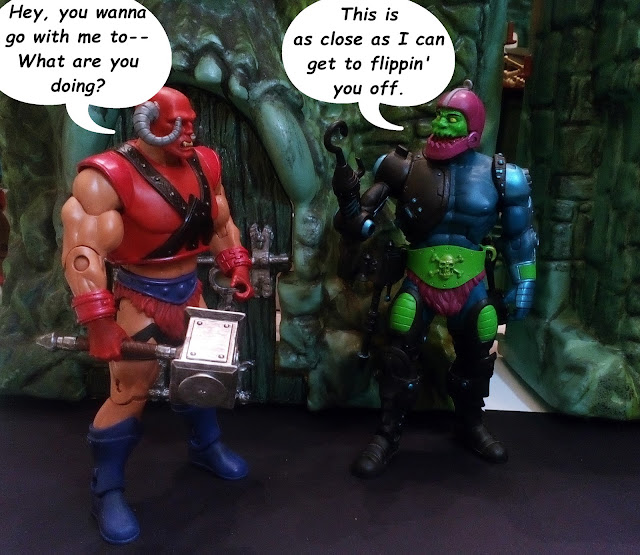 Articulation is standard for the line, with one exception: the mechanical jaw moves, which is a nice touch. Paint apps are good overall, though there are a few areas where they could be better. The green is a bit thin on the top of his face, allowing some of the underlying pinkish red to show through. The eyes are also a bit crooked, but thankfully, the "crazy eyes" look works very well for the character, so I don't hold that against the figure. The metallic blue accents on the arms and legs are nicely done, and help differentiate between blue skin and blue armor very nicely on the left arm. There are also some nice metallic accents on parts of the belt. Accessories are another area where Trap Jaw really shines. Not only does he include his three arm attachments, he has an extra head and arm, so you can swap out those parts and have a figure of Kronis! (Also included is an update of the warrior's ring that was packaged with the vintage figure. I forgot to dig it out when I was taking the photos for this review, d'oh!) This essentially makes Trap Jaw two figures in one, which greatly increases the value for the money. It's also really friggin' cool! The sculpting on these pieces is on the same level as the rest of the figure, and the head is especially good. The 4H have managed to create an alternate head that's nearly as compelling as the crazy-ass main head, which is no small feat! 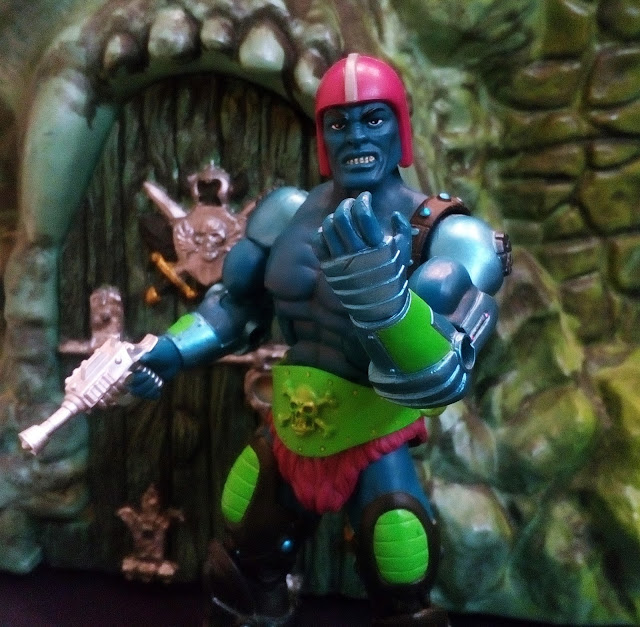 Trap Jaw became my favorite figure in the entire line upon his original release in early 2010. Now, seven and a half years later, I think he still might be the single greatest figure in the MOTUC line. Your mileage may vary, of course, but for my money, Trap Jaw represents the finest hour of a toyline that has produced some incredible action figures. Unless you just hate the character-- and honestly, even if you do-- this is one of those figures you simply must own. That's it for today, but scroll down for more photos, and creep on back tomorrow for the next review! 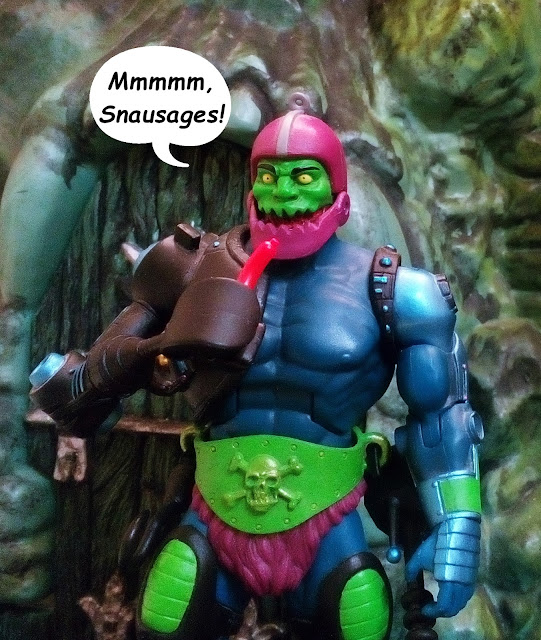 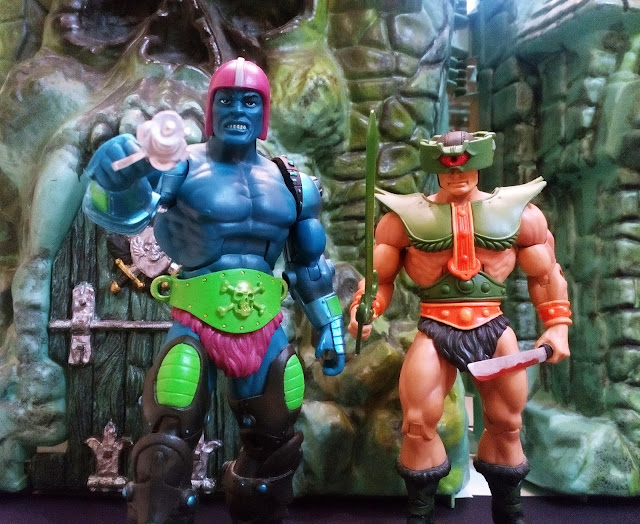 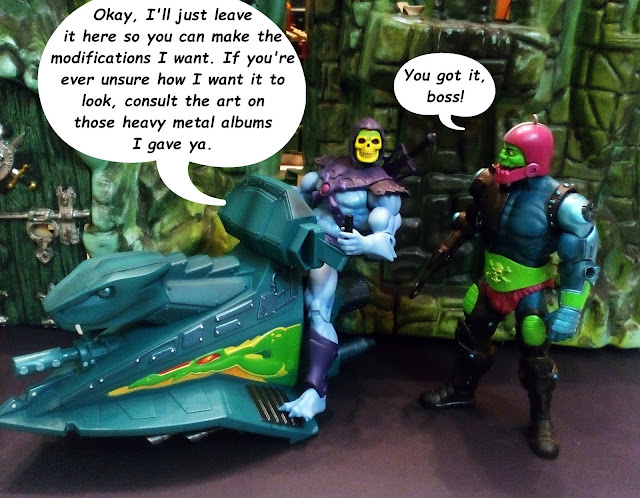