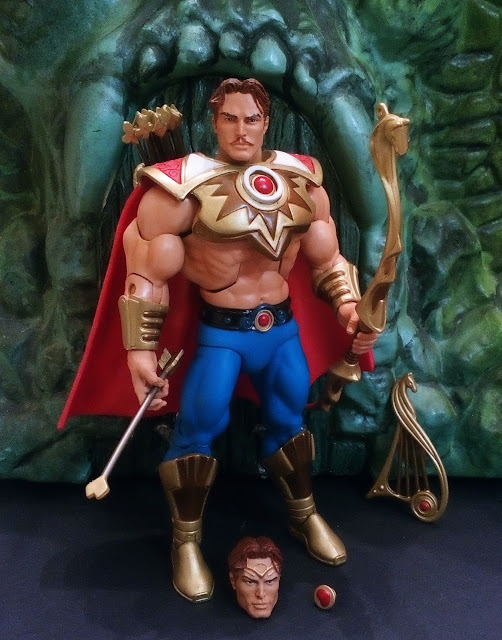 We've got yet another character from the She-Ra: Princess of Power wing of the MOTU universe today! As I've said before, I never got into PoP, but I've got no issues buying MOTUC figures based on those characters, as I'm only out for cool figures. While Bow has often been the subject of much derision, I've never really understood why. He hangs around with a bunch of hot women, and he's got the whole Errol Flynn/Cary Elwes vibe going for him. Seems pretty cool to me! Turning the typical superhero romantic triangle on its head, Bow is in love with Adora, not her superpowered alter-ego.  Although, according to his bio, "he has a magical heart that beats frantically when She-Ra is in danger." Uh... okay then. 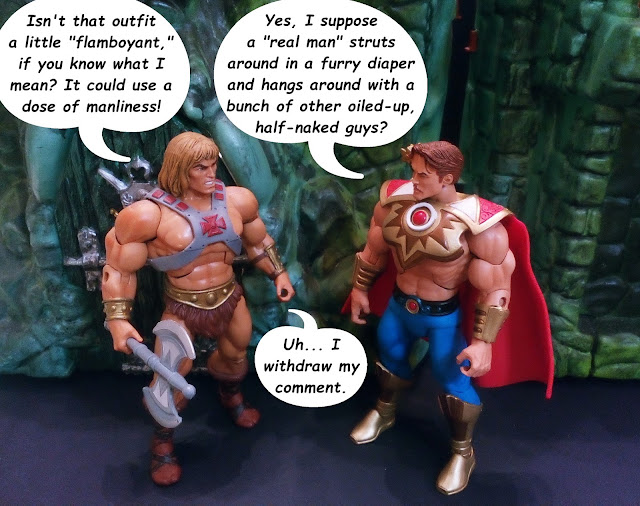 This figure has a fantastic sculpt, with quite a bit of new tooling. The Four Horsemen drew a bit more from the Filmation design than the vintage toy, while adding quite a bit of detail to bring the design to current standards. There are two heads included, a mustachioed Filmation-style head, and a clean-shaved vintage toy-style head wearing a crown. Both are great sculpts, though I prefer the one with the 'stache. The arrows sculpted into the quiver have a cool playing card motif. There is some nice detailing on his gauntlets and boots, and an intricate pattern on the side portions of his armor. Bow is a showcase for how much better certain figures could have been if the same level of detail and artistic license by the 4H had been applied to them as well. 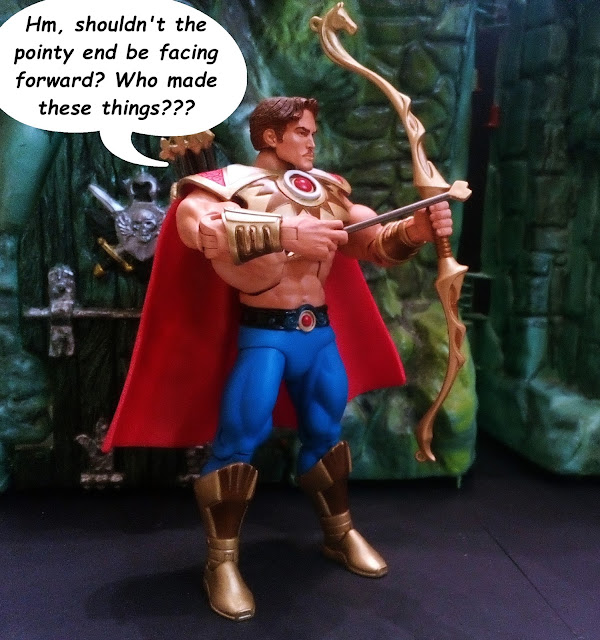 There are a couple of issues with the figure, however, and both involve his armor. The armor doesn't want to stay in place, and is constantly sliding back or to one side. It really needed a pair of straps running from the lower front and around the back to hold it in place. The 4H seem to like giving us strapless armor whenever possible, for whatever reason. It's rarely as big an issue as it is here, though. The quiver has a cord attached, and there's really no good place to put it. The cardback shows it looped over his head and under his neck, but frankly, that just doesn't look good to me, and it impedes the ball-jointed head a bit. I tried looping it under his arm, but that only makes the armor slide to that side. I wound up just cramming it underneath the quiver to keep it out of the way. 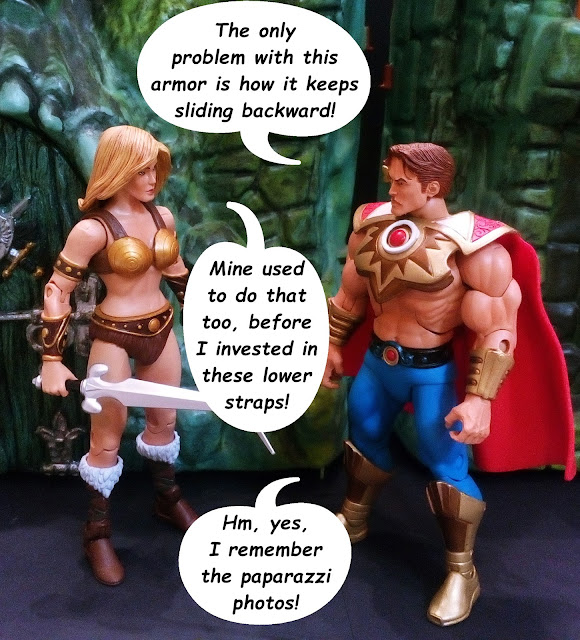 Bow has the standard MOTUC articulation, along with a little something extra: In addition to the standard ball-jointed head, shoulders, and hips, hinged elbows, knees, torso, and ankles, and cuts at the waist, biceps, wrists, thighs, and boot tops, Bow also has a hinge at each wrist. This is to help pose him with his bow, and it helps tremendously in general posing. As with Green Arrow in their DC Universe Classics line, Mattel added a POA to a single figure that really should be standard across the line. It's damn nice to have those wrist hinges here, but it really drives home how nice it would be to have them on all figures. I had a few joints on my figure that are very tight, but I'd prefer that to loose ones. 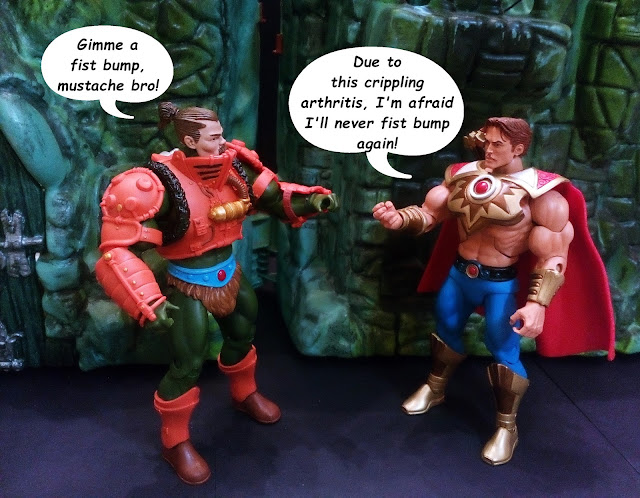 Paint apps are below average, with a good bit more slop and over/underspray than I like to see, especially at this price point. Bow's hairline fared poorly on both heads, and I'll definitely be grabbing the brush to do some touching up. The white ring on the chest armor is very gloppy, and seems to have been applied quite thickly. There's also a lot of slop on the belt buckle, and the gauntlets have a few spots where paint simply wasn't applied where it should have been. These are just the most obvious paint issues; there are definitely more. This is significantly worse than we usually see in this line. Bow has a nice assortment of accessories, including his bow, and arrow, his harp, a different swappable chest armor logo, and the aforementioned extra head. The bow lacks a string, so you'll have to attach one yourself if you want one. Considering it was probably a choice between either a stringless bow or a molded plastic string, I think they made the right call here. The harp and bow both have a very cool horse motif. He does have some trouble holding the arrow, though, even though his right hand is sculpted to hold the shaft between two of his fingers. The chest logo swaps without much trouble, though I imagine you'll want to toss the one you're not using straight into the extras box to avoid losing it. I would have liked to see the 4H craft a sword or dagger for him as well, but I'm sure I can find something in the accessory box that's suitable for him. 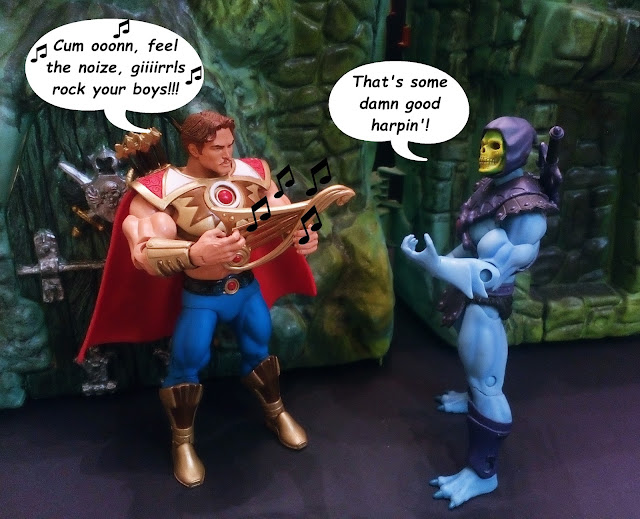 I wish the paint apps were neater, and the sliding armor is annoying, but I still think Bow is one of the best figures in the entire MOTUC line. Visually, he really pops, and his suave head sculpt and extra articulation really help to make up for the relatively minor issues the figure has. Even if, like me, you're not a PoP fan, Etheria's resident archer deserves a spot on your shelf. That's all for today, but be sure to swing by next Tuesday for the next review! 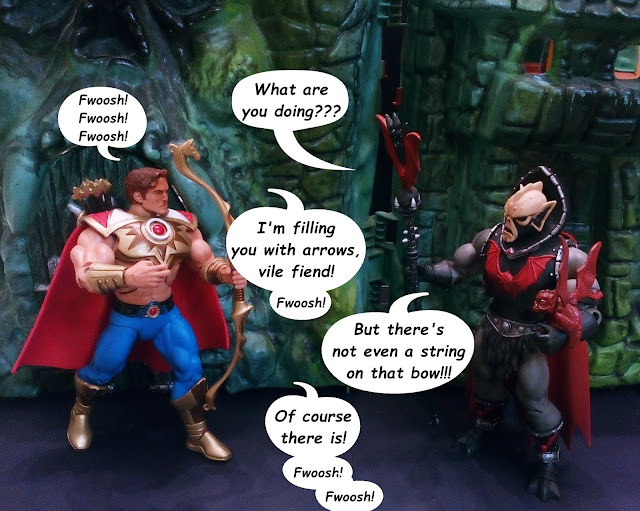