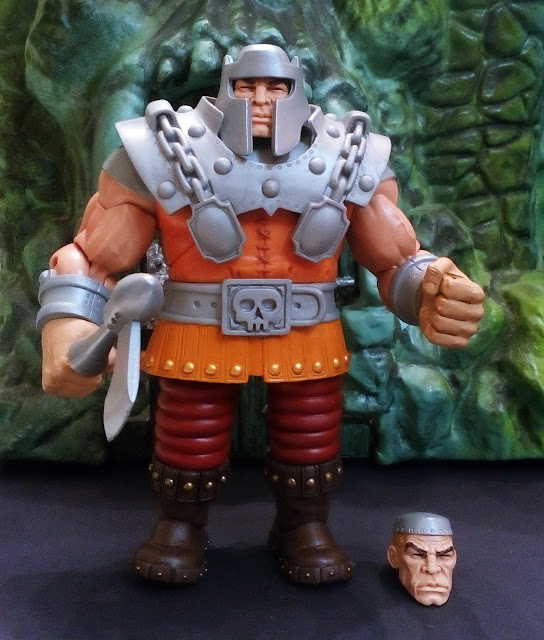 One of He-Man staunchest allies, Ram Man was present nearly from the beginning of the MOTU line. He received his own minicomic by Gary Cohn and Mark Texeira, which saw him duped by Skeletor into attacking Castle Grayskull. This characterization as a well-meaning but slow-witted physical powerhouse quickly became the standard depiction of the character. 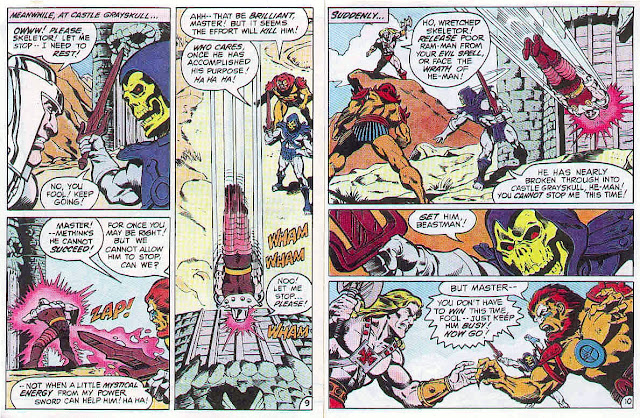 As one of the handful of MOTU characters who are well-represented in pretty much all media, Ram Man is one of the most important and well-known of He-Man's allies. As part of the vintage toy line's second series, he was also one of the earliest figures released. Unfortunately, since he required 100% new tooling that had very limited potential for reuse, collectors had to wait quite a while for him to receive a figure in the MOTUC line. As with many figures in the line, sculptors the Four Horsemen based his look on the vintage cross-sell art(seen below, image via the excellent Battle Ram Blog), but the decision was made to use the color scheme from the vintage toy rather than that of the art. This was a somewhat controversial decision, but now, with this reissue from Super 7, collectors can have it both ways! (Assuming they've got deep enough pockets, anyway.) 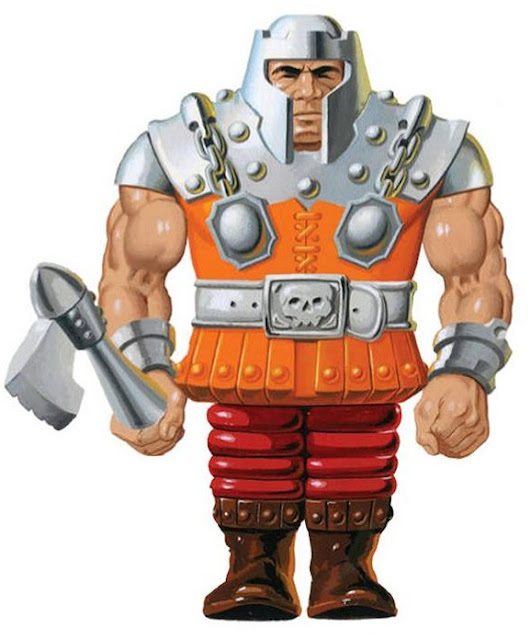 Unsurprisingly, the 4H has absolutely nailed the look of the vintage cross-sell art with this sculpt. As someone who used to look at that art on the backs of my minicomics and wish I had a Ram Man figure that looked that cool, I'm thrilled to finally have one who looks as if he stepped right off the page. The head sculpt is divisive, as many collectors dislike the squinty-eyed expression, but it looks great to me. It's a face with a hell of a lot of character. It would have been nice to get a different expression on the alternate head as a compromise, though. Speaking of that alternate head, it's similarly well-sculpted, and while I'm not thrilled with the design-- it just seems weird that the metal plate is apparently part of his head, and the huge ears look rather weird-- it's all sculpted and detailed extremely well. The body sculpt also has some nice details, with lots of studs and rivets in appropriate places. Ram Man is also HUGE. He's not any taller than the standard MOTUC figure, but he's nearly twice as wide! I've waited more than thirty years to have a Ram Man figure that is sized appropriately, and it's damn nice to finally have one! I only have two gripes with the sculpting. First, it would be nice to have some dings and dents in the armor. I mean, this big burly bastard smashed into all kinds of stuff head-first, so you'd expect to see a bit of wear here and there, right? Second, Rammy has no neck! The area between the pauldrons is just a smooth expanse of grayness, and while this isn't noticeable with the standard head in place, when you switch to the alternate head, it looks very strange. This isn't a problem for me, as I'll only be using the standard head with my figure, but it will be a serious issue for anyone who prefers the alternate head. 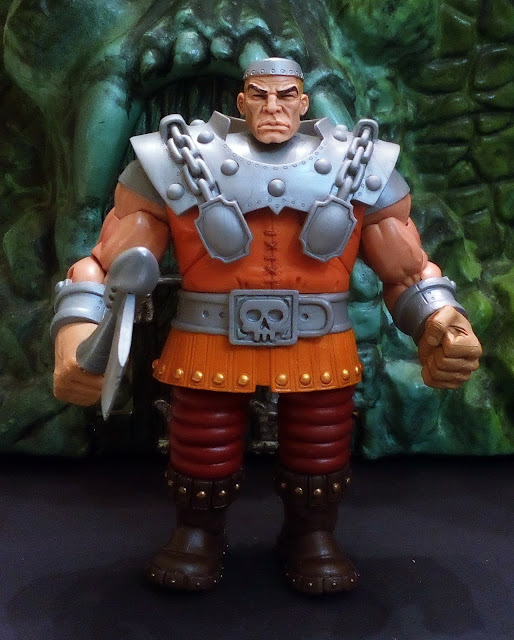 Articulation is standard for the line, with ball joints at the head, shoulders, and hips, hinged elbows, knees, ankles, and torso, and cuts at the biceps, wrists, thighs, boot tops, and waist. The head has a very limited range of motion due to the armor's design, unfortunately. The alternate head moves much more freely. Accessories include the aforementioned alternate head and Rammy's trademark axe. The axe is a perfect update of its vintage counterpart, and fits nicely into the figure's right hand. 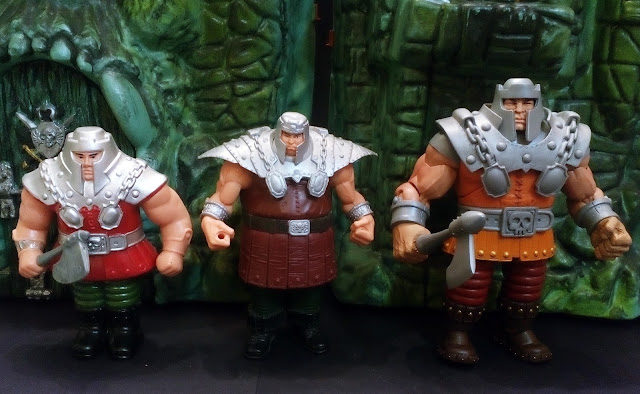 With the paint, we run into the only real problems with this figure. First, let's deal with the elephant in the room: The armor has a dull matte finish, instead of the shiny silver it had when first unveiled, when it was for sale on Super 7's website, and as shown on the packaging. Customers didn't find out about this change until the figures started arriving on doorsteps. It's unclear why this change was made, but it seems that most people were not happy about it. Personally, I think it looks fine, but not as good as the shiny silver armor does on the original MOTUC version of the figure. I'll be applying a gloss coat to my figure's armor to address this. The second issue is that the entire "skirt" piece is molded in the same dull gray, and the orange part of it is painted very sloppily. There's a particularly large unpainted gap underneath the belt buckle. (It should be noted that the gray belt and buckle are accurate to the cross-sell art on which this figure's look is based, so I can't rightfully hold that against it.) Again, I can fix this without much trouble, but I shouldn't have to. The third issue is that the hands were not molded in the same color plastic as the figure's arms, so they have a sickly yellowish tinge that doesn't match the rest of the figure's "skin." There is also some general sloppiness in the paint all over the figure. I've spotlighted a couple of the worst areas below. Paint issues are pretty easy to fix, but it's still a shame to see so many, especially on such a pricey figure. This many paint issues give the figure a rather cheap appearance, which is the exact opposite of what we should be seeing when these are being sold as high-quality adult collectibles.

That last paragraph may make it seem as if I'm not crazy about this figure. The many paint issues are disappointing, but they can at least be corrected. Every other aspect of this figure is so well executed that I can't help but love it despite its flaws. Once I do a bit of repainting, Ram Man will be one of my favorite figures in the entire MOTUC line. He's a pretty essential character, too, so it's a shame that he's so damned expensive on the secondary market. That's it for today, but scroll down for more photos, and swing back by next week for the next review! 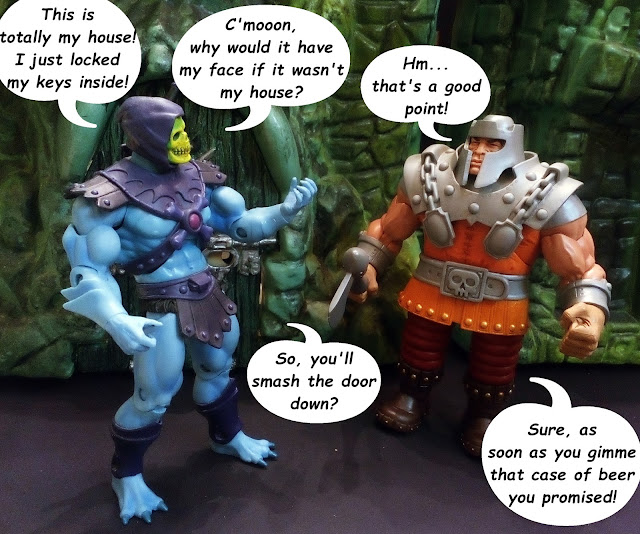 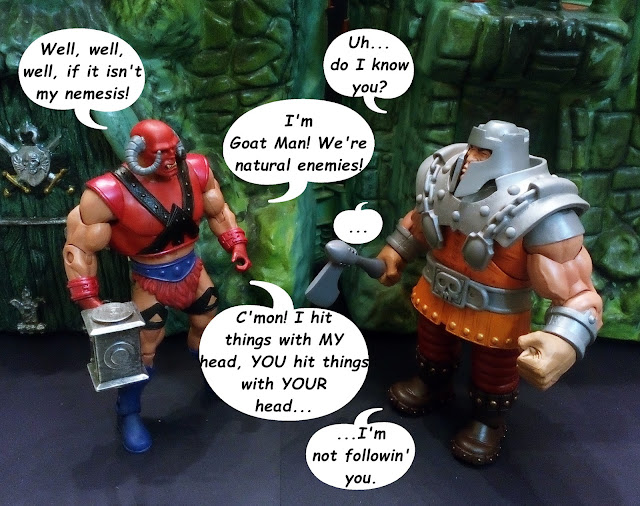