When the 2002 Masters of the Universe line met a premature end due to Mattel's total mishandling, it left collectors with woefully incomplete collections, with core characters such as Clawful and Hordak absent. Another casualty of the line's early demise was any and all figures based on the cool original characters that had been introduced in the tie-in animated series. One of the most frequently demanded of these was Prahvus. Appearing briefly via flashbacks in two episodes, Prahvus was a warlord who was active during the Great Unrest, the period that spanned the two decades between Keldor's defeat and banishment behind the Mystic Wall, and his return as the infinitely more dangerous Skeletor. And... that was all we really knew about him. Still, with his very cool and intimidating design, he made quite an impression on viewers. Now, once more, the MOTUC line is able to correct a wrong by giving us a figure we never got before! 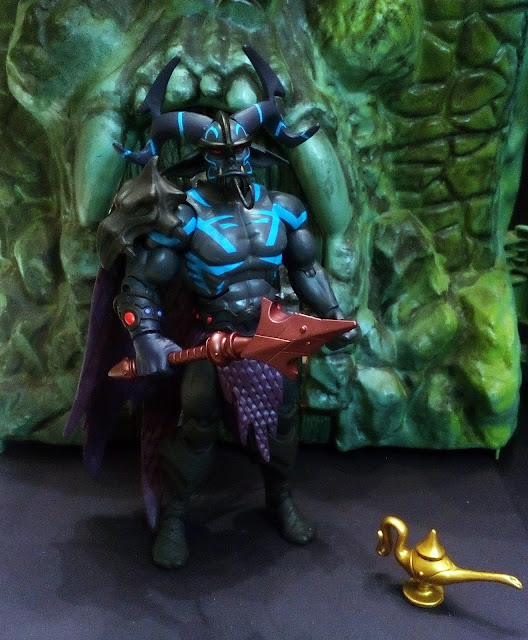 The bio gives us a bit more information, in that he eventually becomes an enslaved member of the Horde, and that he dwells inside a magic lamp. The djinn motif carries over to several details of the figure, with his long, curling beard, glowing eyes, and pretty much his entire head evoking various djinn designs. The beard is a very soft plastic, while the horns are far more rigid. It's an impressive sculpt, and stands out even among the extremely varied heads in this line. The rest of the sculpt is largely reused parts, as per usual, but Prahvus gets all the new parts he needs. Everything is sculpted with the care and attention to detail we've come to expect from the Four Horsemen, with the texture on the cloak and loincloth standing out, in particular. The cloak is attached to the right shoulder, so it can look a bit odd in some poses. Here's a closer look at the cloak's texture: 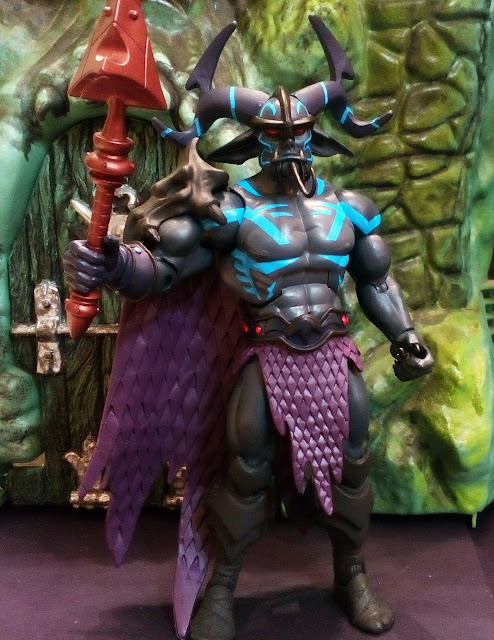 Paint apps are kinda all over the place. Some areas, such as the eyes and blue tattoos, are very neat, while others, such as the red bumps on the belt, are quite sloppy. There is also a lot of overspray on the back of the cloak. Articulation is mostly standard for the line, with ball joints at the head, shoulders, and hips, swivels at the biceps, wrists, thighs, and waist, and hinge joints at the elbows, knees, ankles, and torso. Prahvus lacks the swivels at the boot tops that most MOTUC figures have. Despite the large horns and ears, the head has an excellent range of motion, and the large skull on the cloak rarely gets in the way. Prahvus comes with his large club and the lamp that occasionally serves as his prison. Both accessories are sculpted well, but could benefit from some additional paint apps, or even a paint wash to bring out the details. 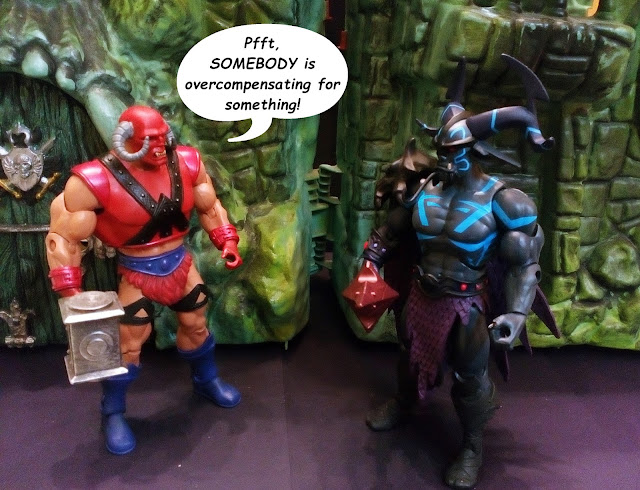 For a character with such a tiny presence in the MOTU mythos, Prahvus definitely cast a long shadow, and it's very nice to finally have this long-awaited figure of the character! The few issues I noted above are really just nitpicks. This is a great figure, and his backstory is open enough that he will easily fit in with any faction you feel like plugging him into. He'll even work quite well as a Preternian antagonist for King Grayskull, or an ally of Demo Man menacing the mighty Vikor! Wherever he winds up on your shelf, Prahvus will make for a menacing presence, and a damn good addition to the collection. That's it for today, but be sure to come by next Tuesday for the Xmas review, which focuses on a figure I've wanted to get to for quite some time! In the meantime, scroll down for more photos, and I hope you all enjoy whichever holiday(s) you celebrate! 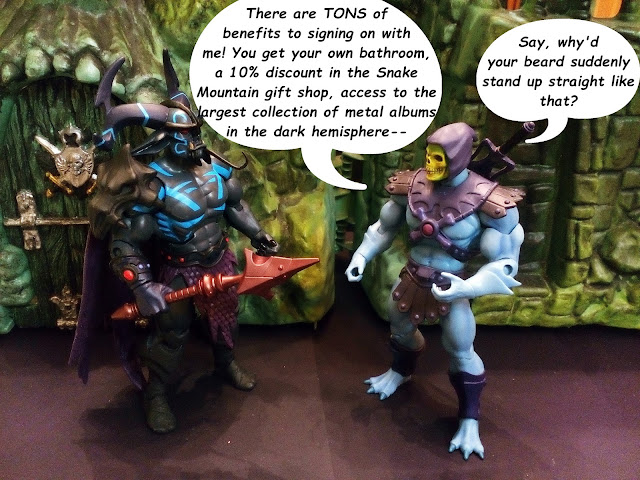 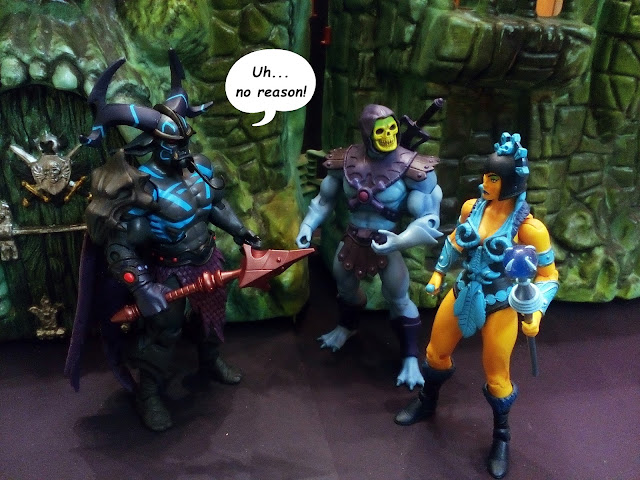