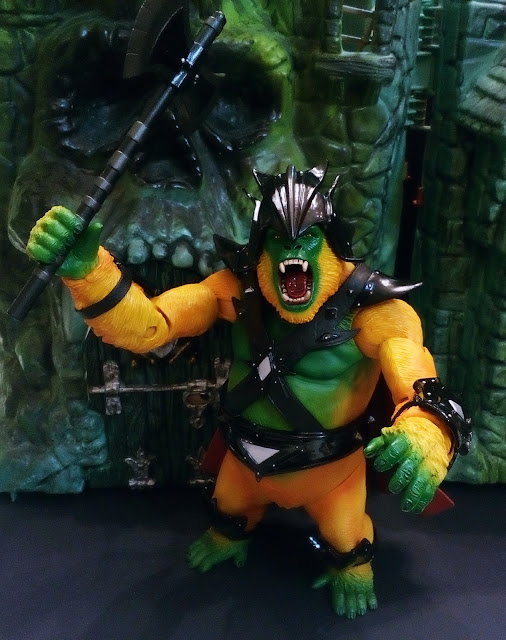 My friends are well aware of my affection for apes and monkeys. (It's possible, even very likely, that  this can be traced back to the original King Kong leaving such a huge impression on me when I was very little. I'm not sure exactly how old I was the first time I saw it, but I know it was at least a couple of years before I started school.) In fact, one of the reasons I liked Beast Man so much when I was a kid was because he was so apelike. So, it was with mixed emotions that I learned about Gygor years ago. Developed for the vintage MOTU line, he was a bright yellow gorilla, re-using the gorilla from Mattel's earlier Tarzan line(which was also the source of the cat mold used for Battle Cat and Panthor). Concept art depicted He-Man riding on his back, though it's unclear whether or not this indicated Gygor's allegiance, as heroic/evil discrepancies were fairly common in the concept stage. (A photo of the original prototype is below, courtesy of He-Man.org.) On the one hand, I always love seeing concepts that were never realized. But on the other hand, I couldn't help feeling a bit sad, as I knew how much I would have friggin' loved that toy when I was a kid! 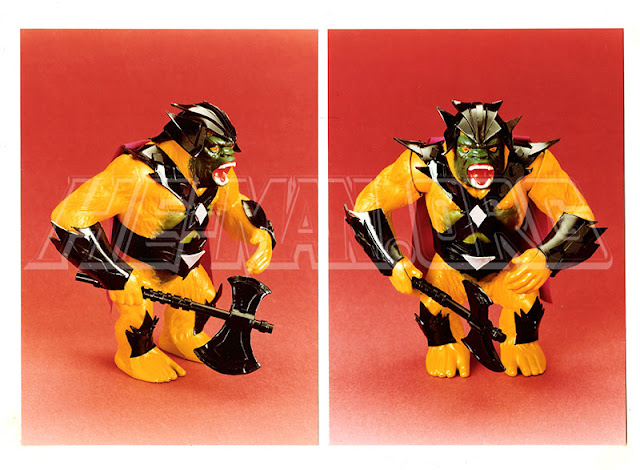 Thankfully, one of the MOTUC line's specialties is bringing long-forgotten concepts to life, so I finally have the bright yellow ape warlord toy that my childhood self was denied. His bio places him squarely in the evil camp, first as an independent villain, later as a part of Skeletor's army. The first thing I noticed about Gygor-- once I got past the bright yellow, anyway-- was his size. It's one thing to know that he stands a hair under ten inches tall, but actually having the toy in-hand and seeing how he dwarfs nearly everything else on the shelf is quite another. He has an impressive shelf presence, and the expressive head sculpt only enhances it. Most collectors seem to be pretty divided on screaming head sculpts. Personally, I think some sort of expression is preferable to the blank zombie stare so many action figures are afflicted with, especially when it suits the character, as it does here. Gygor is a rampaging ape warlord continually thirsting for battle, and this head sculpt makes damn sure no one will forget it! As for the rest of the sculpt, it's fantastic. Furry bodies give the Four Horsemen free reign to indulge in the detailed sculpting they excel at, and Gygor is no different. This is a very realistic rendering of a gorilla, with meticulous detailing even on the interior of his mouth. 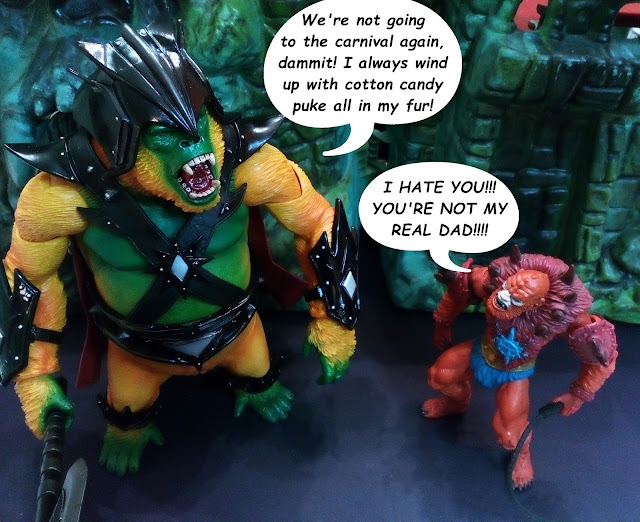 There was much debate over whether or not Gygor shared some parts with Grodd from the DC Universe Classics line, even after the 4H assured us he did not. (Even with the size difference, the same sculpt could have been used in the pantographing stage to create the new tooling.) Even if you don't want to take the 4H's word-- and we have no reason not to, as they've never tried to bullshit the collector community-- a simple side-by-side comparison of the two makes it clear that they are different sculpts. There are many similarities, of course, but how many different ways can the same guys sculpt the same animal, after all? 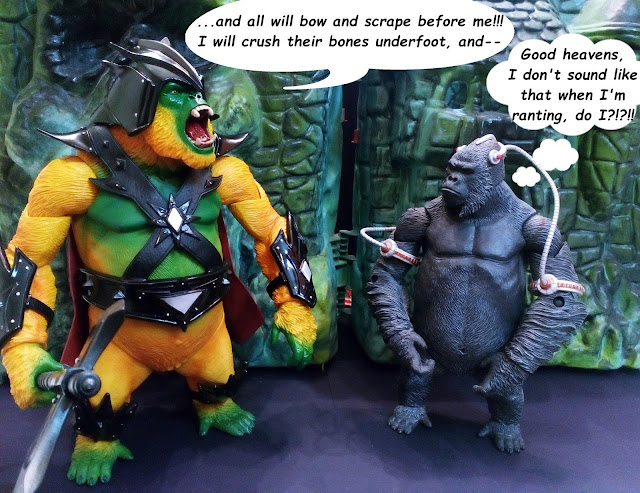 Once you get used to Gygor's impressive appearance, you can't help noticing all the ways in which his articulation lets the figure down. He fares fairly well above the waist, with a ball-jointed head, ball-jointed shoulders, and cuts at the biceps and wrists. The head has a good range of motion with the helmet removed, and it's not too restricted even with it on. Unfortunately, he might as well be a statue from the waist down. He has a diagonal cut at the top of each leg, and a cut joint at the top of each foot. Ball jointed hips wouldn't have looked very good, but I would have definitely preferred the additional posing opportunities they provided. A waist cut could have been placed so that it was concealed by the belt. Swivel/hinge wrists would have greatly improved the posing options for the arms, and coupled with a hinge in the torso, would have allowed Gygor to be posed in the classic ape pose of walking with his knuckles on the ground in front of him. 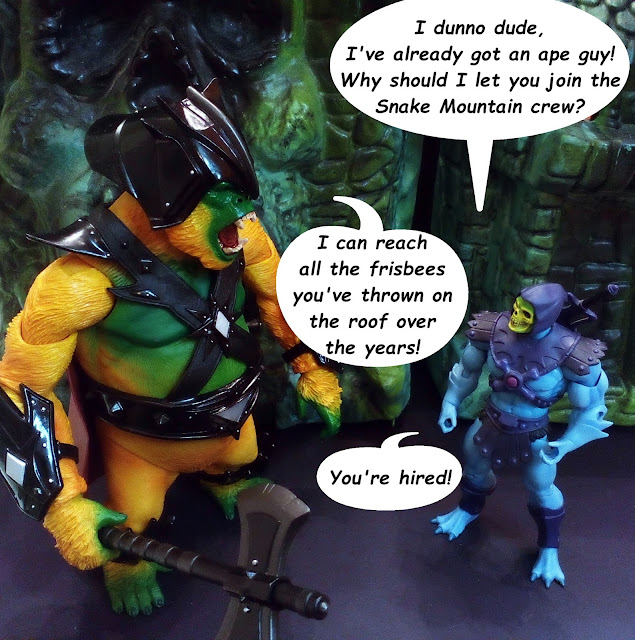 Paint apps are quite good overall. The bright yellow contrasts nicely with the darker green, and there is a nice paint wash over the yellow areas to add some nuance to the color scheme and bring out the sculpted details. Most of the detailed paint apps are on the face, and they're very well done. The teeth are very neat, and the entire mouth has a glossy finish to give it a moist appearance. The armor switches between matte and glossy black to differentiate between different materials, and it works very well. A few silver accents complete the look. Gygor's accessories include the aforementioned armor, which looks very cool and adds to his imposing appearance. It's all removable, though a few of the pieces are kinda tricky to take off and put back on. He also has a very large axe, which can also be held by any of the other giants in the line if you feel your ape warlord doesn't need an axe.

Despite the disappointing articulation, Gygor is as cool as they come. As a character hardly anyone knew about until a few years ago, he lacks the nostalgia that is such a draw for many figures in this line, but he more than makes up for it simply by being incredibly goddamn awesome. Scroll down for more photos, and be sure to swing back by next week for another review! 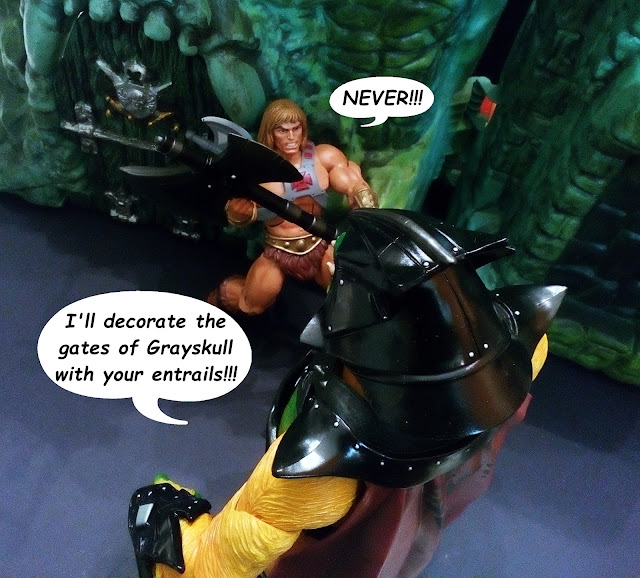 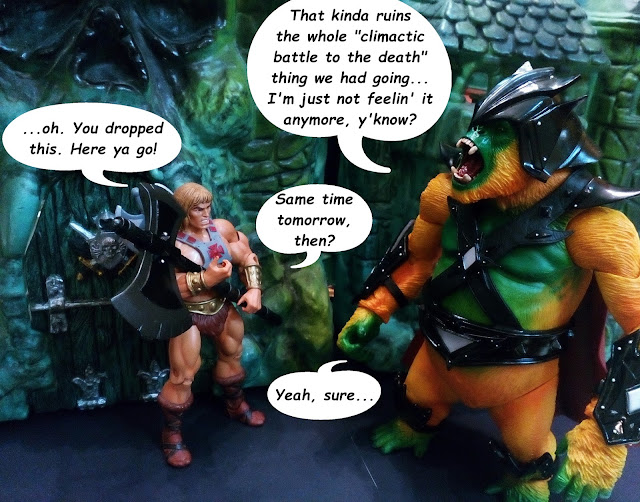