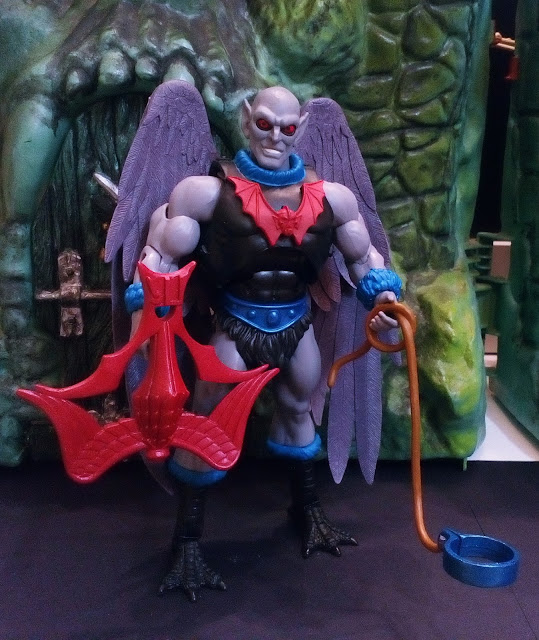 Today we're looking at a minor character from the MOTU spinoff series She-Ra: Princess of Power. I never got into that show, not because I thought it was "for girls," but because I was never a huge fan of the Filmation cartoons in general. While I did watch the MOTU cartoon, and I enjoyed it for what it was, the lack of my favorite characters in the PoP cartoon made it a non-starter for my childhood self. Still, unlike many collectors, my MOTUC collecting is not dominated by nostalgia, so I want any figure that looks cool, even if I barely know who the character is. So it is with Vultak. Appearing in only two episodes of the show, the vulture man served as Hordak's zookeeper-- because naturally, a tiki-demon supervillain has just gotta have his own personal zoo-- and apparently had the ability to transform himself into some sort of vampiric shadow creature. Which, honestly, is pretty goddamn cool. For whatever reason, this ability was not used when he appeared in the recent DC Comics MOTU series. I would be inclined to lead with that, personally, rather than "Hordak's zookeeper," but I reckon that's just me. 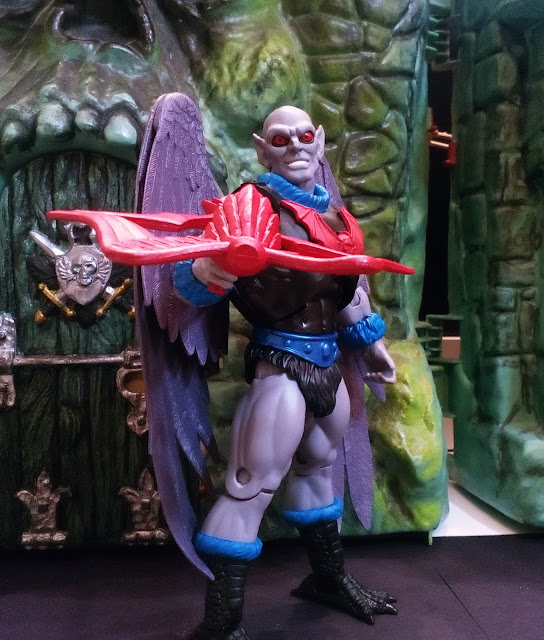 The figure makes use of many parts we've seen before, of course, with a few new pieces. Vultak was sporting the standard wrist bracers when he was first revealed, but due to fan response, the MOTUC team made use of the recent furry bracers that were created for Icer, which make for a more accurate look. The head sculpt is fantastic, with sharply sculpted features and a truly demented expression. I mean, just look at this guy; he looks like a total lunatic! It definitely makes sense that a flying Count Orlok-impersonating vulture dude who spends his time capturing animals for a supervillain's private zoo would be pretty unhinged. The bird's feet boots are also well done, with a great sculpted texture. Who can say whether these are supposed to be boots, or his actual feet? It could really go either way. The armor is also new, with the requisite furry collar. I still miss the lower armor abdominal piece on armored figures. After fan outcry led to that piece being shelved, we've been left with figures who appear to be wearing skin-tight tank tops underneath sports bra armor ever since, complete with a navel. It's not a huge deal, but it is an annoyance. 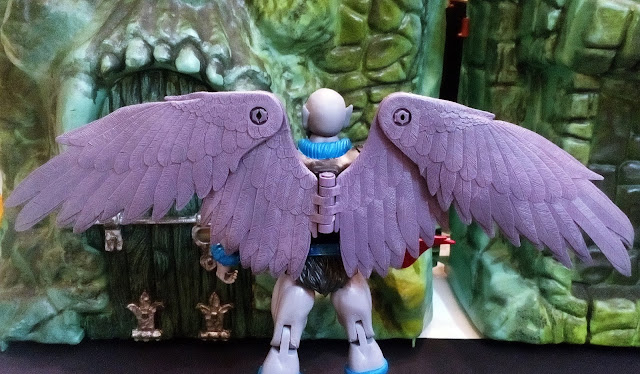 A more major gripe is the way the wings are attached. Instead of a ball popping into a socket joint on the figure's back, Vultak reuses the wings from the DC Universe Hawkman figure, and consequently, has that terrible hinge connection on the back. It doesn't work as well as a simply ball & socket connection would, and it looks truly awful. I really wish these wings and this style of connection would be permanently retired. That aside, the actual wings have a great sculpt, and there's a swivel at the peak so they can fan out if you have the space for it on your display shelf. 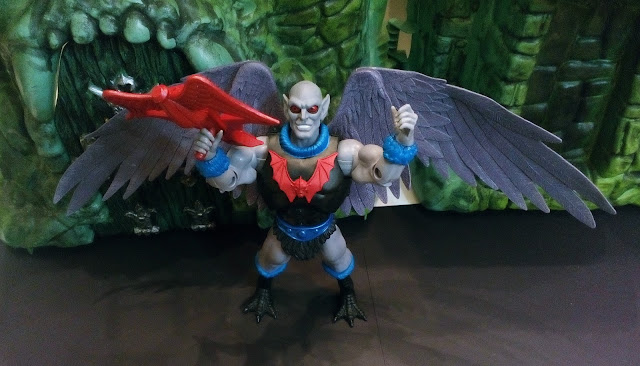 Articulation is mostly standard, with a very good ball-jointed head, ball-jointed shoulders and hips, hinges at the elbows, knees, and ankles, cuts at the wrists, thighs, bot tops, and waist, the aforementioned wing joints, and the newer ankle rocker joints. Hinge wrists would be nice, as always. It's very annoying that those are standard for the Filmation-style figures, but not for the main MOTUC line. The minimal paint apps are good overall, and the eyes are especially neat. The pupils on mine look like they may be a bit off, but as with Trap Jaw, the crazy eyes definitely suit the character. There seems to be a faint wash on the wings, which is nice, but I think a heavier wash would have worked much better. This one is so faint that it's honestly rather tough to even see. Vultak comes with his requisite Horde crossbow, nicely designed with a bird theme, and a leash and collar for when he's feeling kinky. The collar fits nicely around the necks of female figures and smaller figures from other lines, but it should be noted that the leash is so hard and inflexible that it's kinda tough to pose both figures in a way that looks good unless you have him hold it somewhere other than the spot he's intended to. (Refer to the reviews of Clamp Champ and Serpentine King Hiss if you've missed the running joke referenced in the photo below!) 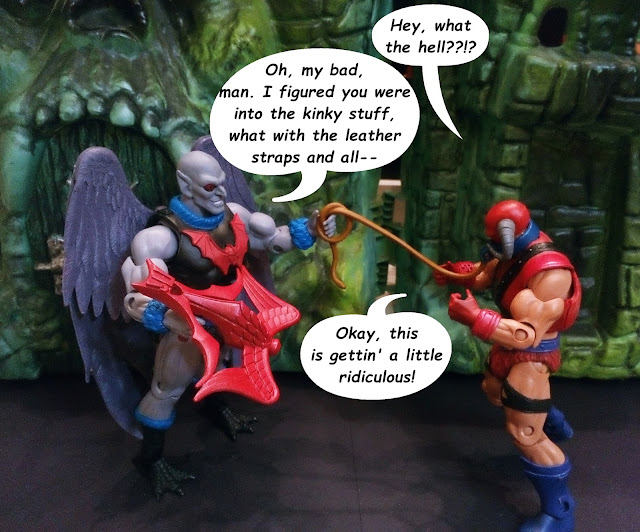 While he's not a core member of the Horde, Vultak helps flesh out its ranks well. He has an interesting look and a great head sculpt, and despite a couple of design issues, he's a very cool and fun figure overall. This is definitely one of those cases where the phrase "greater than the sum of its parts" applies, and I find myself liking this figure far more than I expected to just from looking at photos of him. If you're not really interested in PoP figures, don't give this figure a pass just because of that. He's a member for a faction that, honestly, needs all the members it can get due its relatively small size compared to the two main ones, and he's also a demented-looking monster dude. Those are always a good thing! You can currently get him for under $20 on Mattel's ebay store, so head on over there if you fancy adding him to your collection. That's it for today, but scroll down for more photos, and swing back by next Tuesday for the next review! 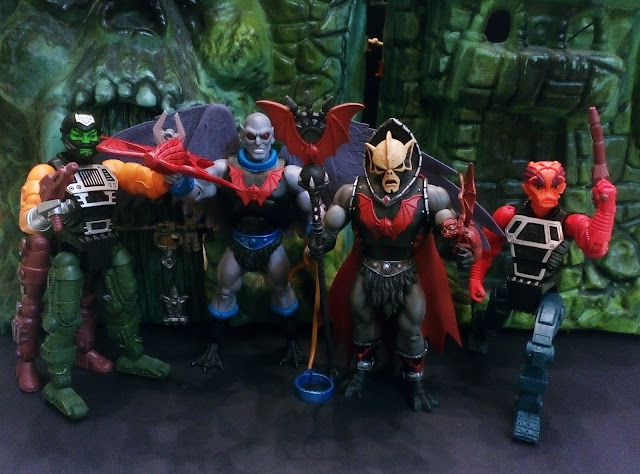 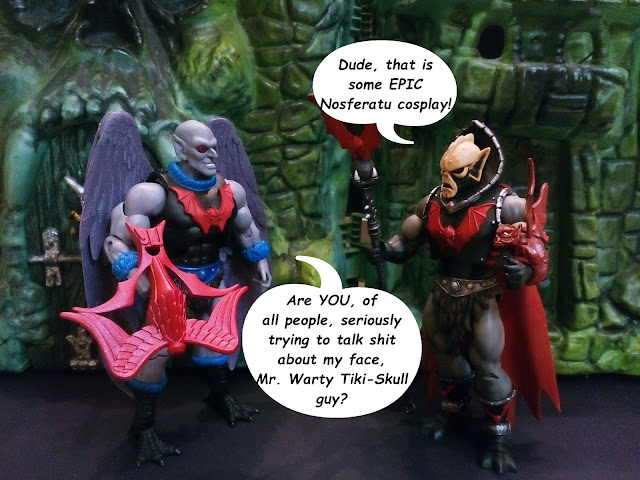