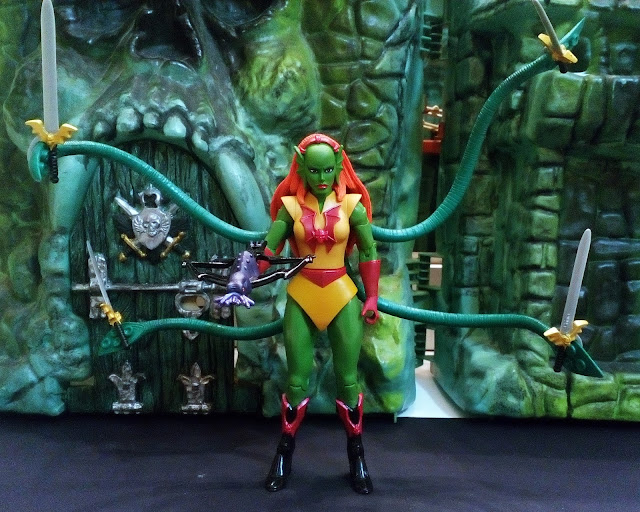 I've established that I never got into the She-Ra cartoon, and I'm not really familiar with its cast, apart from the basics. That said, my MOTUC collecting is nowhere near as nostalgia-fueled as that of many others, so I'm always down to pick up any figure that looks cool, no matter what its source may be. So it was that I wound up with an Octavia figure. A couple of minutes of internet research tells me that she only appeared on two episodes of the cartoon-- man, what was Filmation's deal with having really cool characters show up only once or twice when they had hundreds of episodes to work with?-- and possibly had energy-draining abilities along the lines of fellow Horde member Leech. Having no attachment to the character, I wanted her because she's a cool sinister-looking octo-lady with a Cthulhu crossbow. Oh, and I suppose being a redhead never hurts! 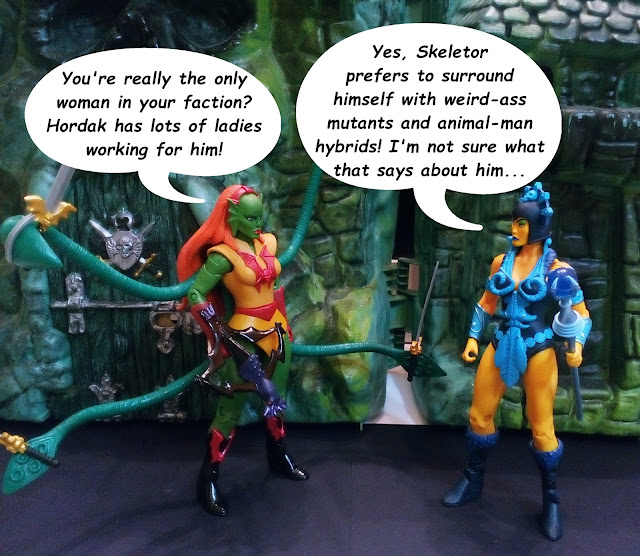 The sculpt has some serious peaks and valleys. On the plus side, the head is excellent. As talented as they are, the Four Horsemen often seem to struggle when it comes to female head sculpts; a casual look at the females of this line and the DC Universe Classics line make that very clear. None of the common issues are apparent with Octavia, however. The 4H have given her a face that is attractive, yet tinged by cruelty, with sharp cheekbones and sunken cheeks that lend her a somewhat ghoulish demeanor. Truly fantastic work here! The tentacles are similarly awesome, with lots of detail lending texture to the extra limbs. Now, we come to the bad, or should I say, the bland. Octavia's entire outfit is a blank expanse of absolutely no detail. There is so much that could have been done here to lend texture to the figure's clothing, and the 4H are definitely capable of it. This is likely a design choice that was made to appease the very vocal contingent of MOTUC collectors who insist that Filmation-based characters maintain a similar aesthetic, despite their presence in a line that normally has a certain level of detail. It's a jarring contrast between the bland clothing and the very detailed tentacles, but this is an issue that has afflicted virtually all of the PoP figures, unfortunately. 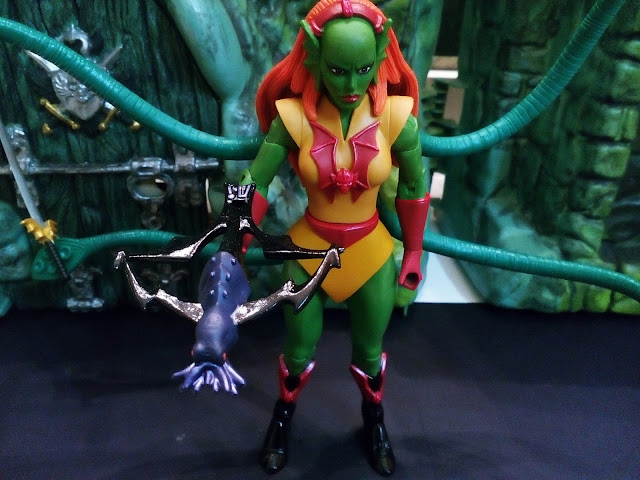 Paint apps are mostly neat, though there is a bit of slop around the headband. The eyes and lips are very neat, thankfully. A paint wash on the tentacles would have been nice, but then, that would have made the differing levels of sculpted detail even more obvious, so perhaps it's for the best that no wash was applied. This is more a plastic than paint issue, but it's worth noting that the tentacles are a different shade of green than the rest of the figure's "skin." They're noticeably darker, and it's very apparent even to the naked eye. Articulation is standard for the line, with a few exceptions. Octavia has a ball-jointed head, ball joints at the shoulders and hips, hinges at the elbows, knees, and ankles, and cuts at the biceps, wrists, thighs, and waist. As a female figure, she lacks the abdominal hinge. (As we all know, women are incapable of bending there, right?) Each tentacle has a pin & swivel joint where it attaches on Octavia's back. (And these things are a pain in the ass to get attached! There should have been a medal included as a reward for attaching them without breaking anything.) Unfortunately, the tentacles severely limit the range of motion of the figure's head, and the long hair, in turn, limits the posing possibilities of the tentacles. This could have been alleviated by using softer plastic for the hair, but it's pretty stiff, unfortunately. With the tentacles attached, she's basically stuck looking straight ahead and slightly downward. 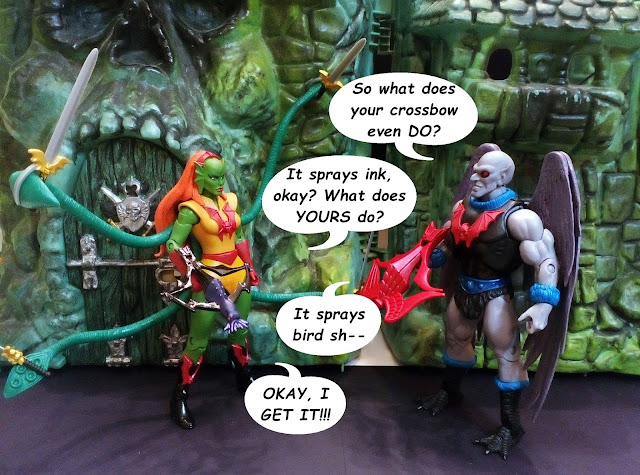 Octavia does well on the accessory front, with four swords, and a crossbow that she picked up at her local Nameless Old Ones outlet store. The swords have a nice design, with a hand guard designed to hold them in place at the end of each tentacle, so she can "hold" all four of them while still keeping her hands free for other things. They also have a pretty cool design, with hand guards modeled on the Horde bat emblem. If only they didn't have "CHINA" stamped on the side of the blade in big letters... 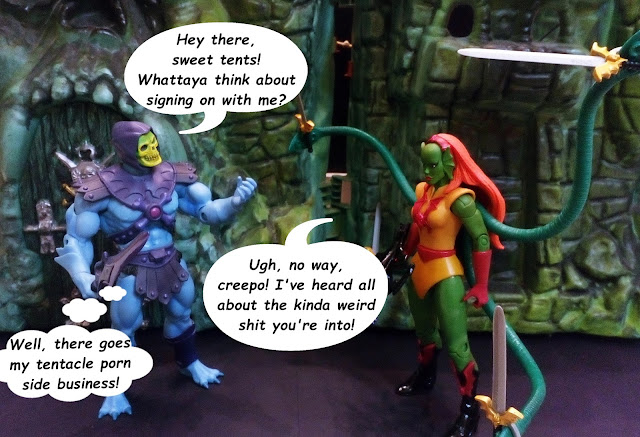 My issues with the lacking detail in part of the sculpt aside, this is a very cool figure, and I'm pleased to add her to the ranks of the Horde. She has an eye-catching color scheme, and despite the limited posing options, she looks pretty intimidating on the shelf, even alongside the various monsters that make up the Horde. She's actually one of the cheaper MOTUC figures on the secondary market, so you should be able to find one for a decent price without too much trouble. Scroll down for more photos, and be sure to check back in Thursday for a special bonus Thanksgiving review! 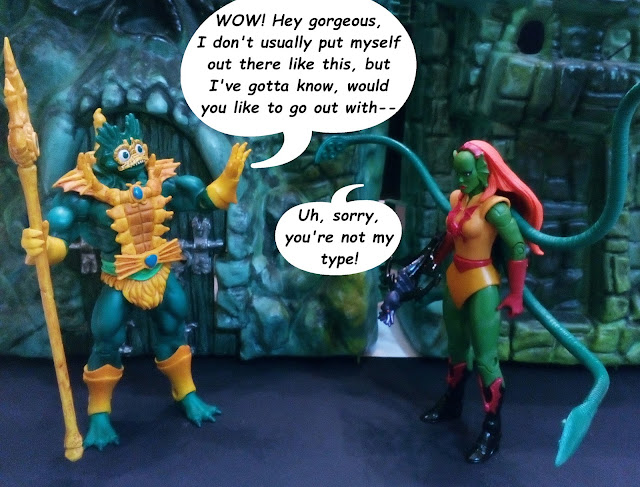 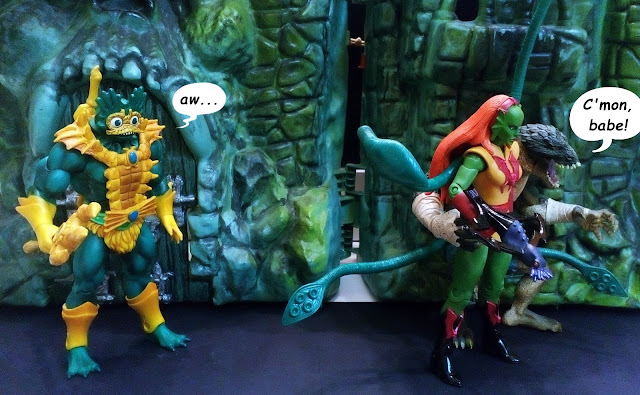 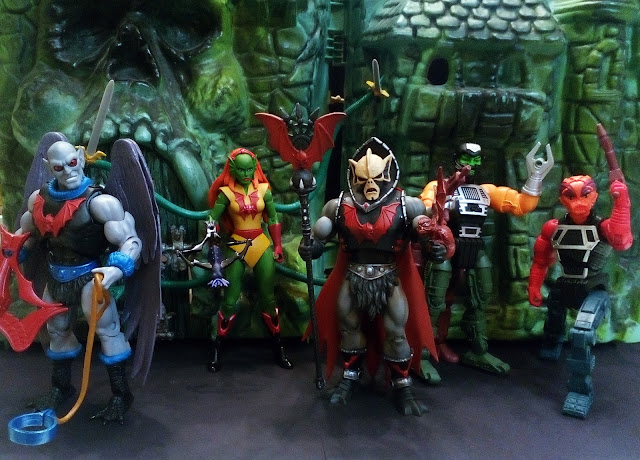