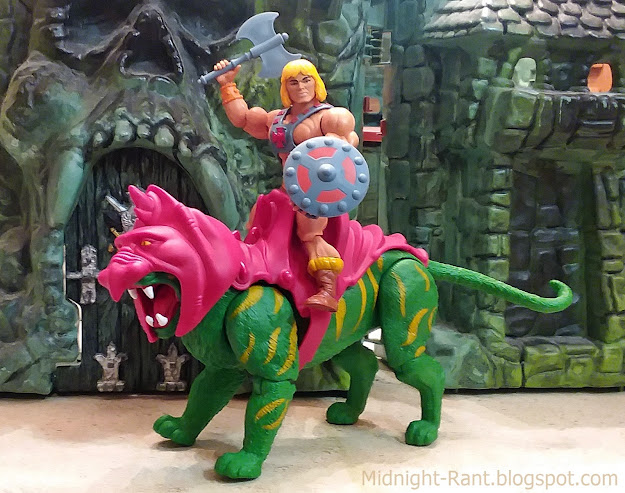 There are few certainties in life, and fewer still that are comforting. One thing we can always rely on: When a new Masters of the Universe line makes the scene, He-Man won't be expected to hoof it everywhere. Nope, he will have his old buddy Battle Cat! In the vintage line, Battle Cat-- or Big BC, as his friends call him-- quickly grew beyond his roots as a cheap reuse of an old mold from Mattel's earlier Big Jim and Tarzan lines to become one of the handful of absolutely essential characters in all of  MOTU, and one of the biggest pop culture icons of the '80s. When someone buys a He-Man figure, they also want Battle Cat to accompany him. The two are practically inseparable. And so it is with Mattel's new-ish Masters of the Universe Origins line! How does the newest iteration of the big green cat fare? Read on... 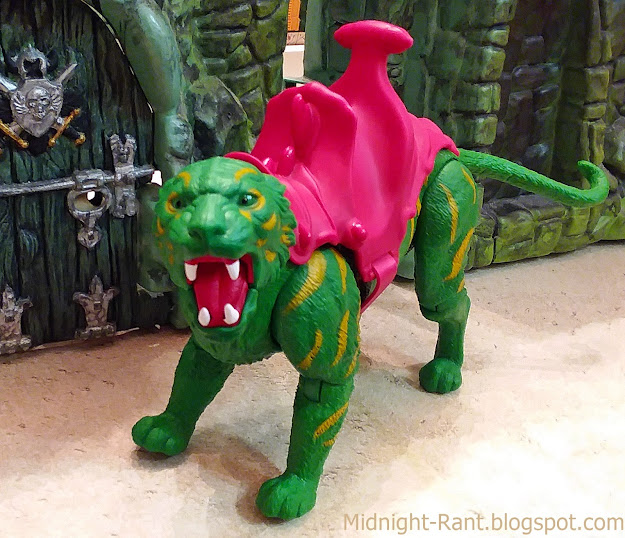 From the moment you see him on the shelf, Battle Cat benefits greatly from the presentation of this line. The vintage-inspired artwork is gorgeous, emulating the original art by Rudy Obrero, while still standing on its own two legs. There are numerous tiny details and Easter eggs for sharp-eyed viewers, and the overall effect is one that made me reluctant to open the damn thing. I'm not a MOC collector, so any package that makes me hesitant to rip into it is  a special thing indeed! As with the rest of the line, the sculpt is evocative of the vintage figure, but more sharply detailed. There's a great deal more fur texture sculpted, and the front rows of teeth between the canines are actually sculpted. It's not as detailed as the Classics version, but then, I don't think anyone was expecting it to be. That's not what the Origins line is aiming for. (Unfortunately, my vintage, 2002, and Classics Battle Cats are in storage, and thus unavailable for comparison shots.) 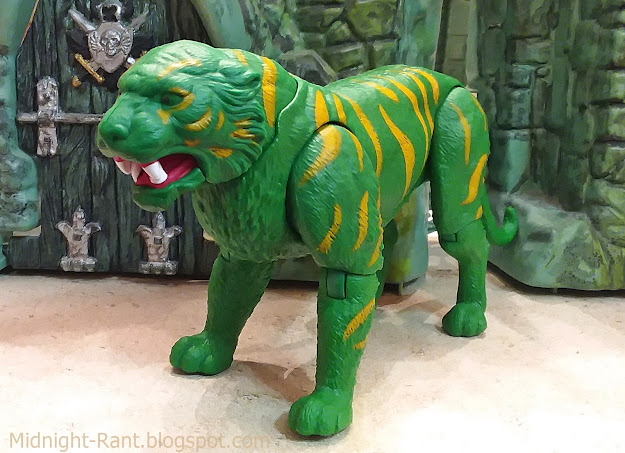 BC doesn't require much in the way of paint apps, but even so, what's present isn't all that it should be. The yellow stripes are mostly neat, but there are some gaps in areas where the underlying sculpted fur is a bit thicker than in others. This is most apparent on his shoulders. The tail is unpainted, as with most vintage BCs, but given this line's mission statement, I think it should have been striped like the BC prototype and very early production run. The eyes are left the same green as the head was molded in, but they did at least apply a nice gloss coat to give them a bit of a sheen. The rows of teeth between the canines were left unpainted. The body would also have greatly benefited from a light wash, but I'm not really expecting paint washes and the like from this line, so I won't hold that against them. The saddle and helmet also feature a few gloss coats on a few spots, such as the protruding horns. The helmet also features painted eyes, a first for a BC toy! They're too Filmation-y for my liking, but it's nice that they did it. (I always display my BC without the helmet, anyway.) 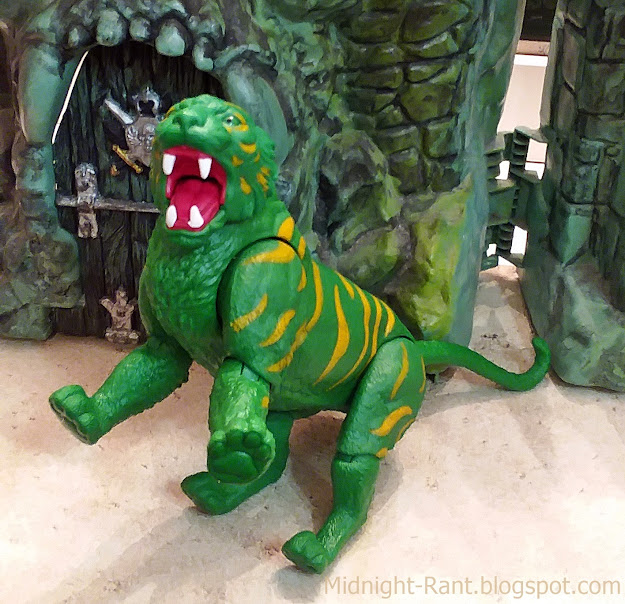 BC's articulation is a mixed bag. He fares far better than his counterparts from the vintage and 2002 lines, but falls short of the Classics version. He's so close to having everything he needs that it's frustrating. BC has a swivel hinge joint at the tail and knees, swivels at the hips with very limited outward movement, a hinged jaw, and a wonderful ball-jointed head. The lack of ankle articulation of any kind really hurts him, as it limits the poses he can strike, and makes many of the poses he can hold look unnatural. You can't even get him into the iconic pose his vintage counterpart was sculpted in! The range of motion for the head is fantastic, though. That one POA alone is so well implemented that it can add much expressiveness to the figure. The tail helps with this, as well. It's a good thing, since he's pretty much destined to just stand with his legs straight underneath him. BC's only accessories are his saddle and helmet, and that's really all he needs. They fit in place well and are easy to remove, and He-Man (or any of the figures released so far) fits into the saddle perfectly. 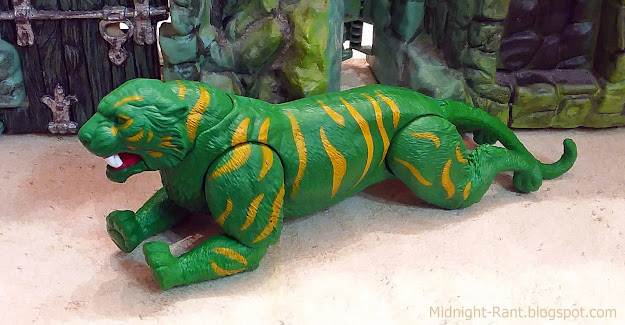 I admit that I was on the fence about buying this version of Battle Cat at first, and I considered digging out my Classics BC to use, instead. That may actually be the best option for anyone who has a Classics BC, but as he is very expensive on the secondary market, this Origins version is the best bet for anyone who doesn't already own one. His articulation is the big sticking point, but it's still a vast improvement over the vintage and 2002 versions. I don't regret buying him, and I like him quite a bit more than this summation probably makes it sound. I really do wish Mattel had implemented those ankle hinges, though, as that would have made a huge difference. However, let's face it: If you're collecting this line, you've gotta have a Battle Cat, and unless you already own another one, or have lots of disposable income, this is the only game in town. It's not a bad purchase, and kids will certainly care less about the limited articulation than we adult collectors do, but it's a shame that some questionable work from the design team holds it back. That's it for this week, but be sure to ride your over-sized jungle cat back next week for more! Until then, happy hunting, and stay safe out there! 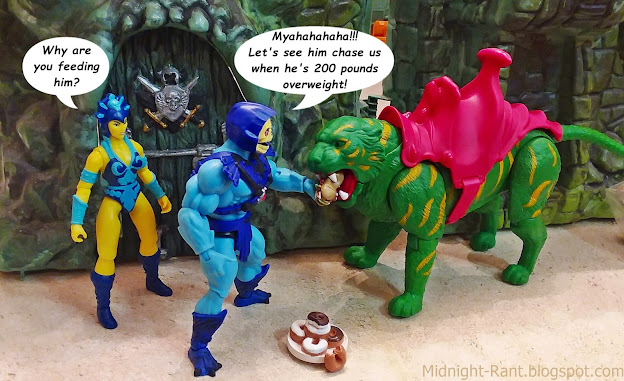