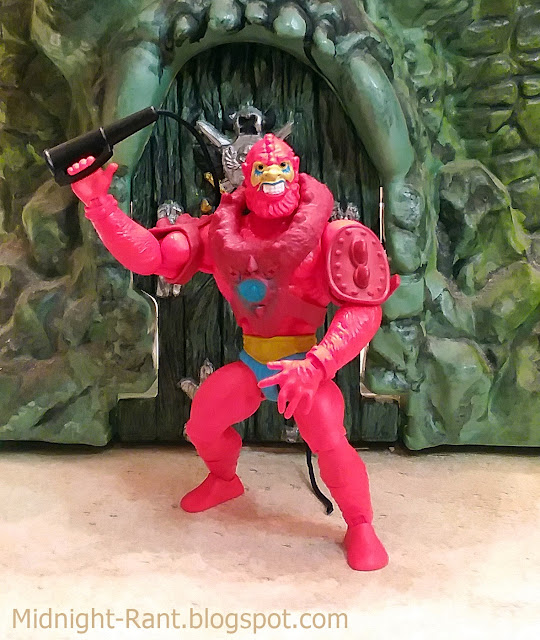 It's still slim pickings for Mattel's MOTU Origins line around here as I type this, but I did get lucky and find remnants of the four figure assortment case, which seems to be the most elusive of all the Origins stock at the moment. After seeing that the largest Walmart in town had received one of those cases via Brickseek, I headed over and saw a lone Beast Man hanging among several Skeletor and He-Man figures. Amazed (but thankful) that someone had apparently bought a set of the figures but left Skeletor's right-hand henchman behind, I head toward the checkout. 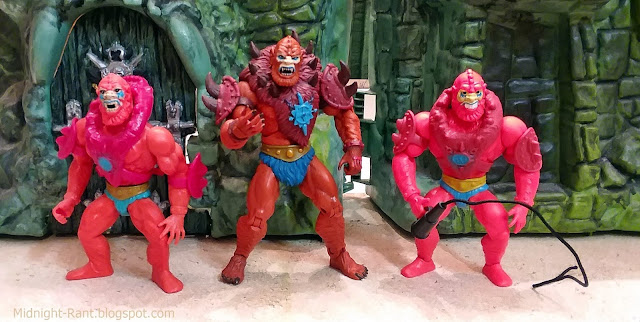 Beast Man is perhaps the closest of all the wave one MOTU Origins figures to his vintage counterpart. He uses the furry beast body, of course, making him unique among the figures released so far. As with the other figures, this is a recreation of the '80s parts, with slightly sharper detailing. These sharper details are perhaps most obvious when looking at the back of the figure's right hand, where the spiky weapon is plainly visible, as opposed to the very soft sculpt on the original. Unlike most of the wave, Beast Man's head is damn near exactly the same as the original, with only his gritted teeth really setting it apart. As you can see in the photos, the two heads are remarkably close. My one gripe with the figure's sculpt is the smooth little baby booties he seems to have slipped over his feet. Though this is a vintage-inspired line, they have been improving details and tweaking designs a bit in general, and this is an area where I think such a change would been most welcome. Give Beast Man some damn feet with claws on them, for Grodd's sake! I can't hold this against the designers too much, since these figures mostly adhere pretty closely to the vintage versions, but I do think they made a mistake in sticking so closely to the original figure here. 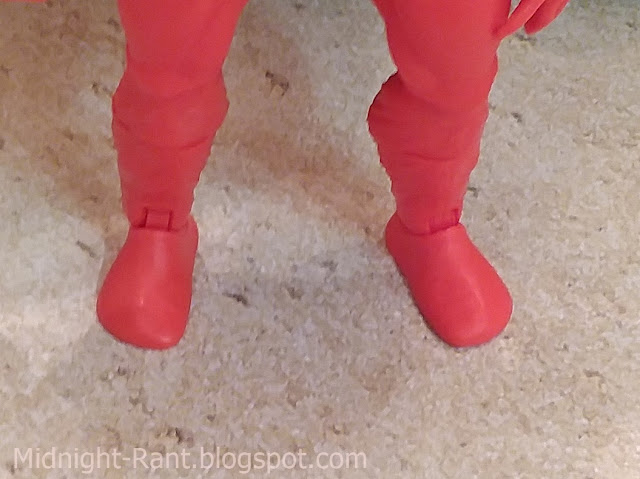 Most of the paint work is pretty neat, with some particularly crisp work on the face. Another casualty of aping (heheh) the original figure too closely is the paint work on the figure's armor, however. The designers opted to simply have the airbrushed blue blob sort of on and around the medallion, and call it done. This sort of  slapdash paint work was acceptable back in the day, but again, despite this being a vintage homage line, it just feels cheap and lazy here. I didn't expect them to paint every tiny sculpted detail on the armor, but I don't think it's unreasonable to at least expect the medallion to be neatly painted blue without the paint application spraying all around it just because the old toy did it that way. I really feel that this line can pay homage to the beloved classic line quite adequately while still improving little things like this, and it feels like a missed opportunity when they don't. 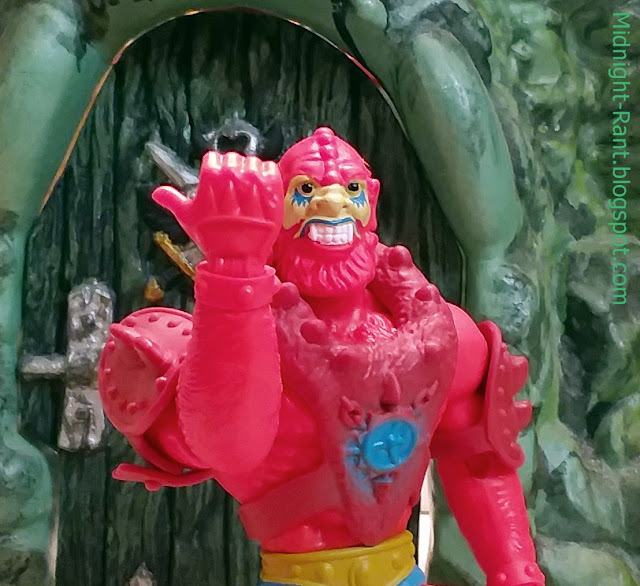 Beast Man sports the line's standard articulation, with a ball-jointed head, swivels at the waist and calves, and swivel & hinge shoulders, elbows, wrists, hips, knees, and ankles. I don't have anything new to say here, but I continue to like this articulation model quite a bit, and the parts-swapping feature continues to work well and add a lot of fun to the figures. Beast Man's lone accessory is his whip. Broken record time! The vintage figure had a whip with a handle that was too large for the figure to hold because it was borrowed from Mattel's larger-scaled Big Jim line. This necessitated the figure holding it be the little hand guard, rather than the handle itself. Again, I feel this is something that could have been "fixed" with the Origins line, but the line's designers apparently felt otherwise. This isn't a deal breaker or anything, but it is annoying. The standard wave one minicomic is also included, and as I stated in my reviews for the other wave one figures, it's short and underwhelming, but it's  awesome to be getting an honest-to-god minicomic with these figures. Hopefully they'll improve in the future. 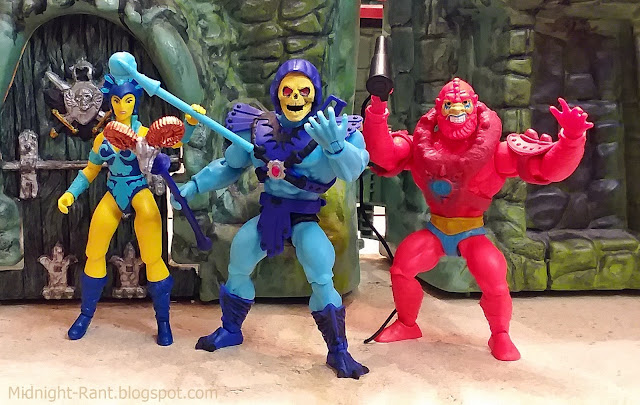 While I feel this figure suffers more than some of the others from being too beholden to the vintage figure, it's still a great toy overall. Honestly, even with the handful of issues I have with it right out of the package, it's one of my favorites from this wave! It's just a shame that it isn't all that it could have been, but those factors won't be issues for everyone. Either way, Beast Man is still Skeletor's number one whipping boy, and an absolutely essential character to any incarnation of the MOTU mythos, so anyone who's interested in this line will no doubt be grabbing one of these. Warts and all, this is a good figure, and a fantastic vintage-style representation of the character. Even if they didn't quite knock it out of the park, it's great that Mattel has done a very solid job with such a crucial character. That's all for today, but be sure to swing back by next week for more! Man-at-Arms still eludes me, so next week's review will focus on something a bit... larger. Until then, happy hunting, and stay safe out there!

Here's a look at Beast Man after some repainting and drybrushing. A decent paint wash really makes you appreciate the detail in this sculpt! 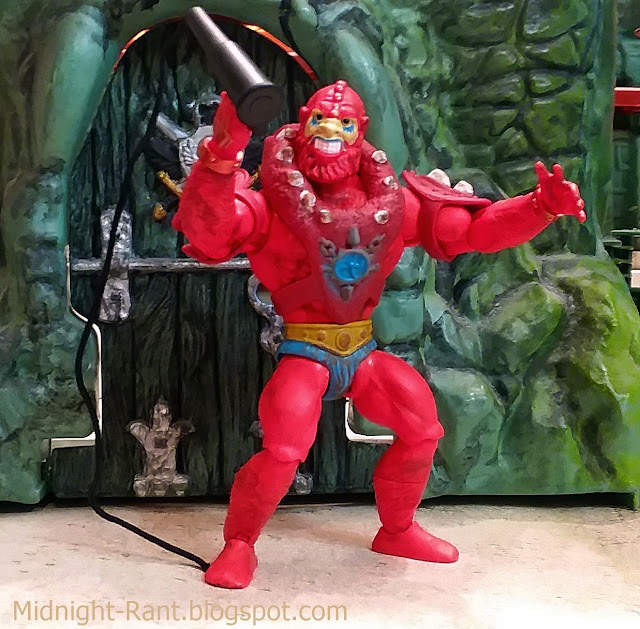