Thoughts on the Masters of the Universe Origins Castle Grayskull leak

Within the last 24 hours, a photo of what appears to be the MOTU Origins Castle Grayskull has been making the rounds online. It was apparently found in the files of a German retailer's website, promptly uploaded to PlanetEternia.de, and from there, it quickly spread across the 'net. Note that while this seems legit, it is not official, and even it is is real, we don't know how close to this image the final product will be. 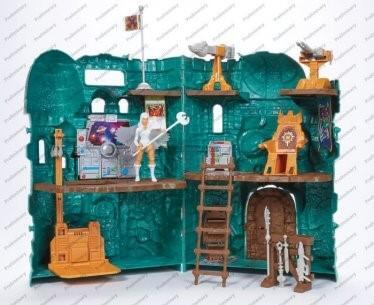 There's a lot to unpack here. At first glance, it bears a strong overall resemblance to the vintage Grayskull, which should come as no surprise to anyone. That said, there are enough differences to make it distinct and interesting in its own right. One of the first things I noticed is the brown jawbridge. This seems an odd decision, as the vintage castle looked fine with it molded in the same green as the rest of the castle. I had no problem believing there are green trees on Eternia! While the brown chosen might make the door look better from the outside, the jawbridge itself suffers. Hopefully this is something that will change before this version of Grayskull, if it is indeed legitimate, enters production. If not, it can be repainted, so it's really not a huge deal. The weapons rack is present, though it has fewer weapons included than any previous version of Grayskull. The ladder is much wider, and actually looks functional for the figures. It's a bit difficult to make out, but behind the ladder, we can see what appears to be the torture rack that was scrapped from the final version of the vintage Grayksull! That is a very interesting inclusion, if that is what it actually turns out to be. The dungeon sticker appears to be on the floor underneath it. Finishing off the first floor is the elevator, looking very much like its vintage counterpart.

On the second floor, we have a sculpted version of the viewscreen, which was represented by a cardboard cutout in the vintage castle. The Sorceress appears in her Temple of Darkness minicomic color scheme, presumably as a pack-in figure. I'm glad to see her in the white costume, as that has long been my preferred version of her. The banners hanging on the wall look very similar to those included in the MOTU Classics Grayskull, and may well be reused from it. The control console, like the viewscreen, is sculpted, instead of a simple cardboard insert. The space suit, sadly, is not present. The throne looks very much like the vintage version. The sticker over the trapdoor appears to be on the floor, and we can only assume that it works as the vintage version did. On the castle parapets we have the laser cannon, flag, and, oddly enough, the combat trainer. I like the addition of a third platform here.

A few more general observations: The overall shell seems much more shallow than the vintage version, though it's difficult to tell for sure. There also doesn't appear to be an actual hinge, but just a seam in the plastic that allows the castle to open and close. If this photo is legit, let's hope that this is a prototype version, and that the final toy will have actual hinges. I was hoping for a Grayskull that looked far more like the early Mark Taylor prototype and Alfredo Alcala's rendering of it, but that doesn't seem to be what we're getting here, though the torture rack is a nice (and surprising!) homage to it. The inclusion of the "chess piece" on top of the facade and the ledge on the right side would go a long way toward achieving a middle ground between vintage toy and that prototype version. While I'm glad to see the ToD Sorceress, I would prefer a pack-in figure to be a character we're not likely to get as a single-packed figure, like a King Grayskull statue figure, Castle Grayskull Man, or an actual figure version of the space suit that seems to have been nixed altogether. The prototype version of the throne would be nice, as well. Extending the top ledge all the way across would also increase play and display space. I'd also love to get the Spirit of Grayskull piece that was slated for inclusion with the MOTU Classics Grayskull at one point!

While there's quite a bit we can see in this low-res photo, it's important to keep in mind what we cannot deduce. Most obviously, we can't see the front of the castle. Here's hoping it has some of the more ghoulish teeth and detailing seen in the vintage Taylor prototype and Alcala renderings, but we really won't know until more photos surface. This castle isn't perfect, but I do dig it. It's different enough from previous Grayskulls to have its own charm and identity, and should hold plenty of appeal to any kids who have bought into the Origins line. (Kids are the primary audience for this line, after all. Adult collectors have a tendency to forget that the toy world doesn't revolve around them!) According to a Target listing found earlier this year, the castle may retail for $75. Given what we see here, that seems about right. For now, we'll just have to wait until more details surface, hopefully in an official capacity from Mattel itself. That's it for today, but feel free to share your thoughts in the comments, and trek on back in two days for another MOTU Origins review. Until then, happy hunting, and stay safe out there!

Posted by Waylon Piercy at 5:41 PM