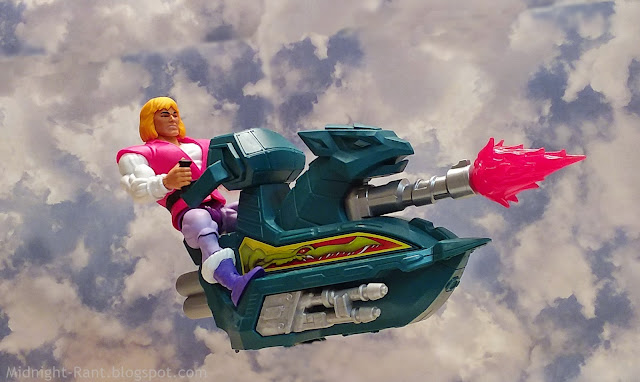 One of the major drawbacks collectors have had to accept in recent years is that most toylines simply don't get vehicles and playsets. Sure, you'll see plenty for lines that tie in to big movies and TV shows, but outside of that, they are largely a thing of the past. As toy aisles continue to shrink, shelf space becomes ever more valuable, and larger items with a larger footprint on the shelf must belong to a line with strong enough sales to justify that space if retailers are expected to stock it. With all that in mind, the presence of something like the subject of today's review is a clear sign of the confidence Mattel has in its new-ish Master of the Universe Origins line. As part of the iconic Battle Ram, the Sky Sled is one of the most quintessential MOTU vehicles. Love him or hate him, Prince Adam is one of the property's most recognizable characters. Did Mattel do them justice with this latest iteration? Read on... 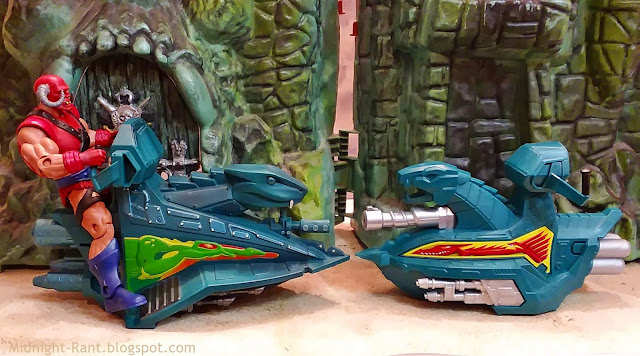 As with Battle Cat, I was absolutely floored by the beautiful packaging. Like the rest of the line, it recreates the look and feel of the vintage toys, and includes many details and homages to the vintage art. In fact, I was so taken by it that I overlooked this until I made it home and was about to open the thing. 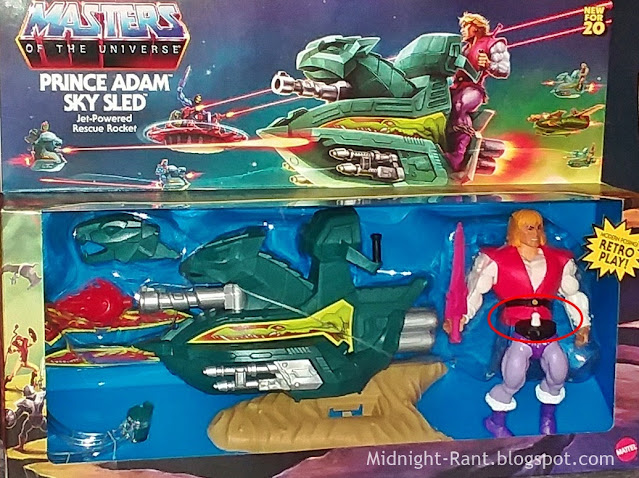 Apparently Adam got too crazy on the dance floor and dislocated his pelvis. Good thing these figures snap right back together! Once I popped Achy Breaky Adam's waist back together, I put him through the usual joint checks and other tests a new figure must endure. His sculpt is the same as He-Man's, of course, though cast and painted in different colors. The color scheme mostly matches the vintage figure, but the vest is a bright pink instead of the maroon of the '80s version. Another difference is the choice of materials, as this figure's vest is made of a pliable plastic, rather than the soft goods of its vintage counterpart. The vest is glued shut, but can be slid off if you pop off the arms and legs. (Of course, you could always just cut it open, too!) A gloss coat over the bracers would have helped set them apart from the "shirt", but other than that, I'm satisfied with the figure's paint apps. Adam sports the line's standard articulation, with a ball-jointed head, swivels at the waist and boot tops, and swivel & hinge shoulders, elbows, wrists, hips, knees, and ankles. As usual, most of these POAs pop apart for easy mixing & matching with other figures, though I recommend heating the elbows, knees, and ankles before trying to pop them apart. Adam's lone accessory is his sword, cast in a pink to match his vest. Interestingly, it's a full sword, rather than the half sword his alter ego is saddled with. It uses the Alcala look, but the handle is too thick for the figure to comfortably hold. You have to force it into his hand, and then it falls out a minute or two later. It's an odd design oversight, to say the least. 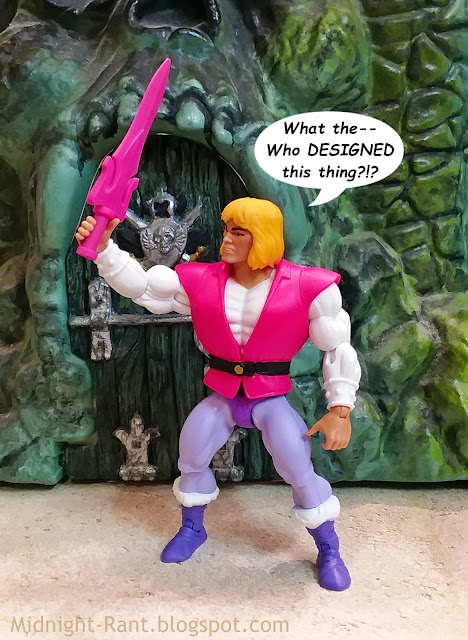 The Sky Sled itself follows the general design of the vintage toy, with some embellishments taken from the vintage package art. There's a greater emphasis on firepower with this version, as the cannons are much larger than those on any previous version of this vehicle. The cannons and rear thrusters are cast in a silvery plastic, while the rest of the sled is cast in the familiar dark blue. The front cannon swivels side to side, and any of the figures released so far can fit into the seat to pilot the sled. The gargoyle head and side panels can be removed and swapped out for alternate "evil" versions, allowing for some easy customization. Completing the package is a flight stand with some khaki colored terrain as its base. The stand pops into place easily, and removes with a little force. The sled can tilt and swivel while the base is attached, allowing for a nice range of poses. (Note that the stand does not work with the MOTU Classics vehicles, as the plug is a different size.) Rounding out the accessories is a very cool laser blast effect that can plug into the front cannon. It's cast in a translucent plastic, stays in place easily, and looks cool doing it! 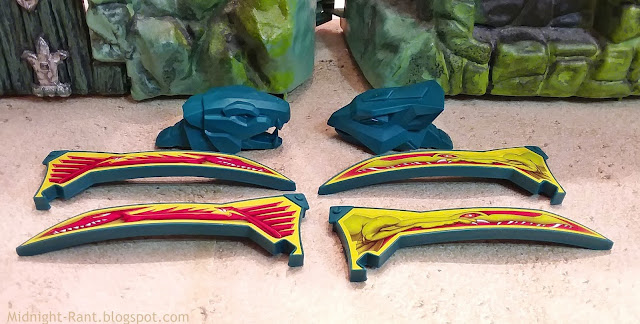 The Sky Sled is a fantastic choice for the line's first vehicle, and Mattel has done a great job with it. They took a vehicle that was sure to sell anyway, and really went the extra mile and included those swappable parts to basically make it two vehicles in one! The oversized cannons may bother some, but in my view, they're just big enough without becoming comical. (They'll look even better once I get around to customizing this thing and painting in the sculpted details!) The Sky Sled itself is small enough that it would be a tough sell at $30, even packed with a figure, but the flight stand and swappable parts give it that little extra oomph it needs to justify that price. Many collectors will already want to army build the Sky Sled, and the ability to make an "evil" version of it only increases that temptation! That brings us to the major drawback of this set: the pack-in figure. Adam is a decent enough figure, but for a vehicle like this that encourages multiple purchases, the included figure really should have been an army builder. Swapping Adam out for a palace guard would have made this a damn near perfect set. As it is, a lot of collectors are gonna wind up with a few extra Adams lying around gathering dust! Since Adam is a top-tier character that could easily sell on his own as a single-packed figure, his inclusion here is even more mystifying. Still, whatever the reasoning behind it, Adam is the figure we got. This is a great set that is well worth buying, but the inclusion of a unique character makes army building a much tougher sell. And I still want the rest of the Battle Ram soon, you hear me, Mattel? That's it for today, but be sure to hack and slash your way back here next week for another review! Until then, happy hunting, and stay safe out there! 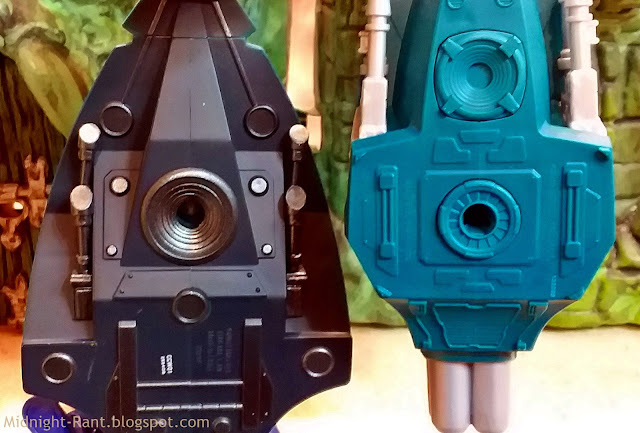