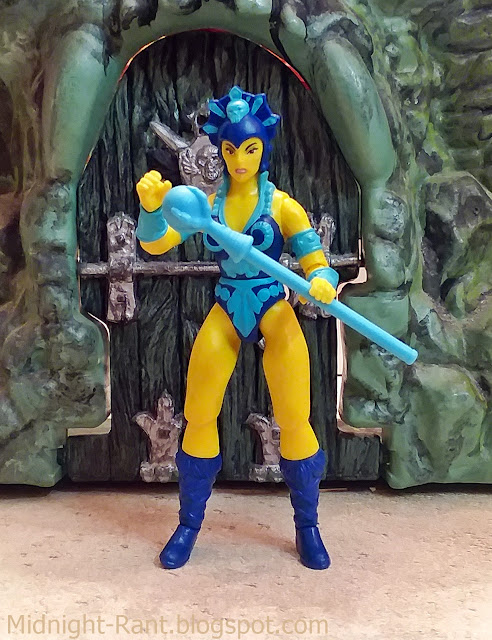 Despite managing to order Evil-Lyn from Walmart's supremely uncooperative website a couple of weeks ago, it took six days before it was actually shipped, so I actually had my store find He-Man in-hand first. Hence, this figure that I ordered a week prior is going up a week after him. Such are the hoops we jump through when a hot new toyline launches! Evil-Lyn's inclusion in the initial launch of the MOTU Origins line is an example of how Mattel is (thankfully) mixing things up a bit with the figure assortments, rather than rolling them out in more or less the same order as the vintage line. (Scare Glow in wave two, Ninjor in wave three, and Clamp Champ in the debut wave of the deluxe line are even better examples!) This is a very good thing in my mind, as it adds a bit of anticipation to reveals, instead of us all knowing who is coming next. It also means that those of us who count some of the later series figures among our favorites might not have to wait years to get Origins versions of them! (Seriously, we're already getting the Champ in a few short months! I am all over that!) It's particularly nice in this case, as Evil-Lyn is one of the core characters in the mythos, and it would really kinda suck if we had to wade through multiple waves before we got to her. 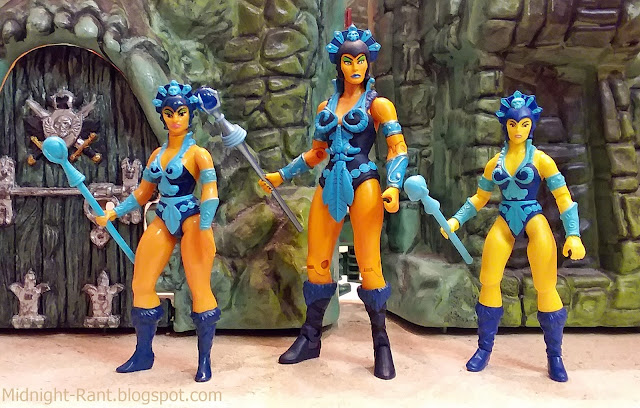 As with Teela, with whom Evil-Lyn shares most of her parts, the sculpt is more or less a more sharply detailed recreation of its vintage counterpart, with a few differences. The weird left hand that both of the main MOTU ladies were saddled with always looked to me like they were being introduced to people at a fancy dinner party who were lining up to kiss their hands. Thankfully, this has been replaced with a functional grasping hand, adding to posing options far more than a recreation of the old "How do you do?" hand would have. Like her snake armored counterpart, Evil-Lyn also lacks the vintage figure's fuller Frazetta-style thunder thighs. Childhood me would be very disappointed! 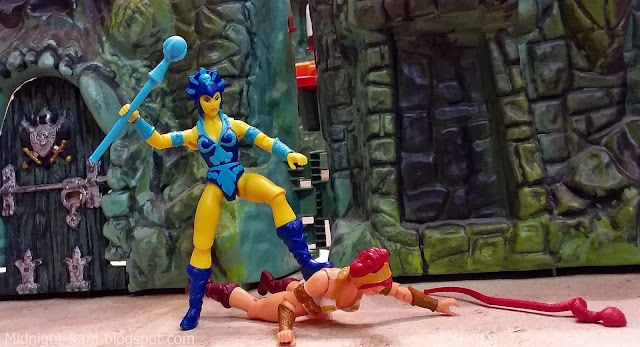 The biggest departure, as with most of these figures, is with the head. Evil-Lyn has a snarling expression that, while very specific to certain situations, does suit the character. The tiny teeth are individually sculpted, which surprised me a bit. The face does look noticeably different from the vintage figure, and it only kind of looks like this is the same person. It's not a bad sculpt, but it is different. As seen in the photo below, my figure's helmet wasn't put on straight during assembly, so the damn thing is crooked. It's not noticeable unless you're looking at her straight on, but it annoys me enough that a bit of surgery will be required. Hopefully the glue they use at the factory isn't too strong! Unfortunately, based on the many photos I've seen of other people's figures, the crooked helmet seems to be a widespread issue. 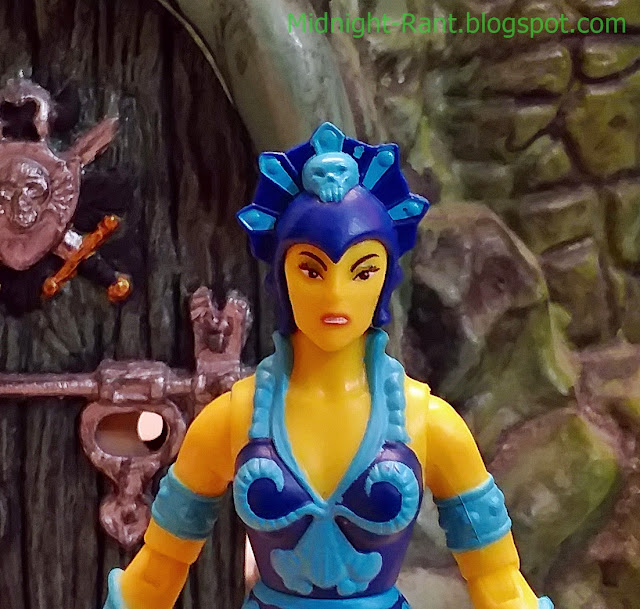 The paint apps are pretty neat for the most part, but my figure has a little blob of light blue between two of the points on her crooked helmet. This figure got beaten all up by the QC stick! The paint apps on the face are responsible in large part for how different this head sculpt looks from the original, as the lipstick and eye shadow applications are far more restrained. The eye shadow, in fact, is barely there at all! I'm still on the fence about whether or not to add some myself. This is not necessarily a bad thing, but it is something to be aware of. 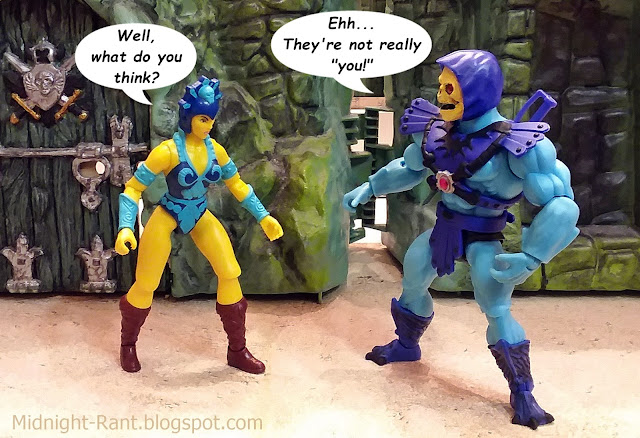 Evil-Lyn sports the line's standard articulation, with a ball jointed head, swivels at the waist and boot tops, and swivel & hinge shoulders, elbows, wrists, hips, knees, and ankles. The joints move easily and hold poses well, and they pop apart and back on without much trouble. I do recommend heading the elbows, knees, and ankles before popping them out, as they're much smaller and tighter on the ladies. It's a great articulation model that I like quite a bit, though the knees stand out much more on the ladies. Evil-Lyn falls far short of the others in the accessory department, with only her magical orb staff. This is simply cast in light blue, and it does not glow in the dark as many of the vintage ones did. This really does feel like we're being shorted here, as there are numerous sensible options that could have been included to prevent the accessories from being so light. How about a set of swappable "spell casting" hands? What about the dagger that's been a standard inclusion since the character's 2002 iteration? Or a swappable head without the helmet? Or maybe a removable cape, since the character is often featured with one? With so many viable options, it really does feel like Mattel cheaped out here. The standard wave one minicomic is also included, and (broken record time!) it remains short and underwhelming, but it's cool as hell to get an honest-to-god minicomic with a figure in this day and age! Hopefully their quality will improve in the future. 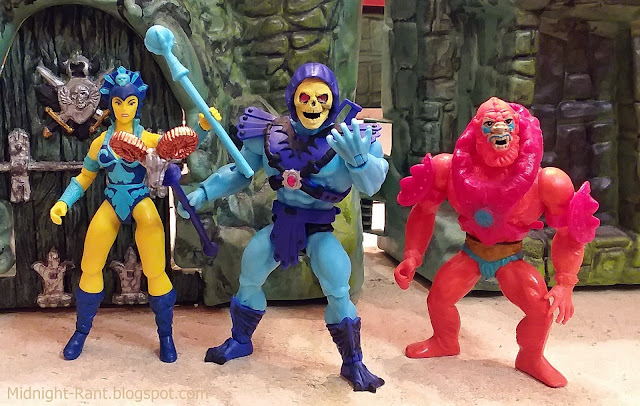 As an essential character and a fan-favorite, Evil-Lyn is a sought-after figure for pretty much anyone who is collecting this line. Despite a few flaws, this is a good plastic rendition of the character, but unlike most of the wave one figures, I consider this one as a bit of a starting point. We need a better head, and we need more accessories. By all means, grab her if you can, but be prepared that the figure feels a little light compared to the rest of those released so far. She's good, but there's plenty of room for improvement. Below is a shot of the figure after a bit of repainting, mostly applying some metallic blue dry brushing to the armored parts of her outfit, and painting the orb on her staff. I'm not done with her yet, as I still have to remove the factory-applied blob on her helmet and paint in the boot detailing, but it's already looking better! That's all for this week, but swing on back next week for a look at another Origins figure! Until, then, happy hunting, and stay safe out there! 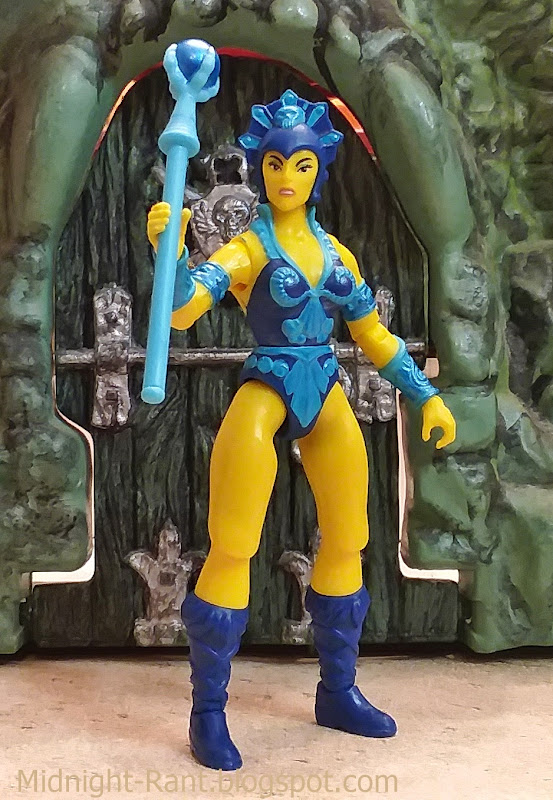 And here's a look at what happens when Evil-Lyn tries to sneak out for a girl's night out! ;) 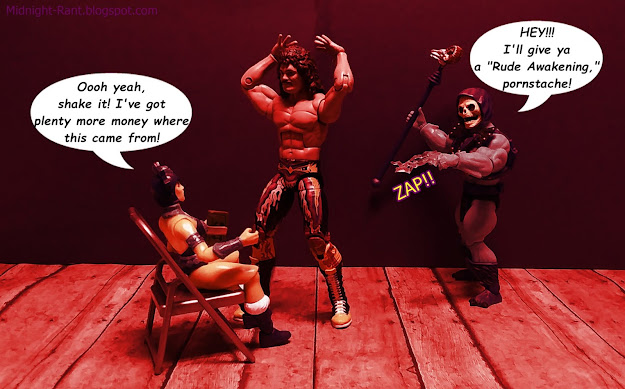