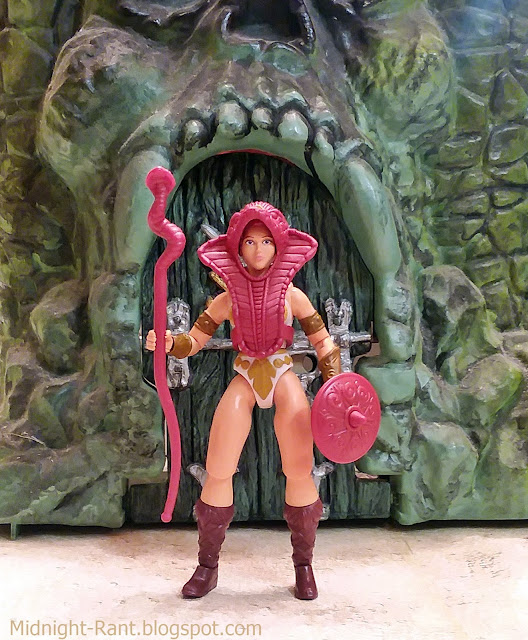 Mattel's long-awaited Masters of the Universe Origins line, teased with last year's sadly unobtainable SDCC exclusive, is finally here! Well, sort of. Figures have been randomly popping up for order on Walmart's website, only to disappear within seconds as scalper bots wipe them out so they can resell the figures at a horrendous markup. Bless their hearts. The upshot is that these figures have been damn hard to acquire for anyone who refuses to feed the-- how can I put this politely? Oh yes: greedy pricks who employ bots to wipe the site's inventory clean. I managed to beat the odds a couple of days ago and snag my first figure in the line! I was hoping for Skeletor to be my first figure in this iteration of my beloved MOTU, but as Teela was the second or third figure I got from the vintage line back when I was a spry three year-old, it's cool that she wound up being the first. (Really, though, don't give in and pay scalper prices for these. They'll only become easier to find in the coming weeks, and if people stop playing the scalpers' game, they'll have to stop their greedy hoard & resell tactics.) 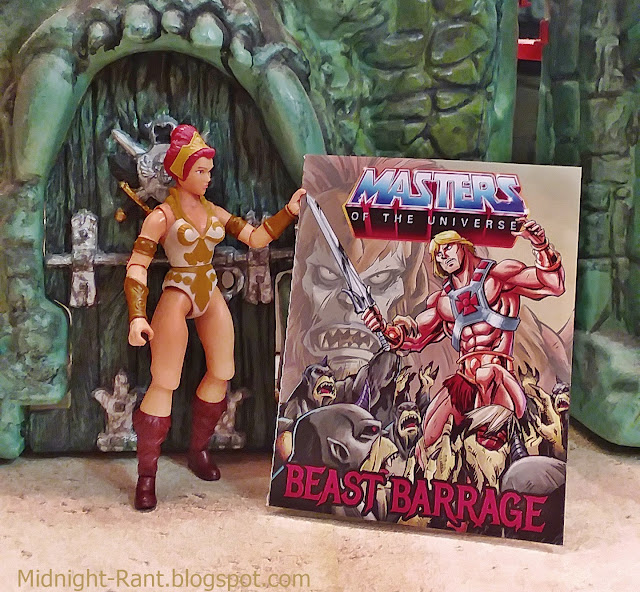 Mattel has nailed the vintage feel of the packaging, featuring the classic red rocks explosion and vintage MOTU logo. The cardback art, cross sell, and even the fonts used are evocative of that classic line. Even at a glance, there is no doubt what this line's purpose is. It's also downright awesome to have an honest-to-god minicomic included, even though the contents are very short and underwhelming. I'm glad to have it, but if this is the best they can do, I think I'd prefer a reprint of a vintage minicomic instead. Hopefully they'll improve in future waves. 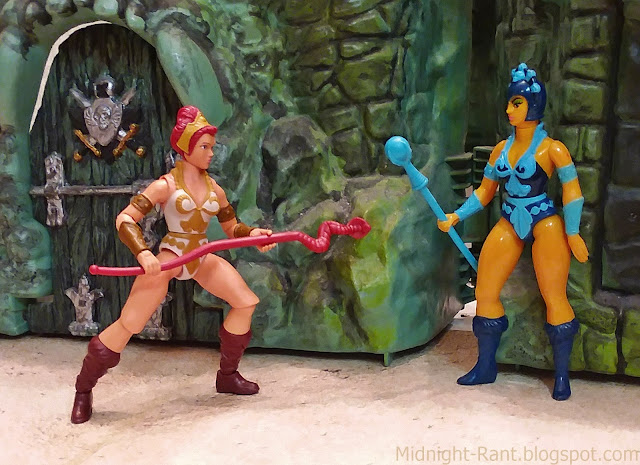 The sculpt is very well done, capturing the look of the vintage figure without it feeling dated, though it is worth noting that this figure is actually less detailed than the vintage version in some areas. the head displays some Filmation influence, and while that is very far from my preferred iteration of MOTU, it integrates very nicely with the rest of the figure. My only issue with the sculpt is the design of the thighs, which are very slim and not at all like the MOTU female figures we're used to. Teela needs those Frazetta-style thunder thighs, Mattel! There's also a large copyright stamp that takes up the lower half of the figure's back. This could have been placed in a better spot, and really doesn't need to be obnoxiously large. The figure scales perfectly with the vintage line, and is pretty much the exact same size as her vintage counterpart. 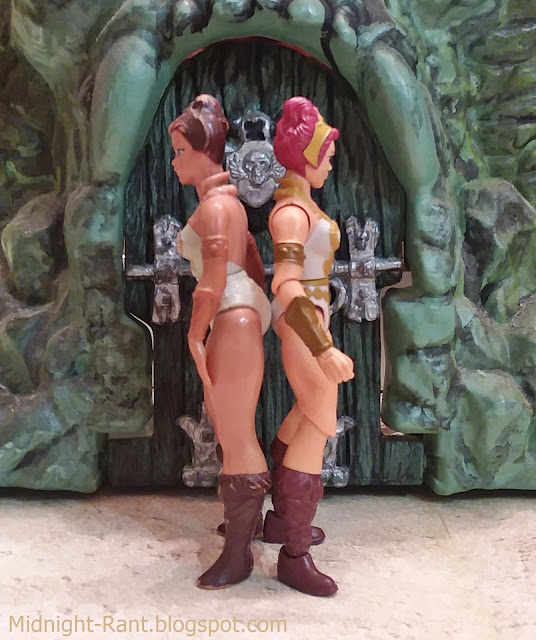 Teela includes her requisite accessories: Snake armor, snake staff, and shield. The armor is flexible and easy to take on and off, and the hands hold the staff very well. The shield has a tendency to fall out of the figure's hands, making one miss the little clips the vintage version had. The accessories are devoid of paint apps, and are simply cast in red. Paint apps on the figure itself are quite good, especially on the face. I do wish the gold was metallic, as it looks rather dull as is, but that's an easy thing to fix. 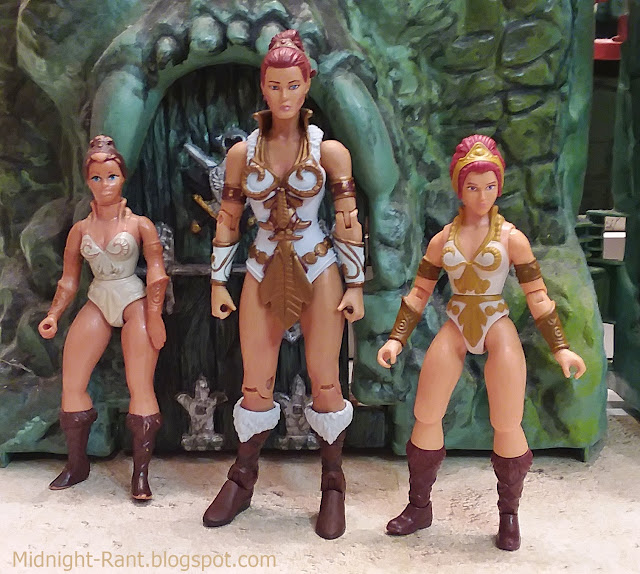 Teela sports the standard MOTUO articulation, with swivel & hinge shoulders, elbows, wrists, hips, knees, and ankles, swivels at the waist and boot tops, and a ball-jointed head. All the articulation works properly, with a large range of motion. None of the joints are loose, and the figure holds poses well. This could change with time, of course, given lots of reposing and swapping of parts. Speaking of part swapping, most of the pieces pop off and back on easily, yet don't feel as if they may fall off once you have them back in place. The hips are the only POA that requires a bit of work to remove and reattach, but it still seems within reasonable bounds. A special thing to note that might not be so obvious: The sculpt of the boots look correct no matter which way they're turned. Why am I mentioning that here? If you rotate the boot, then rotate the foot to face the appropriate direction, you have a sideways hinge for the feet, allowing for stability in deep poses that require it. (This can be sen in the pic with Evil-Lyn above.) This is a POA Mattel has rarely seemed to get right, even when they bothered to include it at all, so it's nice to see that it's implemented here, even if it requires a bit of finagling. 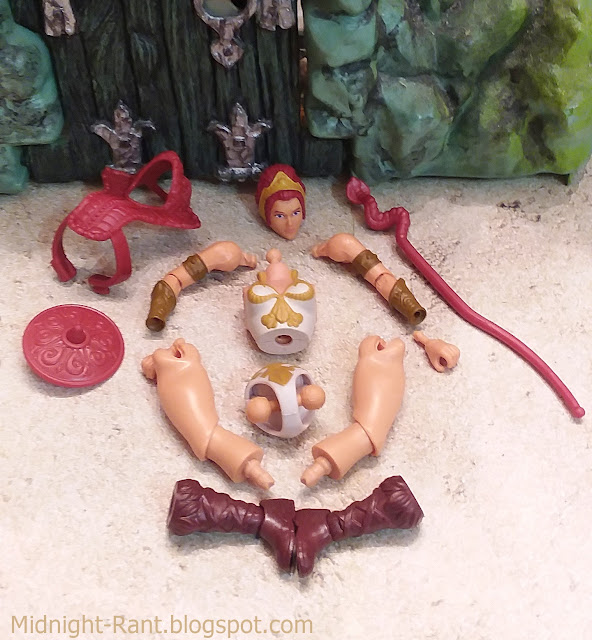 There have been some mixed reactions to this line, with some lashing out at it simply because it's not MOTU Classics. While I sympathize, and I have a sizable MOTUC collection that I love, I am all-in with this line. Classics had its day, enjoying an astonishing twelve-year run that delivered far beyond what any of us dared hope. Origins is a different beast, and I feel it's a damn good step to take as part of Mattel's initiative to bring MOTU to the forefront of popular culture once more. The feeling I had holding this figure in my hands within the beautiful vintage package art, is indescribable. For a few fleeting moments, I felt like an excited, hopeful child again. I can't imagine how it will feel when I finally see dozens of these hanging on the pegs in a store. Mattel seems to be going all-in on leveraging the deep connections so many of their customers have to the MOTU brand, and while that may sound rather cynical, it feels anything but. Hopefully today's children will feel something of that connection as well, and MOTU will soar to new heights. Mattel has something very special on its hands, if it can only get the product out there so the people who want it can buy it. MOTU Classics will always have a special place in my heart, but I'm damn happy that we have MOTU Origins, too. You can look forward to plenty more reviews of this line as I manage to get more of the figures. Until then, take care, stay safe, and happy hunting! 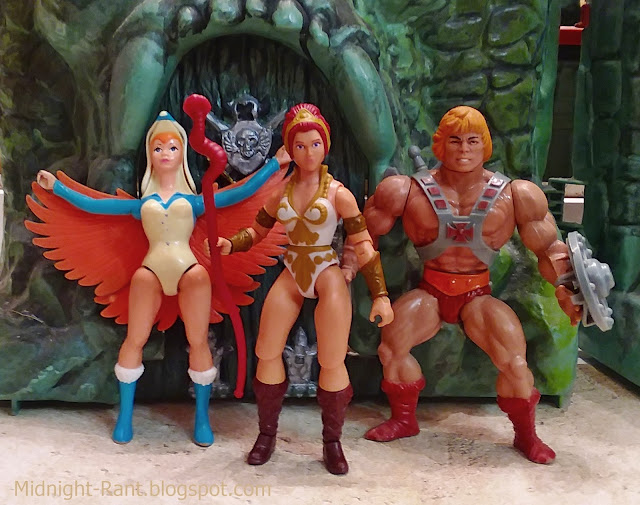 Here's a look at this figure after some customizing. The bronze dry brushing looks even cooler than I expected! 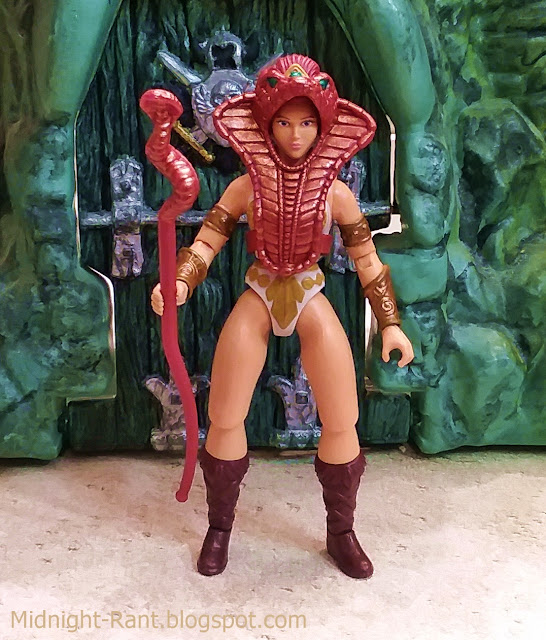