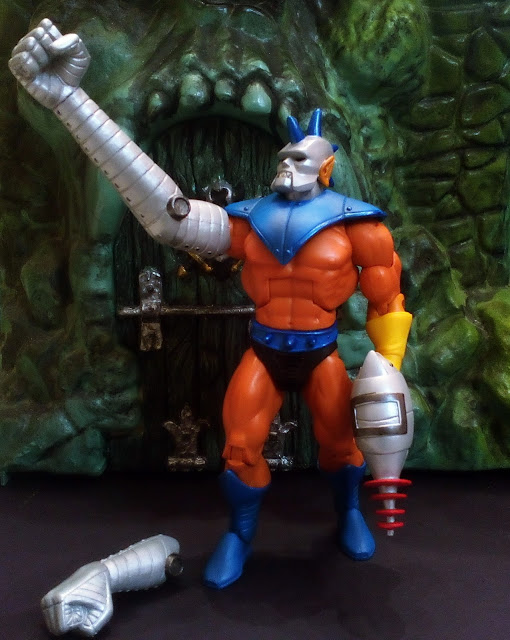 The beloved Filmation MOTU animated show featured quite a few original characters over the course of its run, and many of us who watched it as a child expected that we would get figures of some of these characters eventually. For whatever reason, that rarely happened; as it stands, Orko and the Sorceress were the only Filmation characters and designs that made an appearance in the vintage MOTU toyline. While the Sorceress was cool-- never mind that I never had a hope of finding her figure in a store when I was kid-- my childhood self would have traded Orko for literally anyone else from the show. As a kid who loved the villains, Strongarm, or Strong-Or, as Mattel has named this figure, was near the top of my want list. (Along with another Filmation villain that we'll be looking at in a couple of weeks!) For many MOTUC collectors, this figure is long overdue. His bio on the package gives him a backstory linking him to Queen Elmora, featured in the episode "She-Demon of Phantos," in which Strongarm was fairly prominent. This is pretty cool, as it actually gives him a strong motivation for his actions against Elmora in that episode. For all of the issues with the MOTUC bios, they do include some good ideas from time to time. 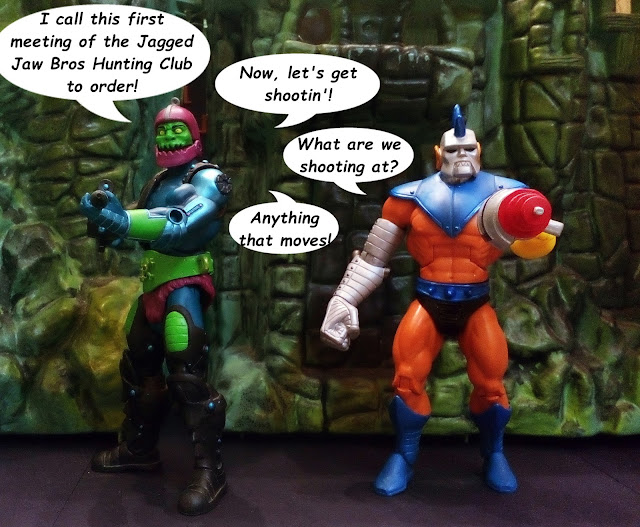 The sculpt by the Four Horsemen has translated the animated character's look into the MOTUC style quite well. All of the expected design elements are here, with an adequate amount of detail added to make him mesh with the rest of the line. There is some nice detailing on the armored parts, with rivets and spikes throughout. The head sculpt makes him look pretty vicious, though it's a shame about the rounded spikes. With their prominent placement, they really stand out, and their severe roundness lends the figure a bit of a Fisher Price feel that is very much out of place in this line. While Strongarm has the new parts he really needs to shine as a figure, he does reuse the standard torso, which means we have yet another figure whose costume features nipples and a navel. (Insert obligatory Joel Schumacher Batman reference here.) Overall, however, the sculpt definitely meets the standard set for this line. 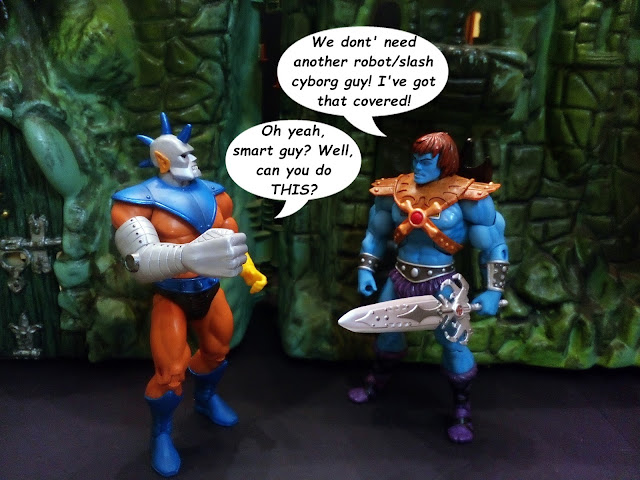 Strongarm features mostly standard articulation for the line, with one difference. His right elbow features a swivel/hinge design, rather than the usual hinge. Apart from that, he has the usual hinged left elbow, knees, ankles, and torso, ball joints at head, shoulders, and hips, and cuts at the biceps, wrists, thighs, boot tops, and waist. The paint apps on my figure are pretty neat for the most part, but there is some noticeable slop here and there, most notably on the ears. Speaking of those ears, they're bright orange! They look rather goofy sticking out from the metal head, but it's accurate to the source material. Strongarm comes with two cool accessories. One is an extension for his metal arm, which pops on and off easily at the elbow joint. Thanks to the articulation model used for these figures, finding a stable pose even with the arm extension isn't difficult. His other accessory is a neat ray gun that I know I've seen in the cartoon at some point, but with a gun to my head I couldn't tell you which episode it featured in. It's always cool to get gear like this with the figures, even if they don't really go with the figure they're packaged with! 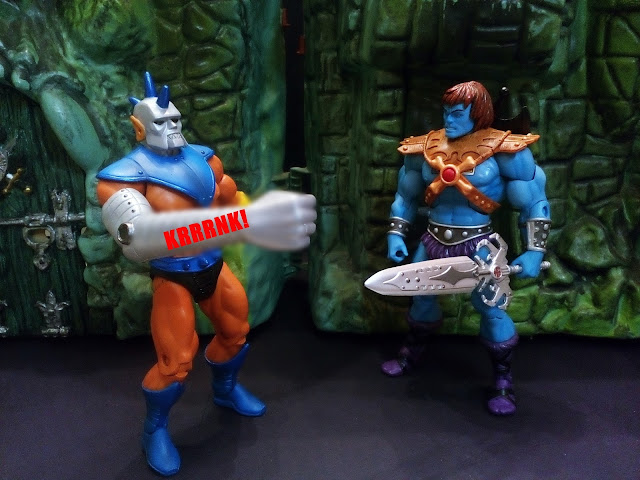 While he was never one of Skeletor's core group of henchmen, Strongarm fleshes out the ranks nicely, and Filmation fans will find him essential. It certainly doesn't hurt that he also has a cool look  with a giant fist that would make Fisto envious, and a nice, eye-catching color scheme. (As you can see in the photos, I couldn't help pairing him up with Faker, as his color scheme gives him a sort of reverse-Faker vibe.) I wouldn't rank him in the upper echelon of MOTUC figures, but Strongarm is a solid middle-of-the-pack figure, and I'm happy to add him to my shelf. that's all for today, but keep scrolling down for more photos, and I'll see you next week! 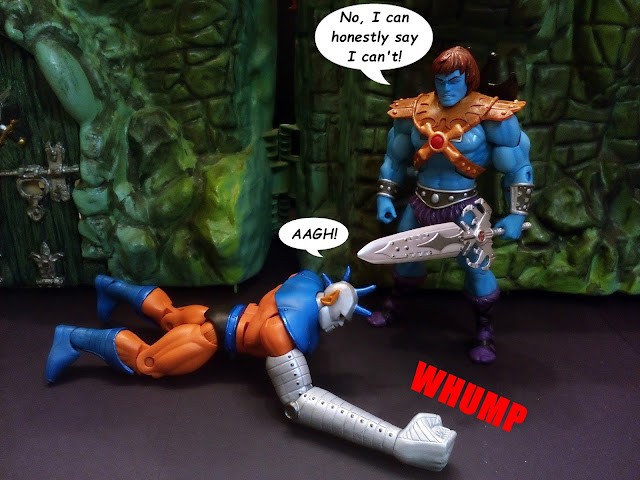 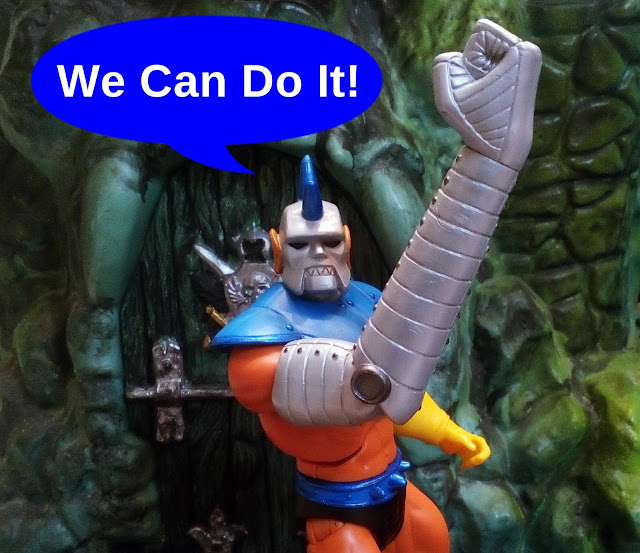 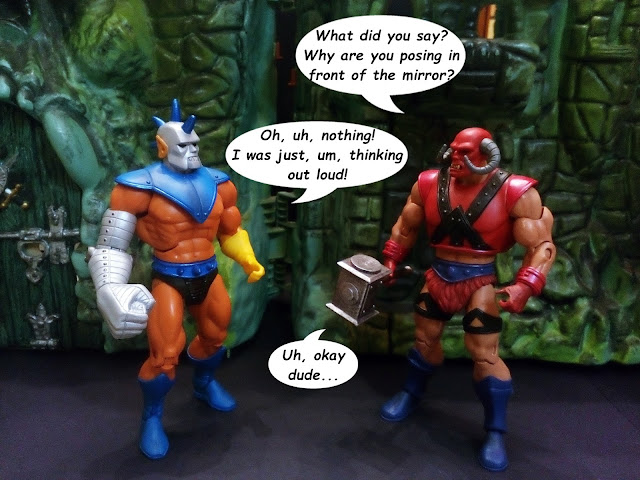