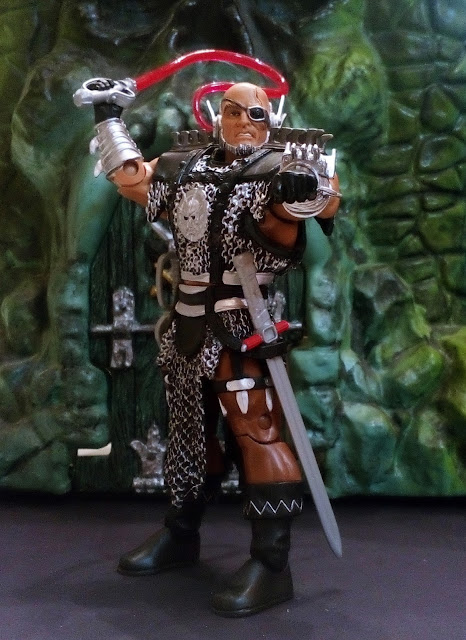 We're tackling another character from the MOTU movie today! As I mentioned in Saurod's review, the movie was a pretty big disappointment to me as a child. I even went so far as to call Blade "a poor man's Tri-Klops." My feelings about the movie, and the villains it introduced, have softened over the years. I now consider Blade a pretty cool character. He's still no Tri-Klops, but he's much cooler than the other notable character who's known by the same name! ;) As an apparently normal human-type character, he really stands out among all the beasts and monsters in Skeletor's crew. (I'll mention here that actor Anthony de Longis, who portrayed Blade in the movie, did some great work promoting MOTUC subs for the year that Blade was to be produced. It's well worth checking out his video if you haven't seen it!) 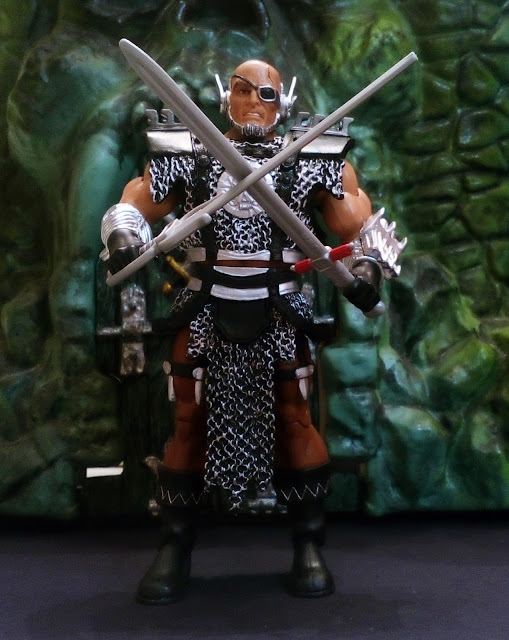 The Four Horsemen always do great work with their sculpts, but occasionally a figure comes along that is a true standout, where they really just knock it out of the park. Blade is such a figure. This sculpt simply kills! Many of the parts are reused, of course, but there is a lot of new tooling here, and the detailing on all of these new pieces is exceptional. The face is one of the best in the entire line, with a facial expression that has plenty of personality, and a strong likeness to the actor. Unfortunately, the metal "wings" on the sides of the figure's head are made of a very soft rubbery plastic, and are already beginning to wilt. That aside, the sculpting on the rest of the figure is just as great. Every link of the chain mail is lovingly sculpted, and the bracers and wrist-mounted launcher are nicely detailed. The only plain-ish parts are the legs and boots, but those are accurate to the source material. Blade does suffer a bit from the "fat armor" syndrome, which is a shame. It makes the figure look bulkier than he really should, but it doesn't throw off his look too much. There is a small gap between the top and lower sections of armor at the waist that is pretty annoying, but I'm honestly not sure how that could have been avoided in any practical way.The armor could have been done all as one long piece, but that would interfere with the articulation far too much. 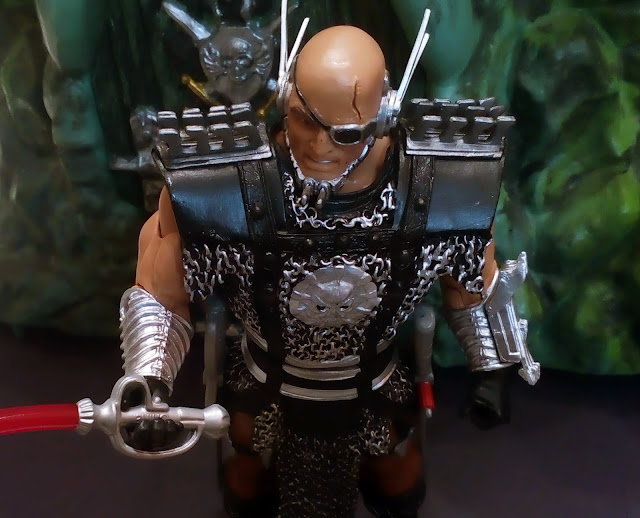 Blade's articulation is standard for the MOTUC line, with ball joints at the head, shoulders, and hips, joints at the torso, elbows, knees, ankles, and wrists, and swivels at the thighs, wrists, and waist. The armor interferes a bit with the torso hinge's range of motion, of course. Blade's accessories include two swords, one based on the swords seen in the movie, the other based on the vintage toy's, and his laser whip. The whip has a handle that, while movie-accurate, is pretty damn tough to get into his hand. (See the photo above.) Now that I've removed it during the course of taking photos for this review, I doubt I'll ever bother putting back in his hand. Having two swords is cool, but it's a little annoying that they don't match. (It's also annoying that they each have "CHINA" molded into them in very obvious places, but that's apparently just something we have to live with on these figures.) Even with all the new tooling this figure has, I don't think two of each sword, so we could have a matching set of the sword of our choice, is too much to ask. The swords are almost completely unpainted, which gives them a rather cheap look that doesn't mesh with the rest of the figure. Apart from that, paint apps on the figure are good. The silver & black color scheme on the armor is source-accurate and eye-catching, and the paint apps on the face turned out quite well. My one gripe here is that the large chest emblem has a lot of sculpted detail that doesn't show up very well because of the light silver color it's molded in. A wash with black, or a darker shade of silver or gray, would have made this really pop. (That's an easy fix, though; I'll definitely be applying a wash myself.) 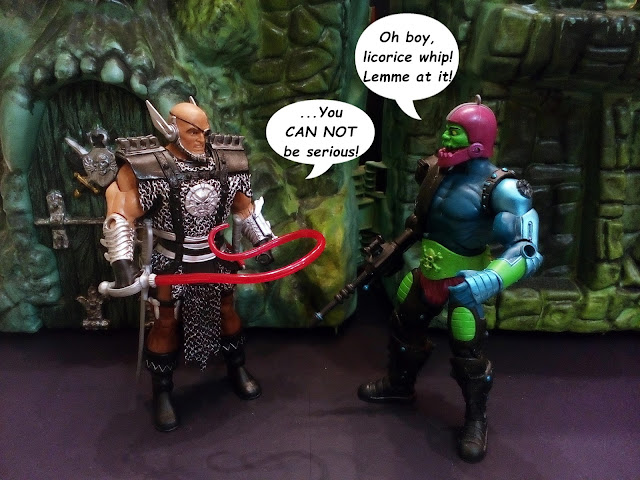 While he's far from an essential figure for any MOTU collection, Blade is a cool character and an awesome figure that will flesh out the villains' shelf very nicely. He pairs up well with Saurod, of course, but also looks at home among the numerous muscle-bound barbarians and beasts in the MOTUC line. Now that a "totally not based on the movie version, but it really sort of is" Karg figure is on the way, we'll soon be able to unite the MOTU movie villains on our shelves for the very first time! Now they just need to find a way to make a movie Skeletor happen! (I still say the "future Skeletor" from the last couple of issues of Marvel's MOTU series from the mid-'80s is close enough, since a straight-up movie version is off the table!) That's it for today. Scroll down for many more photos, and come on back next week! 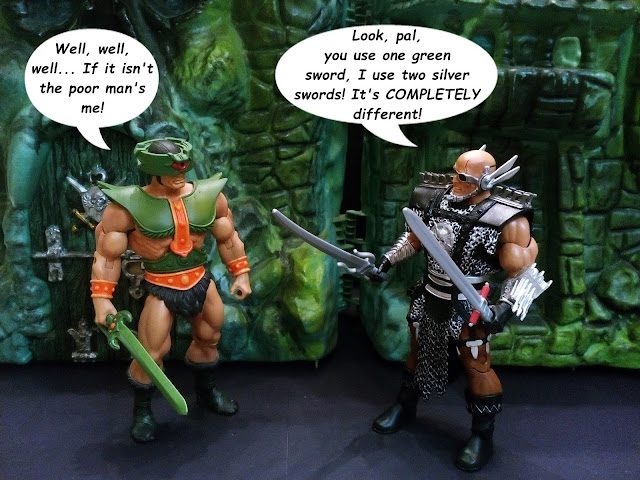 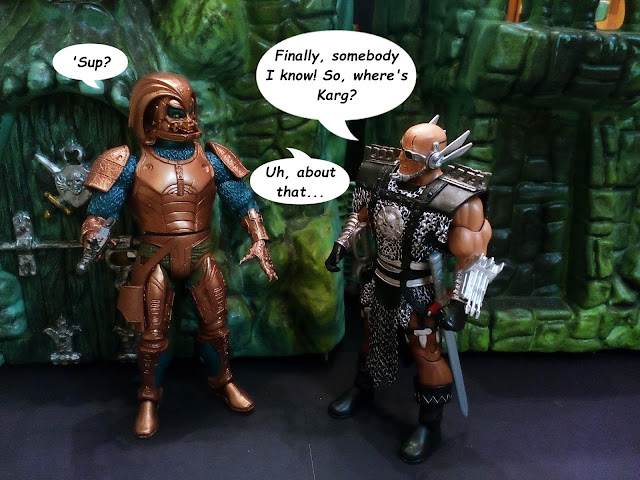 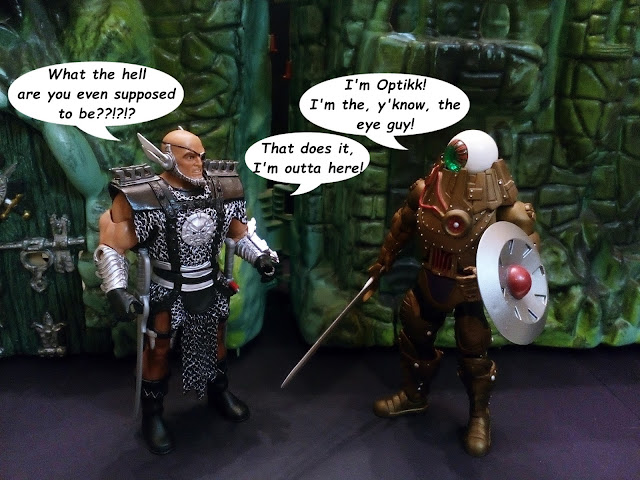 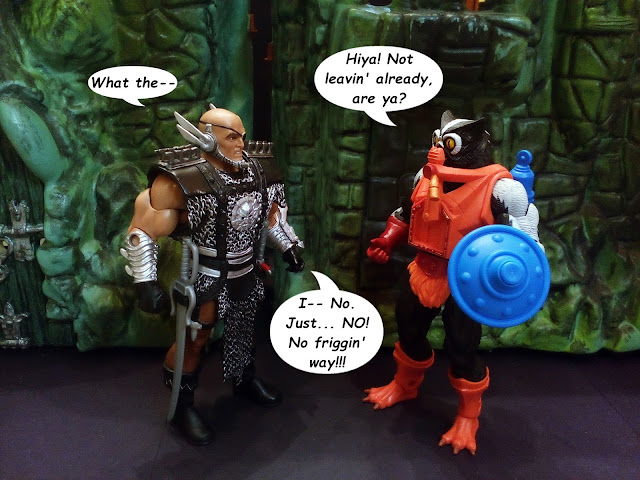 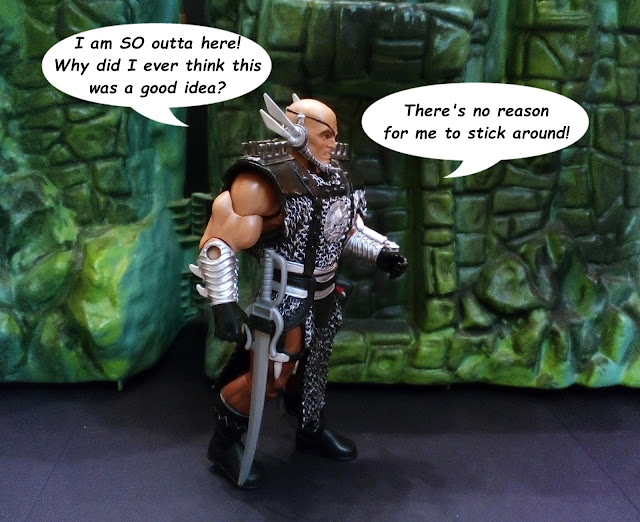 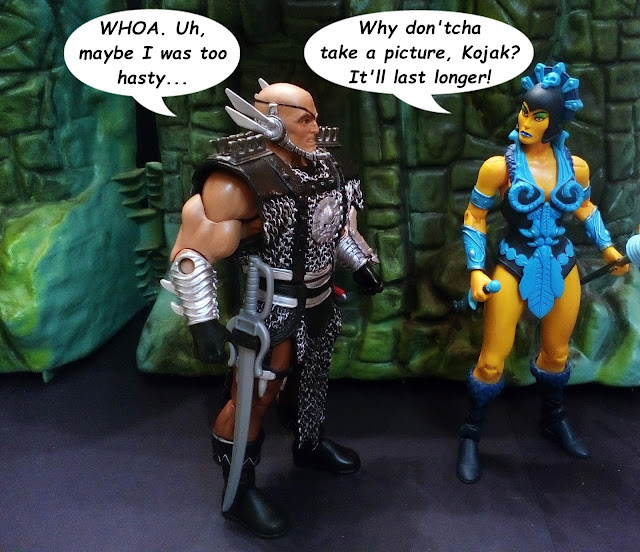