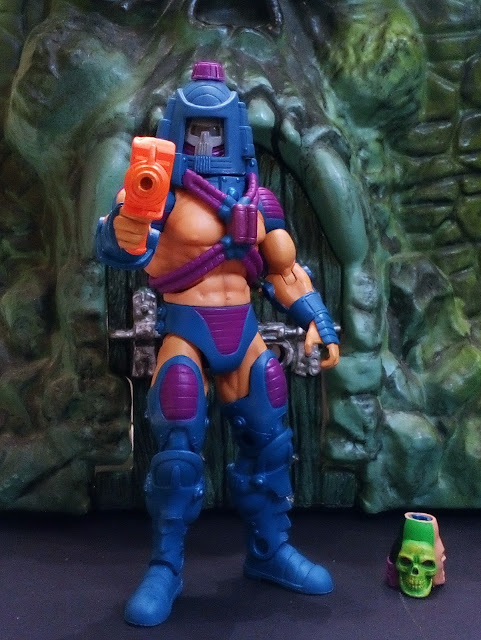 Today we're looking at one of the more controversial figures in the MOTUC line, the master of disguise (well, from the neck up, anyway) Man-E-Faces! MEF was an early release in the vintage MOTU line, debuting as part of the second wave in 1983. He's had several different origin stories, but my favorite is seen in the minicomic included with the figure, The Ordeal of Man-E-Faces. An acclaimed actor, MEF is conscripted by Skeletor, who transforms him into a monster. Skeletor commands him to kidnap Teela so he can sacrifice her to a demon! Seriously, it says so right there in the comic. 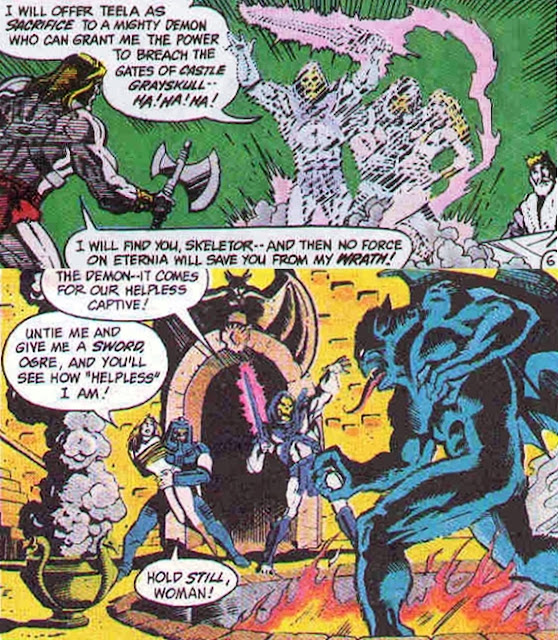 See? Can you imagine a toy company putting something like that in a comic aimed at little kids these days? Everyone would lose their damn minds! Anyway, the Goddess intervenes, freeing MEF from Skeletor's thrall. The two battle for control over MEF, changing him back and forth from man to monster, until finally, he transforms into a robot, unable to decide on a course of action. As Skeletor flees-- He-Man and Teela kicked the demon's ass during the magical tug-of-war-- the Goddess transforms MEF once more into a human. The heroes rejoice, but the Goddess notes to herself that the monster and robot personalities are now permanent parts of MEF, bound to emerge again in the future. 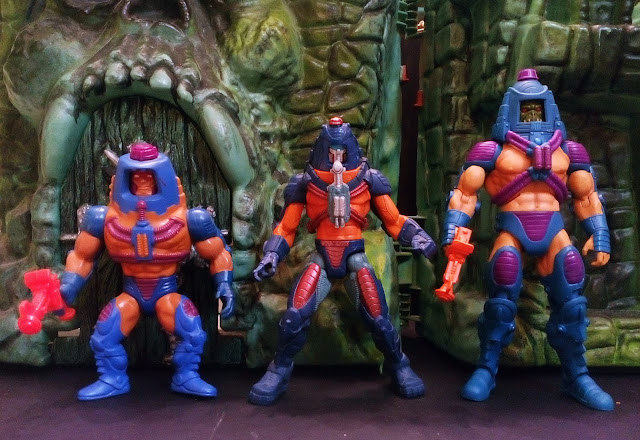 In some other media, most notably in the Filmation cartoon,  MEF could transform his face into literally anyone or anything. But as I said, the comic made the biggest impression on me, and my MOTU adventures often saw MEF struggling to control his monstrous side, with Skeletor always ready to exploit it. Each personality had specific traits; there was the standard super strength with the monster face, and the robot face gave him perfect aim with his weapon, along with super intelligence and a perfect memory. Sometimes I would turn the dial so that it was halfway between two faces to simulate MEF struggling between two different personalities, or another battle between Skeletor and the Goddess for control over him. MEF was a figure that offered plenty of rich play opportunities! 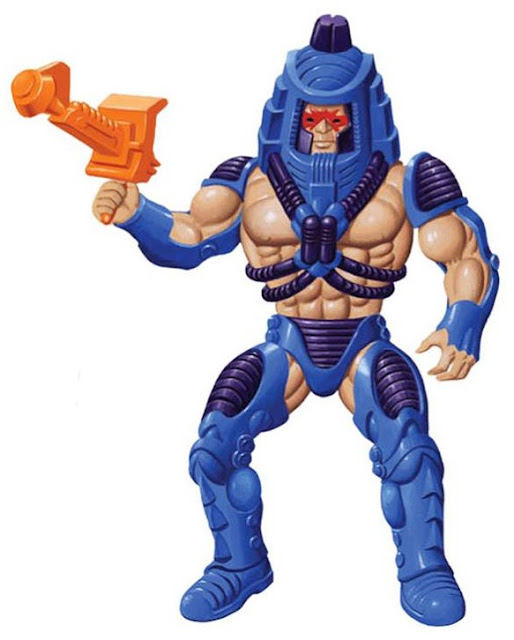 I first saw him on the cross-sell art on the backs of the packaging and minicomics, so I was quite surprised the first time I saw the actual figure in a store. (See the cross sell art above, courtesy of the always excellent Battle Ram blog!) I was disappointed by the altered color scheme, but the figure and his face-swapping gimmick was still cool enough that I wanted it anyway. I soon got over the color change, and MEF became one of my favorite MOTU figures and characters. He remains so to this day. He was one of my most-wanted figures in the rebooted 2002 line, and I remember the thrill of finding the chase version of the figure before its existence had even been announced. (It's one of the handful of figures I've actually kept in the package, as it makes for a cool display piece.) With that line's abundance of repaints, I kept hoping we'd get a "cardback colors" repaint of MEF, but it never happened. However, as the MOTUC line rolled along, it seemed inevitable that we would finally receive a figure of that version of the character, given the line's propensity for using the cross-sell art as the main source for the early characters. As it turned out, well... There was some indecision over which version to produce. A poll was held where fans could vote on whether MEF would use toy colors, cardback colors, or a mix of the two. The mix option won, giving us a figure that many were not happy with. 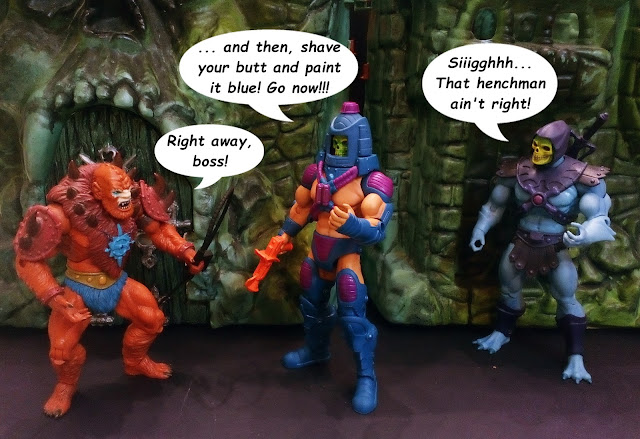 The sculpt is great, as usual for the Four Horsemen. The 4H clearly had the cardback version of the character in mind during the sculpting phase, as the details match it much more closely overall than the vintage figure. (Look to the shoulders and the helmet design as examples of this.) There's a lot of reuse, or course, mainly from Trap Jaw. This includes the open left hand, which irks some people. Personally, I like having some gesturing hands on some figures for variety, but it does limit what the figure can hold. The obvious solution is to include swappable hands, but Mattel never saw fit to do that. The new pieces are very well done, and the monster face, in particular, is a perfect update of the vintage figure. The human face, on the other hand, looks exactly like the cardback art. 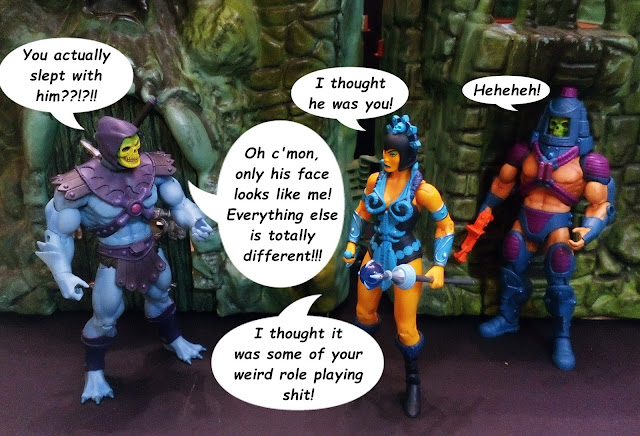 Returning to the color scheme, while it's not what I would have chosen, I quite like it. While I believe they should have just picked one over the other, and released a repaint in the other colors later, what we have is pretty nice. It's definitely a matter of individual preference, as there's nothing objectively bad about the color scheme chosen for the figure. The paint apps themselves are applied well overall, with only some tiny bits of slop in a few places. There's a glossy finish on the robot face's visor, and on the monster face's eyes. There are some nice metallic highlights here and there, including on the updated version of MEF's gun. On a figure with so few colors, these highlights help quite a bit. 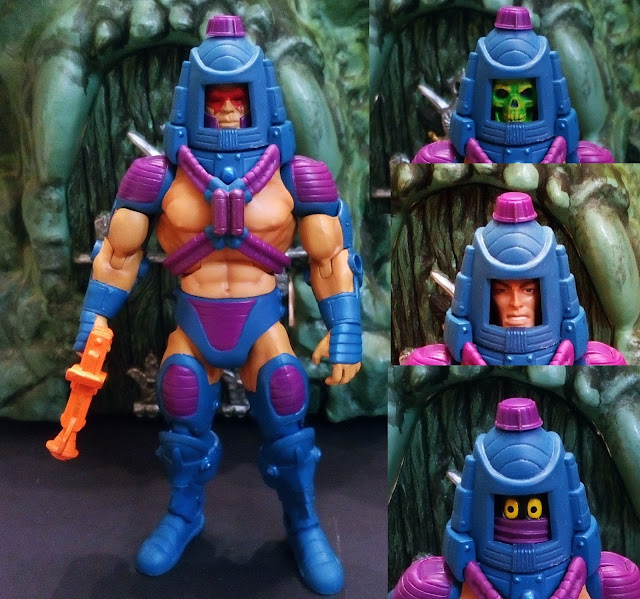 Articulation is mostly standard for the MOTUC line, at least from the neck down. MEF has the usual ball joints at the shoulders and hips, hinges at the elbows, knees, torso, and ankles, and swivels at the wrists, waist, thighs, and boot tops. Thanks to the face changing feature, MEF only has a swivel at the head, though the helmet itself swivels as well. The "action feature" works perfectly, and the faces switch easily and smoothly as you turn the knob on top of the figure's head. Accessories include the aforementioned gun, along with a "secret accessory," which turned out to be the first thing everyone guessed when it was announced: An additional head wheel with three more faces! Thanks to this, MEF can add Skeletor, He-Man, and Orko to his repertoire. These extra faces are all well-done, although they kinda went nuts with the green on the Skeletor face. I immediately tried fitting other heads into the helmet, but as you can see below, not many fit properly. Most male heads, such as Bow's, are too large, and most female heads, such as Despara's, are too small. Still, it's fun to mess around with. 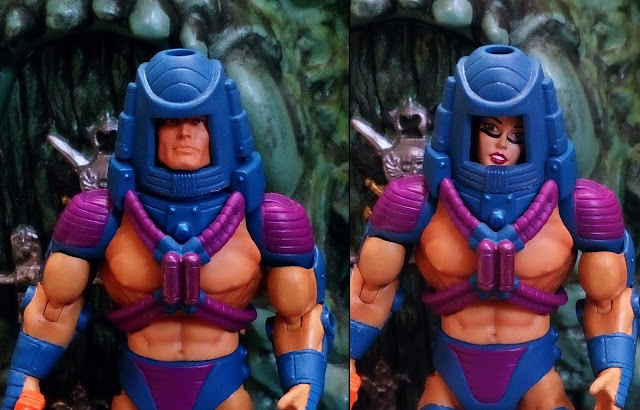 As one of the A-list heroic characters, MEF is essential to any MOTUC collection, so it's good that the figure is executed so well. The mixed color scheme may be an issue for some collectors, but this guy is simply too important a part of the MOTU mythos to be left out! I'm honestly pretty surprised that Mattel never released any repaints of the figure, and sadly, that lack of reissues has resulted in MEF commanding a fairly high price on the secondary market. It's worth haunting the online commerce site of your choice looking for a good deal, however, as Man-E-Faces is one of the best-executed figures in the entire line. Keep scrolling down for more photos(well, one more), and I'll see you next week! 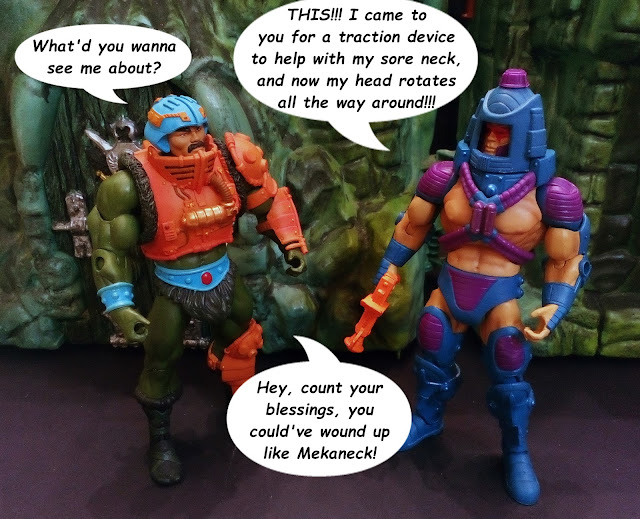