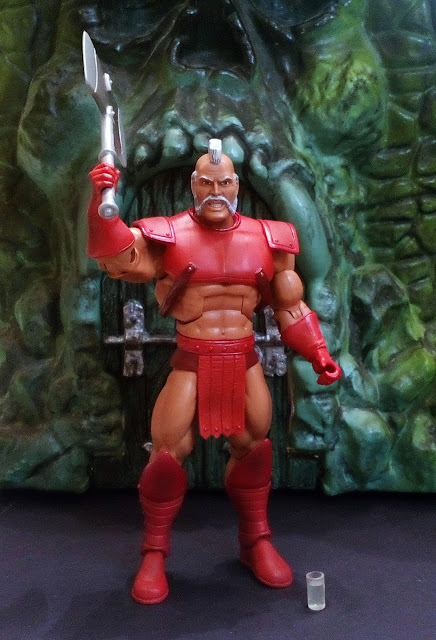 When it comes to MOTU media, I've always been more into the minicomics than anything else. These were the main source of information about who these characters where in the days before the Filmation animated show debuted, and some of my earliest memories are of looking at these pack-in comics, and having them read to me. Quite a few original characters were introduced in these stories, and it's a very rich area to draw from when considering who to make into new figures. While this wealth of characters is woefully under-represented in the MOTUC line, we did at least get one of the most interesting of the minicomic villains in Geldor. As a warrior obsessed with attaining immortality, Geldor sought the Secret Liquid of Life at all costs. He had a pretty impressive showing in the single story that featured him. He had some cool henchmonsters that resemble bipedal dimetrodons: 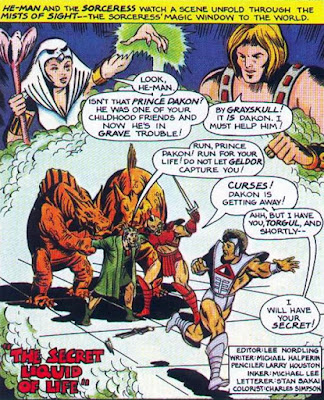 He had his own wizard with some killer eyebrows who was capable of some very convincing illusions to help further his goals: 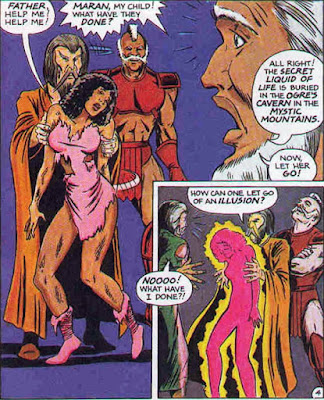 He poached Validus from the Fatal Five as a henchman: 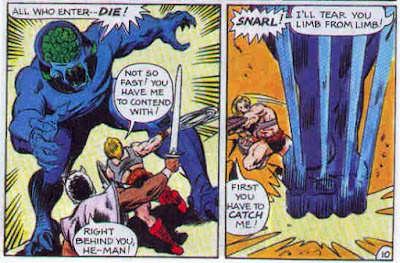 And he actually died at the end of the story, purely because He-Man is a big dick: 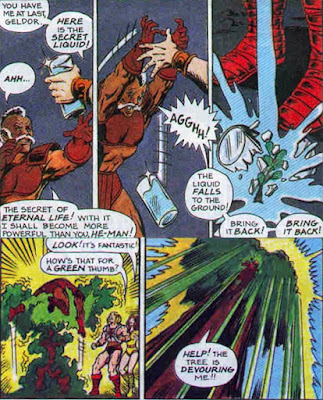 Really, dude? You're gonna drop the stuff on the ground, probably knowing full well what's gonna happen, then make a lame-ass joke while the guy's getting killed? That's some cold shit. But anyway, it made for a memorable character who was long overdue to be immortalized in plastic by the time it finally happened. The creators behind the comic also made a concerted effort to include more minorities in their stories, which can also be seen in Slave City and Double-Edged Sword. Considering how early in the '80s this was happening, they were kinda ahead of the curve. (As always, you can read these stories over at the He-Man.org archives.) 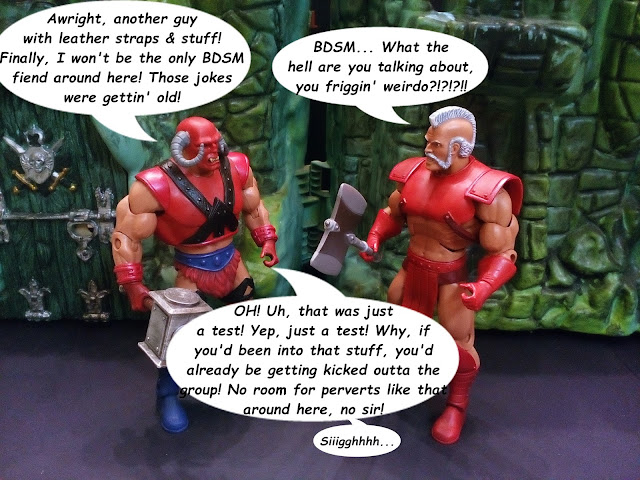 As with most MOTUC figures, Geldor makes use of the basic body, with the newly-sculpted parts he needs. He looks as if he stepped right off the page, as the Four Horsemen have nailed the character's look with their sculpt. He has a fierce facial expression that captures the character's ruthless determination. The loincloth and armor straps have a nice leather texture, and there are some rivets here and there in the appropriate spots. Thanks to the design of Geldor's armor, he avoids the "fat armor syndrome" that has afflicted far too many figures in this line. It would be nice if he had a spot on his armor to hold his axe, but for whatever reason, that didn't happen. 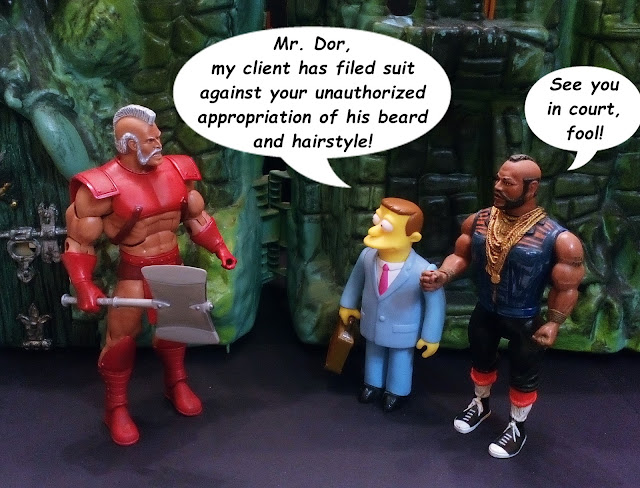 Geldor has the standard MOTUC articulation, with ball joints at the head, shoulders, and hips, hinges at the elbows, knees, ankles, and torso, and swivels at the biceps, wrists, thighs, boot tops, and waist. The ankle rockers are present, but very limited. As always, I'd like to have swivel & hinge wrists instead of the simple swivels the figure has. 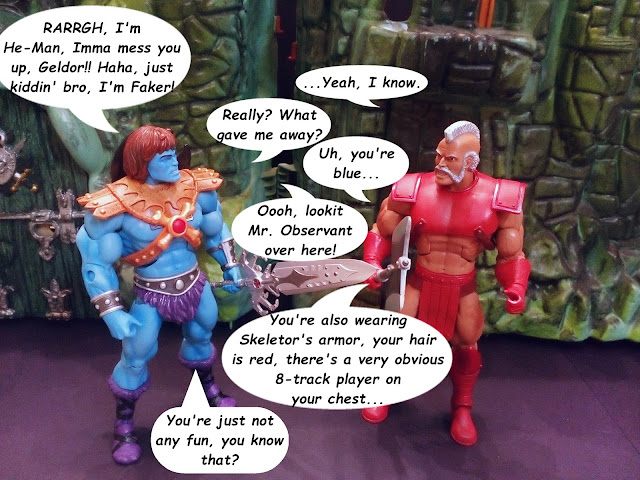 Paint apps are very neat, with little to no slop around the straps, and the face looks perfect. There's some nice drybrushing on the hair, and various shades of red, including some metallics, are used throughout the figure to make the very plain color scheme pop. There has been some discussion about his skin tone, and I certainly remembered him being darker, but looking at the minicomic, the skin tone they chose matches his appearance throughout most of the comic. My figure has a small defect on his chest armor, a black spot that appears to be contamination in the plastic used to mold the piece. It's not a huge issue, but it is unfortunate. Geldor only has two accessories, but they're straight from the comic. His axe is closely based on its design on the comic's cover, with some added detail and paint apps. The sculpt is a bit plain for my liking, but it is true to the source design. The other accessory is the Secret Liquid of Life itself! Unfortunately, Geldor can't actually hold it, as both his hands have openings that are far too small. Still, I always like getting accessories like this, and it'll be useful as a prop with many different figures! I would also liked to have gotten the sword Geldor is seen wielding in the comic, as he seems a little light in this department. 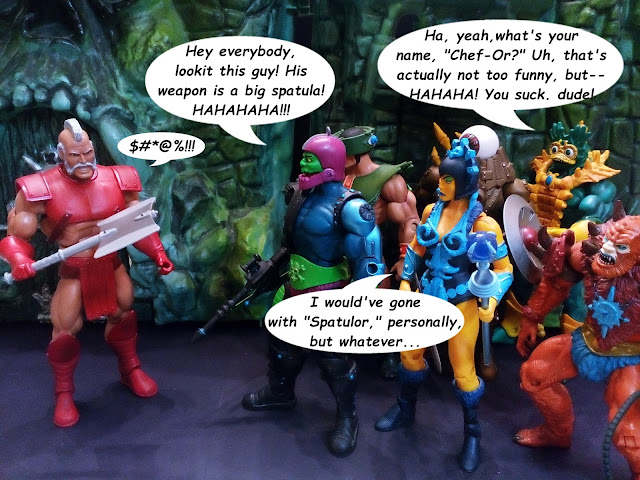 Geldor is far from an essential MOTU character, but lovers of the classic minicomics will be very happy to have him. He's also an independent villain, which is always a cool addition to the collection. (I think I'll have him allied with Skeletor, though; Now that he's seeking vengeance on He-Man, they have a common enemy. It seems sensible that Geldor would seek a powerful ally in his vendetta against such a formidable foe. As for Skeletor, he doesn't need Geldor, but he's always down to use someone else for his own ends!) He's not the most visually interesting figure, but he's a cool character with an interesting backstory, and his roots go very far back in MOTU lore. As with Lodar, Geldor is a "figure that should have been," and it's about damn time we got him in plastic form! He may seem rather bland to those unfamiliar with him, but this figure captures the character every bit as well as I'd hoped. That's it for today, but keep scrolling down for more photos, and I'll see you next week! 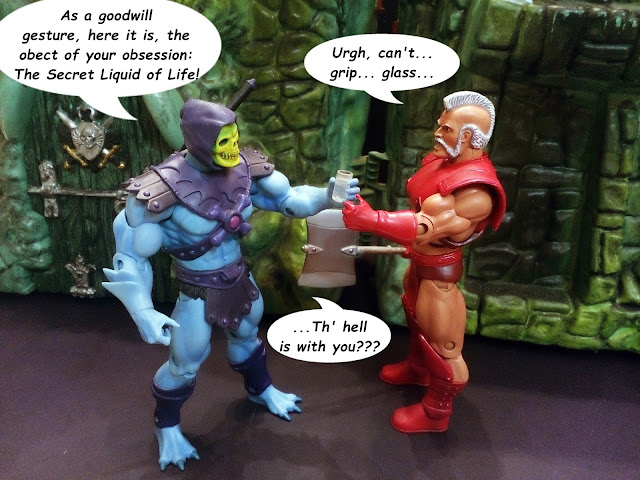 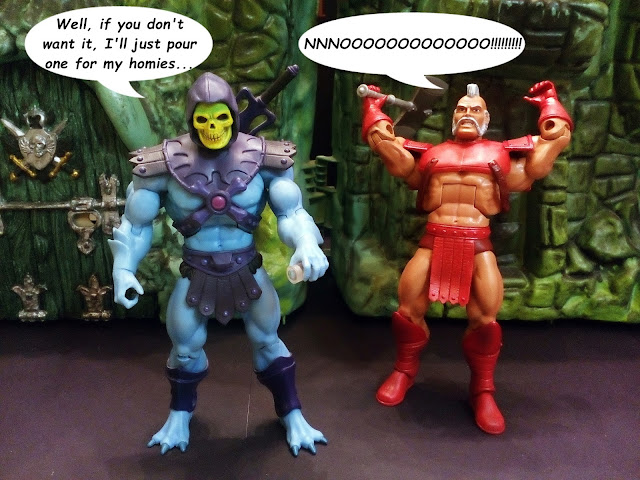