Situation: Hopeless. Solution: Z Comm!
Radical terrorists were plotting the ultimate coup. Their target: the mass annihilation of free world leaders at a summit conference in Venice. Their goal: the establishment of a global dictatorship conceived in blood and dedicated to the enslavement of mankind. Their first mistake: thinking the Z-Command would not interfere. Their last mistake: their first. 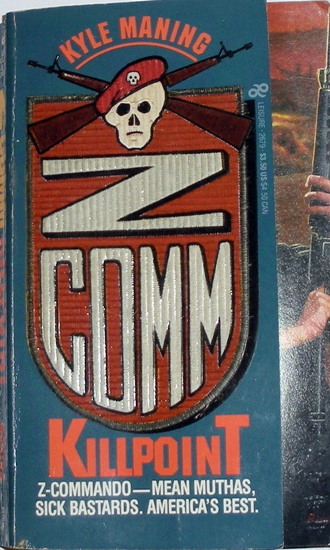 With that rather oddly-written description, we're off to delve into one of the most demented books I've ever read. Killpoint, the second novel in the four-novel Z Comm series, is credited to David Maning, a pseudonym for David Alexander. (I see that I have a book from the Alexander-penned Phoenix series on my trashy adventure novel shelf, so it'll be interesting to see if it measures up to the blood-splattered insanity of Killpoint.)  Z-Comm is a kind of grindhouse GI Joe, featuring characters from various branches of the military sporting often-goofy names tackling various terrorist threats, but with a tone that is decidedly geared toward exploitation. In other words, this book is crammed full of batshit insanity. After I read a passage in which a trio of terrorists shot a hooker to death while fisting her, I had to put the book down for a little while and wonder exactly what the hell I'd gotten myself into. If you like your crazy-ass novels lurid as hell, you need look no further than the Z Comm series!

The Z Comm members are team leader Logan Cage, martial artist Sam Proffitt, professional big mean bastard "Bear" MacBeth, expert thief Harry Zabriske, and obligatory tough, uber-sexy female Domino Black. It bears mention that MacBeth is frequently described as bald throughout the novel, yet none of the team members are bald on the cover art; likewise, Domino is wearing an eye patch on the cover, yet there is no mention of this anywhere in the novel. The team is up against the middle-eastern terrorist group of the man known as the Vulture, whose goal is to blow up Venice during a peace meeting attended by the President of the US and the Soviet Premier. But basically, the entire book consists of scene after scene of terrorists massacring large crowds of people in various horrible ways, followed up by Z Comm killing lots of the terrorists in turn.

The Vulture is one nasty bastard. He and his henchmen, who are frequently referred to as "camel humpers," "scum sheiks," and "terror guys," rain violent, bloody death on large groups of people again and again throughout the novel. Seriously, people die by the goddamn hundreds in this book. So many people die that it barely matters that the Z Comm team technically accomplishes their mission, as there must have been all of 30 people left alive in Italy by that time.

A few choice scenes involve Italian mafioso Ugliano. The Z Comm teams busts in on him while he is busy getting it on with a transsexual, and proceeds to interrogate him. When he returns to his house with intent to evict the Vulture from the premises, Vulchy turns the tables; while his men restrain Ugliano, Vulture slits a lamb's throat, and the blood washes over Ugliano. Alexander is sure to inform us that the blood somehow fills Ugliano's asshole. I don't know how the hell that works, and I'm sure I don't wanna find out.

The writing is no better than you'd expect, but it does keep the novel moving at a good clip, even through all the page-filling passages describing the countryside and the weapons the characters use. Alexander's terrorists are complete caricatures, but he does capture the mindset of absolute fanaticism quite well.

A few choice quotes:
"May you swim for eternity in flaming lakes of diarrhea!" - a random "terror guy"
Bear knew he stuck out in the Plaza of the Crazies like a hard-on in a room full of nuns.
"Shake your shit and get on the tit!" -Cage, for no discernible reason

As a bonus, here is the full cover art, revealed in all its glory when you open the front cover flap. 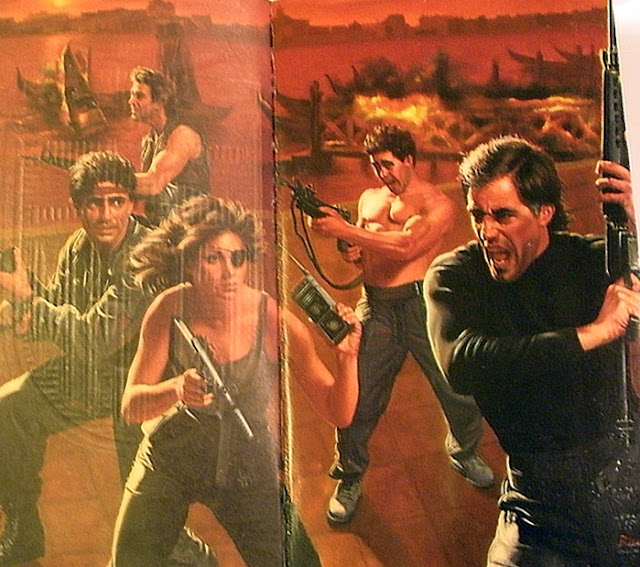 HOLYSHITJESUSFUCK What the hell is wrong with that guy?!?!!? 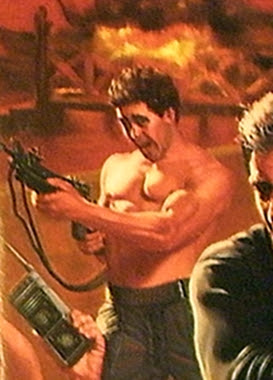 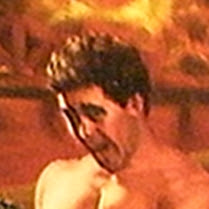 I can't possibly follow that up. Can the next book possibly match the fever dream that is Killpoint? Find out next time!