I'll tell ya what, I was sold on this one the moment I saw the cover. 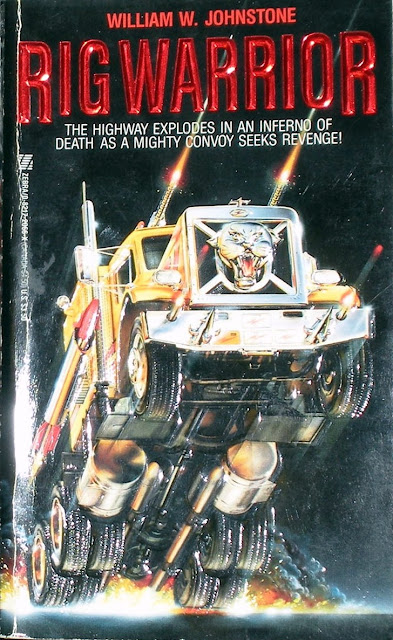 "Barry straightened and looked around him. No witnesses. Good. The dimly lit parking area was void of human life. Not counting the shitheads on the asphalt. And Barry didn't count them as human." Meet our protagonist, Barry Rivers, a.k.a. Dog. No, really! His CB handle is Dog. Rig Warrior is the work of prolific author William W. Johnstone, no stranger to action novels. Barry Rivers-- a Vietnam vet, as required by the law of men's adventure novels-- is a weapons salesman with a thriving business who enjoys kicking the shit out of random street punks whenever the opportunity arises. Barry gets wind of the trouble his father, Big Joe, is having down in New Orleans with the Mafia trying to take over his trucking business. Barry heads down to deal with the situation, and it quickly becomes clear that the whole mess is far bigger and nastier than anyone imagined.

The story eventually encompasses a shady government program that is performing horrific experiments on Vietnam veterans who suffer from PTSD, along with illegal Mexican immigrants of all ages, homeless people, and pets for good measure. This book really wants us to hate scientists, as the horror of these experiments is repeatedly hammered into the reader, and we're reminded that it's all for the benefit of science. Apparently all scientists are evil sadists who enjoy performing horrible acts on people and animals. Who knew? On top of that, the dead bodies are used to smuggle cocaine once the eeeeeevil scientists are done with them. Even further on top of that, Dog and his loyal truckers are being set up to take the fall! And even higher up, on the tippy top of that, the man behind it all is one of the people Dog trusts most!

This novel functions largely as an origin story, setting up a series centering on Dog and his dog, Dog. That's right, vigilante trucker Dog has a dog named Dog. You can't make this stuff up! (Well, uh, I guess you can, but it's pretty damn goofy.) The main plot is abruptly abandoned near the novel's end, and the new status quo is established. The pair of Dogs drive off into the sunset, armed to the teeth, looking for punks and thugs to snuff out.

Barry/Dog is a typical adventure novel protagonist; he's tough, seems to secrete a musk that causes all women in his immediate vicinity to shuck their undergarments, and as mentioned, he's a Vietnam vet. We're reminded often of his "Cajun temper," and he despises all lawyers, even though his most trusted friend is-- any guesses?-- his lawyer. Naturally, he despises the criminal justice system, and we are reminded every couple of pages that the laws exist to protect the criminals, not the innocent. Here's a nice quote to that effect, when we discover that the truckers will carry their illegally owned firearms no matter what: "As should be the case for any taxpaying, normally law-abiding citizen who knows the law is slanted toward the criminal and against them." We're frequently reminded that it's all the fault of all the liberal bureaucrats in the government, those criminal-loving, pencil-pushing dickheads!

Barry is no slouch with the ladies either, of course. We're told that he has several regular lady friends in his city of residence, including Linda, who works for the Treasury. When Barry hosts her for dinner, it doesn't take long for her to succumb to Dog's irresistible charms: "The dinner had been very good, and dessert was even better; took two to consummate it." Whew, anyone else all hot and bothered after reading such masterful innuendo? Then there is Kate, who is described as "an angel with a garbage can for a mouth." Kate drives for Big Joe's trucking company, and don'tcha know that all the other truckers-- with handles such as Beer Butt and Panty Snatcher-- are always trying to get into her pants to no avail, but she just can't resist instantly falling for Dog! The two of them actually get married, however, which is definitely a bit surprising in a novel of this genre.

Rig Warrior isn't particularly well-written. Sentence fragments are often presented as if they are full sentences, sometimes even as an entire paragraph all on their own. There are also several instances where Johnstone just flat-out used the wrong damn word; my favorite is "Something he merely suspicioned?" There are the expected typos, as well. These are things any halfway decent editor should have caught. For all of that, Johnstone keeps the narrative moving at a rapid pace, so the reader never really has a chance to get too hung up on the book's flaws. The Rig Warrior series apparently only ran for two more installments, and I'll try to get my hands on them to see if they surpass this introductory novel, which manages to entertain despite all its shortcomings.