Happy Whacking Day, everyone! The month-long Whacking Day event in the Simpsons: Tapped Out game has ended, but today is the actual date of the holiday. Speaking of the game, how did everyone do? I finished getting all the prizes a week or so ago, and managed to get the final Whack Box Wednesday night, just under the wire. (For those of you who don't know about the Whack Boxes, they're no big deal. Once you got the final Whacking Day prize, you won a Whack Box for every 1,000 snakes you whacked after that. You either got money or up to three donuts, and the money, obviously, was far more common. I got a total of four donuts out of the ten Whack Boxes.)  It's possible that there will be something special in the game today, but as I'm writing this section of the post early Friday morning, it hasn't happened yet!
Edit: Of course, soon after this posted and I opened the game again, I saw that the level 29 update had arrived. Additonally, Whacking Day has been extended until the 16th! Good news for those who still don't have all of the prizes. Get back to whacking! 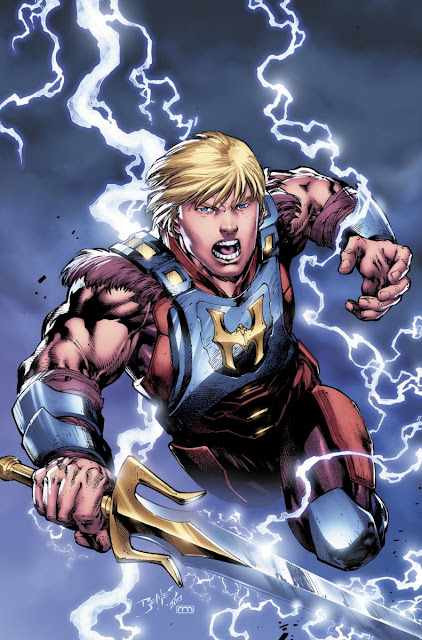 There's been a lot of grumbling around the 'net over DC's announcement that He-Man will be getting a new costume in their Masters of the Universe comic this summer. (I find the Ed Benes art far more disagreeable than the new costume, but whatever.) Much of the dismay is directed at He-Man's swanky new pants. I've seen a ton of bitching, mostly by people who, by their own admission, don't even read the comic. There have been a couple of valid points made, but everyone seems to have forgotten a few things:
1. This is not permanent.
2. This is not the first time He-Man has worn pants. The character will miraculously survive.
3.  The costume is an updated version of the classic Battle Armor He-Man, so it actually has a basis in classic MOTU lore. (Yeah, the old BA He-Man toy didn't have pants, but the design is the obvious basis for the new costume.)
4. The whole thing is stirring up some interest in the MOTU comic, which is a good thing, since it's a pretty good comic that has been unjustly ignored, for the most part.
5. This "controversy" is pretty dumb, even by internet argument standards.
Everyone just needs to take a few deep breaths and relax. Everything is gonna be okay(well, as okay as things ever are). And for the people I've seen complain that the new design is a sign that DC is getting ready to integrate MOTU into the main DCU, and that we'll see He-Man on the Justice League before the year is out, I say that I'd be thrilled by that, honestly. I seriously doubt that's gonna happen, but I'd love it if it did.
Edit: And now, this news has broken. Masters of the Universe vs. DC Universe kicks off in August! I really thought this was too much to hope for, but it's happening! C'mon, DC, put Teela or He-Man on the Justice League when this is over!

Here is a novel from 2006 that features WWE wrestlers working as secret agents for the government. It sounds so awful that it has to be great! I have no idea how it existed for this long without me hearing about it. 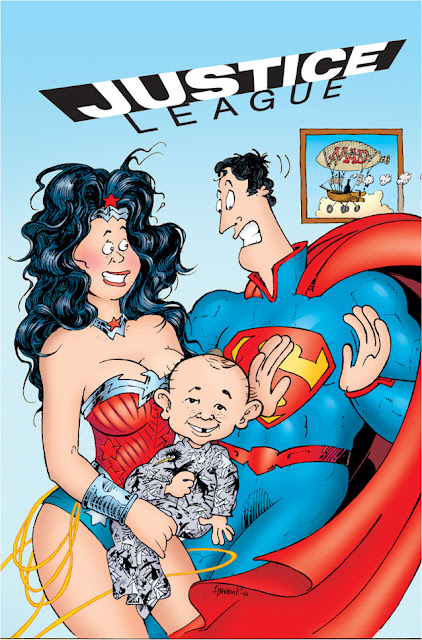 Free Comic Book Day was a resounding success, and our local shop was much busier than we've ever seen it. We arrived at about the same time we did for last year's FCBD, and the store was at least twice as crowded! It's great to see it grow bigger each year. I picked up most of the free comics I wanted, and snagged the Sergio Aragones variant cover for Justice League #19 for $3! I normally can't manage to give a damn about variant covers, but this one was a must-have. Lunch at one of downtown Hattiesburg's great restaurants followed, then visits to a couple of the thrift stores I enjoy diving into so much. I picked up some nice fodder for future Trash Rants, so consider this your warning. ;)

After all that, we went to see Iron Man 3. While I am sure there are many hardcore Iron Man fans who are royally pissed about the big reveal, I thought it was a fun movie overall. It had the requisite plot holes and shortcomings that you just have to ignore in the name of enjoying most action movies(most movies in general, really), but there was one in particular that was so huge that it just bugged the hell out of me. This is gonna involve a spoiler, so highlight the text if you wanna keep reading. Tony had dozens of fully functional suits of Iron Man armor ready to go at a moment's notice, so why, exactly, did he wait to use any of them until the ned of the movie? There were several times where he was well and truly fucked, not to mention the times other people were as well, and he couldn't be bothered to summon a suit of armor. Obviously, the reason he didn't was plot convenience. It wouldn't have taken much- just a line to explain why he didn't or couldn't summon the armors earlier than he did-- to smooth the hole thing over. Like I said, I'm accustomed to ignoring plot holes as long as a movie is fun and generally well-made, but this one really stuck in my craw.
All that aside, it was a fun movie that didn't measure up to the first IM film. Regarding all the rumors that RDJ may not return to the role over payment disputes, Marvel/Disney need to just give him whatever he wants to continue. Most of the other roles can be recast without too much fuss, but they need RDJ to be Tony Stark for as long as he is willing to do it. The first Iron Man movie took a character who was a solid B-lister, not to mention a complete unknown outside of comics readers, and made him a huge star and a solid A-lister practically overnight. So much of that is due to RDJ's performance and charisma, and the movies-- and their profits-- will take a huge hit if and when he departs. Marvel Studios needs him far more than he needs it. That said, the rest of the cast and crew are due some serious raises, with the kind of insane profits these movies are making. It's disgusting that co-stars such as Scarlett Johansson and Jeremy Renner made so little for The Avengers when RDJ and the studio is raking in so much.

Anyway, rant over for now. I've still got a good bit of stuff to move back in, so I'm out for today.
Posted by Waylon Piercy at 1:00 PM