I'm still in the middle of packing up all my worldly possessions, so things are pretty hectic around here. This week's column is again a bit on the short side as a result.

To kick things off, here's the trailer for Saints Row 4, which was released last Friday(after I already had that week's post up). It looks appropriately insane. I friggin' love that you're the president of the US in this game! Hopefully we'll be able to bling the fuck out of our White House crib. 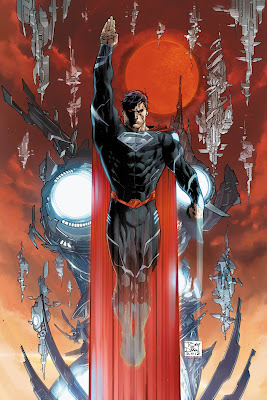 What the hell is going on at DC? Wednesday, we discovered that incoming Action Comics writer Andy Diggle has left the book, while Joshua Hale Fialkov has left the Green Lantern books he was slated to write. The first issues of their respective runs have yet to even ship. Yesterday, the rumor made the rounds that Fialkov's exit was due to his objections over an editorially-mandated edict to kill John Stewart.  Writers leaving books over creative differences is nothing new, but there has been an unusually high occurrence of such conflicts since the DC New 52 relaunch. Frankly, DC editorial seems to be a bit of a mess, and that's not good for the line. It results in some poorly-written books, and that screws the readers who spend good money on them. I still enjoy a good many DC books, but all too many have been negatively affected by such issues in the past couple of years. There is one editor in particular who is involved with several of the books that have had these issues; one wonders if he might be the problem. Whatever the case may be, I hope DC editorial can get its act together a little better.

Here is an awesome story about the 1400 pound block of cheese President Andrew Jackson received as a gift, and how he disposed of it. This is a must-read.

This dude has figured out a way to grow pears that are shaped like baby Buddhas. That just rocks on so many levels.

I leave you with this animated Calvin and Hobbes strip, made by animator Adam Brown. Brown wisely chose a strip that is silent, so you don't have to worry about being weirded out by suddenly hearing a voice for Calvin.