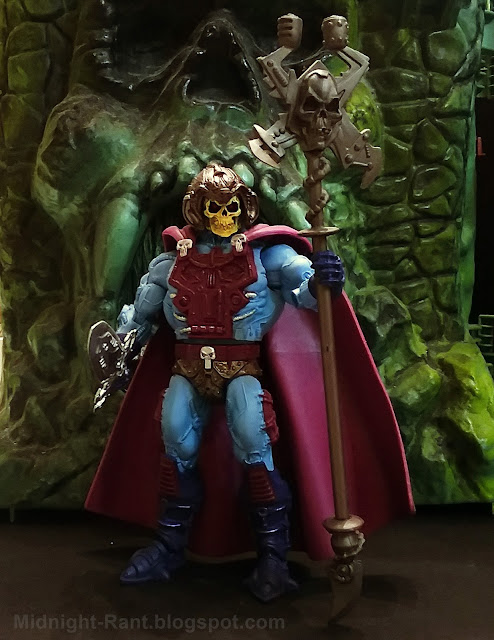 In today's review, we return once more to the most maligned corner of the MOTU universe: New Adventures! Like many MOTU fans, I wasn't too enamored with NA when I first saw the figures on the pegs back in 1989. As much as I missed MOTU, and wanted more, this just wasn't MOTU to me. The toys were completely different from a stylistic standpoint, and virtually none of the familiar and beloved characters were present. It felt like a poor man's Star Wars with my beloved Skeletor and He-Man wedged into it, complete with new looks that didn't measure up to the classic ones. Full of the sort of bitterness that can only be summoned by a child, I turned my back on the new toys, resigned to the death of my favorite toyline. 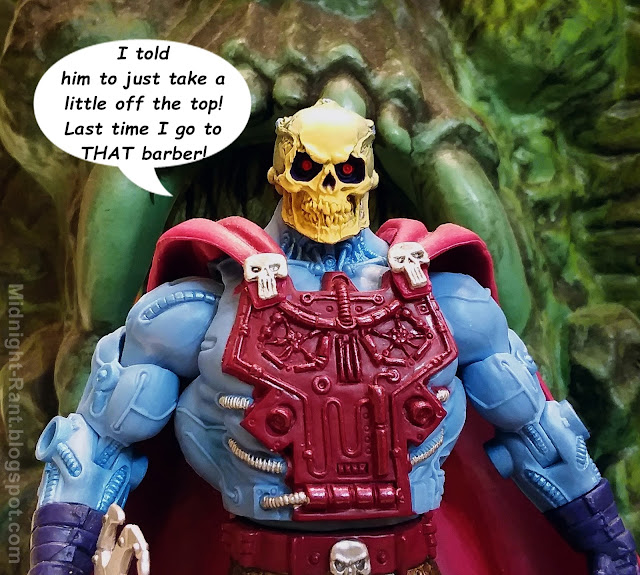 Obviously, I have a much more positive outlook on NA these days. (My review of Optikk makes that clear.) The Four Horsemen work wonders with their designs, and their takes on the handful of NA characters we've gotten in the MOTUC line have resulted in some of its coolest figures. Prototypes of the NA version of Skeletor were absolutely awe-inspiring, and this looked to be the figure of the year. The released version, sadly, falls quite a bit short of that promise. 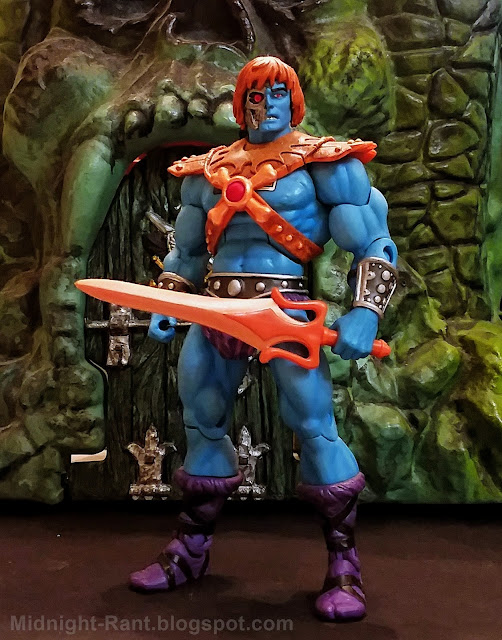 I'll say this first: The sculpt is fantastic. There is intricate detail covering the figure from head to toe, so much so that many collectors feel he looks out of place in this line. While I love extremely detailed sculpts such as this, he does have much in common with the detailed sculpts of the 2002 MOTU line. Personally, I think the sculpt is phenomenal, and I wish there were far more figures in the line with this level of detail! Looking over the figure, you'll find intricate circuitry and metal parts everywhere, even lurking underneath the figure's helmet, and behind his cape. IG Skeletor would be a strong contender for the greatest figure in the entire line if not for one problem that reared its ugly head with frustrating regularity in this line: The dreaded Mattel design team. 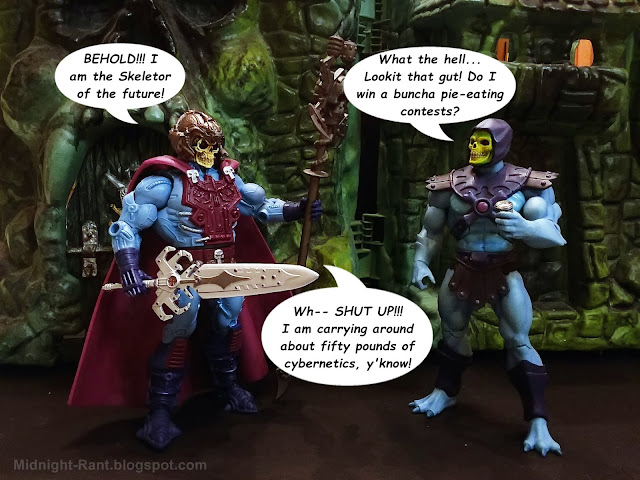 Mattel's designated designer took the incredible Four Horsemen sculpt and decided that this figure would have a torso overlay, rather than a new torso. This technique has been used since the early days of the line to keep costs down, and a certain designer seems incapable of designing these overlays in such a way that they work properly. This has led to the "fat armor" syndrome, as well as figures with the inability to relax their arms. Unfortunately, IG Skeletor has what is quite possibly the worst case of FAS I've ever seen. The overlay is ridiculously bulky, and making matters worse, it goes all the way to the top of the figure's neck, so that he is stuck permanently looking down. This also renders that particular point of articulation a swivel joint, as the overlay restricts all other motion. On top of that, it leads to some awkward moments when the navel on the torso shows underneath the overlay. The overlay is supposed to be Skeletor's body, not armor, so this is even more odd-looking than it usually is when it happens to other figures. (Poor IG Skeletor not only suffers from FAS, but also DBS: Double Belly Syndrome!) This figure has a lot of new tooling, so I can understand the desire to cut costs, but this is Skeletor. He's the main villain of the entire MOTU mythos. He's probably the most popular of all MOTU characters. This is not a figure to cheap out on. The fact is, this figure needed a newly tooled torso to be done properly, and that is what Mattel should have done. Their cost cutting has reduced a figure that should have been a perfect 10 to a 6 or 7 at best. There are various tutorials floating around the net on how to alter the figure's torso overlay to make the figure look much better, and you better believe I'll be going that route. This figure is too amazing overall to be held back by a poor design decision. 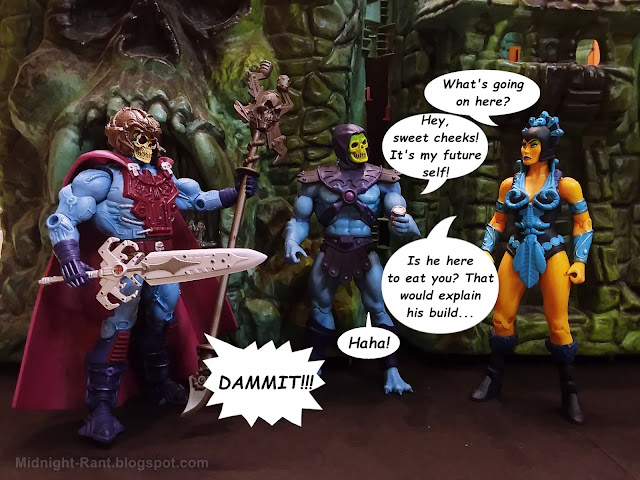 Paint apps are pretty good overall, with lots of the small details painted in, and a nice metallic blue used over much of the circuitry on the "skin." There are a couple of areas where the paint doesn't quite cover the entire piece of circuitry, but that can be easily fixed, at least. Articulation is a bit different than usual, owing to the torso overlay. The ball-jointed head becomes a swivel head, as mentioned above, and the torso hinge is rendered immobile unless you're reeeeeaally motivated to use it. (The back of the overlay is shaped to avoid blocking that joint, so my figure may just have a stuck joint. Even if it could move, the cape would get in the way.) The wrist swivels are at the tops of the gloves, rather than the hand plugging into the end of the wrist. Everything else is standard, with ball joints at the shoulders and hips, swivels at the biceps, thighs, calves, and waist, and hinged elbows, knees, and ankles. 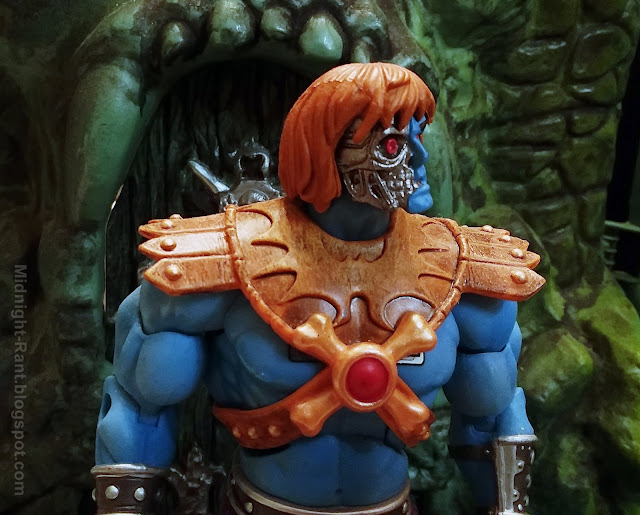 Accessories include his helmet, if you count that, an alternate head, and his Havoc Staff. The staff is a perfect update to that of the original figure, right down to the odd creature clamped onto the back of the skull. With a blade on one end and what appear to be electric prods on the other, this incarnation of the Havoc Staff looks like a very nasty weapon! The alternate head is not for Skeletor himself, but for Faker. This is the much-requested battle damaged Faker head that fans have wanted since at least the 2002 days, and it's awesome to finally have it! The non-damaged half of the head is a very good match for the original head sculpt, and the skeletal half has some great details. The only issues with the head are with the paint. It was molded in silver with the other parts painted in, but they neglected to paint the teeth. This doesn't really bother me, but it has been an issue for some collectors who want the undamaged side to match the normal Faker head perfectly. Thankfully, this is very easy to remedy if it bothers you. The other issue is with the hair, which is a completely different shade of orange, without the paint wash that is present on other Faker heads. It's basically emulating the vintage colors, and it looks fine on the figure, but it will be a bit odd if you display this head alongside one of the standard ones. I do prefer the darker reddish-orange with  the blackwash, but again, this isn't really a problem for me. (A bigger issue is the very obvious mold line on the hair piece!) It would be nice if Skeletor had included a sword of some type, but I find that the 2002-style tech sword of power looks great with him! The only problem is that I had Faker wielding it until now... now he needs a new weapon! 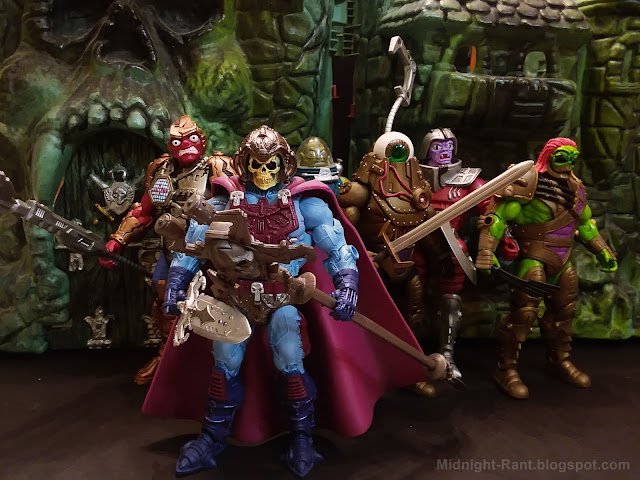 Ultimately, IG Skeletor is a divisive figure. That great sculpt is marred by poor design decisions, but there is still so much that is awesome about this figure. I'm annoyed that I'll have to go to significant trouble to correct the design team's error, but this is a cool enough figure that I think he's worth it. Whether or not that holds true for you, or if you feel capable of taking those measures to improve the figure, is a decision only you can make. I do recommend snagging one if you find him for a decent price, and see if he grows on you despite the design issues. If nothing else, you'll get a cool extra head for Faker. That's it for today, but be sure to swing back by in two weeks for more! And there just might be a bonus feature next week, so be sure to check back for that! (I'm not being coy, I'm really not 100% sure I'll have it ready by next week. I'm gonna try, though!)  In the meantime, have a great Thanksgiving! And if you don't celebrate Thanksgiving, then have a great Thursday tomorrow anyway! 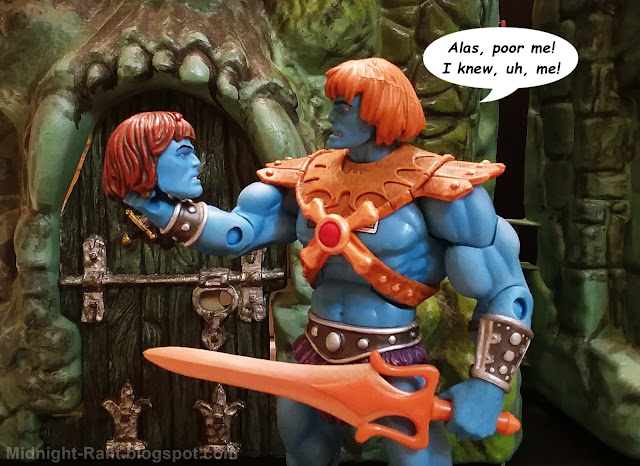 Here's a bonus version of one of the Faker pics from when I was screwing around with the colors and wound up with a slightly unsettling reverse colors version. 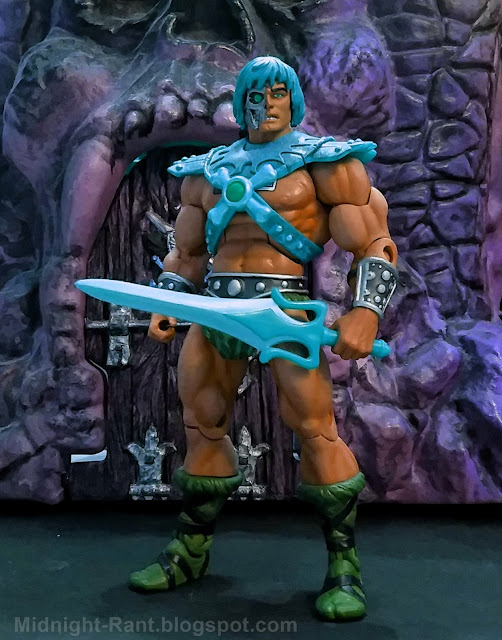